Developer Frogwares has been doing justice to Sherlock Holmes for quite some time now with a series of adventure games that manage to faithfully represent one of the most famous detectives in literature. That said, some of these games, like The Devil's Daughter, stumbled due to design choices that didn't fit well with the rest of the experience, such as an abundance of Quick Time Events and flawed action sequences.

Sherlock Holmes The Awakened, a Remake of the 2006 Game, Will Be Funded via Kickstarter

Sherlock Holmes Chapter One is indeed the very first chapter in Sherlock Holmes' story. Having moved back to London after his mother's death, Sherlock journeys back to the isle of Cordona where he lived with her and his brother Mycroft seeking closure. Violet Holmes' death clearly left him traumatized, as Sherlock has trouble remembering what really happened to her before her death, so his journey back to the island is meant to finally allow him to close a chapter of his life and move forward.

Things are, obviously, not as simple as a death caused by tuberculosis, as Sherlock remembers. A quick trip to Cordona's cemetery and a chance encounter with artist Vernel Vogel, who acquired some of the items left behind by the Holmes in their manor when they went back to London, make Sherlock realize that he has to investigate further to discover the truth and finally set his mind and heart at ease.

The Sherlock Holmes Chapter One's story is definitely among the game's best features. The main case involving Violet Holmes' death is exceptionally well-written, providing new clues with each new development while keeping the player hungering for more. It has the right length, too, clocking at around 15 hours. All the other story-related cases are not only quite varied and just as well-written as the main one, but they also flow into one another quite well, making the entire tale coherent so that nothing feels out of place in the grand scheme of things. Cases that are not required to complete the story aren't as well developed, but they do their job well, allowing players to learn more about the isle of Cordona and its unique history.

Character writing in Sherlock Holmes Chapter One is as strong as the case writing is. Sherlock Holmes is fascinating in this younger form, arrogant and a little brash, but with those signs of brilliance that will let him become a peerless detective. His interactions with Jon Watson are also great, considering they provide another in-depth and sometimes surprising look at the detective, as he is not a real person but an imaginary friend that Sherlock believes has been with him his entire life. Jon's constant presence and witty remarks only add more value to the tale, and his ultimate fate results in yet another very interesting development for Sherlock Holmes as a person and as a detective.

While Sherlock Holmes, and Jon to an extent, are the true stars of the show, the other characters are just as well written and varied, ranging from eccentric artists and determined archeologists to overworked police officers and more. Some of the characters are also not what they seem at first glance, and it's only through Sherlock's excellent observational capabilities that players will be able to see through their facades. At the end of the day, all these characters contribute to the memorable story.

If the Sherlock Holmes Chapter One story, while good, doesn't exactly attempt to go beyond the boundaries set in previous entries in the series, the gameplay experience definitely does, with the introduction of a fully explorable open-world setting.

After clearing the very first introductory case, players can freely explore the isle of Cordona, moving from one part of the island to another without any limitation in search of items to find. That includes new clothes for both Sherlock and Jon, items that can be used to decorate Sherlock's mansion, a variety of collectibles, as well as optional cases and Bandit Lairs, which come with their own set of challenges. Bandit Lairs become available right after learning the basics of combat, which is the biggest new introduction to the formula seen in Sherlock Holmes Chapter One, outside of the open-world setting.

On paper, the addition of combat in a Sherlock Holmes game feels entirely out of place. Still, in reality, the addition is decently thought-out and feels coherent with the world of Sherlock Holmes, as taking down enemies requires the detective to use the environment to his advantage and analyze the enemies to highlight armor and weak spots. It is a simple system that works decently enough, although it lacks depth and essential features like a hit indicator highlighting from where Sherlock is being shot.  While it does provide a pleasant diversion from all the investigation action, there isn't a whole lot of combat during the main cases and it can be turned off entirely so those who feel like it does not belong in a Sherlock Holmes game can have it their way and not shoot a single bullet for the entirety of the adventure. This option is quite welcome and a far cry from the forced action sequences and QTEs seen in The Devil's Daughter that became one of the game's biggest flaws.

Making combat optional is a sensible design choice as Sherlock Holmes Chapter One doesn't feel like it needed much diversion to begin with since the investigation mechanics are entertaining and the cases themselves rather diverse.

Sherlock Holmes Chapter One features many of the investigative gameplay mechanics seen in previous entries in the series. During the investigations, Sherlock will have to look for clues in set locations, recreate crime scenes and put facts in correlation via the Mind Palace to help him reach a conclusion that will have consequences shown to the player after the case has been closed. The difference is in how Sherlock will now have to move from one location to another in Cordona to solve cases, taking advantage of Police and Newspaper archives to gather information needed to find people of interest and learn more about past events, and even disguising himself to gain access to otherwise locked locations. While the introduction of the open-world setting could have brought a variety of issues like pacing, Frogwares did a masterful job in making the entire experience feel tight. The open-world features feel like a natural step forward for the series and not a forced addition made just for the sake of it. The collectible hunting and the Bandit Lairs, although somewhat integrated into the story, do feel a little "gamey", but, since they are optional, they do not impact the experience negatively in any major way.

The introduction of combat and open-world features in Sherlock Holmes Chapter One, while definitely made to appeal to a broader public, didn't really impact what made the series what it is in the first place. Players should expect to find only minimal handholding throughout most of the adventure. While it is possible to highlight points of interest at any time during an investigation, it is up to players to connect the dots and recreate crime scenes properly. Thankfully, the game provides all the information players need to do so correctly, so you'll hardly get stuck in a case if you read the casebook carefully. Additionally, the game features difficulty customization options for investigation and combat to make the entire experience as accessible as possible without watering down the investigative challenges.

Sherlock Holmes Chapter One also doesn't disappoint when it comes to visuals, although the game cannot compare to major AAA productions in terms of advanced tech and polish. All character models look detailed enough, and animations are decent if a little stiff. The city of Cordona looks great and lively thanks to the huge amount of NPCs walking around at any time. A competent lighting system nicely complements the day and night cycle.

Performance is decent, as the game had no trouble running at 4K@60 FPS with max settings during most sequences, including open-world exploration with multiple characters on-screen on the system used for the test (i7-10700 CPU, RTX 3070 GPU, 16 GB RAM). The game is also bug-free for the most part, as I haven't encountered anything significant in my time with the game, outside of some weird NPC behavior every now and then.

After having had the chance to play Sherlock Holmes Chapter One twice before its launch, I had a pretty good idea of what to expect out of Frogwares' latest game, but the final release exceeded my expectations with a great story and engaging gameplay. The open-world features fit the series more than I expected, resulting in an experience that feels bigger without becoming dispersive. The combat is largely inoffensive and could become one of the series best features with some tweaking and increased depth. Sherlock Holmes Chapter One is truly the first step in a new course for the entire series, and I am quite curious to see how Frogwares will build upon this solid foundation. 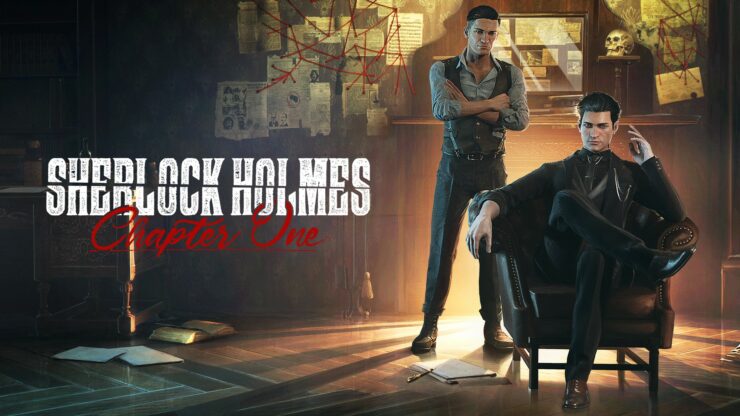 Sherlock Holmes Chapter One is one of the very best series installments, thanks to a great story powered by solid writing, charming characters, varied cases, and new open-world gameplay mechanics that fit incredibly well. While some of these mechanics do require a little tweaking, such as combat, Chapter One is a very solid game that no fan of the series or adventure games should pass on.