Subsurface Circular is a game with an amazing name. Seriously, not only does it look like the most sci-fi name I think I could possibly imagine, it's so much fun to say. Go on and say it out loud, feel the way your mouth so naturally makes the shapes it's like these words are destined to go together. Beyond its name, Subsurface Circular is a detective game housed entirely inside a circular metro route (hence the name).

Subsurface Circular does a lot, it'll constantly keep you thinking despite its lack of interactivity. You’re a detective, and your task is to solve a crime which may or may not have occurred. 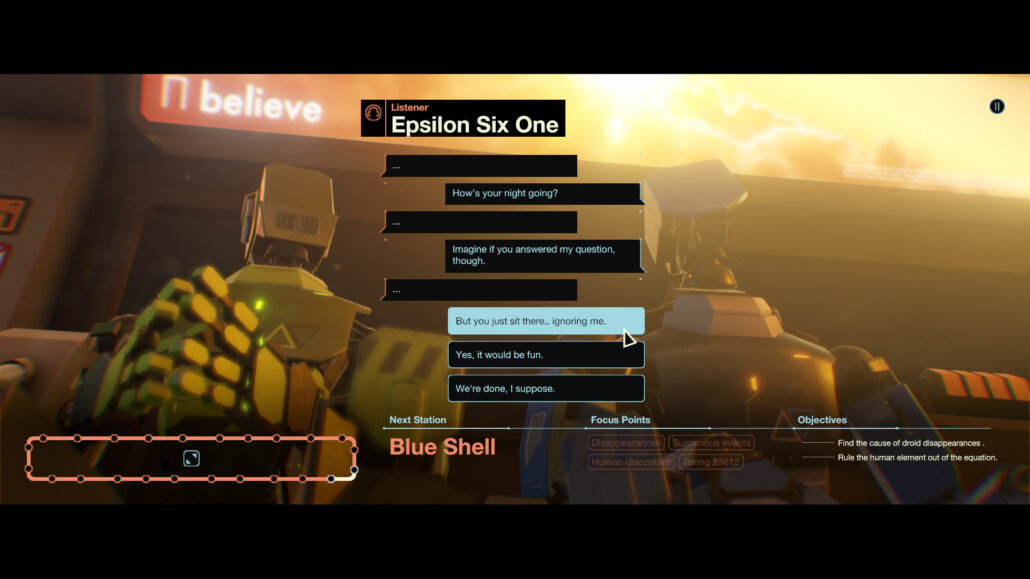 Despite the fact that your avatar remains sitting for the entirety of the game, it delves into a lot of serious questions, but like all good science fiction, it does so in a non-threatening, fantastical way. Although a lot of Subsurface is dedicated to near future philosophy, some of the questions it raises are a lot closer to home.

The game at times feels like it's posing a philosophical conundrum. Like the infamous trolley problem, made more relevant by the speeding Subsurface metro, the game feels like a set up for an ultimate and impossible question.

That being said, the format of the game is perfectly framed. As I said before you are a detective questioning the random strangers that happen to sit next to you, which gives you a great vertical slice of the society this game portrays. Like any public transport, the cast of characters you can find on it is the tapestry of the city, except in this case they’re also all robots.

Getting to speak to each of the characters fills in the story, but also hints at a world larger than the metro you’re riding. Bithell has done this in other games, letting players glimpse just enough of the world outside the narrative to be intriguing, but Subsurface is his best effort yet in this regard. There is a history here, and a present, and dreams of the future, all tinted by the characters telling it. If nothing else, it’s a wonderful example of the joys of meeting strangers.

Through the power of the Nintendo Switch, you can conveniently hide away from speaking to anyone on public transport by playing Subsurface instead. We all know that while everyone uses public transport, the only ones that strike up conversations are probably worth avoiding. Subsurface on the Switch is by far the best platform for the game. Despite its short nature, you can pick it up and put it down between conversations with ease. The graphics aren’t spectacular, but nor are they very important when the game is entirely focused on conversation, and it's still easy to read on the big and small screen. The character animations are a little janky, but it sort of adds to the charm of these awkward robot characters clopping around. 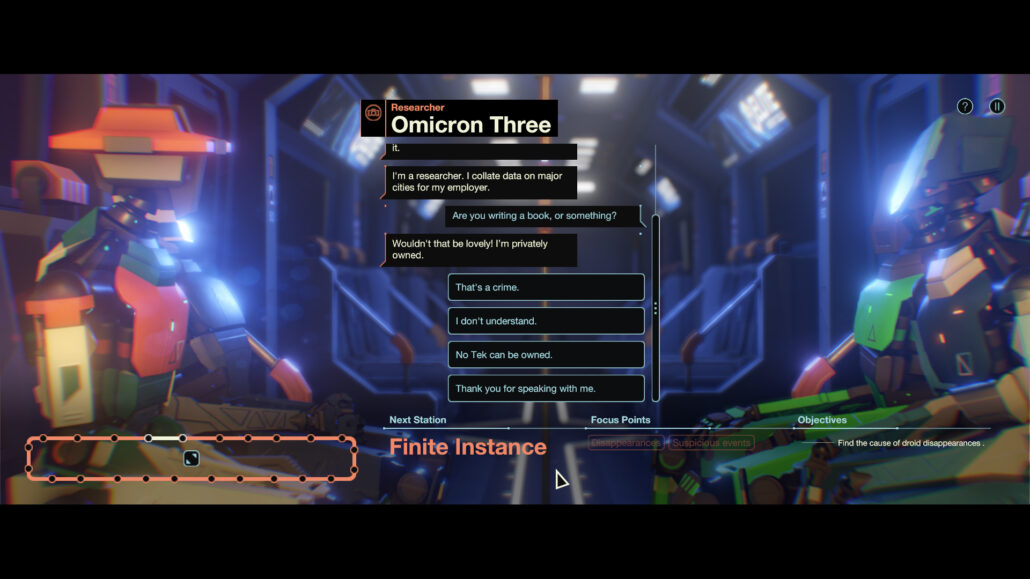 There are more issues with Subsurface than just some jerky robots though. While some of the social puzzles that litter the conversations are really well produced, others are a bit hit and miss. Puzzles are normally about gleaming information from one conversation to use on another, but they feel vague and unintuitive. One such puzzle involves affecting the mood of one robot to influence another. It's an interesting concept to be sure, but when you’re not sure how each emotion is going to effect to the conversation, you just have to try each one in sequence until you get the answers you need. But like I said most puzzles are nicely staged, and some even made me grab my notebook to solve, which in my opinion is always a good sign. Subsurface even gives you support if you need it for these creative puzzles, allowing you to turn on an assist mode if you’re feeling stuck. This is all done within the lore of the game so you never feel like you’re cheating if you want a little extra help.

Subsurface Circular is a fantastic, short story that encompasses more than you’ll expect. It might only be the length of one journey but its puzzles, characters and complex questions will linger with you at least until the ride home.

Reviewed on Nintendo Switch. It can be purchased digitally here.

Subsurface Circular is a lovely, short exploration game on the kind of people you might sit next to on a metro. It's thoughtful, engaging and thought-provoking.