Ubisoft and Nintendo have teamed up once again after the recent Mario + Rabbids: Kingdom Battle. Starlink: Battle for Atlas is the latest, and possibly last toys-to-life game, with a whole collection of toy spaceships and weapons you’ll be using as an in-game armada. Nintendo Switch players have the exclusive boon to be able to use Fox McCloud of the Star Fox series as a pilot.

Toys-to-life is a genre that died a slow death after Skylanders and LEGO Dimensions. Starlink tries to break away from that with the modular design of the toys. Having received the toys from the publisher before the actual game, I had a chance to play with closely examine (read: play with) each of the toys. Each ship fills unique, with a different weight to hold, as well as different stats in the game. On top of that, each can be customised with different weapons, as well as swapping out wings or adding new ones.

Starlink jumps straight into the story, with your hapless team of pilots and scientists arriving in an alien solar system for a reason that was only ever explained in the on-screen text. It's an understandable choice when you’ve got the toys laid out in front of you, but it doesn't quite work. Apart from the overly long opening cut-scene, Starlink clearly wants you to bond with the central characters but you’re never really introduced to them. Considering you have to choose which pilot to play as, its awkward that you know next to nothing about them. On the Switch version, you’ll also have Star Fox and his friends, which makes learning about all the other characters even more unlikely.

After selecting the pilot, and your ship, you’ll have to arm it. All the different weapons feel remarkably different. From the standard assault rifle and beam weapons to the more exotic missile swarms and battering rams, any combination feels fresh. Most weapons also have an elemental effect that can have added effects on some enemies. This can be a weakness or a resistance. It’s an added reason to constantly swap out weapons but it can interfere a bit with the flow of combat as you occasionally have to pause to change your loadout. You’ll need a fair amount of space next to your console to park all your spare parts, and playing on the go with the Nintendo Switch is next to impossible because of this.

The combat, in general, is a lot of fun though, with enemies as varied as the weapons, although they don’t change much from planet to planet. Space combat is all about typical dogfighting, while planetside firefights are blends of chases and strafing. Nothing apart from the modular toys is particularly revolutionary, but it's all solid and engaging gameplay nonetheless.

Starlink feels a lot like a Ubisoft game, with its open world cluttered with objectives and side quests to tick off. Most of the side quests are nothing more than hunting and fetch quests, with rewards that are never really explained. Unfortunately, the worlds aren’t nearly as interesting to explore as other recent Ubisoft titles like Assassin's Creed: Odyssey. Planets are pretty but barren, the occasional body of water or vibrant forest to break up the fields and deserts. More or less all your interaction is done with buildings and animated portraits of its occupants. Starlink doesn’t do a great job of making the system feel lived in, which makes exploration, and the already flimsy story less interesting.

The currency in Starlink is something that, oddly, is never explained. The buildings you encounter on the planets can be upgraded by doing side quests and turning in random items you find. Although I’m not even sure what this actually does. You can upgrade your ship, but that is done with experience points, and it's not like you can buy any more weapons in-game.

Starlink: Battle for Atlas is a good game, with study and detailed toys that kids with any imagination can enjoy even when they aren’t plugged in. Its in-game combat is fun, with a host of combinations to experiment with, and plenty of enemies to kill. The bosses are huge creatures which feel like satisfying challenges, even if it's all a little simple, though that could be expected given the target audience. But while it takes up a lot of space to house all your ships and their equipment, the in-game world itself feels empty and unimaginative, to say the least. The story feels haphazard, with no real beginning and an unsatisfying antagonist. For the fans of the toys-to-life genre, Starlink is not just their only option but also a good one in terms of the toys thanks to some interesting modular design and solid combat. But as a game on its own, behind all the fun toys, there is not much going for it. 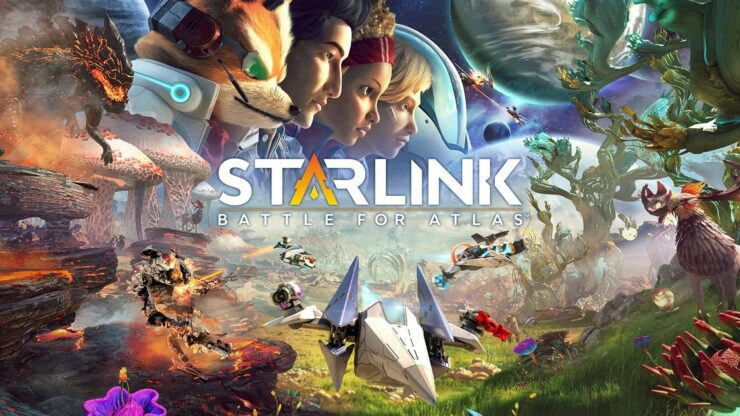 Starlink is a fun game, with great toys to play with and solid combat to back it up. Unfortunately, the sloppy story and barren explorable worlds hold back what could have been a great return to form for the toys-to-life genre.

Starlink: Battle for Atlas Sales Were Below Expectations, Admits Ubisoft