Discarding the typical gun focused mechanics, Spellbreak is a gust of fresh area for the genre, swiftly followed by a fireball, lightning storm, and a big old rock. Although it is immediately obvious how different the game is, Spellbreak does follow the same basic formula for the genre. The core game revolves around dropping players into an increasingly shrinking map and having them duke it out until one player, or one squad remains. Squads are made of a maximum of three players, but the greyed-out duo option suggests a two-player mode is also in the works.

But you aren’t a soldier of fortune or a flossing secret agent in Spellbreak, and I’d be surprised if you see any of the Avengers floating about. But you will see Airbenders leap across the horizon, toxic wizards emerge from clouds of green poison, and lightning witches come crashing down from the sky. Spellbreak is a magical Battle Royale in the most literal and figurative way.

Instead of tense gunfights on the ground, you’ll be engaged in huge magical battles with incredible verticality and bright, colourful animations that rival the excitement and splendour everything from Avatar and Harry Potter. Mobility is really important in Spellbreak, so you won’t see anyone trying to duck around cover. Instead, you’ll barely see anyone stay on the ground for more then a couple of seconds as they jump, fly, or teleport around to try and get the upper hand on their enemy.

At the beginning of each match, you must pick a starting gauntlet that determines your initial elemental power, and the skills you will use for the match. Each has its own unique playstyle, with strengths and weaknesses you’ll quickly learn to exploit and overcome. But you won’t be tied into to just one attack for the fight. Scattered through the map are gauntlets of every other type, and you’ll need to use both to survive. On top of them, there are pieces of equipment to find that offer various buffs and boons you’ll need when you find another wizard. Unfortunately, the game's tutorial isn’t great at explaining its more complex systems, or the importance of some of the items you’ll come across, but you can start to pick it up after a few matches.

At a glance, the battles can seem equally complicated and completely chaotic, but Spellbreak is a surprisingly simple game to play. Each gauntlet only has two attacks, so you’ll only ever be thinking about four ways to exile an opponent at a time. And it just feels so satisfying to play. Each strike is quick and punchy and there’s a real sense of feedback that comes from seeing how the world erupts in magic as you press a single button. Even if you lose a battle, the feeling of landing a good hit, or attempting a bold escape attempt is enough to overcome the loss.

This alone would be enough to make the game look and feel stunning, but Spellbreak has one more incredible trick to help cement this game in your mind, creating intense battles and stories to retell to all your friends.

That’s because half the elements interact with each other on the battlefield. Toxic clouds explode on connecting with fire. Tornadoes turn into lightning storms with a single spark. There are dozens of combinations that you have to learn to use and avoid as you grab your second gauntlet and head into the fray. This addition makes each fight especially unique though, as you try to hit your enemy with a one-two punch, they’ll be trying to turn your own attacks against you, or nullify them completely. What’s great about this system is that despite the combination of attacks, there are essentially only six weapons in the game with clear, distinctively looks. This not only means that it doesn’t take long at all to learn the basics of each, but it also means you can add a huge amount of depth to them for more experienced players.

It’s a shame then that Spellbreak is partially let down by a host of quality of life issues that we hope will be improved in future updates. Spellbreak is a free to play game that only recently released out of beta and it still has the brand new feel, especially in the menu sections. It's such an odd thing to comment on but the font of the menus feels very placeholder, like it's whatever the text box uses as default. Obviously that isn’t much of an issue, but it adds to the feeling that the game could use a little more polish outside of combat. Loading times can feel just south of comfortable, and the daily quest that in theory encourages players to try different gauntlets and tactics don’t seem to offer any reward, and half the time seems to disappear. The biggest issue for me is the unskippable level up screen at the end of each match. After a great match or a terrible one, you’ll want to jump back into the fight as soon as possible, but you’ll have to navigate through screens before you can do so.

Smaller things in the actual matches could be improved too. As you are dropping into a match, it can be difficult to see if anyone is falling without accidentally gliding off course. They are all such minor issues, and it's understandable that the team would much rather focus on the exceptional combat, but they do detract from the enjoyment when they start piling up.

But Spellbreak is a game you’re going to want to try regardless of the awkward menus. The combat is so well balanced, so innovate for the genre, and offers such a variety of depth and fun that it is impossible not to recommend the title to everyone looking for some short matches of thrill-seeking fun. Even if the menus aren’t polished, the combat itself is, and that's by far the most important part of the experience. 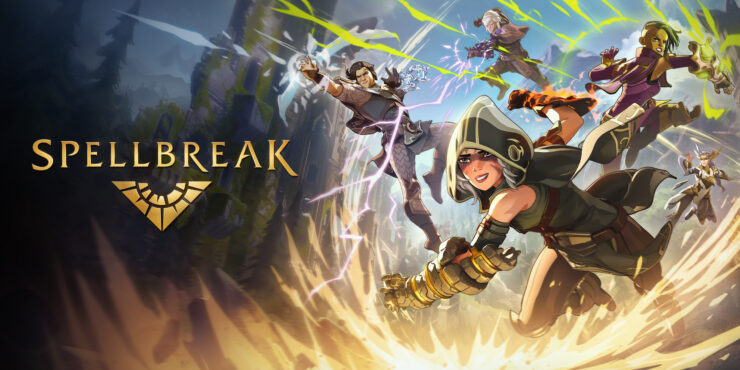