Adding additional buttons to a gaming controller isn't anything new. After all, this was one of Scuf Gaming's core features during the peak of Xbox 360 and competitive shooters. However, first-party manufacturers have largely stayed out of the modification conversation, leaving it up to other companies to come up with unique control solutions (except, of course, for the Xbox Elite Controller or Xbox Adaptive Controller). Now, Sony has come to market with their own first-party solution that offers gamers more control over their games without having to upgrade to a brand new controller with the official Back Button Attachment for DualShock 4.

Sony's newest device is so small, you might miss it when browsing around store shelves (I know I certainly couldn't find one on store shelves until I found it tucked away behind an assortment of brand new DualShock 4 controllers). Inside this small package is the Back Button Attachment, the typical instruction manual, and a handy picture guide on how to attach the accessory to your DualShock 4 controller.

Once in place, the Back Button Attachment doesn't wiggle or feel loose, so it becomes a natural extension of the controller once in place. Every time I removed the attachment and snapped it back into place, I had this fear of pushing too hard at an angle and snapping the EXT plug. However, now that the attachment is set onto the controller, there's no reason to ever have to remove the Back Button Attachment, unless you happen to use a chat headset or controller charger that requires that EXT port.

Setting up the Back Button Attachment is perhaps the simplest controller modification I've ever had to do to date. On the unit is a large 1-bit OLED screen that only turns on when pressed (to conserve battery) to show the current status of the two rear buttons. By holding the button for a second, the unit can be remapped and giving the button a double tap swaps between the three various onboard profiles.

Remapping the Back Button Attachment is a fairly straight forward affair. After you've held the button down to enter the programming mode, the screen illuminates and shows you what buttons are currently assigned to that given profile. Tapping either of the back buttons lets you cycle through the various controller buttons. Nearly every button on the DualShock 4 controller can be programmed, with the exception of the Share and Touchpad buttons (L3/R3 can be selected but not the directions on the sticks). I would've liked to have the Share button be available for easier screenshots, but that's just a personal preference. If you ever want to reset the whole device, holding down back buttons and the touchscreen button for five seconds wipes all three profiles back to default.

All three profiles of button assignments are saved directly to the Back Button Attachment's onboard memory, rather than having profiles saved on a game-by-game basis. If you play a lot of shooters, having one profile that makes crouch and reload to the back buttons makes sense without having to map the same commands for each game you play. Players that jump into a wide variety of genres might want to make the back buttons their gear shifters in a racing game or bring up the build menu in Fortnite, but with only three profiles, you're going to have to choose which games get saved and which ones you'll have to reprogram on a regular basis. Not being able to program multiple inputs to a single Back Button (such as L1 and a direction to drop a sign in Death Stranding) is a feature that I would have liked to see in the Back Button Attachment, but that wasn't a feature that Sony was pushing for with this device. Because there are no drivers or software powering this accessory, if you want to use this device on PC, there are zero issues with compatibility and anything that works with the PS4 controller will work with the Back Button Attachment.

The two Back Buttons contour with the hand grips of the DualShock 4 and, depending on how you hold your controller, will rest your middle or ring fingers naturally against the wings. A gentle squeeze is all that's needed to activate the Back Button with just the right amount of resistance that you won't accidentally press a button when you pick the controller back up or tense up under pressure. Only the contours of the Back Buttons will trigger and activate a press; pressing the flatter parts of the attachment trigger no response. As much as I like the Scuf Vantage 2's rear paddles, the clickiness of the third party paddles just doesn't compare to the softer pull on Sony's solution.

Compared to the other offerings on the market, Sony's official back button solution only offers two additional buttons while others offer at least four. However, those rear paddles on the competition usually try to cram too much into a smaller space. Reaching over one paddle just to press the one beside it has left to finger cramps when I played with the Vantage 2 for extended periods of time. I think Sony hit the perfect balance of only having two buttons and designing an accessory that fits nicely into the contours of the controller.

I recently have been picking up the Steins;Gate spinoff My Darling's Embrace and playing it at my own leisure. With the Back Button Attachment, I mapped the X button to the right paddle and read through the game one-handed, giving the controller a gentle squeeze to advance text while keeping my other hand free to enjoy snacks.

Battery consumption with the Back Button Attachment so far seems negligible compared to using the controller without it. Since the OLED screen times out after a few seconds of inactivity, that doesn't have much impact on the battery drain. However, I can't speak to this definitively as my 20th Anniversary DualShock 4 has seen so much use that it can barely hold more than three hours of charge when at maximum capacity. If you play with your controller wired in via USB all the time, this won't even be an issue.

Sony's Back Button Attachment for DualShock feels like a natural extension of the controller and once added to my controller, feel like they should have been there all along. Third-party controller makers like Scuf have realized there's a need to do something with your ring fingers besides just holding the controller and I'm glad to see companies like Sony offer a solution that doesn't require purchasing a $180 controller to achieve. For only $30, the Sony Back Button Attachment is a comfortable introduction to what premium gaming controllers can offer as a competitive edge.

Unit purchased by the reviewer. 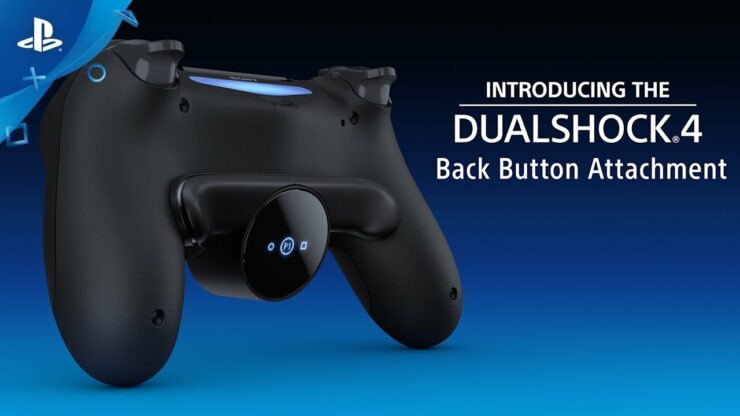 The DualShock 4 Back Button Attachment is a natural addition to Sony's controller, adding in accessibility and a second set of programmable buttons without having to spend $100+ on a pro gaming controller that offers similar features