Around this time last year, SCUF Gaming made its first modular controller with the original SCUF Vantage. This new design kept the asymmetrical sticks that have been staples of the Xbox lineage and added in a number of other features that pro players use in their toolset: rear paddles, adjustable and swappable trigger lengths and the ability to be used as a wired controller when input latency can throw a match. I reviewed the SCUF Vantage last year and found it to be feature-rich with a build quality that couldn't match. With a new version of Call of Duty shooting up the sales charts, the new SCUF Vantage 2 has been released just in time to spend a few more quality hours with Captain Price.

SCUF's customizable PlayStation 4 controller comes in two flavors just as it did last year: a purely wired version and a hybrid wired/wireless version, the latter of which I was given a sample to review. If you aren't looking for the versatility to use your controller wirelessly, the wired variant of the SCUF Vantage line works just as well as its premium Bluetooth counterpart. Both years' versions of the SCUF Vantage operate as Bluetooth controllers that you originally had to use a second controller to delve into the PS4 device menu and set up manually. 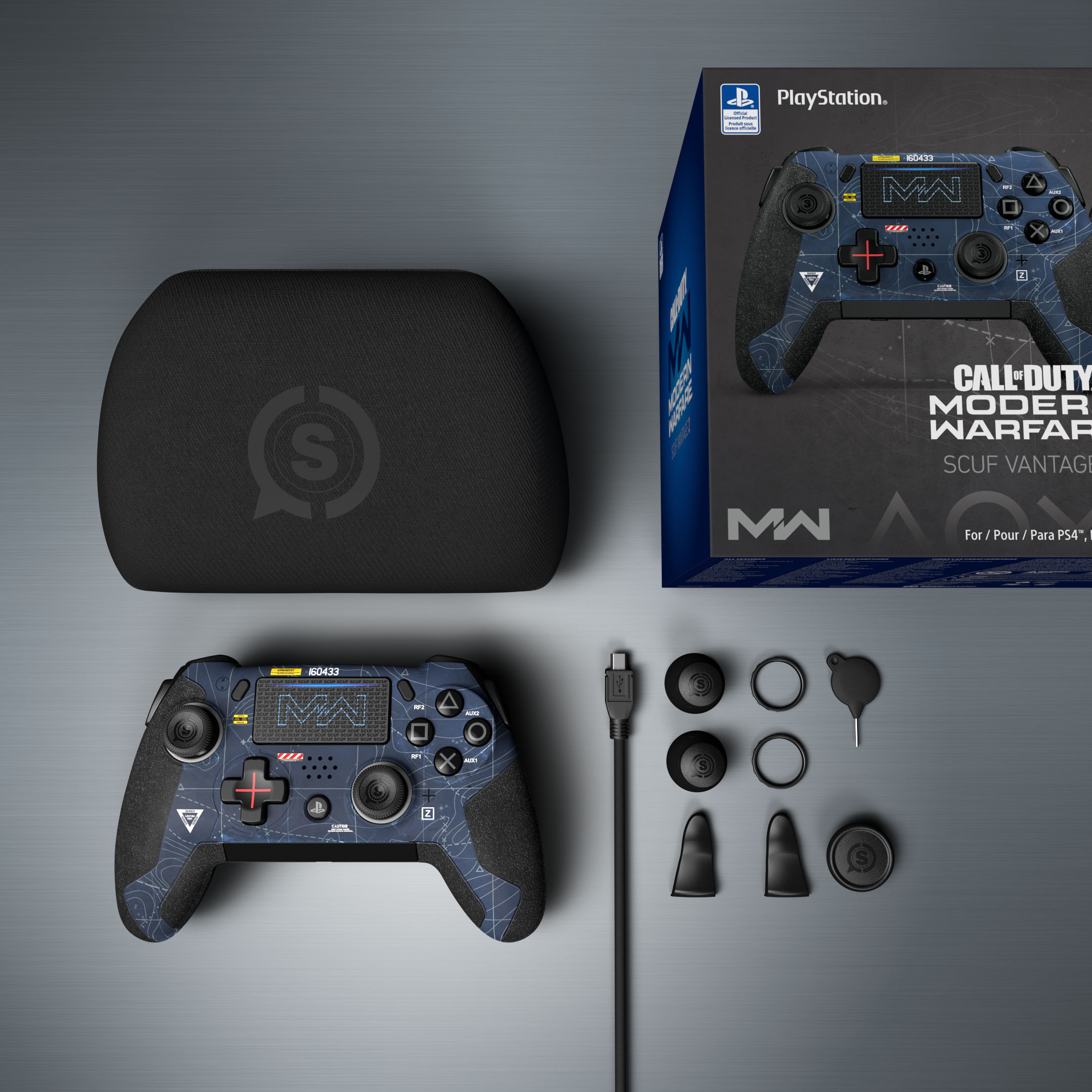 SCUF's customization software is a pretty barebones app that lets you create custom loadouts for any game in your arsenal and load them onto your Vantage 2 controller, one at a time. From here, players have the option to modify how wide the deadzones are on each analog stick, vibration intensity, the sensitivity on either trigger before they engage, and what controls the six extra buttons are mapped to. The app itself is simple and straightforward, although I'm not too sure why it needs to consume 40% of my CPU's processing power to run. 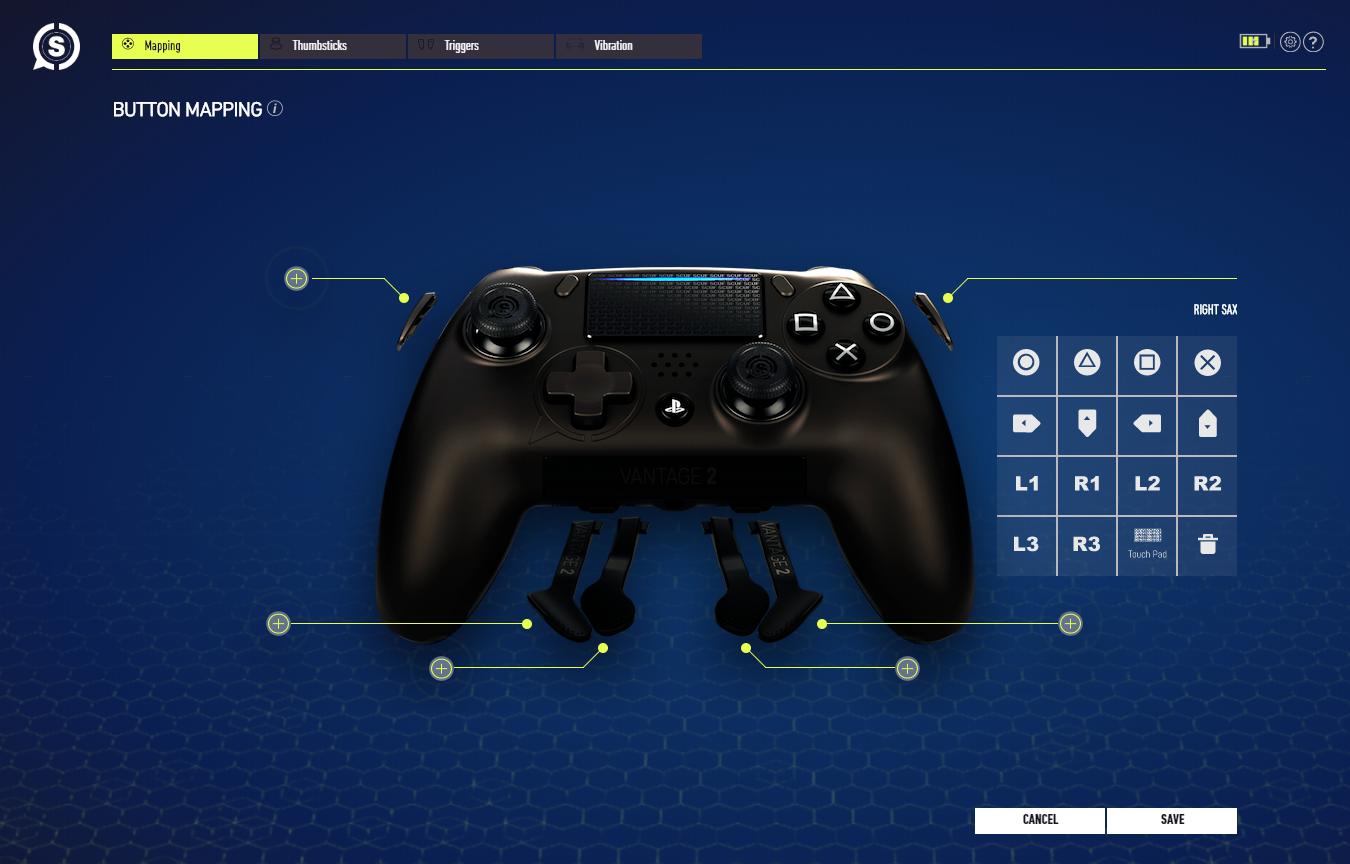 Among the weaknesses I had to note in my review of the original SCUF Vantage PlayStation 4 controller, the overall build and feel of the controller stood out. The triggers and buttons each had a hollow and brittle feel to the plastic components to the point that I feared breaking the controller if I applied even a little too much pressure. SCUF certainly has seemed to take note of the issues that fans and critics alike had with their first-generation controller, as nearly every item that I gave SCUF a negative review for has been addressed this time around in the wireless SCUF Vantage 2. Even the build weight feels more evenly distributed that there's a nice weight

The audio bar that adorned the first-generation model is largely the same in this year’s SCUF Vantage 2, with the same sensitivity and trackpad design to swipe across for volume intensity or a brief hold to disable the microphone. It’s still a small annoyance when you accidentally brush up against the volume bar in the midst of a match, so I do wish there was a way to lock it in place when you don’t need to adjust the volume. Functionality also remains the same: swipe to raise/lower the volume, hold to mute your mic. Two colored LED's on the side indicate whether audio is transmitting into the headset while the other shows if your microphone is muted. When you don't want the other team to hear your death chatter in Call of Duty, the toggle certainly comes in handy.

This year’s SCUF Vantage line retains the same back grip adorned with hundreds of tiny hexagons. These build off one another to create a textured design that instantly fits against the contours of your hands, no matter how you hold your controller. With the minute gaps between each hex, any amount of adrenaline sweat is whisked away, so toss out that bottle of Gamer Grip you've been saving for clan matches. This texture on the SCUF Vantage 2, just as it did with last year's controller, leaves your fingers free to tap at the rear paddles without the worry of any accidental slippage.

Last year’s SCUF Vantage controller introduced two unique buttons that I’ve never seen implemented on a pro controller: the infamous SAX buttons. This pair of buttons rest on the outer sides of the controller, just below the L1/R1 triggers and typically right in the crook of one's knuckles (depending on how the user holds the controller). With last year’s Vantage, I wound up removing these for much of the review (all of the adjustable buttons and triggers on the top, rear and sides can be removed) as I routinely activated a reload when I didn’t mean to with the one on the right side. It’s hard to say whether it’s a combination of becoming more accustomed to the design or having the SAX buttons be made of firmer and denser plastic material, but I didn’t hit these at the inopportune moment nearly as much as previously before when playing with the SCUF Vantage 2.

The same goes for the four rear paddles on the SCUF Vantage 2. Between this year's SCUF Vantage 2 and last year's model, the basic features of the four rear paddles are the same: similar length, width, and texture. What's different with the SCUF Vantage 2 is in the feel and tension of the pull on each rear paddle. Even after breaking in last year's model on Call of Duty Black Ops 4, I found the two outer most paddles to be stiff to press in. With the revised design, there's a much tighten depth to press in for the paddle to engage while the actual pull has a more gradual curve of tension. These paddles no longer simply click into place like last year's model, giving players a few milliseconds of faster reaction timing on the press.

SCUF has released three models of the SCUF Vantage 2 and it really comes down to whether you want to go with a purely wired model or if the extra $30 to have a proper Bluetooth controller is worth the upgrade. Beyond that, SCUF also offers a Modern Warfare-themed Vantage 2 that still has all of the same features but with specially marked faceplates and paddles. Though you'll never see it during normal play, the removable vibration modules are themed like the dials on a sniper scope. The Modern Warfare themed controller also includes a keychain charm for use on any of your weapons in Modern Warfare. It's a cool addition but I doubt I'll ever replace my bottle of beer charm for the scope.

Swapping between the two SCUF Vantage controllers for my review, the more that I play around with the SCUF Vantage 2, the more impressed I am with the changes. While the two controllers may look the same on the outside, what's under the hood is game-changing. I'm still getting used to the six extra buttons on the wireless SCUF Vantage 2, but my KDR has never been higher in Call of Duty: Modern Warfare.

Nearly every issue I ran into from last year's SCUF Vantage has been addressed and improved upon. Where gamers may have found the first Vantage lacking, the new SCUF Vantage 2 might be your new secret weapon to taking on the Call of Duty World League.