Are you fond of jokes about male genitalia? Do you think the name “Wang” opens up a myriad of potential gags? If you are like me and think the odd dangly bit between men’s legs is somehow hilarious, then the dialogue in Shadow Warrior 2 will please you. If not, then the good news is that cutscenes can be skipped, and the gameplay is balls-to-the-wall, all out action. And it’s glorious.

Shadow Warrior 2 is a fun and frantic FPS where you fill the shoes of Wang, series protagonist, demon fraternizing bad boy and penis joke aficionado. Wang uses Chi-Bending powers to access mystical abilities, chief among them an otherworldly dash which can be used mid-air to soar over enemy heads – combine this with an ample arsenal (yes there are several jokes using the word ‘arsenal’ of course) of absurd weaponry, and you have a recipe for success.

The premise of Shadow Warrior 2 sees Wang get the soul of a girl called Kimiko stuck in his head while her body is being “repaired,” and of course, it all goes horribly wrong in the interim. Wang quickly finds himself stuck with a headache which has a voice of its own, tangled up with otherworldly demonic forces and the slightly more mundane Yakuza.

The first thing to note about Shadow Warrior 2 is that it is fast. The Dash is an invaluable tool that there’s no penalty for readily abusing, so the best practice is to use it almost constantly. Dash in, shotgun blasts, dash out, strafe dash to reload, dash back in, rinse and repeat. Combine this with the beautiful variety of weaponry and a few of Wang’s other Chi-Bending techniques, such as a ‘Force Push’ style move and the wonderful crimson-tinted Fury Mode, where tunnel vision takes on a new meaning as only enemies glow against the blood-red environments.

One thing that’s immediately obvious about Shadow Warrior 2, in case you couldn’t tell by how I opened this review, is that it’s goofy, dumb fun. Dialogue is filled with gags, Wang can’t resist a single opportunity to take the piss out of someone, and that is even reflected in the game’s mechanics. Weapons and enemies, for example, can be attuned to certain elements through equipping gems. Shotguns can have fiery blasts, chainsaws can be ice cold, and so on. What’s particularly lovely is when you encounter an enemy which is, say, Fire type. They’ll be on fire. This almost makes sense when facing off against demons from another realm, but when it’s a random Yakuza swordsman, just walking about while constantly on fire, it’s just laughable, in the best way possible. Of course, this isn't a game you'll play because of the story, which is quite forgettable.

Comparisons are going to be drawn between this and DOOM, 2016’s other fast-paced shooter and despite DOOM’s years of development and massive production values, Shadow Warrior 2 might just outshine the competition. One could argue that DOOM’s melee takedowns add an element of strategy to the fast-paced and sometimes mindless combat, but other than that, Shadow Warrior 2’s dash allows for so much more speed, turning each battle into an incredible ballet of swinging swords and whizzing bullets.

Other new additions to SW2 include side-missions, and somewhat procedurally generated maps. That sounds bad, but in practice you’d never know that levels weren’t handcrafted. Most levels have a large, static world, and then smaller elements such as how the areas connect or building interiors are randomized, offering small amounts of replayability. In practice, areas do become familiar as side missions and story missions alike are often found in the same maps, but different areas. This works brilliantly, mainly because each area is more than large enough to house a variety of mission objectives.

Another randomized element is enemies and their locations – as I said, the maps are absolutely huge, and if you wander away from the beaten path you’re likely to find a gaggle of opponents waiting to cut (or shoot) you down. This can vary from a selection of standard mobs, mowed down as quickly as they spawn, or even boss encounters, with an early level summoning a Bunny Lord boss to punish me for my killing of harmless rabbits. Small details like that are endlessly charming.

And all of this without even mentioning the multiplayer. There are no traditional deathmatches, instead there’s co-op, with players being able to set up your main game objectives so online pals can hop in and out. I left my matchmaking open constantly, and even though I was often alone in my journey, I occasionally had a helping hand appear to assist with bosses or just combing the streets for more baddies to kill. It’s a nice touch, which will add loads of replayability as players upgrade their weapons, enhance their Skills or even just up the difficulty level to face greater challenges.

It would be a struggle to not recommend Shadow Warrior 2, it’s just too glorious. Running, gunning and cutting down enemies is invigorating, and the action never lets up for even a second. The sense of humor isn’t going to be everyone’s cup of tea, but cutscenes and dialogue are always skippable – just in case you really want to get back into the action.

Shadow Warrior 2 is also a great PC game from a technical standpoint. It's the first PC game to support both HDR and NVIDIA's Multi-Res Shading tech, and most importantly it runs great on any hardware thanks to the great work by developer Flying Wild Hog.

You may check out our in-depth analysis of Multi-Res Shading and the related performance gains, in case you missed it.

PC (Steam) version tested (code provided by the publisher). PlayStation 4 & Xbox One ports due in 2017. 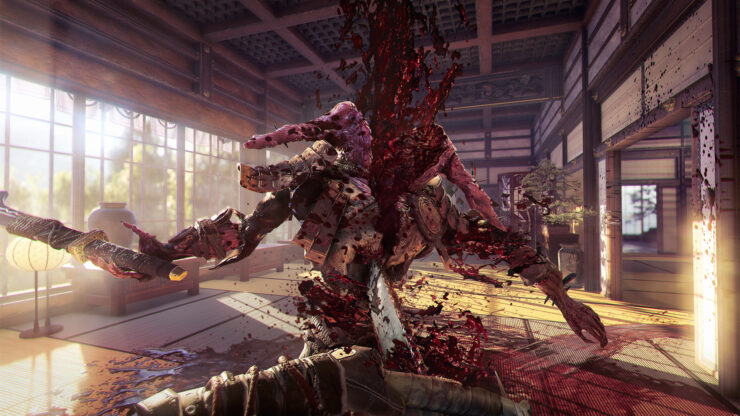 FPS fans, Shadow Warrior 2 is just brilliant, dumb, fun. You won’t regret investing your time and money in this raunchy and a bit outrageous shooter, believe me.