One of my first experiences with Akitoshi Kawazu's unique RPG design was that of SaGa Frontier on the original PlayStation. Despite offering seven unique viewpoints, I only played through as the masked superhero Red/Alkaiser and even then never succeeded with making my way all to the end. I've since given the title multiple attempts and even completed a couple of scenarios over time. You could imagine my surprise when Square-Enix suddenly announced that not only was a remaster of the original title in the works, but they would also be adding in content that once was left behind on the cutting room floor, including an entire scenario. It's safe to say that a project like this couldn't have happened without the support of SaGa fans around the world that have supported the series with the recent releases of Romancing SaGa on PlayStation 4 and Vita as well as the mobile gacha title Romancing SaGa Re;univerSe, a title I've sunk a few dozen hours of since its global release last year. In only a couple of days, longtime fans will have their chance to experience SaGa Frontier Remastered for themselves. 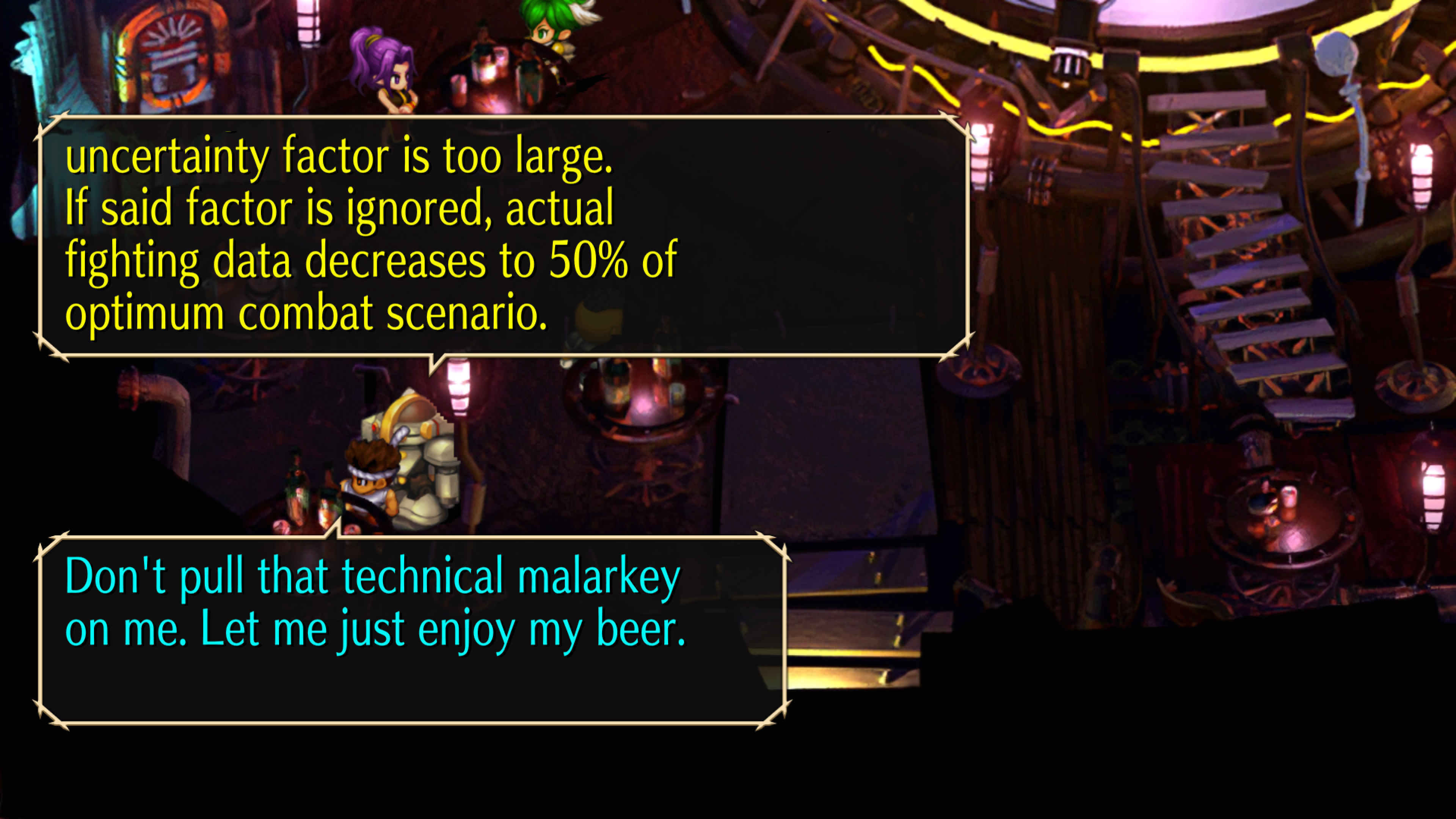 SaGa Frontier Remastered does away with a linear style of storytelling and instead gives players the choice to choose any one of seven distinctly different characters that run the whole gamut of humans, mystics, monsters, and mechs. Each character has their own motivations and reason to venture out into the world. While you'll need to play as them all to get a complete story, each feels satisfying enough to play through on their own to completion (minus Lute, his story is still pretty awful). The two most recommended characters to start are Red and Emilia, humans with a good amount of combat potential to survive the challenge without too much issue. Some of the more fragile spellcasters like Blue and, to a lesser extent, Asellus require a bit more finesse and planning to figure out the ideal growth without hitting a battle rank barrier.

I won't go into great detail for SaGa's battle rank mechanics, if only because I still don't entirely wrap my head around them, in all honesty. The basic premise is that as the player engages in frequent battles, the system will build up an invisible battle rank that's supposed to 'accurately' portray the player's combat potential. The reason for this is that rather than gaining traditional levels as you would in another RPG, characters instead raise their raw stats after each battle and typically aligned with their combat actions (strength for melee attacks, quickness for guns, willpower for magic, and so forth). When fighting an equally (or more) difficult enemy, you'll have a solid chance of raising these stats after combat. It's when you're grinding away on weaker enemies that run counterintuitive to the mechanics; not only will you rarely raise a stat, but those battle counts will tick upwards to increase that battle rank. As enemies get more powerful, the player might not catch up to match, leading to a stalemate in later chapters. 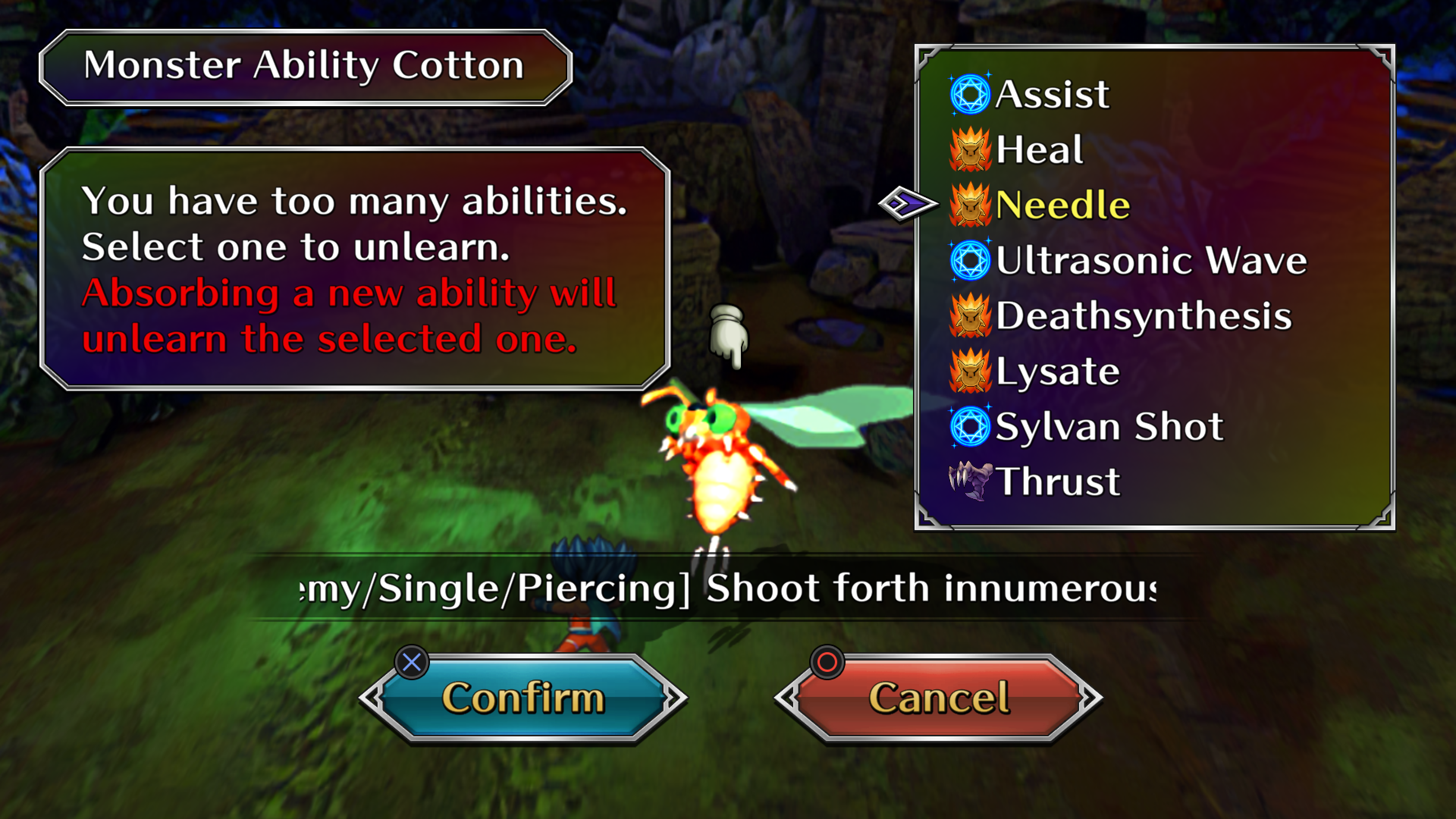 The other main form of character growth lies in the brilliance of technique. By utilizing basic attacks, there's a chance to engage in a so-called 'light bulb' moment and learn something brand new. Just as with stat increases, there's a higher chance of learning these new techs (as long as you don't forget to clear some spots in the eight-slot roster). Most of the weapon skills are decently powered compared to a basic attack, but it isn't until you unlock the 8-10 SP costing abilities that they really shine. Or, if you want to sincerely break the combat system, invest in those punches and kicks until you unlock a whole bevvy of throwing techs. Slide, Suplex, Tumble, Collapse, and Giant Swing all combine into DSC, an insanely useful tech that can hit anywhere from 5,000 to 25,000 damage depending on luck. The sole downside to DSC, minus the high cost to cast, is the lack of ability to combo with other abilities. The other handy way to deal damage outside of DSC is by linking tech and spells together in freeform combos. Nothing is quite as satisfying as getting all five teammates to weave suplexes, gunfire, and magicks all together in a flashy combo (you'll need to master these combos for a very specific combat challenge later on as well as a couple of PlayStation trophies, just for precaution). 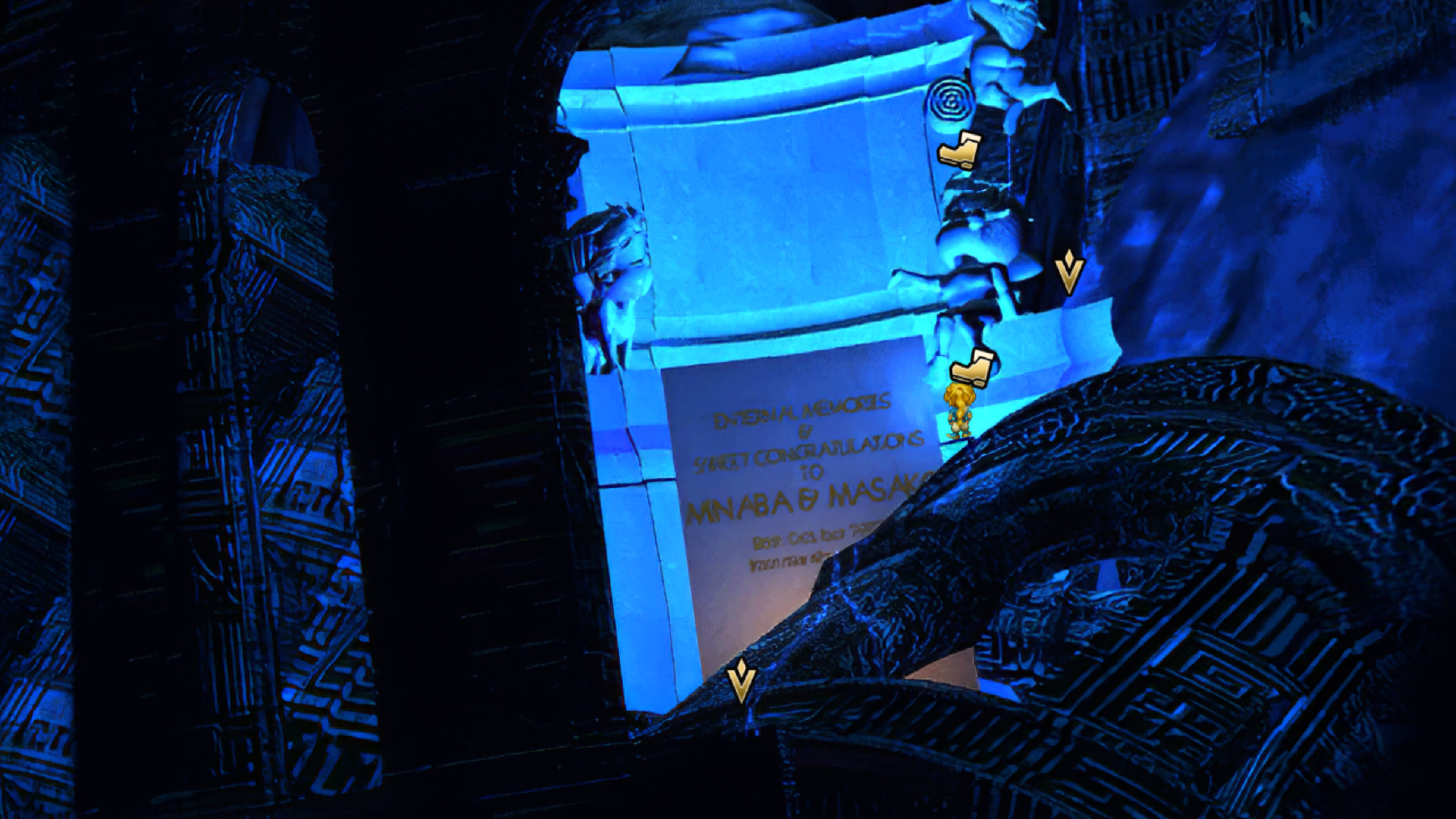 Six of the seven playable heroes and heroines of SaGa Frontier largely offer a similar experience to what players have enjoyed over the past two decades. This includes the same highs and lows of the scenarios, quirks, and confusing paths alike. For Asellus, a character who deserved to be more fleshed out in her unique half-human, half-mystic lineage, there were some story moments that couldn't make it into the final release. Those story scenes, complete with reliable narration from a non-player character, help fill the gaps of what wasn't told the first time Kawazu helmed the SaGa Frontier project. There are minor divergences to Asellus' story even early on that only the most astute of SaGa fans would recognize. I played through her story twice and was pleasantly surprised to find that a certain interaction with Kurenai was restored, giving an alternative method to leave Fascinaturu and head to Mosperiburg. 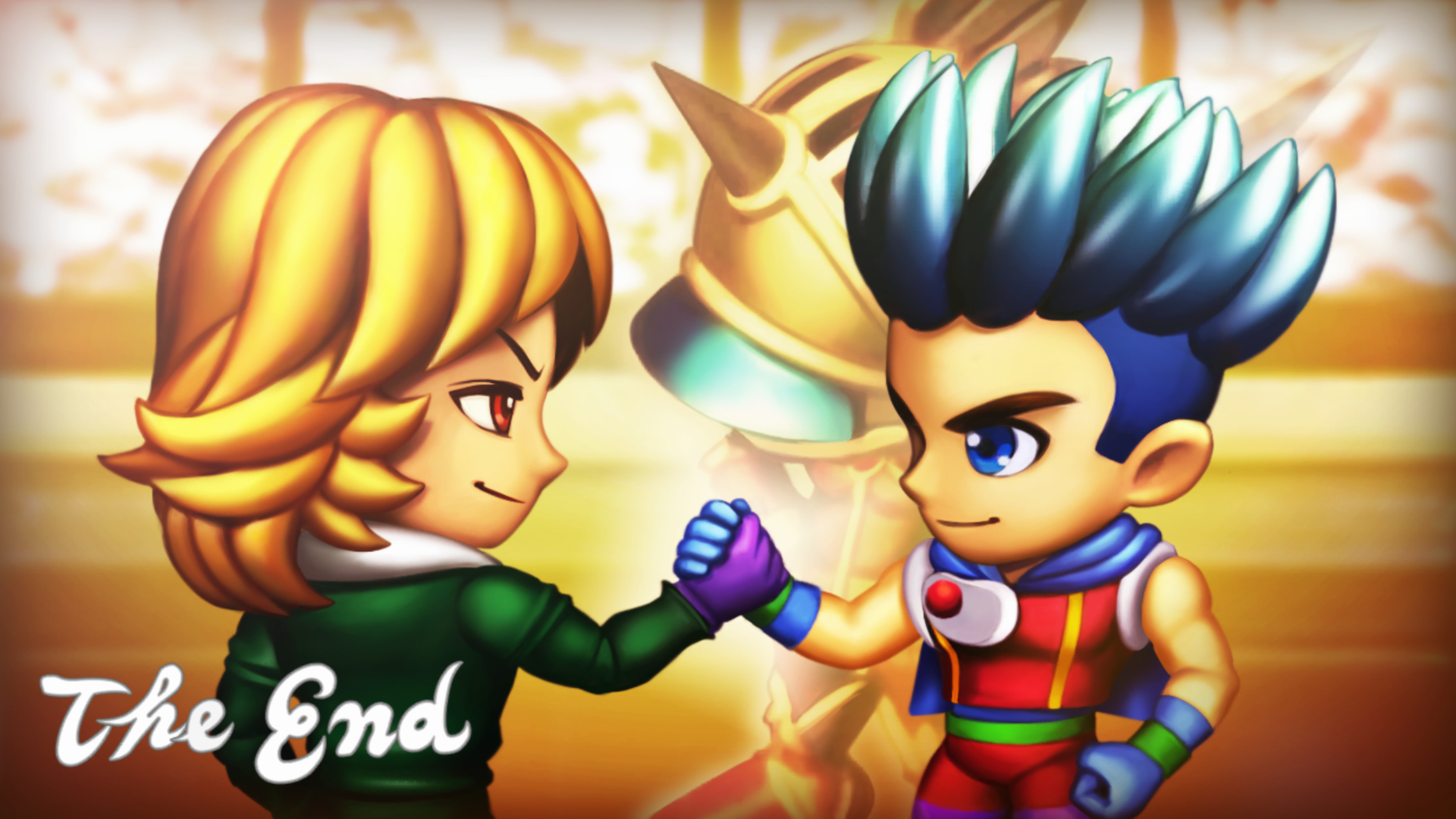 The addition of an eighth playable character shouldn't come as a complete surprise to fans that have scoured through decades of forum posts and developer interviews with the original SaGa Frontier team. With an RPG as ambitious as SaGa Frontier, many story moments didn't survive the final cut. Among them was being able to play as Fuse, an IRPO agent that subtly finds his way into every scenario, provided the player is seeking out the Shield Card for a specific magic sidequest. This time around, Fuse is given top billing and given his own scenario in SaGa Frontier Remastered.

I should correct myself; it isn't just one playable scenario for Fuse in SaGa Frontier Remastered. He's given a standalone chapter for each of the other seven heroes. Each of his scenarios revolves around how he came to hear about the various instances that the other protagonists face and ekes his way into those critical moments as easily as he can file a police report. If you loved the challenge of facing the final boss in a given character's scenario, you will be given the chance to do so again but with the help of Crazy Fuse himself. Each time you play as Fuse, you'll see those brief moments that the IRPO crosses paths with each protagonist in bite-sized chapters that each lead up to defeating the boss of each scenario. By doing a little bit of extra legwork, you can raise the power of these bosses (which near as I could tell merely raises their battle rank much as one would regularly do in the campaign) with the final challenge leading into fighting off against the ultimate versions of each boss in one long series of battles.

Some of the other additions to SaGa Frontier Remastered are prevalent throughout everyones' campaign. The remastered graphics certainly help give a two-decade-old title new life on PlayStation 4 and show off Tomomi Kobayashi's designs better than before. The world environments still capture that thick and chunky early 3D renders of the PS1 era, and aside from a fair bit of antialiasing, otherwise don't look as though they've aged a day. To get around the prerendered levels a bit easier, handy exit icons are littered throughout the screens, making it so much easier to figure your way out of the two tombs of Shrike.

Another major feature of SaGa Frontier Remastered is in a scenario map that keeps track of the story moments you've already seen and gives a bit of guidance on where to proceed next, something that a SaGa newcomer will certainly use more than once throughout the fifty-hour journey. Lastly, if you don't really feel too eager to fight (and raise your battle rank any more than necessary), you can flee away from nearly every non-essential fight in the game. Unfortunately, you can't flee your way through some areas like the Grail Card quest in Yorkland and a drunken bender through the Kraken-riddled swamp. Trust me, that'll make more sense when you get there.

If the thought of having to wrap up one campaign and start all over on the next character doesn't sound too appealing, SaGa Frontier Remastered finally offers a very reasonable New Game Plus mode. By selecting New Game Plus, you can carry on over as little or as much as you want, from gear, learned techs, cash, stats, and even the battle rank. If you just want to coast your way through the latter scenarios, nothing stops you from carrying over everything but the battle rank and just Suplex/DSC your way through every encounter in your way.

As iconic as the original PlayStation release of SaGa Frontier was, I found the Remastered version surpasses it in every way imaginable. From modern conveniences to digging up lost content once again, there's something for players of all exposures to the SaGa series. If non-traditional JRPG's are as much of a guilty pleasure for you as they are mine, you'll find plenty to love in SaGa Frontier Remastered.

SaGa Frontier Remastered shows the two-decades old JRPG such great reverence by restoring lost content along with modern conveniences. With a high learning curve and an explorer's mindset necessary to truly enjoy, SaGa Frontier does require more experimentation and desire for less-traditional storytelling to get the most out of it.