Road Rash was the ultimate rental game. The Sega Genesis original and its sequels had an attention-grabbing gimmick – a motorcycle racer that let you pummel opponents with metal pipes – and just enough depth to keep you entertained for a weekend. Pretty much every 90s kid played Road Rash, but how many really loved it? Not a lot. Once video game rentals stopped being a thing, Road Rash drove off into the sunset and nobody was that broken up about it.

Well, almost nobody. Back in 2013, Road Redemption, billed as a spiritual successor to the Road Rash franchise, hit Kickstarter and narrowly made its $160,000 funding goal. After a lengthy spell in Early Access, the game got a full release on Steam in 2017 and now it’s come to consoles, which is where a Road Rash successor really belongs. So, does Road Redemption successfully update the Rash formula? Is it even worth updating in 2018? Time to take this one for a test drive… 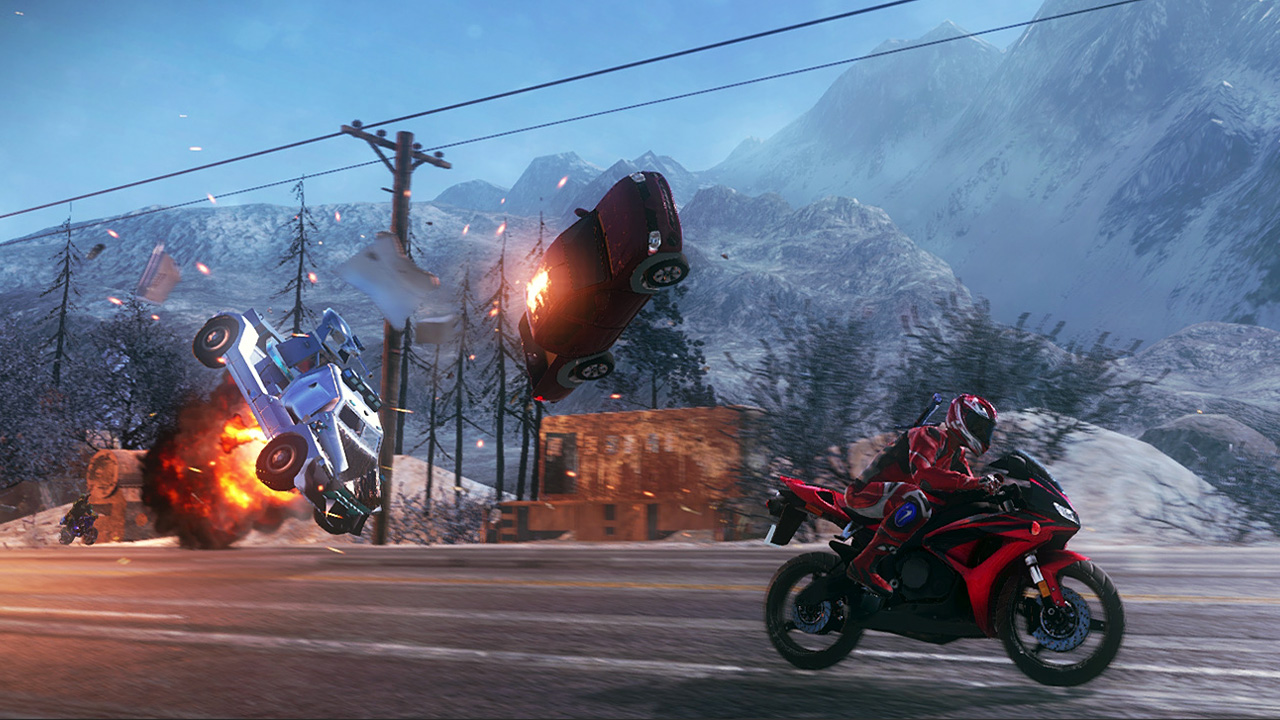 As we’ve already established, Road Redemption is basically Road Rash – you race bikes while meting out bloody violence with bats, chains, machetes, guns, and other weapons. The only real tweak to the premise is a post-apocalyptic setting, which makes all the wanton murder make a little more sense.

Fight controls are simple. On the PS4 controller, the square button makes you attack to the left, the triangle makes you attack to the right, circle does a kick, and X deflects incoming attacks. There is a touch of depth to the combat – bladed weapons can decapitate enemies quickly and efficiently, but helmeted baddies will need to be softened up with a blunt object first. Land enough blows, and you’ll build up a critical strike, which can quickly wipe almost anybody out. The combat works well enough, but all the face buttons being dedicated to fighting results in some control compromises. Hard turns are mapped to the L trigger and activating nitro requires a double tap of the acceleration button, which is just clunky. 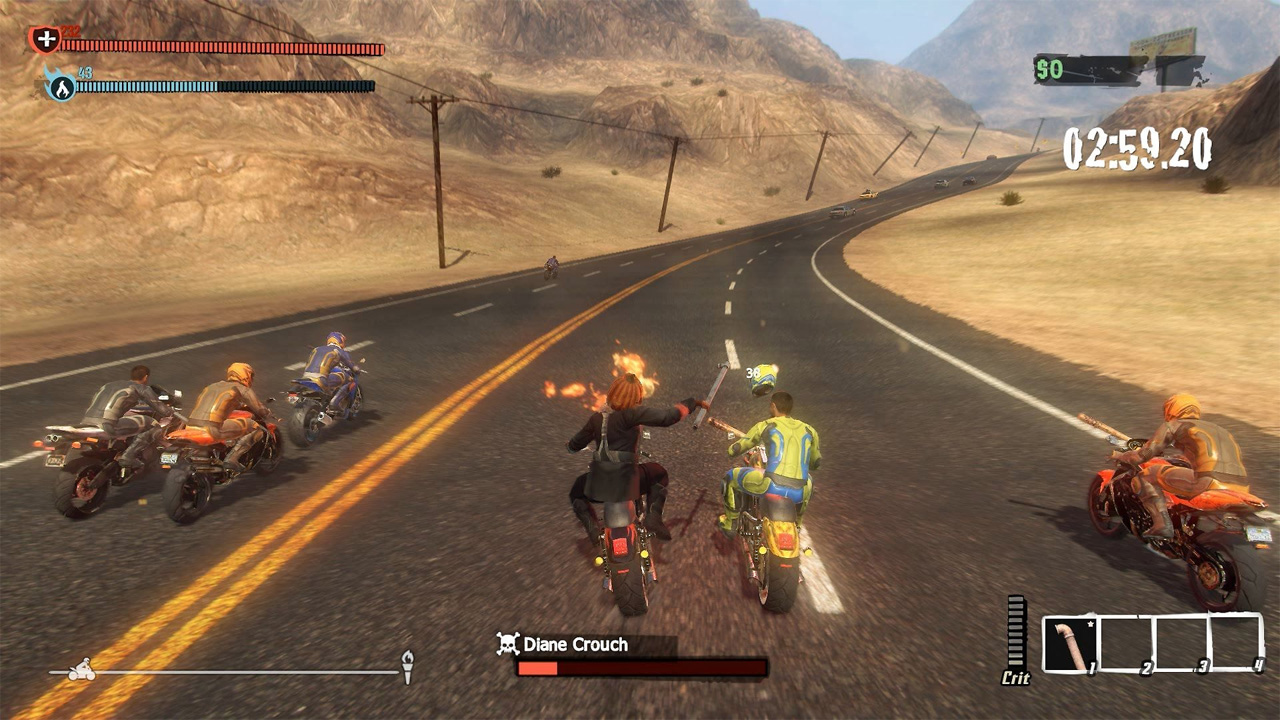 The makers of Road Redemption do make one smart tweak to the Road Rash formula – taking out opponents now earns you nitro. Enemies are swarming bastards, and often the only way to escape the scrum alive is to boost your butt out of there, so there’s no avoiding fighting. There’s some strategy to properly rationing your boost – obviously, you’re going to want to burn some on straightaways, but using it all will leave you vulnerable to a gang clobbering.

Road Redemption serves up a decent number of tracks, but they lack variety, with the game recycling the same three desert, snowy mountain, and post-apocalyptic city themes multiple times. Some courses are straight-up clones with only minor twists added to differentiate them. Tracks aren’t just repetitive, they’re often aggravating, serving up a combination of surprise hairpin turns, changes in elevation that obscure oncoming hazards, and overpowered “shortcuts” you pretty much have to take to win the race. Adding to the headache is randomized traffic, which always seems to slam into you just as you’re getting a good flow going. Road Redemption does try something new with a handful of stages that have you bounding over a series of perilous rooftops, but they’re frustrating in their own special way. This game’s track design had me looking for the offramp. 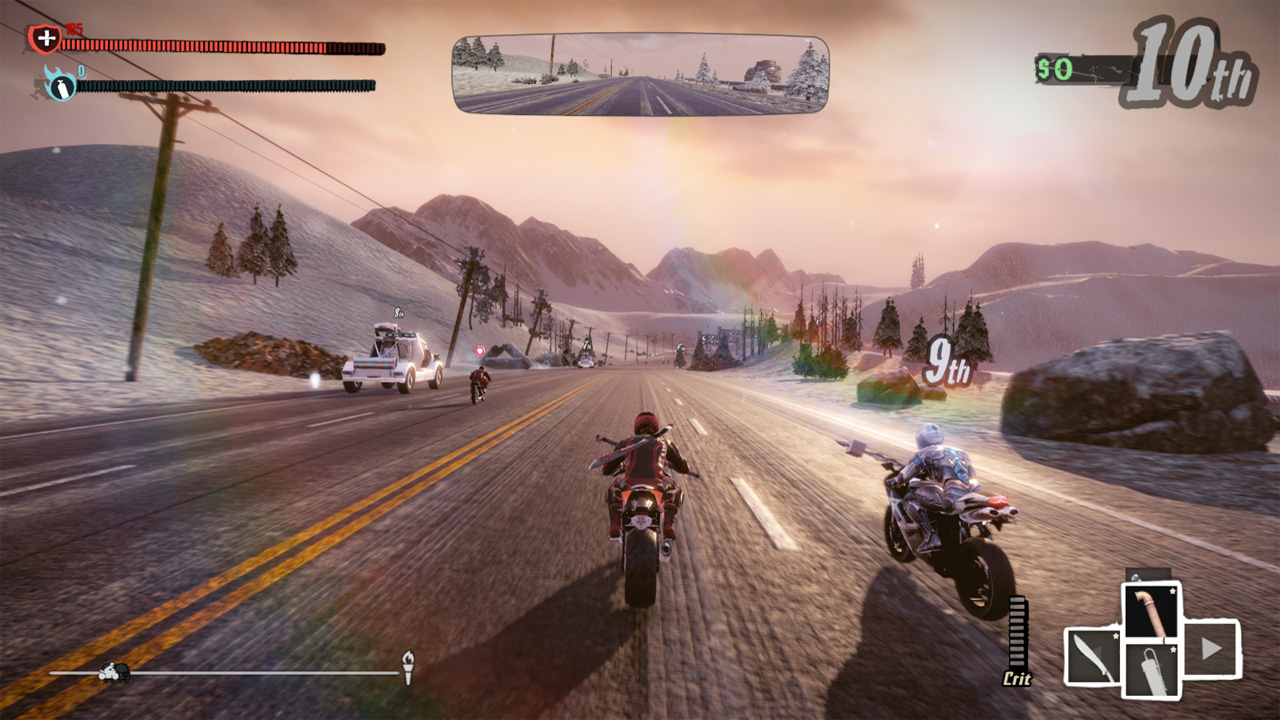 Now, I’ll admit, Road Redemption does a pretty remarkable job of replicating its old-school inspiration. This game feels like Road Rash…warts and all. The issues I describe above were at least somewhat forgivable 25 years ago on 16-bit hardware, but they don’t go down as easy in 2018. Honestly, having to juggle racing and fighting has always been a concept that worked better in theory than in practice. Maybe if Road Redemption had harnessed modern tech to really push its speed, gore, and other visceral elements to the limit, sticking to such a dated blueprint would have been justified. Unfortunately, the game doesn’t look that great, move that fast, or provide any truly satisfying carnage. Framerate hitches, crashes, and other technical issues further damper the fun.

Road Redemption’s most modern element is probably its Campaign mode, which is structured like a roguelike. Your life bar carries over from one semi-randomized challenge to the next, and if you’re killed, it’s Game Over. Mercifully, successfully completing challenges earns you money, which can be used to buy temporary boosts, and XP that unlocks upgrades that are retained after you die. It’s an interesting setup that doesn’t really work within the context of a racing game. One of the joys of the genre is settling in and really learning the ins-and-outs of individual tracks, which is difficult to do when you’re constantly being shunted back to the beginning of the campaign by some random nonsense. Thankfully, Road Redemption also has an arcade-like “Classic Quick Play” option, which lets you progress in a more straightforward way by earning trophies. Personally, I suggest you stick to Quick Play over Campaign, unless you have some extra time you absolutely need to kill. 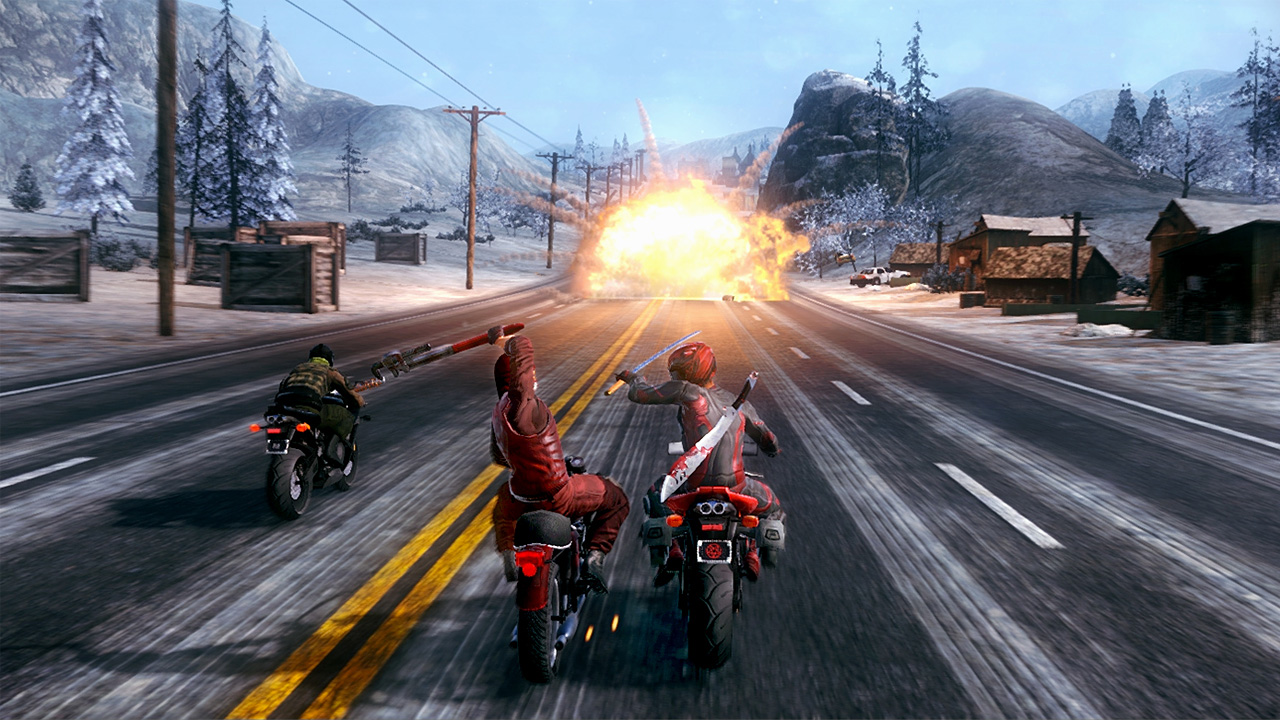 Really, the whole roguelike approach feels like a slightly cheap way to extend the life of the campaign, and even then, you’ll probably finish the game in around five or six hours. Those who focus on Quick Play will be able to experience all the game’s tracks even faster. An extra-challenging Campaign+ and a few difficult-to-obtain unlockables may keep some dedicated fans busy longer, but the average player’s enthusiasm tank is likely to run low quickly after seeing all the game’s content.

This review was based on a PS4 copy of Road Redemption provided by publisher Tripwire Interactive.

Road Redemption delivers exactly what it promises – an accurate recreation of decades-old racing games that maybe weren’t all that hot to begin with. If you legitimately love and have continued to play Road Rash all these years, by all means, give Road Redemption a shot. You’ll probably enjoy it. If the 16-bit era was before your time, or you haven’t touched Road Rash since you returned it to Blockbuster Video in 1993, be prepared for a bumpy ride.