Sharks fascinate people like few creatures on Earth, and yet, they haven’t inspired many (if any) great video games. Certainly none in which you actually play as the toothy eating machines. 2006’s Jaws Unleashed was passably entertaining, but beyond that, your options are slim. Thankfully, Tripwire Interactive’s Maneater has arrived to hopefully satisfy shark fans’ hunger.

Maneater features a full storyline, open world, RPG-style upgrade system, and realistic underwater environments created using HD photogrammetric assets from Quixel Megascans. In other words, this is easily the most ambitious shark game to date. So, is Maneater the bloody-good time shark fans have been waiting for or does is sink under the weight of high expectations? Let’s dive in… 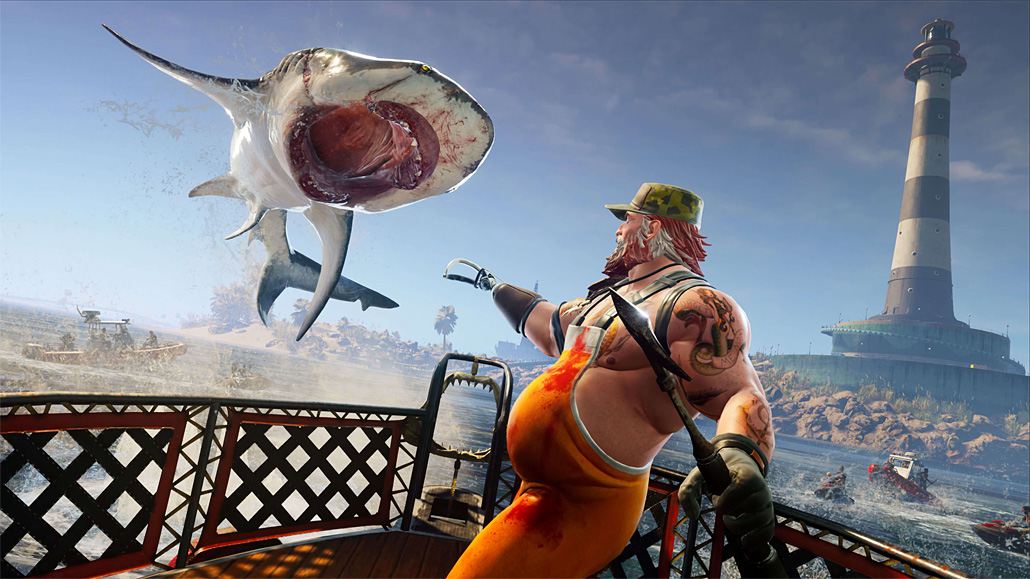 Maneater casts players as a juvenile bull shark, which grows into a massive mutant megalodon over the course of the game. Since you’re just playing as a dumb fish, Maneater injects some story and drama into its campaign by presenting itself as a Deadliest-Catch-style reality show. Each of the game’s chapters is punctuated by cutscenes featuring “Scaly Pete,” a gruff Cajun shark hunter you cross paths with repeatedly after you eat his hand, and the gameplay is narrated nature-documentary-style by SNL vet Chris Parnell. The story isn’t particularly engaging, as Scaly Pete isn’t likeable or relatable at all, but Parnell’s voiceovers elicit the occasional chuckle even if sometimes it feels this ought to be called “Dad Jokes: The Game.” Maneater’s tone is definitely a bit weird, as we’re provided with plenty of real nature facts and told repeatedly that humans are more of a danger to sharks than vice-versa…as you’re viciously destroying boats, attacking beaches, and gobbling up humans like popcorn shrimp. 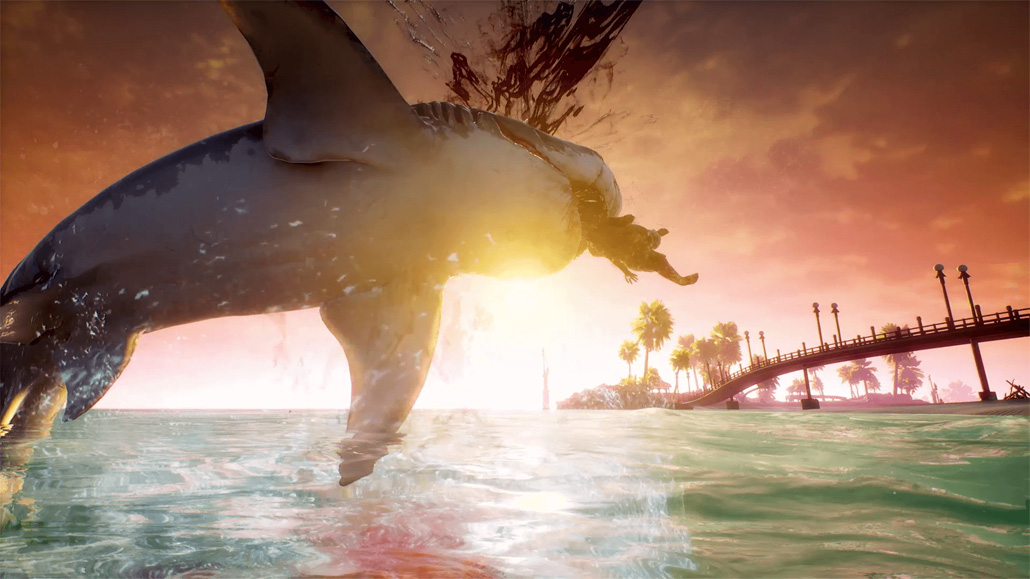 But hey, you don’t play a shark game for the story, and Maneater delivers the basic bloody action fin fans will be expecting. Silently gliding through the water feels good and chowing down on fish, seals, and unsuspecting swimmers is properly gruesome. There’s just something about the way your shark rips and crunches through victims that’s particularly satisfying.

Unfortunately, once you look past the fundamentals, Maneater has some serious issues. The game’s controls, which assign too many key functions to the shoulder buttons, are oddly clumsy, and it took me way too long to get a decent feel for the action. You can lock onto enemies, but your targeting is easily broken and often focuses on the wrong thing during hectic battles. Battling human hunters is frustrating, as the only way to beat them is to ram their boats repeatedly or awkwardly throw yourself on board and hope you can drag somebody into the water. You spend way too much time out of the water in general, as a number of missions and collectibles require you to pitifully flop about on dry land. There’s a reason Jaws didn’t include a scene where the shark bounced around in the middle of Amity Island's town square. 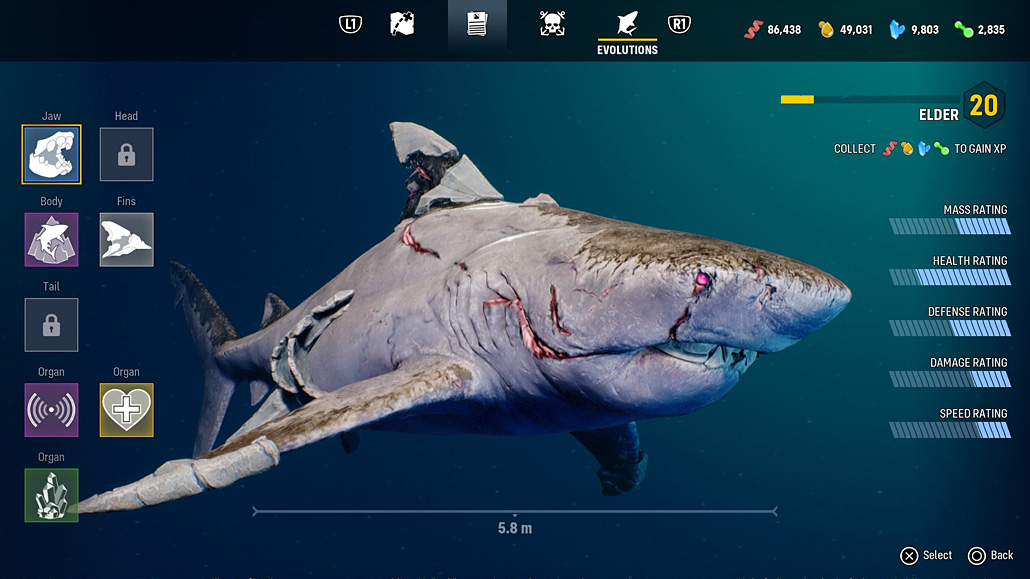 Maneater’s RPG systems are a good idea in theory, with players unlocking fanciful upgrades like electrified teeth and bone plating as you level up and complete missions. Each of these upgrades can be freely switched in and out and individually upgraded with various nutrients you gain from missions, gobbling sea creatures, and finding secret caches. The problem is one common to many games with tacked-on RPG mechanics – leveling up just takes too long. You start Maneater as a puny shark that can barely contend with a muskie or lone barracuda, and the game doesn’t begin to deliver that apex predator Jaws power fantasy until you’re nearly two-thirds of the way through the campaign. If you’re going to call your game Maneater, don’t force me to play most of the game as an ankle biter. 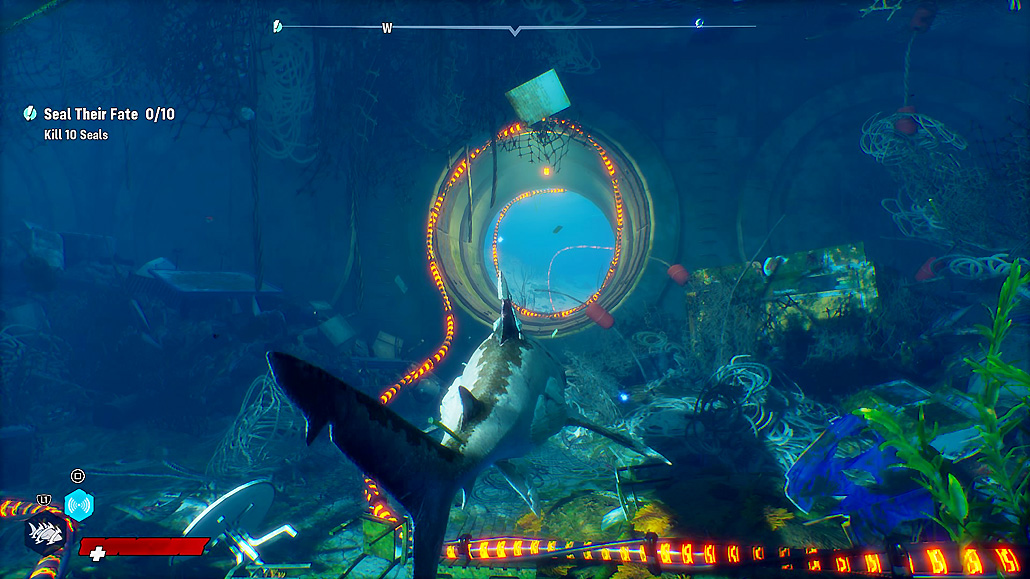 On a more positive note, Maneater’s level design is actually quite solid and varied. You’ll glide through swamps, rusty industrial wastelands, posh planned communities, glitzy beach resorts, and more, all of which are packed with secrets and interesting landmarks to discover. Sadly, as interesting as the underwater scenery often is, Maneater’s missions get repetitive very quickly. Every time you enter a new area, you’ll be presented with a familiar list of objectives – perform “population control” on a certain type of fish, fight and kill an apex predator, attack beaches and eat humans, etc. Rinse and repeat. Of course, copy-and-pasted objectives are common in open-world games, anybody who’s ever played anything from Ubisoft knows what I’m talking about, but it feels particularly blatant here. Also, once again, Maneater makes you wait for its best stuff. Early on you're stuck in murky, shallow, swampy areas – you’re only set free to stalk the open ocean relatively late in the game.

Visually, Maneater has its moments, particularly when you’re cruising beneath the waves, although the game can go overboard with the lighting and underwater cloudiness, sometimes making it difficult to see where you’re even going. Above water, the game can look a bit grungy, and the humans you’re terrorizing are laughably ugly. Despite its middling looks, Maneater has some serious performance issues, delivering an inconsistent framerate on the PS4 Pro and slideshow-like choppiness on the standard PS4. You can also expect plenty of crashes, weird glitches, and broken missions – often enemies I was tasked with fighting would go missing or I’d be told to kill more humans in an area than actually existed. Sometimes a reset fixed these issues, sometimes not. 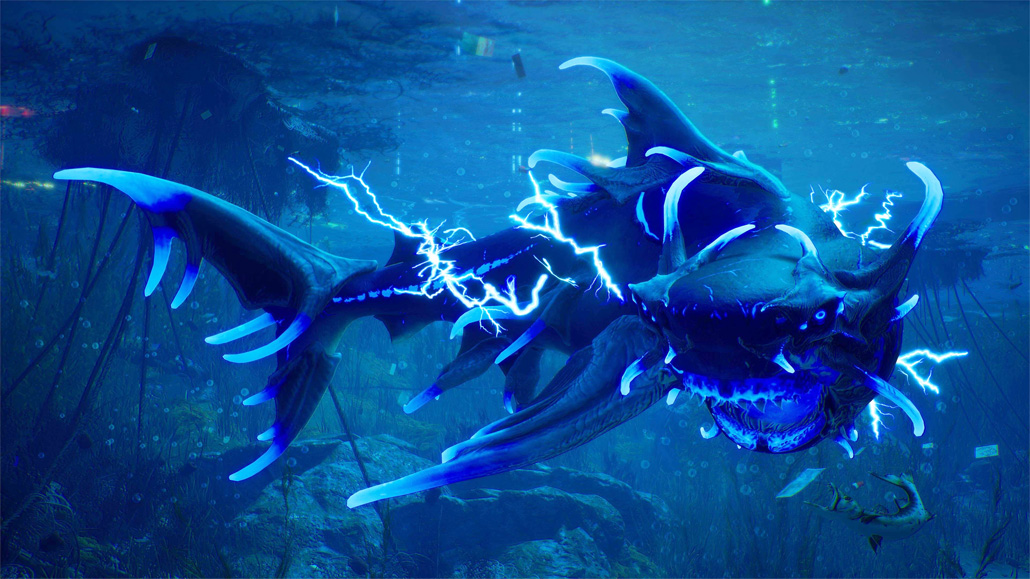 The issues I’m describing may sound pretty egregious, but Maneater isn’t a particularly challenging or high stakes game. There’s no real punishment for dying, you’re just sent back to the nearest grotto with your mission progression intact. You don’t need to complete every mission and challenge to progress the game. So yes, the game is can be rough, but again, chomping stuff is fun in a basic lizard brain sort of way, and I found the time passed surprisingly easily as I messed around. And there’s a solid amount of messing around to be done. Maneater’s campaign will take you 10 to 15 hours to complete and cleaning up every mission and collectible could take you nearly twice that long. At only $40, you’re getting a pretty decent bite for your buck.

This review was based on a PS4 copy of Maneater provided by publisher Tripwire Interactive.

Maneater isn’t exactly Jaws, but it isn’t Sharknado either. Crunching up hapless beachgoers and exploring underwater wonders is fun, even if the game’s bite is often blunted by clunky controls, repetitive missions, and a myriad of technical issues. Proceed with caution, but if you’re into sharks and can keep your expectations in check, Maneater’s treacherous waters may be worth wading into.