This review is of a Razer Leviathan Mini bluetooth speaker which was provided by Razer for review purposes. Reviewed at $179.99 (Amazon US) and £129.95 (Amazon UK).

If you’ve followed some of my musings on the site, you may know I’m a fairly big guy. I’ve moaned about stuff that’s too small several times. Small cars, small cups, small mice, small plane seats. I also dislike small TV’s, small cinema screens and lots of other small stuff. Miniaturisation has done amazing things for technology over the years but the argument has always been that if you wanted the best, you need big.

But that’s not right, some things got better as they got smaller right? Maybe you remember the huge old Sony Walkman (What’s the plural of a Walkman, Walkmen?) from the early days. What about the massive cell phones on their battery packs? Maybe the big CRT monitors and TV’s, 8 inch floppy disks or computers that took up entire rooms and were less powerful than the phone I had 5 years ago. 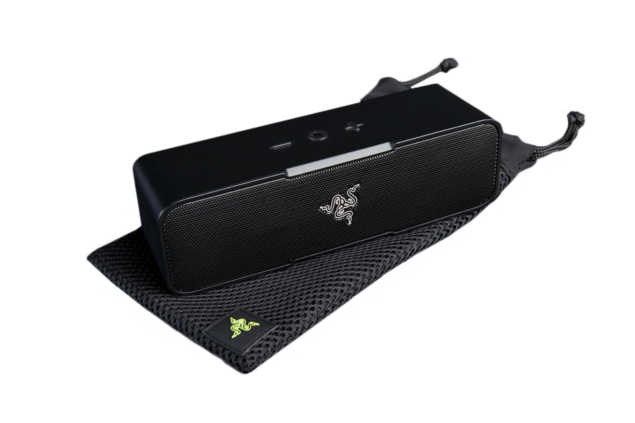 The Razer Leviathan Mini. Bigger is better, or is it?

So despite the bigger is better adage, there’s clearly a mix. Now for someone like me who has been a bit of an audio geek in my time (although I wouldn’t say an “audiophile” since I was more into multi-channel sound home cinema), up until a few weeks ago I was of the unshakeable conviction that when it came to audio, bigger was better. More components, bigger speakers, more speakers, bigger wattage counts etc etc. If you wanted a better 3D positional audio experience? Absolutely no question, you needed a standard with more channels. We’ve gone from 1 to 2 then 4, 5.1, 7.1 and now you can even get 22.2 channel setups. The more speakers you have, the more you can make it sound like sound is coming from somewhere.

That was until I tried out OSSIC (check out my preview article of them here). Bigger was definitely better for a long time, but the trouble with bigger being better is that you reach a limit in terms of feasibility and cost. At some point in time, you need to work smarter, not harder and that’s what OSSIC did with their HRTF headphones and algos for 3D positional audio. All of a sudden I’m living in my own personal paradigm shift and don’t know what to make of it.

So although every fibre of my (previous) being tells me that the Razer Leviathan Mini is doomed to be an awful sounding piece of rubbish that Razer made the mistake of designing, building and slapping their logo on to, part of me is questioning whether it may actually be…

The Leviathan Mini has a pretty standard frequency response range covering from 50 Hz to 20 kHz. Most standard audio products concentrate on the 20 Hz to 20 kHz range as this is generally accepted as the average range of hearing that most humans have although this varies from person to person. Additionally, the range tends to start wider and reduce as we age. What you may see advertised as “high definition audio” is sound that will often include frequencies outside of the standard 20 – 20 range.

In ideal conditions, the range can increase, but being reasonable, very rarely will most of us use our audio gear in what could be considered “ideal conditions” (think commercial recording studios, sound testing labs etc).

Much of the “high definition audio” equipment which you’ll see advertised with ranges from single digit Hz to 40+ kHz (100 kHz for the $55,000 priced Sennheiser Orpheus headphones!) are all well and good, but generally you’ll find most companies tend to at a minimum split their focus from providing higher ranges to increasing the quality of the range that most people can hear.

Couple all of this with the fact that I still know a lot of people who listen to mp3’s on their phones with the phone supplied earbuds rather than any of the lossless audio formats and you may be wondering what the point of this high range equipment is.

On the off chance that you’re not aware of how much you lose in the conversion to mp3, I encourage you to go and check out this link:

where you can hear a recording of the sound lost from the original test control song in the development of the mp3 standard. Hint, you lose a surprising amount of sound.

Back to the Leviathan Mini. 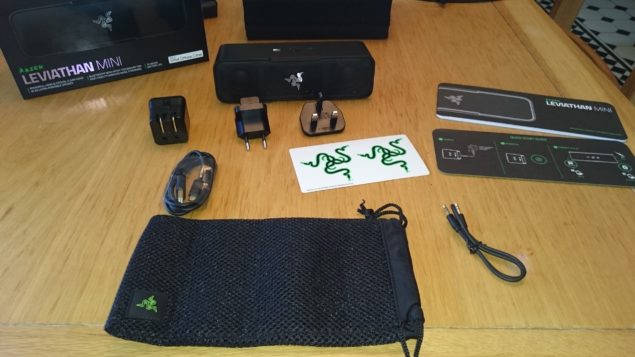 Everything is nicely packed and it will be easy to put everything back in its original place which for some reason I like, despite the fact that I almost never do it. Pulling the Leviathan Mini itself out of the box I’m relatively surprised by the heft the little guy has. It’s not heavy, but for its size I expect it to weigh less than the 1.2 lbs or 550 g it is.

There is also an omnidirectional microphone on top of the Leviathan Mini for taking calls as it’s obviously likely you’ll use this thing with your phone. It supports audio input over Bluetooth 4 with aptX which Razer claims gives “impressive CD-like audio quality”. We’ll have to see about that.

The impression out of the box is of a cleanly designed and nice looking piece. The volume and multi-function buttons on top look well placed and the Razer logo on the front is unobtrusive.

Turn it around and on the two ends are a couple of extra things. A small NFC logo on the left side while the right side has the power/bluetooth buttons, auxiliary input and micro USB slot to charge it with. The back is a clean grille, like the front but without the Razer logo.