Resident Evil 2 is a mostly top-notch remake, but I’d argue the game sticks a touch too close to the source material. Fresh characters, moments, or modes are relatively rare. Thankfully, Capcom has just released The Ghost Survivors, a new batch of free DLC that lets you take control of four previously-unplayable Resident Evil 2 characters.

The Ghost Survivors serves up a series of alternate-universe missions in which you play as supporting players who bite it (or, rather, get bit) in the main story – posh mayor’s daughter Katherine Warren, gruff gun shop owner Robert Kendo, Umbrella Security Service soldier Ghost, and a fourth character I won’t spoil. It’s certainly a clever concept, but does the DLC do these characters justice? Will The Ghost Survivors keep survival horror fanatics satisfied or will it quickly fade from memory?

If you’re expecting niceties like story, exploration, or puzzle solving from The Ghost Survivors, you’re going to be disappointed. The DLC instead serves up a series of short action-based challenges, which are preceded and followed by quick, cheapo still-image cutscenes. In “Runaway” Katherine Warren kills Chief Irons and sets out in her finest romper to rescue boyfriend Ben Bertolucci from the police station holding cells. In “No Time to Mourn” Robert Kendo opts not to end it all and instead embarks on a daring escape through the sewers. In “Forgotten Soldier” Ghost battles through the Umbrella labs to recover the G-Virus.

The Ghost Survivors’ missions are difficult, occasionally to a borderline unfair degree. The DLC likes to load on enemies in quantities and combinations that sometimes seem almost insurmountable. Each mission can be played on “Training” difficulty, but even then you need to keep your wits about you – Training basically just reduces the difficulty to around the same level as the main game. Action-heavy extra modes like this worked well enough in games like Resident Evil 4 and 5, because, well, those were action games. Resident Evil 2 isn’t really, and trying to combat hordes of enemies when you can’t move faster than a light jog and lack decent melee skills can be irritating.

That said, The Ghost Survivors does offer up some new mechanics and enemies to keep things interesting. Some zombies carry backpacks containing keys and vital goodies, and you’ll occasionally come upon vending machines, each of which gives you the option of picking up one of three different items. Each mode also includes a new zombie variant – Runaway has the gruesome Pale Heads, which can only be killed with high-powered ammo, No Time to Mourn has zombies that explode into clouds of poison gas when killed, and Forgotten Soldier throws heavily-armored undead (and Mr. X) at you. There’s certainly some satisfaction in figuring out how to survive each mode and then perfecting your playthrough. I’m not typically the speedrunning type, but even I felt some of that “just one more try” allure.

Each of The Ghost Survivors’ modes can be finished in 5 to 10 minutes (even less than that once you've mastered them), although it will take longer than that to beat each the first time. Expect a lot of dying and retrying, especially if the action parts of Resident Evil 2 aren’t your strong suit. Personally, I sunk a solid three hours into The Ghost Survivors trying to get my times down – will I be back to further perfect my runs and grab more goofy collectibles? I’m not entirely sure, but hey, considering the content’s free, I’ve already got more than my money’s worth.

Resident Evil 2 The Ghost Survivors was played on PS4. The original review copy of Resident Evil 2 was provided by publisher Capcom. You can purchase the full game via Amazon. 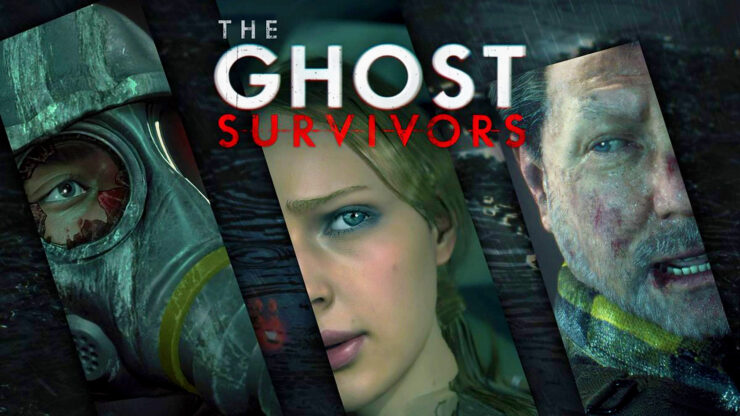 The first chunk of Resident Evil 2 DLC doesn’t really play to the game’s strengths. Capcom’s remake was all about pacing and atmosphere, while The Ghost Survivors is a simple shoot ‘em up that may be too difficult and one-note for many fans. That said, if you enjoyed Resident Evil 2’s action and get a thrill from shaving seconds off your best times, The Ghost Survivors should keep you running for a while.