Remothered: Tormented Fathers got a lot of attention from hardcore horror fans back in 2018, and not just because of its rather odd title. The game offered up plenty of atmosphere, decent stealth gameplay, and a lurid, twisting story seemingly inspired by old-school Italian giallo horror films (the game’s creator, Chris Darril, hails from the country). Personally, I thought Wccftech’s Francesco De Meo was a touch generous in his 8 out of 10 review of Tormented Fathers, but the game certainly showed promise, and I was interested to see where the series might go next. Enter Remothered: Broken Porcelain, the second in a proposed trilogy of games.

Does Remothered: Broken Porcelain take its predecessor’s scares and bizarre story to the next level? Or is it just another disappointing horror rehash? Time to examine all the pieces of Broken Porcelain… 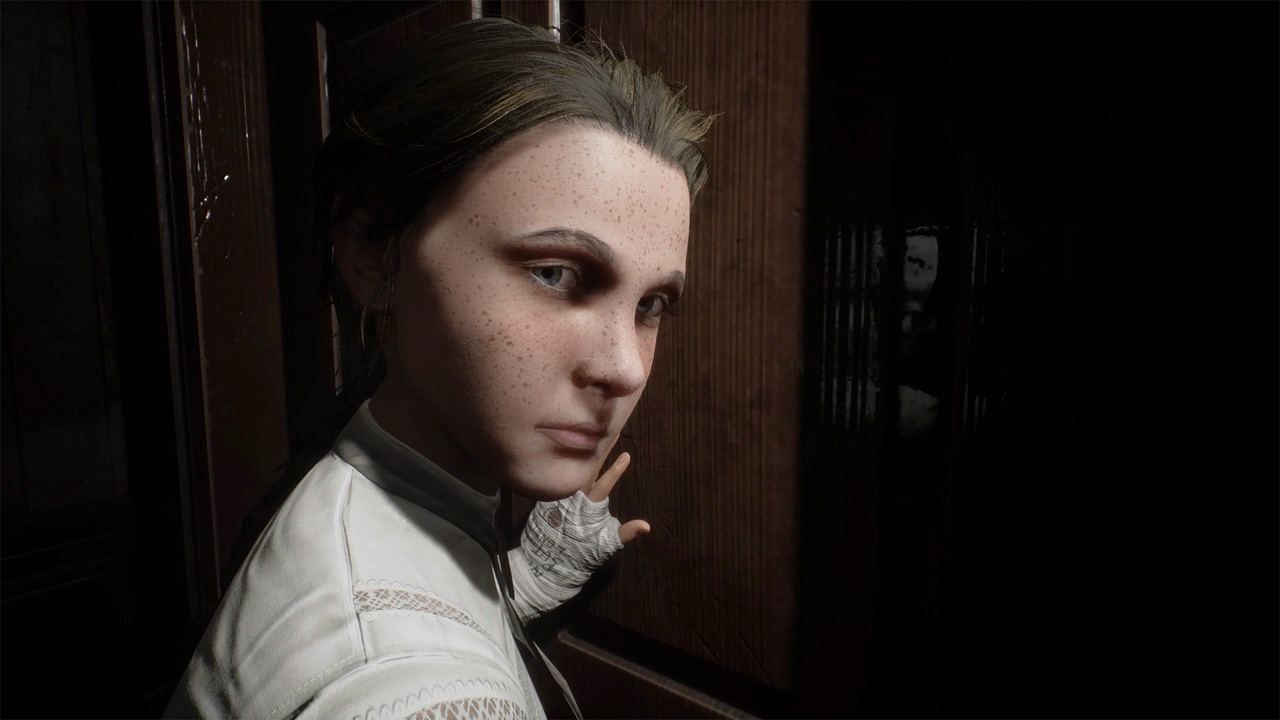 A recap of the plot of Remothered: Tormented Fathers would take up most of this review, but briefly, the game cast players as a woman named Rosemary Reed as she searched for Celeste Felton, who went missing as a teenager. During her investigation, Rosemary uncovered numerous Felton family secrets and a plot surrounding an experimental drug named Phenoxyl, which is intended to treat PTSD, but ultimately drives its subjects mad. You never end up finding Celeste but uncover clues pointing to a couple of locations – the Flemmington Girls' Institute and the Ashmann Inn.

In a clever twist, Remothered: Broken Porcelain largely takes place around 20 years before the events of Tormented Fathers, with players actually taking on the role of Celeste (or “Jennifer” as she’s referred to for most of the game). Our heroine is working as a maid at the creepy Ashmann Inn, which you’ll gradually discover has deep connections with both the Phenoxyl plot and Celeste/Jennifer’s own personal history. The plot kicks into motion when Jennifer has had a falling out with her friend Lindsay, but before you’re able to hash it out with her, the housekeeper Andrea is seemingly driven into a murderous rage by Phenoxyl poisoning. Much sneaking, running, and hiding ensues. 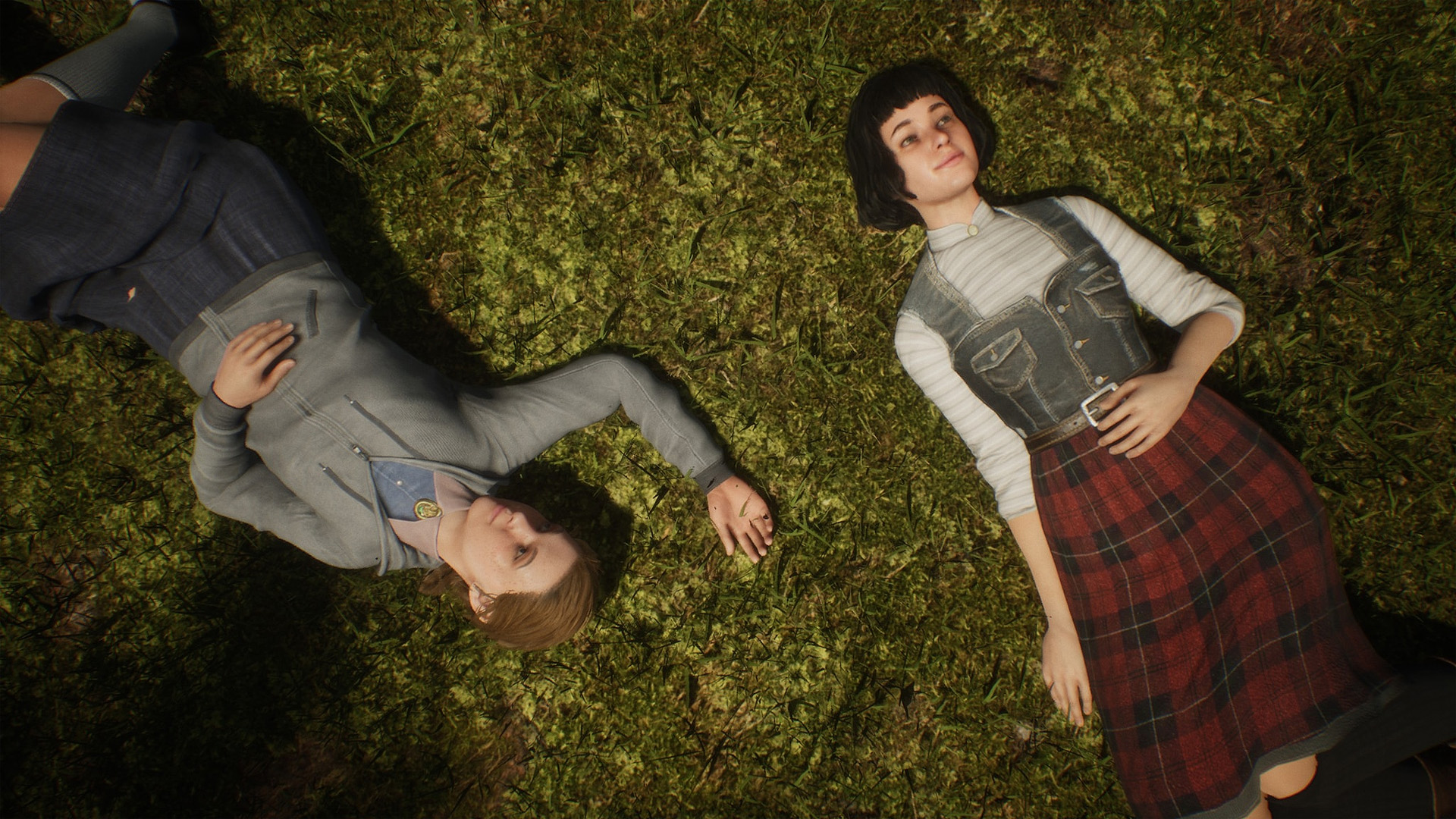 While I was expecting another labyrinthine plot from a new Remothered game, things go from convoluted to downright incomprehensible this time around. The plot jumps between time periods and locations with little explanation and the behavior of characters can change radically from scene to scene. It feels like chunks of the story have been left on the cutting room floor. When not confused, you’ll likely be rolling your eyes. The teased romance between Jennifer and Lindsay mostly avoids Tormented Fathers’ sometimes-ugly stereotypes, but it’s rushed through, maudlin, and ultimately inauthentic feeling. Eventually, a few revelations about Jennifer and other characters from Tormented Fathers are uncovered, but this doesn’t feel like an essential next chapter in the series’ overall story.

Remothered: Broken Porcelain has received a fairly extensive visual makeover, with characters looking much more natural than the odd mummy-like cast of Tormented Fathers. Unfortunately, the game’s environments have not undergone a similar glow up. In fact, I’d say they’ve lost some level of detail and atmosphere. Tormented Fathers had a certain old-school survival horror charm while Broken Porcelain just looks like any other modern low-budget horror game. Broken Porcelain’s soundtrack has its moments, but overall sloppy handling of the game’s audio kills any additional ambiance it might have created. 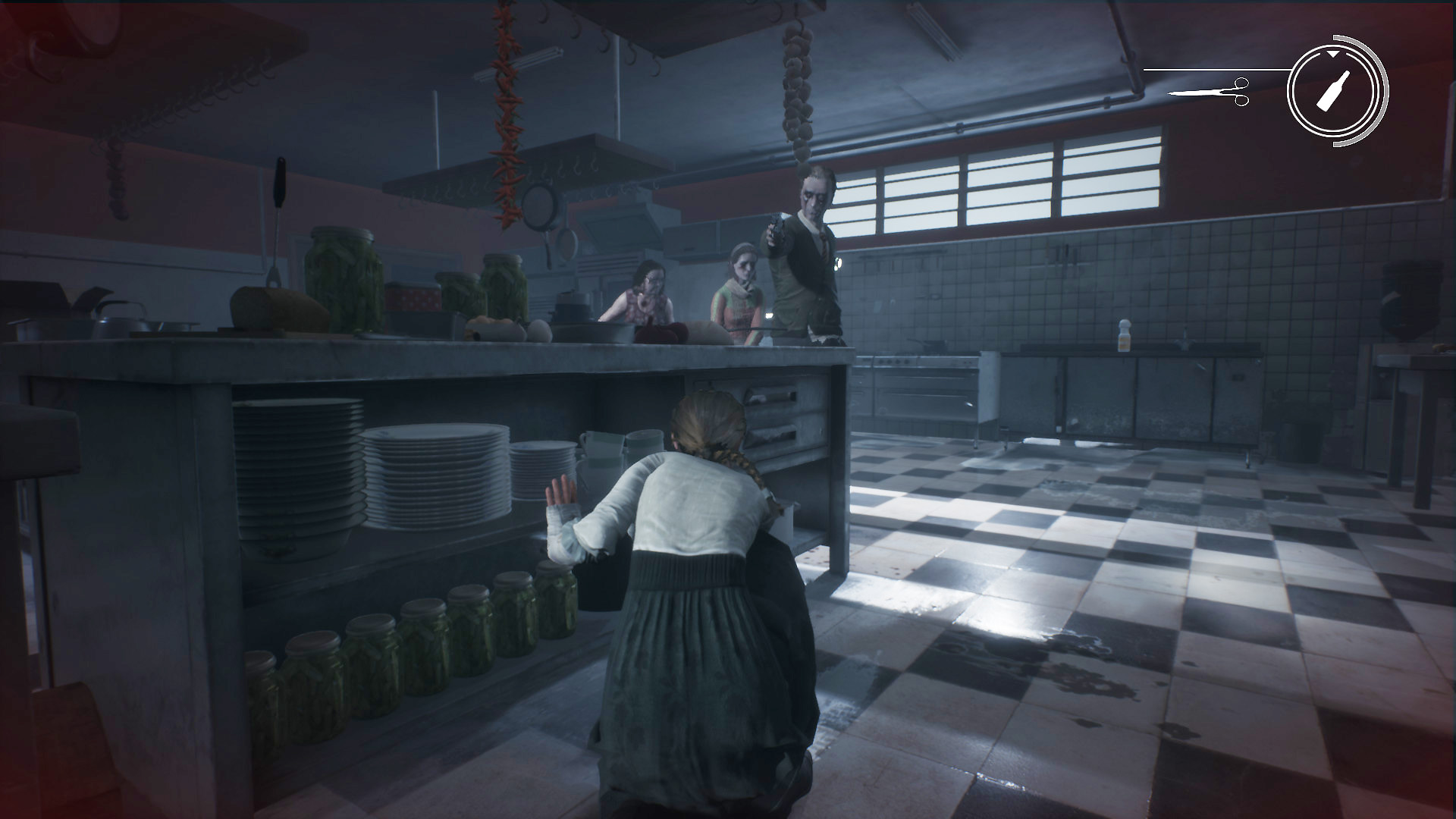 In terms of gameplay, Remothered: Broken Porcelain mostly sticks to the established blueprint. You still explore, collect and craft items, and try to outwit various murderous stalkers. Players do have a few new abilities at their disposal, including the ability to use a defensive weapon to attack enemies from behind, but unfortunately the series’ controls have taken a turn for the worse. Jennifer either creeps around at a glacial pace or charges around like a rhino, with no speed in between, and all too often I found those new sneak attacks just didn’t work.

Stealth feels arbitrary, as the game doesn’t make it particularly clear what your adversary is able to see or hear and they only have two modes, “completely oblivious” or “frantically attacking.” Enemy AI doesn’t seem to follow any real rhyme or reason, and while I’m not 100 percent sure this is the case, there were numerous times where it felt like they were just warping around the map. Dealing with stalkers doesn’t feel like a fun game of cat and mouse, particularly when your dumb opponent gets lost and you have to track them down so they’ll give chase. But why would you do that? Why not let them stay lost? Well, unlike its predecessor, Remothered: Broken Porcelain puts a heavy emphasis on confronting your stalkers in a series of boss fights. Heck, this is practically an old-school boss rush game. 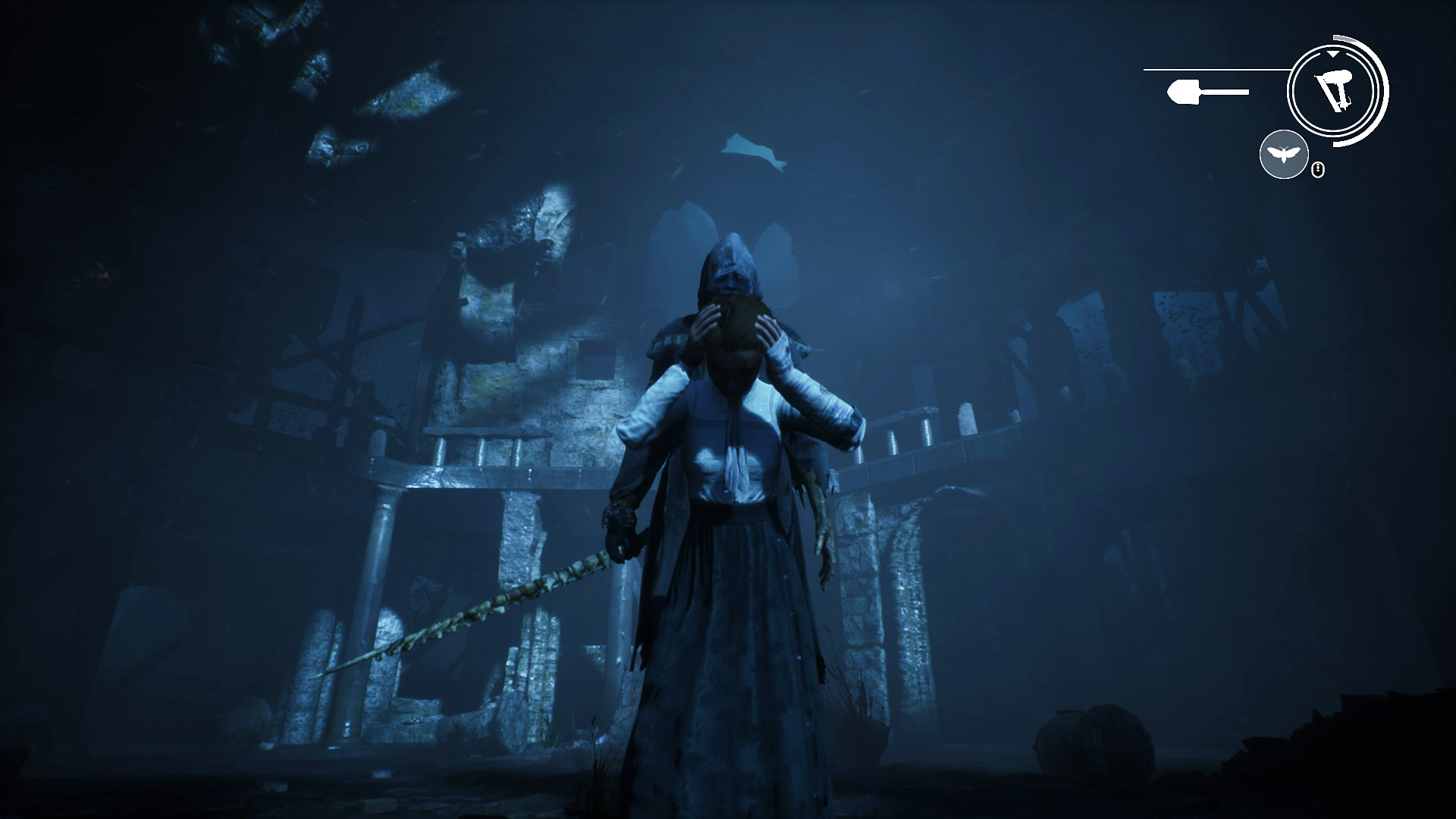 Each of these boss battles is irritating in its own special way, combining the game’s already-clunky controls with poorly-explained new mechanics. For example, at one point, you’re told to use a fire extinguisher to defeat a boss, but not how to actually use it. I assumed you had to stun him with the extinguisher then stab him from behind and wasted a solid 20 minutes before I discovered you just have to spray him multiple times until a cutscene triggers. A later fight requires you to shoot small lightbulbs at just the right moment to make the boss vulnerable, which is frustrating enough on its own, but the game also doesn’t clearly indicate where the baddie’s weak spot is. I’m not sure I ever really figured it out -- I just kept firing until I scored a few lucky shots. 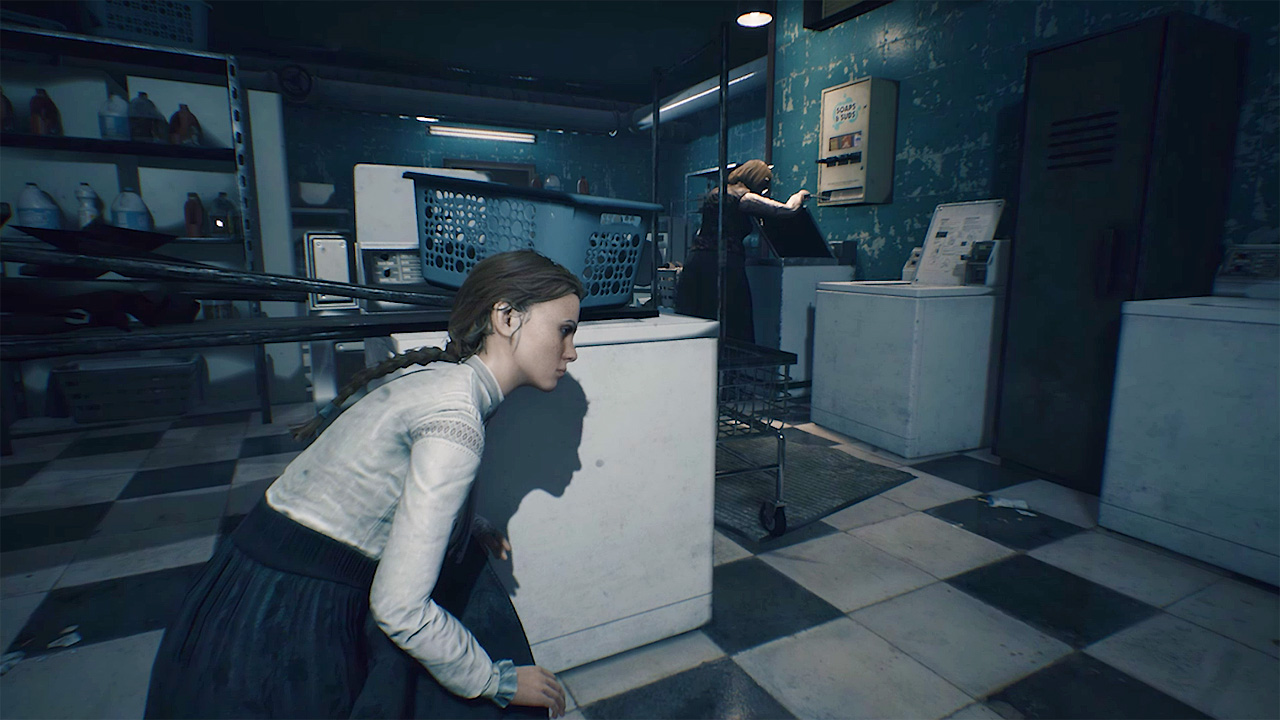 Aside from the boss fights, the other new focus is Jennifer’s “Moth Eye” power. This basically allows you to briefly enter a first-person perspective, fly around rooms without enemies taking note, and remotely interact with certain things. This may sound like a promising addition, but the controls are horrendous, and you’re often asked to asked to clumsily maneuver the Moth Eye cam around and through objects while under pressure from stalkers. It’s a huge pain in the ass.

Perhaps the worst thing about the new fixation on boss fights and the Moth Eye mechanic, is that they largely replace more traditional survival-horror-style puzzles. The few puzzles found in Remothered: Broken Porcelain aren’t particularly satisfying or challenging. The real core of Tormented Fathers, the source of its tension, was trying to figure out puzzles as stalkers were breathing down your neck. Without any real brainteasers, serious exploration, or decent enemy AI, Broken Porcelain just feels…flat. Add a poorly-paced story that doesn’t take the time to build up any proper tension, and I found myself glancing at the clock way more than I should have given this game is only about five hours long. 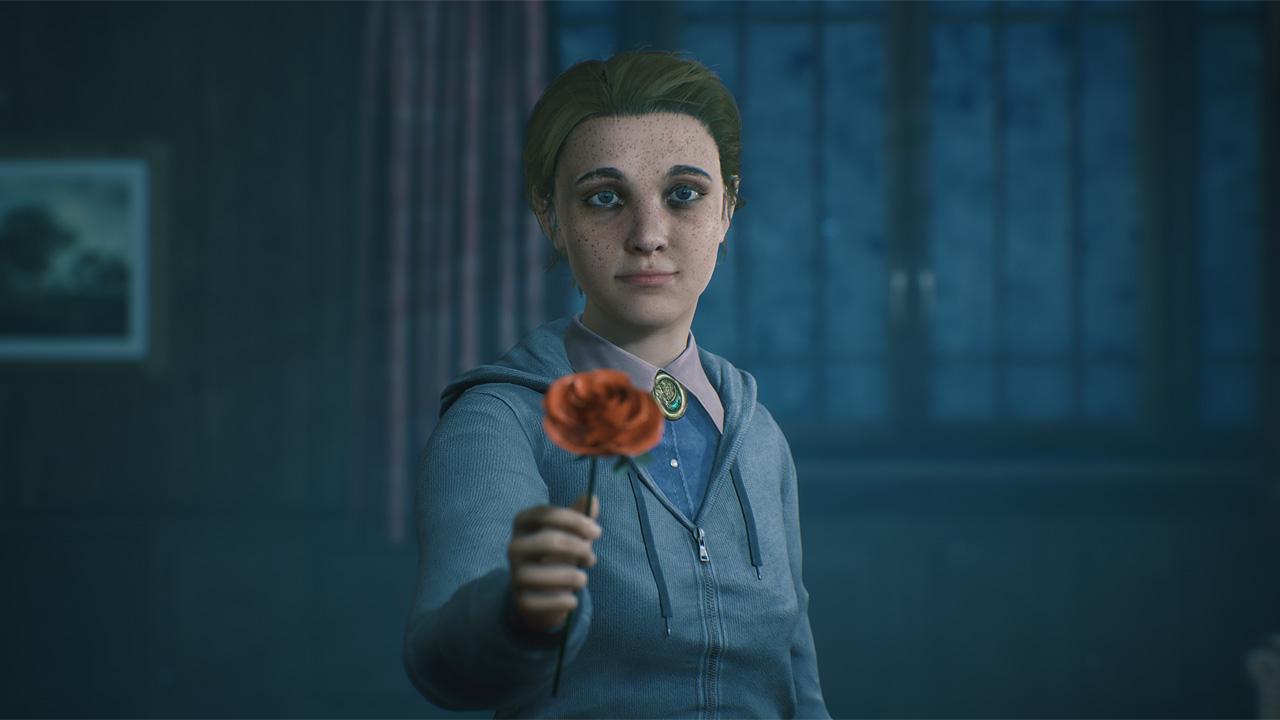 Well, okay, it actually took me over seven hours to beat Broken Porcelain, but only because I had to restart the game multiple times due to crashes and an array of progression-halting bugs. To their credit, Remothered developer Stormind Games have already released a number of patches addressing some of the game’s most egregious issues, but trust me, the game is still rough. If you’re looking for a spooky evening, you’re probably better off watching a couple of random horror movies on Netflix. You don’t even have to be particularly choosy – whatever you pick will probably be better than this game.

This review was based on a PC code of Remothered: Broken Porcelain provided by publisher Modus Games.

Remothered: Broken Porcelain is a textbook example of a bad horror sequel that mostly sticks to its predecessor’s formula, without really understanding what made it work. Between a jumbled story, shortage of tension, annoying new mechanics, and a flagrant lack of polish, Broken Porcelain in a follow up only a mother could love.