Nine years after its initial release, Red Faction: Guerrilla has been re-Mars-tered - you know, because it's set on Mars - by developer, Volition. Over the past couple of weeks, players have been returning to this cult title to experience its classic environmental destruction physics at a smooth 60FPS. If you missed Red Faction: Guerrilla the first time around, it's worth mentioning that it’s actually the third installment in the Red Faction franchise, set a full fifty years after the first game. With Earth’s natural resources running scarce, the Earth Defense Force (EDF) has enslaved the Martian race in an attempt to acquire precious commodities needed back on Earth. Joining the Red Faction rebels, players will fight back against the EDF to strive for a fairer deal for the Martians, wreaking havoc on the environment in the process.

According to the game’s Steam page, the Re-Mars-tered version features the following upgrades: fully reworked graphics, heavily reworked textures and graphics features adding, for example, specular maps, improved shadow rendering, improved Lighting, shader & postprocessing rework and native 4K support. So, what does this actually mean? Red Faction: Guerrilla now looks better and can be played at 4K resolution without the need for any modifications. Those playing on a PlayStation 4 Pro or Xbox One X will not be able to run the game at 60FPS when using the 4K mode. Thankfully, the base game runs at a solid 60FPS on both the stock Xbox One and PlayStation 4 consoles (at 900p and 1080p respectively).

Ultimately none of the changes truly matter as the game doesn’t look that much better. If you only ever played Red Faction: Guerrilla on the last generation consoles then you may find the changes to be significant. Coming from the PC version, it feels like very little has been changed. It’s a bit like putting makeup on a pig. Sure, the pig looks better compared to other pigs, but it’s still a pig, you know?

Aside from the visuals, this remastered version does nothing to alter the original gameplay which can be seen as both a blessing and a curse. Fans of the original game may appreciate this as it’ll be just as they remembered back in 2009, however, there are a number of changes the developers could’ve made to dramatically improve the game. Having to do the same repetitive missions to liberate an area gets boring really fast. There are only so many times you can go through the same ‘destroy this building’, ‘escort this person to safety’ and ‘protect these people’ missions without going insane. You cannot continue doing the main missions without going through several side-quests first. Sadly, the main story missions aren’t that much better than the side-quests. While the main missions progress the story further, they aren’t that much different from the side-quests except usually they are followed by a cutscene with poorly written dialogue.

Red Faction: Guerrilla Re-Mars-tered is the perfect example of the average PlayStation 3/Xbox 360 generation game. You’ve got your desaturated palette of browns and greys, repetitive tasks that don’t respect your time and clunky combat that only feels decent when using explosive weapons. Sure, it has the destruction system which is still impressive to this day, but that alone doesn’t bring the game to the higher standards that we have today. I found Red Faction: Guerrilla to be much more fun when played in short bursts and, as played out as it sounds, this is the type of game that would have been better suited to a system like the Nintendo Switch.

While many people may have forgotten about Red Faction: Guerrilla’s multiplayer modes, it remains intact on the remastered version. If you aren’t sick of blowing stuff up in the campaign then you can join your friends and blow up stuff together. Featuring six modes and twenty-one maps, there’s plenty to experience providing the game’s matchmaking doesn’t put you into empty lobbies. Speaking of bugs, the multiplayer section of the game appears to be full of them. The biggest problem so far is that players are finding themselves falling through the map. This isn’t just a one-off thing, it happens almost every single time you play. There aren’t many people playing the multiplayer modes on PC, but the few matches I did get into seemed to run well (latency-wise).

It shouldn’t come as surprise to anyone that Red Faction: Guerrilla Re-Mars-tered runs just as well as the original game. I’ve had a few issues with the game freezing every ten minutes or so for roughly half a second, it isn’t a deal-breaker by any means but it certainly is annoying. The PC version of the game can natively run at 4K and refresh rates above 60Hz (all the way up to 240Hz). Speaking of the PC version of this game, people that own the original game on Steam will be happy to know that the remastered version is available to them for free.

Review code provided by the publisher. You can purchase the game via Amazon for PlayStation 4 or Xbox One, and for PC via Green Man Gaming. 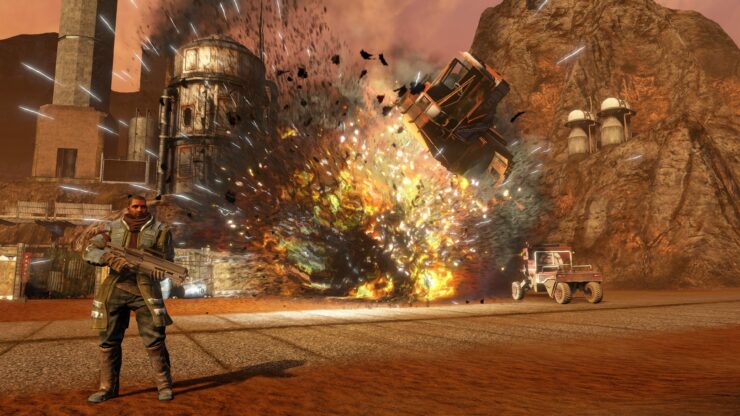 Red Faction: Guerrilla’s biggest strength is without a doubt the sheer amount of fun you can have smashing things across Mars. Sadly, that initial enjoyment doesn’t last long as you proceed to do the same missions over and over again. Is this game worth picking up, or even worth replaying? For the sake of nostalgia, it might be nice to boot up the game just to relive old memories, but I wouldn’t recommend purchasing this title. Despite launching at a reduced price and even being free in some instances, I would suggest playing something else. The standards for open-world third-person shooters has risen far beyond Red Faction: Guerrilla. Skip this game unless you are a huge fan of the original, or you just really love breaking stuff.

The Story of Just Cause 3 has Drama, Laughs and Tons of Explosions