Razer has been fighting their way up the ranks of controller peripherals over the past few years. First being known exclusively for consumer and competitor-grade PC hardware, Razer slowly expanded into console peripherals before making a few attempts at tools that appeal to the arcade and fighting game enthusiasts, first with the Razer Panthera and other full-sized arcade sticks. For those that want something that can fit in a travel bag, the only game in town was HORI if you wanted something compatible with PlayStation 4. While it missed the chance to be unveiled at EVO Las Vegas, the new Razer Raion controller fits nicely into the fight pad mold and will be available in time for Tekken 7's winter update.

The Razer Raion features a full array of buttons despite its unconventional design. Sure, you don’t get access to the two analog sticks, but a handy switch at the bottom of the controller lets you toggle between using the disc pad as a directional pad or either of the PS4 analog sticks on the fly. The same works for the four shoulder buttons on the Razer Raion: either choose between the traditional PlayStation layout up top or L3/R3 on the left half and R1/R2 on the second half, something that grew popular in Street Fighter for the triple punch and triple kick button options. 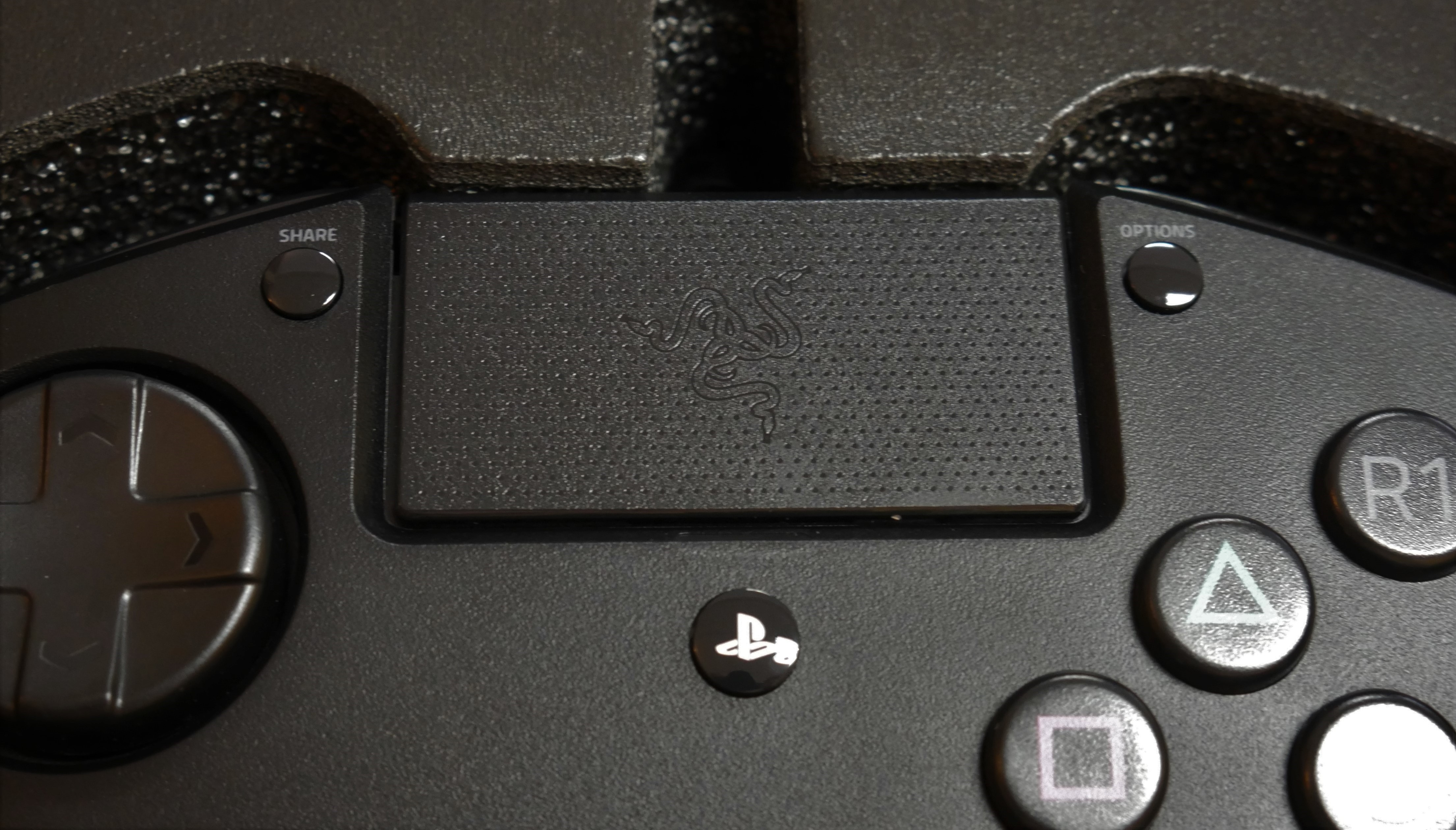 For tournament players, accidental button presses can lead to an instant loss, no matter if you’re still swimming in pools or playing on the main stage. Because of this, nearly every controller developed for pro fighting game players has a lock-out in some way that disables any buttons that aren’t required for regular gameplay (on PlayStation 4, this typically means the Share, Options, and PS buttons). The Razer Raion is no exception to this rule; there are two separate buttons to adjust headset volume and a mic mute. Pressing both of these buttons will activate the tournament lockout and disable the Options button just in case your fingers stray too far away from the main face buttons.

Each of the Razer Raion’s six face buttons are hypersensitive and take some adjustment to get used to if you’re conditioned to the medium resistance on a DualShock 4 controller. Requiring little more pressure than simply resting your thumb on the button, these Razer switches activate and register an input at just a fraction of the time it would take on stock PS4 hardware. For fighting games that require actions to be input within fractions of a second, that miniscule amount of time can make all the difference between a stylish parry or taking a full combo to the face when it comes time to compete.

I played the entirety of the classic Aladdin and The Lion King games with the Razer Raion as well as the usual slew of fighting games that I own on PlayStation 4. For fighting games, the Razer Raion was absolutely perfect. Razer’s unique d-pad disc brought many a victory to my Waldenstein play while the buttons held up to every amount of pressure and stress I could throw at them. I’m not too proud to not admit that I mashed out on this controller and not once did I feel the buttons start to loosen up or give up (which is more than I can say about myself personally). At the other hand, trying to play platformers and less-traditional titles weren’t quite as ideal with the Razer Raion. Given how sensitive each face button is, I’d often brush up against the jump button or press it in earlier than I was conditioned to do on a standard DualShock 4. Sure, you can certainly play any other game that doesn’t require both analog sticks on the Razer Raion without too many issues but it truly shines when put to the test in a proper fighting game. I’d be doing Razer a disservice if I didn’t mention that the Razer Raion was immensely comfortable to play visual novels one-handed (that sloped grip is far more comfortable than either the stock PlayStation 4 or Xbox One controllers for this purpose).

The floating disc that makes up the Razer Raion’s directional inputs is a bit stiffer than the other buttons but built to take more punishment. With a convex shape that contours to the user’s thumb the raised outer edges of the disc make up a nice groove to slide on into with the center of the disc being the deepest point of the convex design. All four cardinal directions are raised up and there’s enough break in between each direction to get a clear feel for the diagonal directions. Whether you roll the directional pad with the tip of your thumb or the base of the pad, the Razer Raion’s directional disc is comfortable enough to quickly input directions while the raised etchings won’t tear away at your thumb, unlike certain other pad manufacturers. 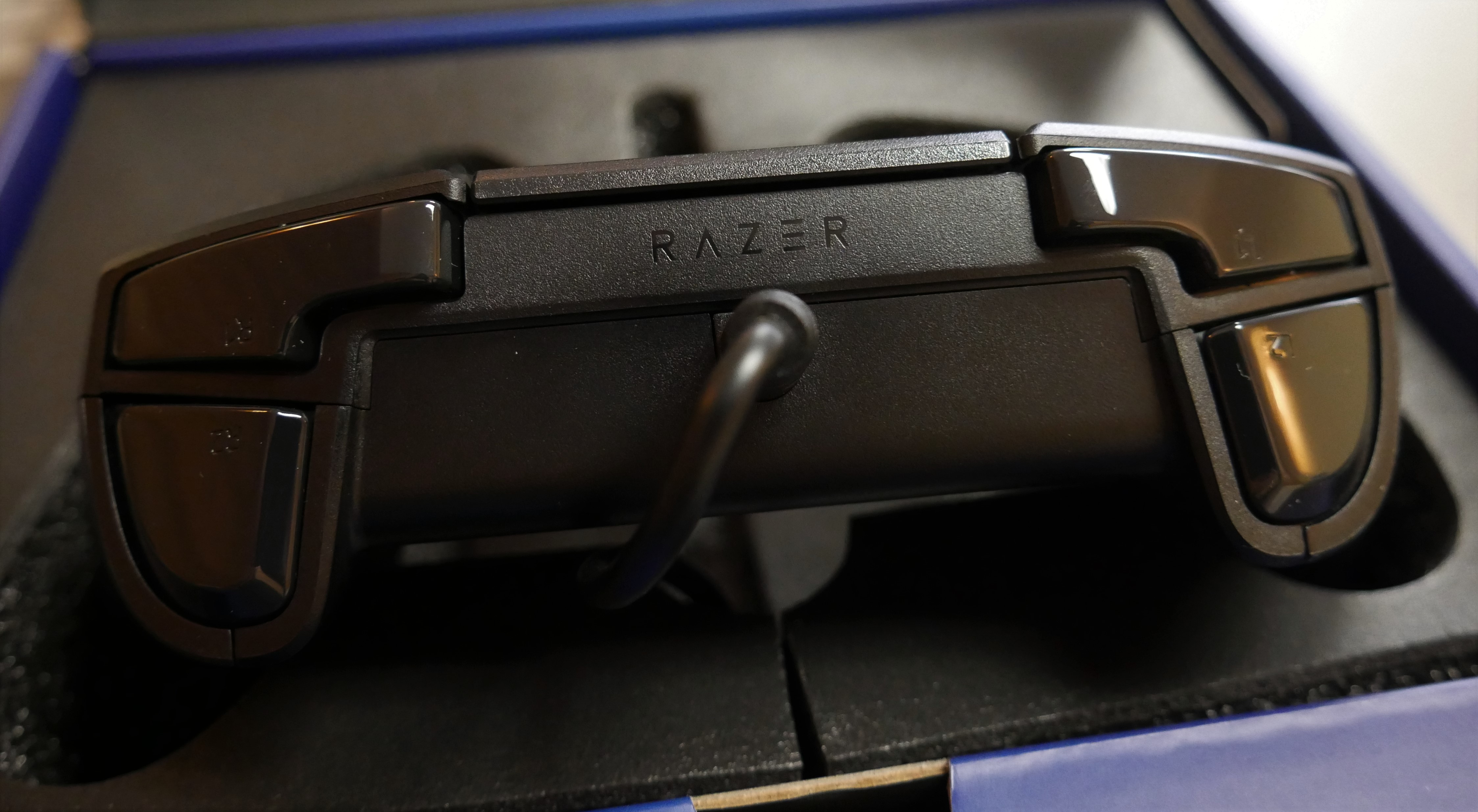 One feature that I adored on the Razer Raion that isn’t featured on the HORI Fighting Commander are elongated hand grips on both sides of the controller. Some complex inputs in Street Fighter V require more buttons than you can quickly reach with just your thumb. Having a place to rest your palm when tapping inputs with the rest of your fingers is such a simple yet major improvement to longterm comfort. Both elongated grips offer a gentle slope that contours to the natural curves of the user’s hands. If you’re primarily a pad player, I dare you to find a fight pad that’s as comfortable as the Razer Raion.

The entire design of the Razer Raion takes the most sought after tools for a fighting game player and injects them into a comfortable fight pad. Hyper-responsive face buttons, a directional pad that can hold up to punishment, a touchpad (still not standard on every arcade stick in 2019) and a tournament lockout all come standard on Razer’s first fight pad controller. If you want to up your game and a full-sized arcade stick isn’t the upgrade you’re looking for, the Razer Raion is hands down one of the best new controllers of 2019.

The Razer Raion fightpad fits into a very specific niche market: those that want precise, sensitive buttons but don't want to pack up an entire arcade stick. It's engineered for one single genre of video game and excels more than any other pad on the market at that singular focus.