The timing for the Disney Classic Games collection of Aladdin and The Lion King couldn't be farther from what I'd expect. Both newly released films have already run their theatrical releases but at least this release of classic platformers could be tied to that of the Blu-ray releases (The Lion King only just hit store shelves last week). For fans that are watching either of the new movies, or aiming for a rewatch of the classics on Disney+, is the Disney Classic Games collection one hit ahead of the flock? 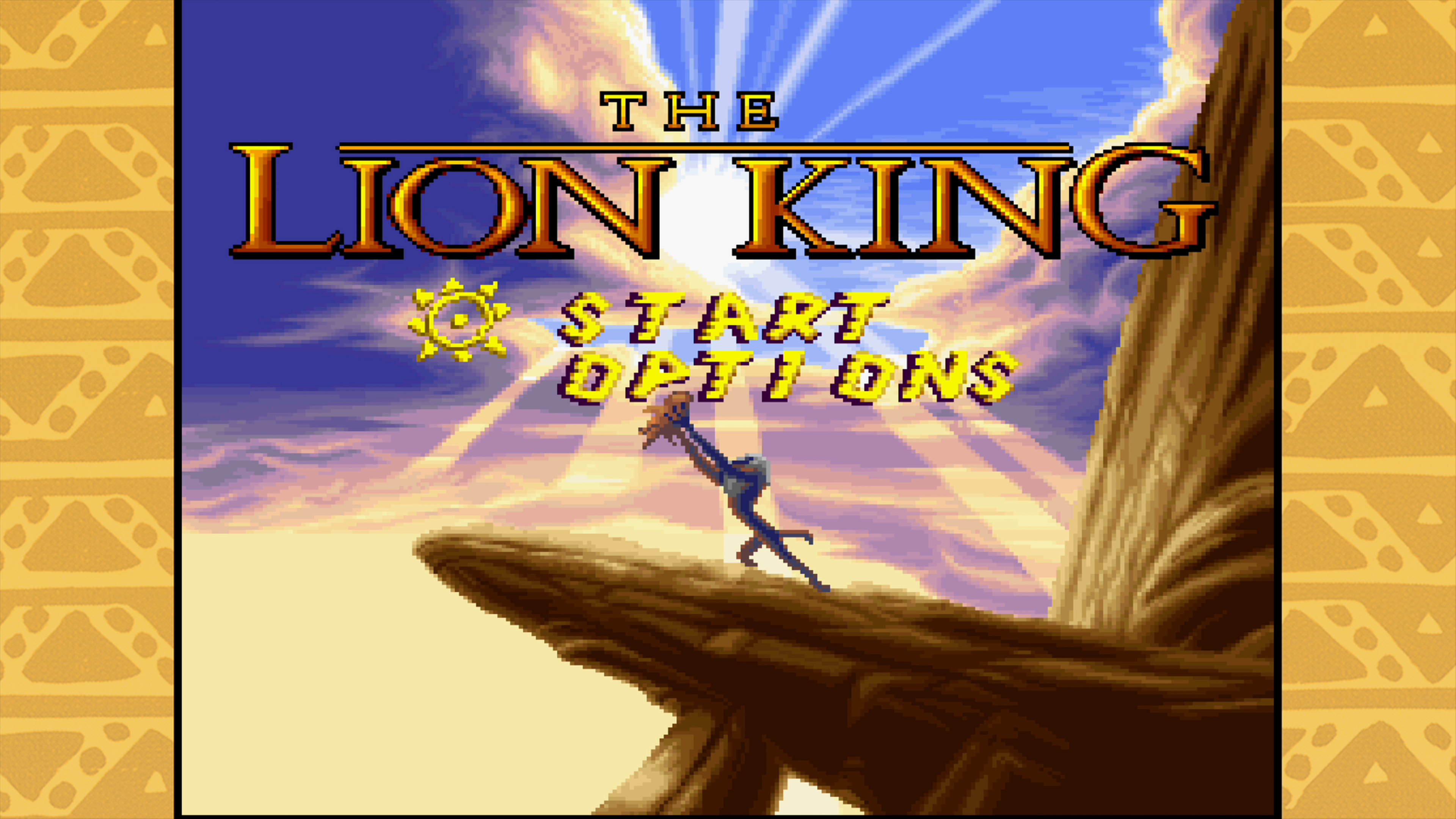 Neither The Lion King nor Aladdin need much introduction for their premise, holding the title of being two of the most popular games to be based off of classic movie franchises (animated, mind you. No need to worry, Wayne's World and Little Nicky, no one's taking *that* title away from you). Both titles in the Disney Classic Games collection follow the story beats from each movie while breaking them into shorter chapters, usually with some sort of minigame or flying segment dotted throughout. Back in their heyday, both Aladdin and The Lion King were notorious for being punishingly difficult, with the latter being a much more difficult title to beat on a Saturday afternoon. Now, with the magic of modern emulation and a handy rewind button, a new generation of gamers can see for themselves what made this collection so memorable.

Disney Classic Games: Aladdin and The Lion King's roster of playable titles covers more than just the most popular version of each title. The Lion King boasts four playable versions of the game: Console N and Console S (I'm sure you can guess which these are), a Japanese version (based off the N version), and both black & white and colorized Game Boy titles. On the other hand, Aladdin features the same two handheld versions as well as the original English and Japanese Sega Genesis releases as well as a brief, unfinished trade show demo. You might notice that there's no 'Console S' release to Aladdin as unfortunately, that title was developed by Capcom and remains one of those numerous licensed titles to be locked away in a vault somewhere. 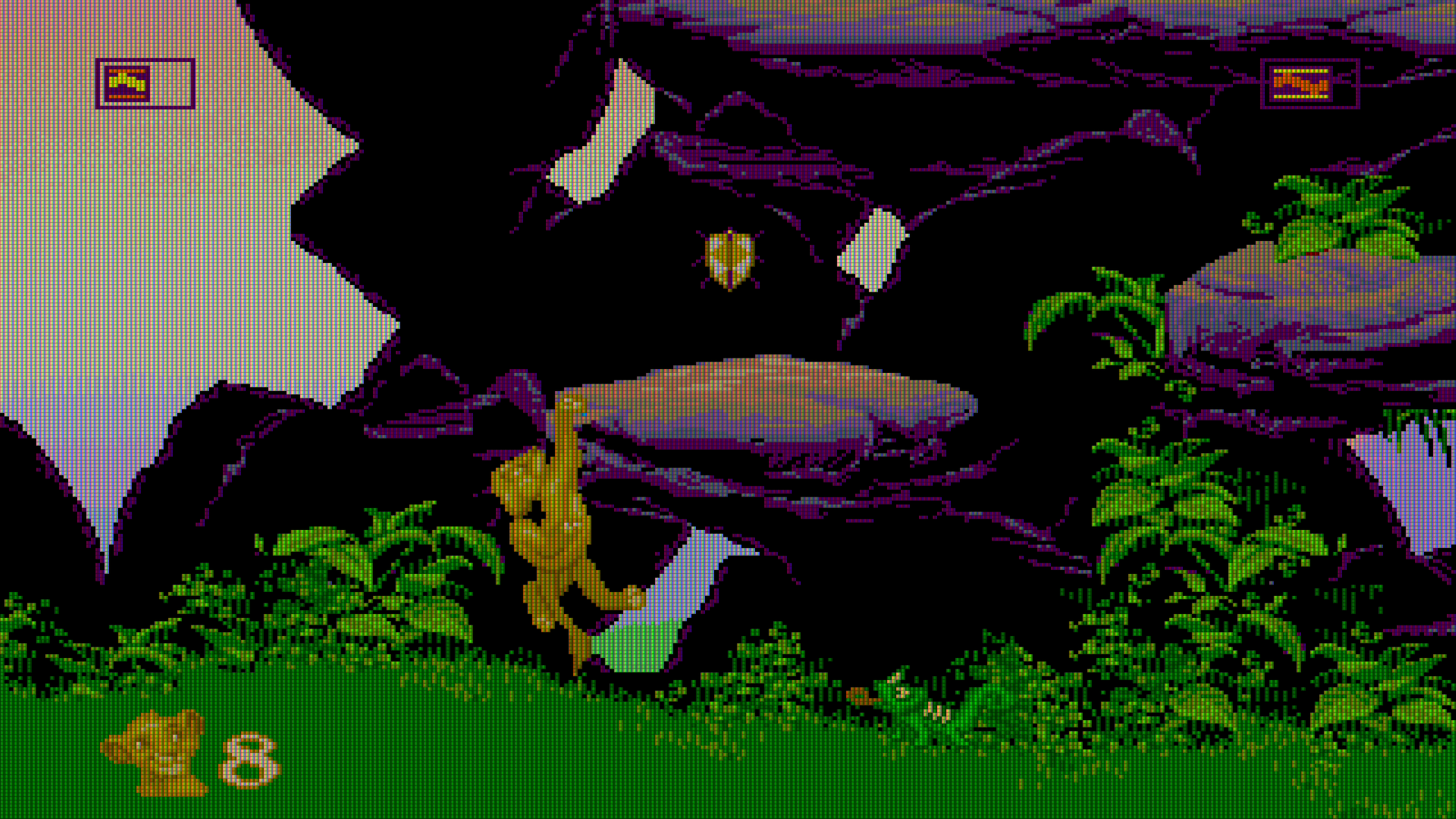 To make up for this glaring omission, Digital Eclipse collaborated with developers of the 90's Genesis version of Aladdin to create what they call 'The Final Cut', not to be confused with another Robin Williams property. This slightly expanded version is a proof of concept of what could've been done with a bit more development time and polish. It's still the same core Aladdin game but with new graphical flourishes and tweaks to both levels and enemies alike. If there's any one reason to pick up the Disney Classic Games collection, it's for this modestly improved release.

Disney Classic Games: Aladdin and The Lion King's collection operates on Digital Eclipse's own proprietary emulation software, the Eclipse Engine. What surrounds the titles in this modest collection of classics is a fairly standard menu wrapper, complete with game selection, access to cheat menus without needing to know the necessary codes (albeit they do disable trophies), and the usual assortment of concept art and stills in the art gallery. 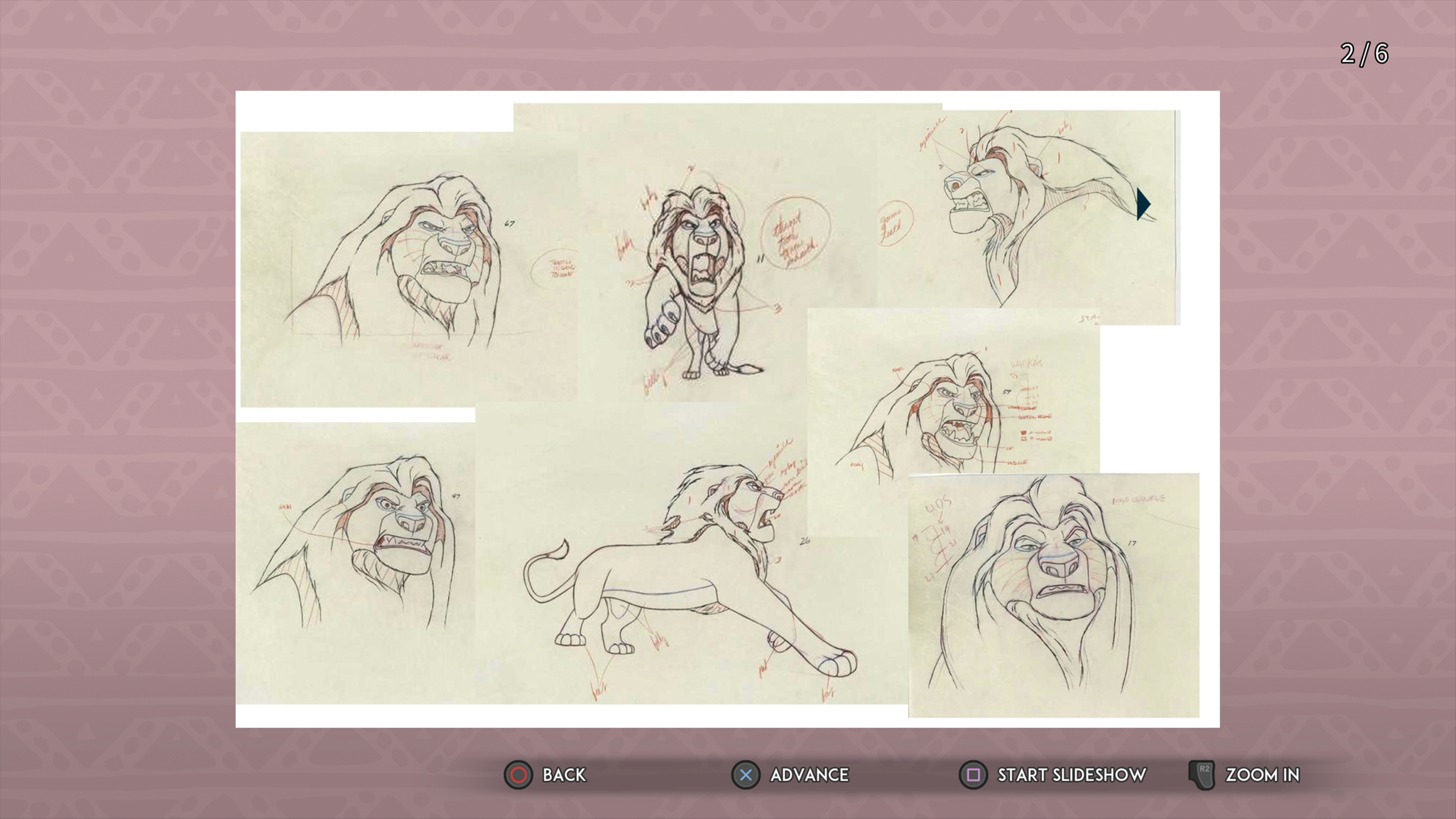 The tool that Digital Eclipse has been adding into their emulation collections that I still find amazing to this day is in how their playable demo reel operators. Select titles in the collection (all but the colorized GB version of Aladdin but only the GB and 'Console N' versions of The Lion King) feature a playthrough of each game where players can stop the video at any point in time and jump instantly into  that game. If you've ever gotten stuck on the monkey puzzles in Can't Wait to Be King, now's your chance to finally soar through that tricky segment and make it to level 3. Given how you're watching a movie and taking control from that point, there isn't any way to let the computer demo take over once again if you get stuff.

However, there's always a handy rewind feature that's fully accessible in any game in the Disney Classic Games collection. No matter if you've just fallen into a spike trap or need to rewind back to fix a great number of mistakes, having an easily accessible rewind button (on the L1 button on PlayStation 4, for example) can make the higher difficulty of these platformers more bearable by today's sensibilities. It isn't infinite, of course, as the rewind feature only goes back a few minutes but that should be more than enough to realize the error of your ways, although it can't rewind your life back far enough to recapture that joy of playing these titles for the first time growing up. 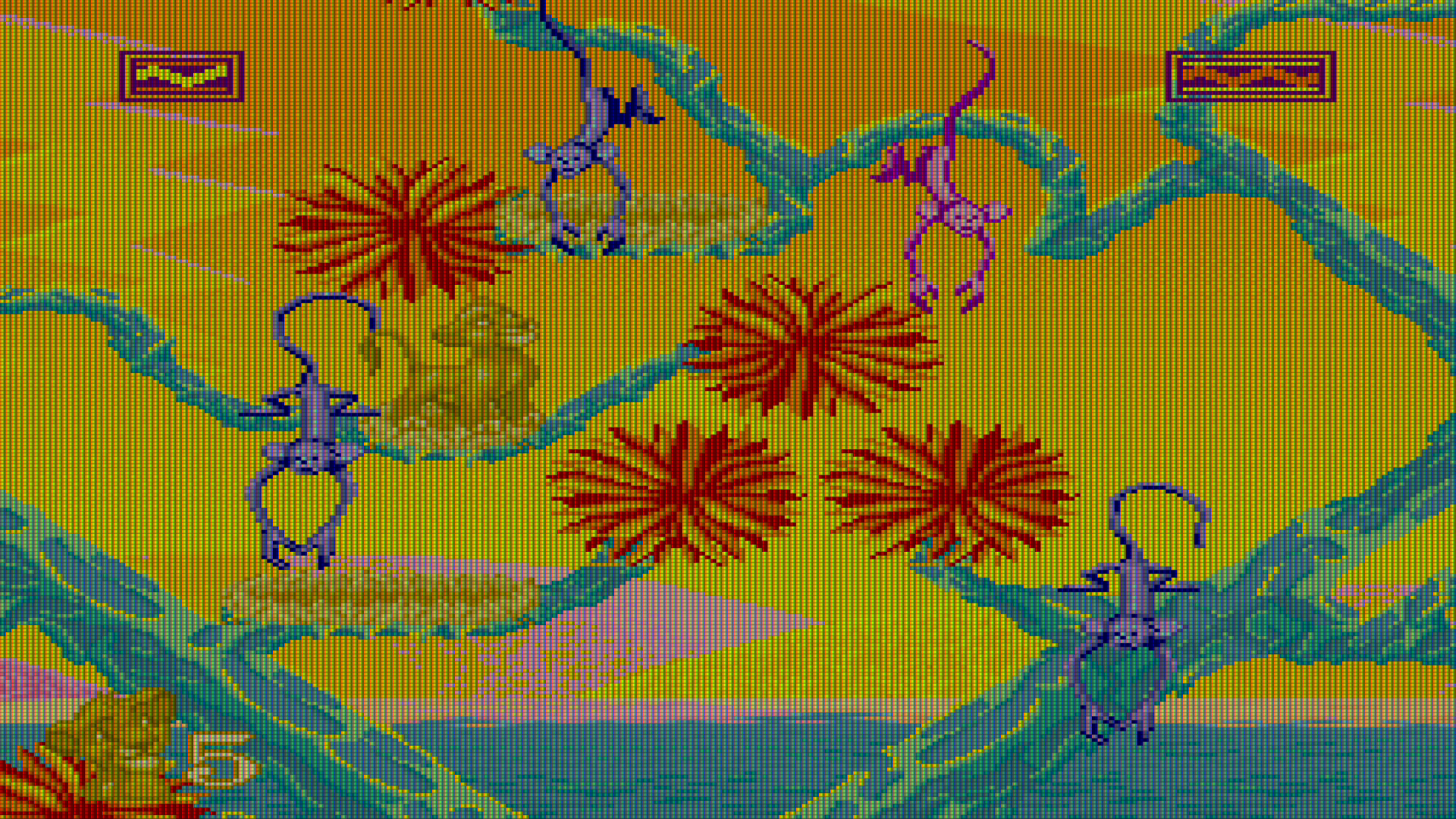 Among the limited display options for the Disney Classic Games are the options to play with a letterboxed 4:3 display (with a single static border or black void) dubbed 'Sharp Screen', expanded and zoomed-in 'Full Screen', or 'Stretch Screen' that widens the pixels horizontally to fill the full 16:9 display. Accompanying this are three levels of filters: Monitor and LCD filters that emulate the old RGB dots on your vintage tube TV and a simple TV filter that exchanges sharpness for a very obnoxious vibrating effect that's meant to replicate older television displays. If anything, the TV filter gave me nearly instant headaches from how much the screen shook back and forth. Ideally, the best setup to play The Lion King is with the Full Screen (not stretched) display and either the Monitor filter, as I found the LCD filter changes the saturation just enough to look unnatural, or none at all. Not having multiple borders to choose from is another small let down against the retro collection. 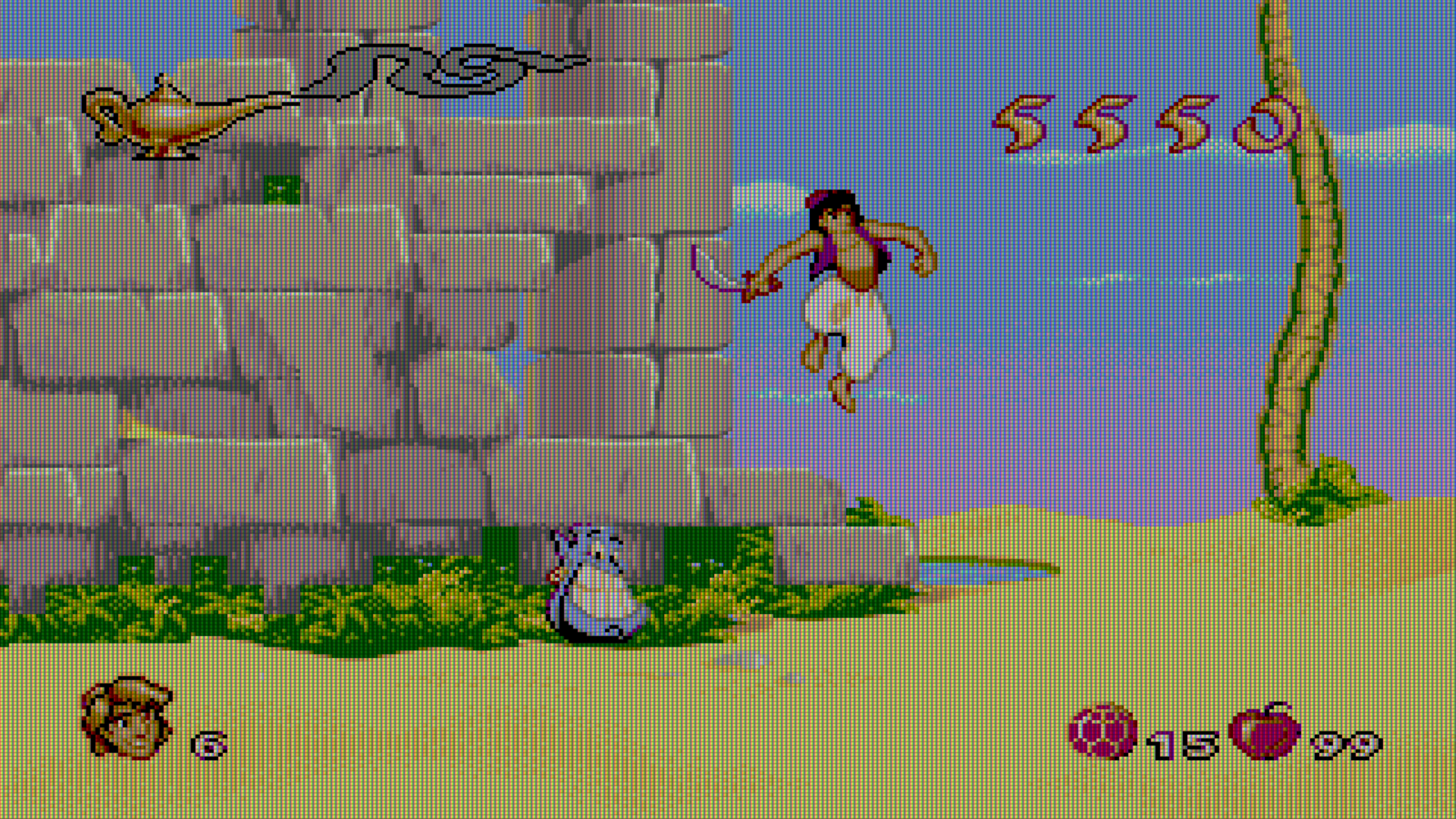 For most players, just being able to play Aladdin or The Lion King once would be enough to feel satisfied. Having a collection of nearly every version out there (sans Capcom's rendition of Aladdin) may be a bit overkill, but that's what makes this such a complete collection. The Disney Classic Games collection is a fine assortment of platformers, although I feel the window of opportunity was always one step ahead and passed this retro collection by.

Digital Eclipse revitalizes two classic platformers with quality emulation on current generation consoles, although there's some that keeps this from being a pixel-perfect collection