Train Valley Review – All Aboard!

Incredibly addictive and absolutely lovely to look at with nothing short of thousands of innocent lives lost in horrific train crashes. Welcome to Train Valley, the endearing railway management game by three friends: Alexey Davydov, Sergey Dvoynikov and Timofey Shargorodskiy. Made as a result of their passion of the railroad, as well as the essential need it had to where they were all raised, the Ural region of Russia, their love of the subject matter and the medium shines through. 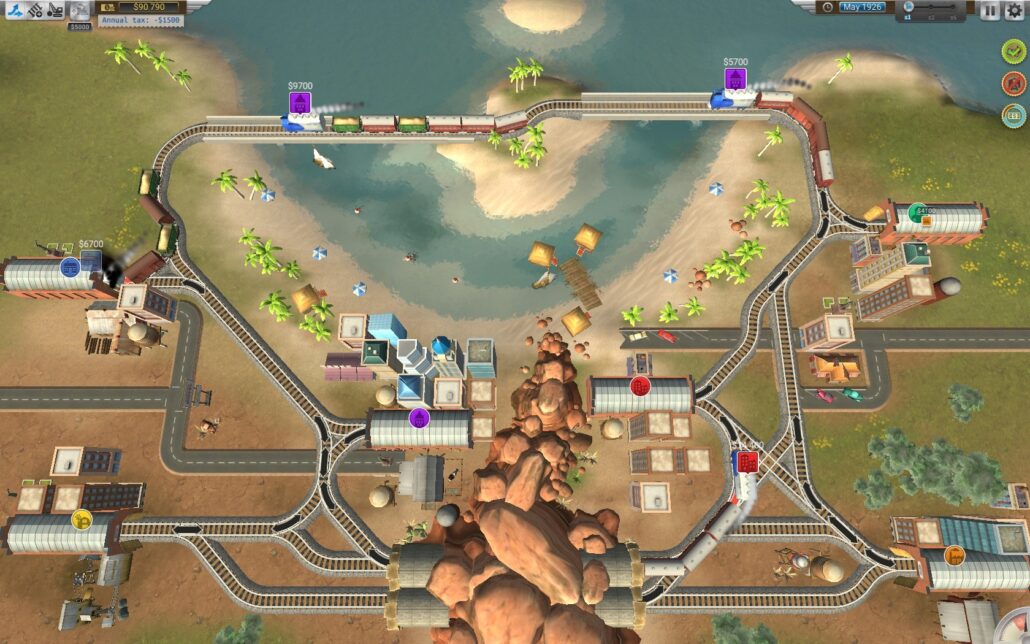 My attempts at running a railroad empire have been mixed as of so far. I was quite successful in linking up the countries of Europe, France would have been an absolute joy to be a passenger as I routed nearly every train possible past the château, completely ignoring the fact that there were shorter routes that the train could have taken and improved the profitability of it for me. That's the story I will tell everybody when they ask why I didn't do as good as I could have done.

In reality, and this becomes the big issue as the complexity increases in later levels, I ended up sending more trains the wrong direction due to using a tracks switch once too many, or changing it by accident while I was attempting to switch one on an adjacent track. Everything can seem to be going so well, I've been doing everything right and a number of years have passed, the map is nearly over and then there's a crash. The spiral begins, casualties weighing on my mind and then comes bankruptcy. Thankfully they are kind enough to let me try again. 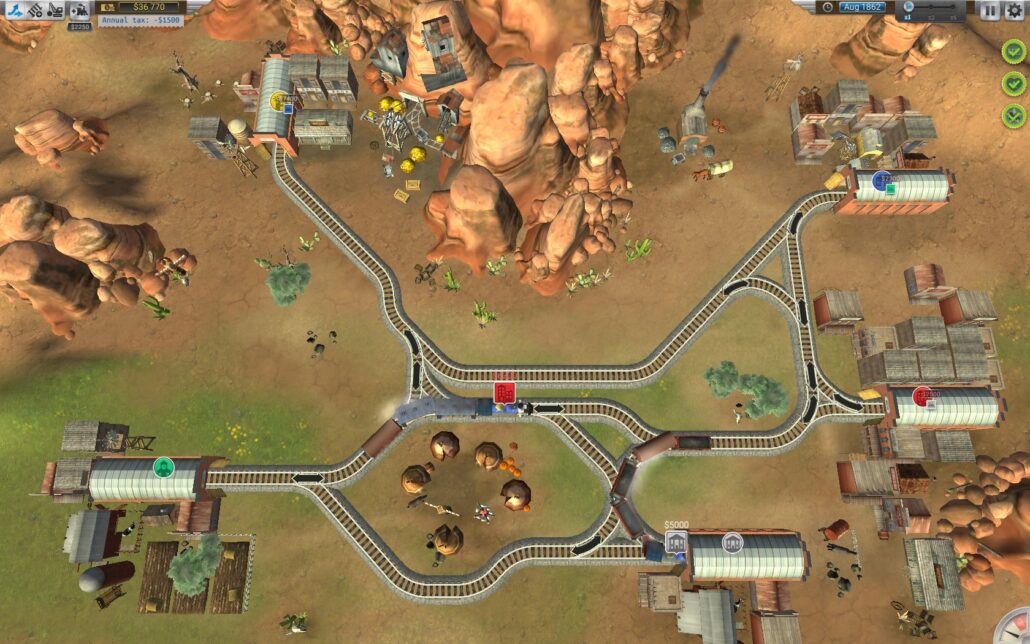 If the introduction doesn't give it away, Train Valley is very good. Placing you in charge of constructing the railway network across twenty-four lovingly crafted maps set across Europe, America, Russia and Japan and throughout different time periods, some referring to major moments in history such as the first ever rocket launch or the building of the Overseas Railroad bridge in Florida. Each of these maps takes place over a number of years and the development is all done as you play, extra cities pop up, extra routes via bridges or tunnels.

As simple as Train Valley first seems, and the first few levels are, as you progress through it becomes terribly complicated. When the increasing numbers of destinations pop up on later maps it means that the larger number of routes makes everything becomes so incredibly compressed, especially so when the need for alternate routes to avoid crashes are included. Only adding these routes to your system adds a switch, this switch which directs the route of train isn't automatic - oh no, that would be much too easy - it's all manual.

Juggling this need of planning and building extra routes to avoid mass destruction actively opposes the other key objective, that being to avoid going bankrupt. Every piece of track you lay costs a flat $1000, unless you decide to displace a few ethnic minorities, in which case you've got to pay an extra $5000 to $20000 for that privilege. Wait too long to get your trains to their respective destinations and their value will depreciate too much, don't make enough money and the end of year tax will hit, then comes bankruptcy. 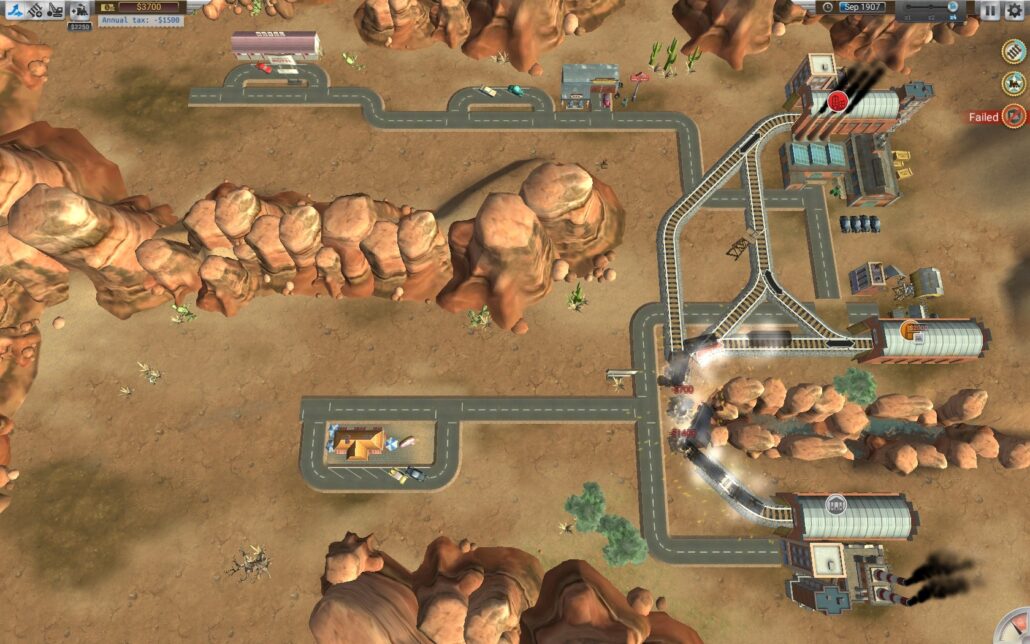 The inevitable crashes are what really puts a dent in your bank balance. You would think that an absolutely charming looking game would be a simple case of sitting down and enjoying the clicking while you watch the trains roll on by. As previously mentioned, each and every switch on your network of rails is controlled manually. This means that the convoy of trains mere seconds behind each other, each wanting to turn onto a different track, need you to do the switch at the right moment or they could end up at the wrong station or off rails completely.

Now the game isn't cruel enough to make you do it all in real time, if it did then even I would be decrying what would be an almost impossible task. There is an option to pause the game, or speed up should you want to watch destruction on a mass scale, at any time you like which makes the more difficult moments much easier. In addition, you have the ability to stop a train at any time and park it on the rails and doing this at the right moment leaves an incredibly satisfying feeling when a second train flies by with mere inches to spare.

There are only two possible negatives I can think of with Train Valley. The first is that certain maps have trains that are released from certain stations, regardless of what is happening on your tracks, taking what has been complete control away from you. These are best described as story specific events, which link into the historical setting of certain maps. The other is that some maps seem random in positioning of cities, even if it's only by a square or two, which means that you could have prepared your track for a city to pop up, only for it to be a little out. These, however, seem petty to complain about when both are specific design choices. 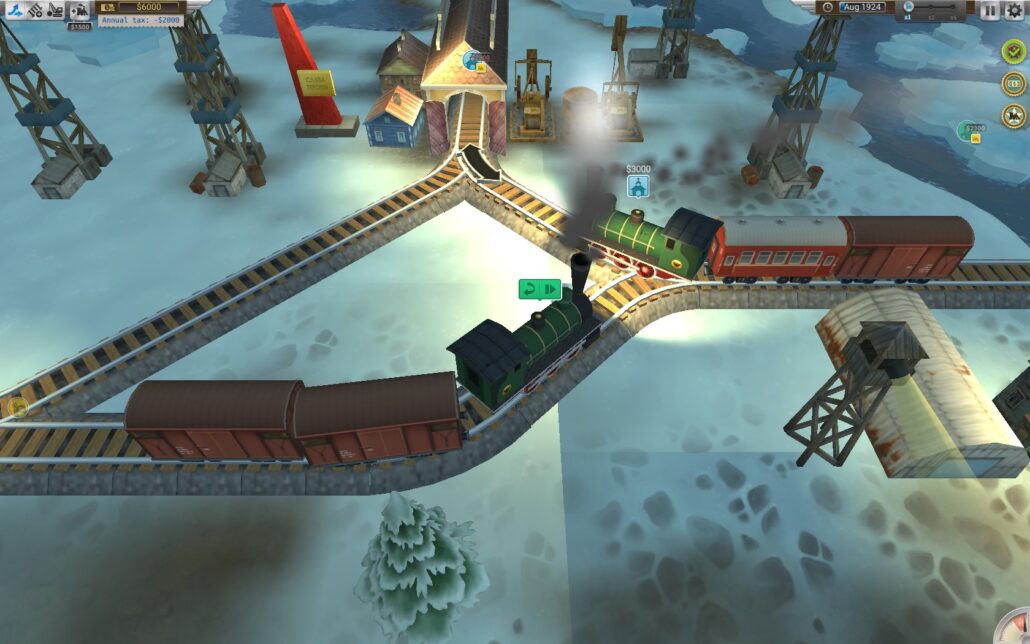 It makes me quite sad when I read the reviews on the Steam page for Train Valley that decry it as being a facebook game, mostly due to its appearance and the fact that there are only a handful of things to do in each level. What is more disappointing is that a post, made just prior to the facebook one, can actually be complaining about the sheer amount of micromanagement involved in later stages, switching tracks, starting and stopping trains and then keeping an eye on the trains that are released at a certain time in certain maps as historic events.

These complaints are diametrically opposed to each other but show that games like Train Valley are ignored due to appearance by some. It's the aesthetic, and that it's a train management game of sorts, that first lured me into buying Train Valley and for £7,  $10 or €10 it is more than worth it. There are hours upon hours of enjoyment to be had in what is a simple but incredibly challenging game combining pleasing aesthetics, excellent game design and a good balance of challenge in an excellent little package.

Train Valley has surprised in so many ways. An interesting, challenging and detailed game in a lovingly small and pleasing package. Offering hours of track building and train crashing in what seems like it should be a basic package. Pure proof that pumping a product full of extra features, that prove extraneous at best, isn't the way to go.