I've always been a fan of simulation, management and strategy games. They're all somewhat similar to each other in some way and they give me that joy of controlling something and always thinking towards the future. They let me do some long-term thinking, building for the future and holding off competition, be that in business or military, as well as the usual resource management. Transport Fever 2 allows for some aspects of this but is lacking in one major area.

That area is the complete and utter lack of competition, which quite literally defangs the whole game. There's no competition to be found in Transport Fever 2 at all. You don't have any AI-controlled companies, no opposition human players and no real threat to your own company other than your own incompetence. Frankly, even that isn't a great deal of a threat since you can simply settle in and wait for the little things to generate enough money to pay for more, no risks needed because there's nothing trying to beat you to the punch.

So what is Transport Fever 2, if it's lacking one of the fundamental aspects of these titles? It's more akin to Cities: Skylines, only you don't have to concern yourself with building up the cities themselves. Your task is a simple one, you need to give the villages, towns and cities what they need to fuel their growth. By road, rail, sea and air, you'll be connecting these population centres to each other as well as to resource points across the world, creating supply chains from one place to the next.

It's both the flexibility and detail of this that impresses me the most. When it comes to detail, developer Urban Games has gone into an impressive amount both on the way the game plays and how it looks. Sticking with the supply chains - it's not as simple as simply popping a train station within the city, setting the route and just having the resources travel into the city and be disseminated as if by magic. You'll need to build a truck stop that enables your carts/trams/trucks to load up these resources brought in by rail and move them to another one, two or even more truck stops spread across the city.

In addition to this, to avoid the needless building of lines upon lines, crisscrossing the world, you can offload some resources from one line at that same city for a cargo train to possibly pick them up and move them off to another destination. Combine this ability to spread around, move and locally store resources with the multitude of options available, including aircraft and seaborne vessels, you can find yourself creating a well-oiled machine that starts with the simple supply of silver, which gets turned into silver spoons, which is then taken to a local city and then if the supply is large enough, spread across the world.

Each step gains you money, letting you expand to more resources of even further, such as the transport of pedestrians either in an inner-city, a local or on a national scale. It's when you start building these routes you start to see cities really grow and as they grow, more resources are needed as well as bigger and better infrastructure links. It's very easy to see your early bus or tram lines get stretched to the limit like even a good day on the tube. The only problem with this expansion is that it comes into conflict with other issues that people like to bring to you.

I've mentioned expansion. One thing I really like about Transport Fever 2 is the modular system it brings for every building. You can expand the function of almost everything, for example adding extra lines, passenger platforms or even cargo platforms to your train station. Maybe you want to expand your harbour, giving it large docks for both passengers and cargo, expanding its functionality. Each and every building is modular in nature, letting you grow them to the needs of their location without having to scrap everything and start anew.

What really helps is that the UI is crisp and clean, designed to make everything from setting up your routes to building and expanding these buildings as easy as possible. Routes are colour coordinated, with the ability to rename them at will with setting them up and adapting them as simple as the touch of a button. Modular buildings have simple points, letting you clip on the extra piece with no fuss at all. The only issue I have, not with the interface but the actual building, is that you can't finely rotate buildings. Since you have to rotate in specific increments, once a road is built you're rarely able to fit any building snug to the side of it.

On the issues that the people bring to you. Climate change is something (sensible) people are becoming more aware of. Pollution in both carbon emissions, as well as noise pollution, become an issue. If you keep pumping both out and not investing in newer, cleaner and quieter methods of transport, people start to turn away from your services. I will admit that while it makes a slight impact, I haven't noticed it be as damaging as the game likes to believe it will be. Another issue is that you can't actually use real-world methods to combat it, such as noise barriers and planting trees.

This isn't to say you can't plant trees. You can. The problem is that they seem to be cosmetic only. There are some cosmetic areas that have really had a lot of detail put into them though, such as busses actually showing their next destination or the bustle and growth of cities, the development of buildings as time progresses - provided you're giving the location what it needs to develop. It's organic and very much based on your input, so if you provide commercial goods, there's going to be a large boost to the commercial buildings and development. The same for industry, should you go that route.

If I have one problem it's that you can't actually direct growth in a particular direction. All too often I'll find roads and buildings popping up at the side of my train station, making it more expensive to expand and also annoying those that happen to be near it, thanks to the noise pollution. It would be nice if the game allowed you to at least zone some areas or potentially buy areas of land outright. Still, it's a small complaint when the game essentially gives you free rein to build on any bit of land you like - there's no bureaucratic red tape here.

Transport Fever 2 is a genuinely easy and enjoyable, almost addictive game to play. You actually see your input making a difference and the areas growing around the infrastructure you've built. Sometimes it's a little too easy, with the margins for almost everything being multiple in the thousands over what you'd find in real life and while the campaign will take you across all the world and across multiple ages in its eighteen parts, the amount of money it starts you with is absurd.

As a matter of fact, this applies to every aspect of the game. There is no challenge and that boils down to my earlier question of what exactly is Transport Fever 2? The best way I could describe it is a simulation and also a celebration of infrastructure. When looked at this way, it really is as good of a game as you could hope to play. All I can say is that if you're looking for a challenge, look elsewhere. 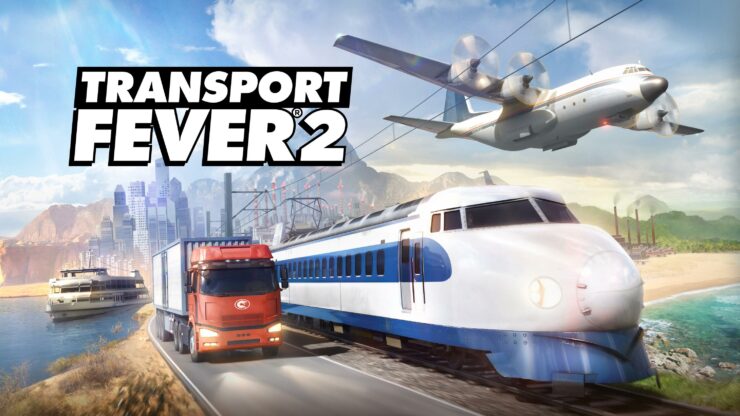 Transport Fever 2 is a toothless but still ultimately enjoyable simulation of all things infrastructure. As you set up resource lines, passenger routes and more, you'll see the world develop and grow around your inputs and influence which is enjoyable and even an addictive thing. Simple and easy to get into, the core problem is that it takes simple a little too literally, with the game offering no real challenge throughout any game mode. Still, if you enjoy this sort of game, you could do a lot worse than Transport Fever 2.