The 25th Ward: The Silver Case

The latest avant-garde adventure to come from Suda51’s twisted psyche has finally arrived on a modern set of consoles, first being released as a series of episodic games for mobile in a time before touch screens became prevalent. Billed as a follow-up to last year’s release of The Silver Case, The 25th Ward: The Silver Case picks up the pieces of the aftermath left behind by one psychotic individual by the name of Kamui Uehara. Does NIS America’s sequel to one of the strangest visual novels to make it stateside still impress as it once did?

Tokyo’s Heinous Crimes unit has been called back to duty following a bizarre rash of murders that live up to the police department’s namesake. Even as Kamui Uehara, the antagonist of The Silver Case, has left this mortal coil, lingering effects still continue to haunt the 25 fictional wards of Tokyo. True to its namesake, The 25th Ward: The Silver Case revolves around bizarre murders within that 25th city ward and major players on all sides of a virtual standoff.

The Silver Case’s original story featured two wildly varying stories that involved a pair of characters who couldn’t have been more different from one another. Each explores the effects of a psychopathic killer named Kamui Uehara. Each story utilized the Film Window engine that SUDA51 designed specifically for The Silver Case in unique ways to propel the narrative through a presentation of still screens and low-poly 3D cutscenes in far more interesting ways than visual novels had previously tried to explore. The 25th Ward picks up after the dust has begun to settle upon Tokyo and offers a trio of gameplay scenarios, each developed by different scenario writers: Correctness, written by Goichi Suda himself, Placebo by returning veteran Masahi Ooka, and a third scenario, Match Maker written by Masahiro Yuki, someone that’s worked on other projects with SUDA51 following the original release of The 25th Ward including Lollipop Chainsaw.

The 25th Ward: The Silver Case’s core gameplay may have been streamlined since last year’s title release but there’s still something about the presentation that feels like it sucks away at the soul. Originally developed for mobile phones that still offered a numbered keypad, the options available to the player are all based upon sides of a four-sided die, each representing simple tasks such as Move, Look, and (Use) Item. All text is still accompanied by an obnoxious typewriter sound with every letter hit and ceases to quiet down when trying to skip through dialogue. This is a shame because The 25th Ward has some catchy background tracks that don’t deserve to be played in mute just because of the consistent clacking of a fake typewriter sound.

Some of the chapters stand out as genuinely interesting in The 25th Ward, including a kumite against various assassins that seem prone to pop out of the shadows any time Shiroyabu visits an ATM. This whole chapter arc revolves around fighting against eight assassins of various caliber in RPG-esque combat that aims to be presented like that of EarthBound. It’s still a text-based adventure even during these experimental parts, but these segments stand out as some of the more innovative uses of the Film Window system.

When the story isn’t being propelled with SUDA51’s eccentric narrative, there are lulls in the storytelling that feel like they’re dragging their feet as much as possible. Numerous gameplay moments feel explicitly designed to waste the player’s time as much as possible with intentionally cryptic puzzles. In one of the later puzzles in Shiroyabu’s arc, I was left at the entrance of an 80-floor luxury apartment complex within The 25th Ward and told that I needed to track down a particular person but was given no direction otherwise. Only by randomly going door to door could I ascertain hints about who I was looking for, only to be told that maybe there were another dozen or so strange characters to look for as well. Their hints all made sense (look on the single digit floors with only even numbers, seek out the apartments on the corners, etc) but I was still left without crucial parts of the puzzle. If I had given up and just knocked on every door along the way, I could’ve brute forced my way through the puzzle but that’s over 2,000 apartments to stop and knock.

Brute forcing is sadly the most effective way to play through The 25th Ward: The Silver Case. Even sections that should be as obvious as talking to your partner before carrying on the story instead relies upon Looking at every object in the room, Talking to the few people around you, Looking a second time, and continuing until all options are exhausted and the story continues. It might be funny to hear Kuroyanagi call the character by ‘Jabroni’ and to get his head out of his ass the first couple of times, but her brash charm wears thin when you’re bashing your head against every possible option just to find the right solution to continue the story for a few minutes longer. All three scenarios suffer from similar pacing issues, although the Placebo and Match Maker campaigns offer much heftier info dumps, so the amount of time you’re going to spend fumbling through contextual menus is thankfully significantly reduced.

This time around, The 25th Ward: The Silver Case’s story is even less coherent and comprehensible than the namesake this sequel is based upon. My similar complaints from The Silver Case about characters never truly holding a conversation still holds true in this updated sequel. Characters act as if they’re talking past one another and never really interacting and responding to one another, which has led me to believe that’s simply a part of the original Japanese dialogue.

The Silver Case featured a pair of new chapters when SUDA51’s adventure was ported onto the PlayStation 4, one of which was titled ‘White Out’ and was lead to be a segue into The 25th Ward. However, that chapter felt too short for the amount of hype it received leading up to release. This time around, The 25th Ward features the same chapter, fully expanded to (vaguely) explain what the hell is going on. Side by side, the newest chapters of The 25th Ward match up with those of The Silver Case, although to be mildly annoying, the translations aren’t identical; the same thoughts are conveyed, but it’s obvious that the translator this time around isn’t referencing the same notes from the first White Out case.

The 25th Ward: The Silver Case is among one of the strangest visual novels I’ve played, even looking up to its predecessor by comparison. Without playing The Silver Case or being exposed to SUDA51’s auteurship before this one, chances are you’ll have no bloody idea about Kamui, silver eyes, or any of the other main plot points that are discussed at great length within the Heinous Crimes Unit. The 25th Ward’s an interesting little addendum to the mythos, but I couldn’t possibly recommend it to anyone that hadn’t played the first game. The presentation and gameplay might have been greatly refined since that of the mobile release, but the scenario itself doesn’t quite have the same impact as The Silver Case. 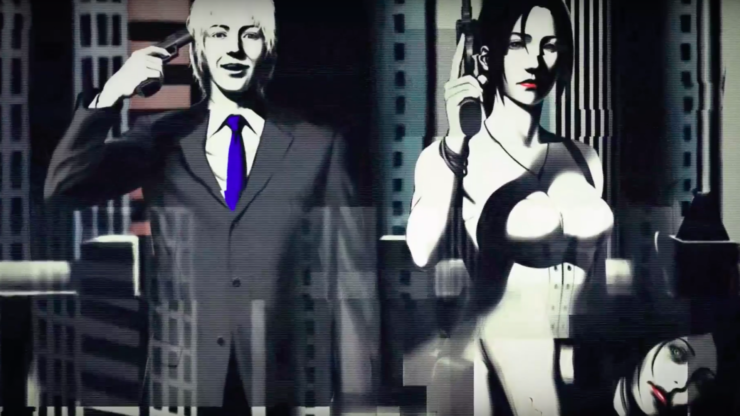 The 25th Ward: The Silver Case offers another bit of insight into SUDA51's insane creativity, this time completely rebuilding a mobile phone title into the same framework as that of The Silver Case. While it doesn't quite have the same revelations of The Silver Case, there's still some rough charm left in the aftermath of Kamui Uehara.