For over twenty years, children and adults alike have been dreaming about this game. Since the black and white sprites of fantastic creatures, they’ve wondered what it would be like to do more than battle them as they erupt from the long grass. Other Pokémon games have managed to quell the desire by letting us take photos or see them roaming, but none have managed to sate it. Until now.

Pokémon Legends Arceus is an open world game where players explore the landscape and complete the first-ever Pokédex. Having arrived in the region of Hisui at a different time through a magical Space-Time Rift, you explore the uncharted land and encounter the untamed Pokémon. For anyone that has played nearly any installment of the franchise before, the idea of wild Pokémon feels very familiar. But Arceus offers us an extra level of savagery in the magic animals. These bygone Pokémon, from the Psyducks to the Gyarados, can attack you as well as the Pokémon you’ve managed to capture.

This radically changes how you interact with this game. You have to sneak through long grass to approach a target without giving yourself away or find an alternate route to take the high ground or surprise them in some other way. It makes the world feel wilder and is easily one of the best ideas Game Freak has had in years. It makes your relationship with the game and the world feel so much more connected than most previous series. You get a sense of being there, interacting with everything, rather than being this floating God, only revealing their presence through their minions.

The next great idea is to remove the necessity for combat without actually removing combat. Obviously, sometimes Pokémon will fight, that is after all their purpose, but as a member of the Survey Corps, your primary job is to study them. This means you’ll have to capture them, but doing so can be done with a handful of Poké Balls and a half-decent throwing arm. Arceus lets us capture them without combat and without the awkward throwing game seen in Pokémon Go and Let’s Go. Instead, here you take aim much like in any other shooter and loose your Poké Ball at the hopefully unsuspecting Pokémon. You can also capture them through combat, but this is only for the aggressive monsters you couldn’t sneak up on.

Completing the Pokédex means more than simply capturing Pokémon. You have to understand them and check off a certain number of tasks from a list with each one. The options vary slightly, but they boil down to capturing a certain number, defeating a certain number, evolving a certain number, and exploiting any weakness they might have. While several are obviously combat-based, these options give the gameplay a range never had before in a Pokémon game. The non-combative players can still complete the game by capturing (and releasing) a small army of each type instead. More traditional players can grind against a family of Pokémon with their weakness, or they can even explore the side-quests that often revolve around specific Pokémon. It’s fantastic that different playstyles can be rewarded in this way, and it feels so much more open in terms of exploration and progression than other Pokémon titles.

Arceus has obviously taken inspiration from The Legend of Zelda: Breath of the Wild, which has seen many pretenders attempt to recreate. But Game Freak has stayed true to its Pokemon and its roots, creating something that blends some of the best feelings of the Zelda game with some of the best Pokémon from their menagerie. While it misses the mark on a few things, and we’ll get to that shortly, it absolutely nails the feelings. Once you get away from the first area and the tutorial people, you feel very much free in the world and capable of exploring it however you want.

This world, however, is missing a few key things. While it doesn’t look bad per se (although if you think things only look good when they’re as photorealistic as possible, Arceus is not for you), it does feel and look quite empty. The Legend of Zelda: Breath of the Wild was the driving force behind the feel and look of the world here, but Link had tantalizingly vast vistas to gaze at and countless landmarks to explore. One of the best things about Breath of the Wild was that you could reach more or less any of the landmarks and anything else of interest that you could see. Spot a mountain cut in half on the horizon. Go there and see what’s happening! Arceus just doesn’t have the landmarks meant to entice you or the dungeons to be found dotted all around either. You’ll want to explore every nook and cranny in Arceus to find the Pokémon lurking, or hiding, off the beaten track, but overall the world just feels sparse and barren. Forests don’t feel as dense, fields feel half completed, and mountains appear little more than ramps. It’s a surprising misstep and one that does hamper your desire to explore for the sake of it. But the wild Pokémon, while not quite making up for it, do give you more than enough reason to explore anyway.

Likewise, traversal in Arceus is a little tricky as well. Until you meet a few specific Pokémon, things like steep rises heavily restrict your movement and, therefore, where you can reasonably explore. It almost makes several areas feel like corridors rather than the expanse wilderness you want to explore. Again, this is corrected about halfway through the game, but coupled with the sparse world design, some newly explorable areas feel like you’re exploring out of the bounds of the game.

These points would be seriously detrimental to the experience of Arceus, but the game is so much more fun than these issues are frustrating. Arceus has captured such a fresh perspective of the Pokémon world fans have been craving ever since the franchise arrived on our Game Boys, that you don’t really feel them dragging down the experience.

The story takes itself very seriously and has some fairly serious themes. The crux of the conflict is an impassive deity and a schism in the church that venerates them. But this is all played out from cliche dialogue, teenagers, and the aforementioned magical animals. The story often tries to press itself onto your actions, but you’ll mostly forget about it when you’re dodging out of the way of the Psyducks homing blast or throwing two hundred Poké Balls at that Pikachu before it has a chance to flee.

This is a game that many of us have dreamed of despite its flaws. And despite the fact that Pokémon noises are still absolutely terrible. 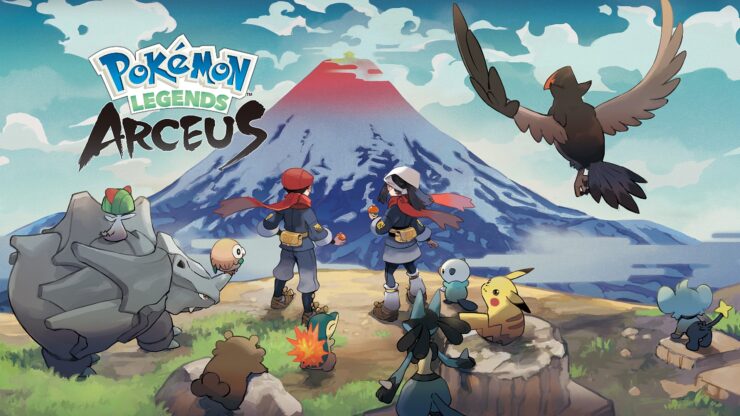 Arceus offers you a chance to play your childhood dream. It's not perfect but it offers something more engrossing and satisfying than anything else Pokémon has come up with. Pokémon Unlimited Mod for Pokémon Legends: Arceus Features All Regions and All Pokémon Including Forms, Regional, and More

Temtem Review – 150 Hours Later, An Experience in Fulfillment and Pain