We’ve all got a friend that’s into birdwatching or some other strange form of natural voyeurism. They’ll have a little pocket-sized notebook filled with pictures and info on whatever chosen thing they’ve decided to obsess over and will pause every ten or so meters to take a picture of something you can never see. It's not the most exciting hobby in the world, but after playing the New Pokémon Snap, it's not hard to see the wonder in it.

Pokémon Snap is a non-violent on-the-rails shooter. Well, not really. You play as a young photographer who is hired to explore the wilds and document the Pokémon found within. There’s no violence, captivity, or animal cruelty so commonly expected in the Pokémon franchise, which makes the game feel even more special. You’re not battling them or collecting them or even disturbing them, besides the occasional apple. Take nothing but photos and leave nothing but piles of apples. New Pokémon Snap lets you see Pokémon in a way that hasn’t been done since the first Snap game released on the Nintendo 64 in 1999, and it is a calming and morish experience.

It’s a delightful return to form, although not without a few innovative changes that don’t always hit the mark. Fortunately, the game is still very much on the rails, as you’ll venture through the wilds on your NEO-ONE, a Jurassic Park-esque vehicle that drives you safely past some of the most dangerous animals ever. It travels at a steady pace down its same route, and you have no control over where it goes or fast it gets there. Instead, you’ll be memorizing each route exactly, paying darting wildlife around you, and learning exactly when to get your photos.

But in this edition of the Pokémon Paparazzi, levels change as you play them. You’ll unlock a nighttime version of each run soon enough, but the Pokémon in both runs change their behaviors as you advance your research level. These changes are impressively varied, with distant Pokémon getting closer, shy Pokémon becoming braver, and altogether new Pokémon making their appearance. On the one hand, it can be a bit irritating when everything changes, especially if you miss the chance to get shots you were trying to accomplish. On the whole, though, this stops the routes from ever getting boring. Once you think you’ve got everything you can get out of one level, it changes and offers new surprises.

And this helps tell the emergent stories in the levels too. You’ll often see fragments of Pokémon lives playing out as you gently float by and, piece by piece, you learn more and more about them and their interaction with their friends, rivals, and competition. After a while, you’ll almost get a feel for the fictional ecology you’re exploring. These changes, both little and big, are fascinating to experience the first time.

But there is a human story also being told in New Pokémon Snap, which is often unnecessary and frustrating. There is so much talking between most of your runs, especially at the beginning of the game. Learning about the glowing Pokémon and tutorialising every new feature and mechanics slows down your ability to just go out and take photos. A human plotline was definitely not what this series was missing.

The first item you get after completing the first route a few times, the scan, has a few uses but most of them aren’t clear. It's great at highlighting points of interest and allows you to pay attention to areas and things you might have otherwise ignored, which can often help you find hidden Pokémon and great photos. The same can’t be said for its effect on Pokémon themselves. You’re told that some Pokémon hesitate or turn around when exposed to the scan, but there is no telling which species, if any, will be triggered by it. That's also true of the later Illumina orbs that make certain Pokemon glow. You can experiment with them, but the lack of clear responses makes the experience a little more annoying than enjoyable. At least when you hit a Pokémon with an apple, there is a clear response.

The Pokémon are all fantastically designed and beautifully animated as they wander and explore. Each photo you take is genuinely nice to look at and shows just how pretty Nintendo Switch games can be. You're even able to edit photos at the end of the course to make them more personal and interesting.

The courses themselves are varied and give you the chance to meet Pokémon from every series. Thankfully you don’t need to have an encyclopedic knowledge of the species, and the game won’t teach you one either. You can simply enjoy taking photos and maybe nearly their names if you’re really invested. The routes are about the perfect size, too, just long enough to let you memorize the route and landmarks so you can learn and prepare for any blink-and-you’ll-miss-it appearances or actions on your second or third run. The only downside is that it can feel tortuously long and slow if there’s only one specific thing you’re trying to achieve. But this is only an issue for completionists, and most players won’t encounter this at all.

Overall, New Pokémon Snap is a fantastic entry into the Pokémon world that lets you experience and explore the wilder side of this world. While the photography genre has been explored in indie circles with games like Umurangi Generation, there is room enough for big studios to exist in this environment too. 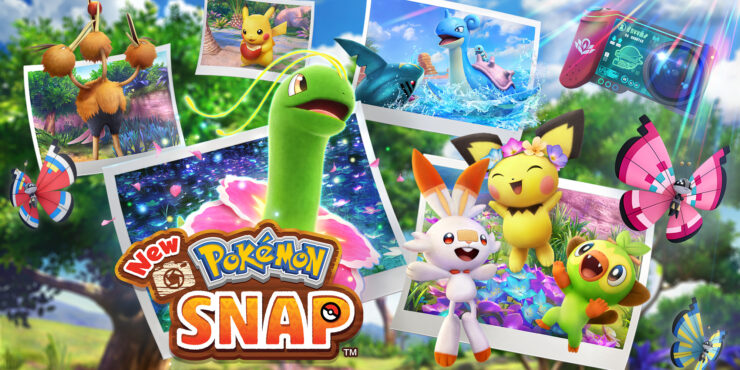 New Pokémon Snap offers a great chance to explore the Pokémon world, with beautiful animations and designs, thrilling levels, and a sense of calm throughout. You'll struggle to not enjoy your time with it.