It’s difficult to explain how awesome Planet Coaster is to someone that hasn’t played it yet. In simple terms, it’s a construction and management sim that lets you create and manage a theme park, but that doesn’t even begin to describe what it really is. Ever wanted to manage your own Disneyland, build your own (and far more accurate) version of Harry Potter World or construct a ride with a scarier angular drop than Saw at Thorpe Park? Planet Coaster can make it happen.

The thing that I love most about Planet Coaster is that it puts everything in the hands of the player. This may sound kind of obvious as that is the point, right? It’s your theme park with your rules. However, Planet Coaster doesn’t force its players to micromanage every single aspect of their park, nor does it hand them a blank canvas and force them to start painting on their own. It’s entirely up to the player how they want to proceed and how much effort they want to put in. For instance, a player could easily place a bunch of pre-built rides and facilities and their park would do well. They would find all the tools and metrics required to run a popular theme park and would have a lot of fun in the process. On the other hand, for those that want to be really creative and design every aspect of their park (even down to the last light fitting) their imagination is pretty much the only limit to the experience that the game can provide.

Offering three modes, Frontier Developments have done their best to provide a varied experience, giving players the chance to learn more about micromanagement before jumping straight into their first park. The career mode provides a decent framework for players to get to grips with managing parks with predetermined themes and locations. This mode draws attention to more complicated aspects of the game that may have otherwise been confusing or overlooked by some players, such as applying for loans or creating work rosters. There are a number of scenarios that encourage players to improve a park, setting objectives that push them to reach higher monthly profits or ensure that their next coaster reaches 70 mph. These objectives are also separated into three tiers: easy, medium and hard, giving players a clear indication of how well they are progressing. The only thing that currently lets this down slightly is the tutorials. With the rest of the game being so polished, it would have been a nice touch to have more interactive tutorials, rather than just a few videos on YouTube.

For those that prefer to work with fewer restrictions (or, like me, are impatient and just want to start playing the game), Sandbox offers all the tools and unlimited finances. After choosing between five locations, players are able to jump right in and begin creating their dream theme park. I found this mode the most enjoyable by far and found that after a while, I became more confident with my creations. As time went on, I found myself straying further away from premade blueprints for rides and facilities, taking more pride in my custom-built coasters and shops. Before I knew it, I was carving out lagoons littered with shipwrecks and dressing my props with special effects to entertain my guests. Planet Coaster’s keyboard controls feel natural remarkably quickly and with the game offering so many different colors and designs for each object, it's so easy to lose all track of time when playing. However, I encountered a few difficulties when trying to place some of the props (the animatronic Kraken, in particular). I found that placing things in water can be quite difficult as objects behave differently when placed on the surface of the water. Rather than being able to submerge the Kraken next to my shipwreck, I had to place it on land and then make a considerable amount of adjustments to its position. This was a small inconvenience but could certainly become a more serious problem for those creating more complicated pieces of scenery.

After a while in the Sandbox mode, players may begin to crave a more challenging experience and lucky for them, Challenge mode also exists. This mode initially puts players at a disadvantage, starting them with a lack of funds and resources. Players will, therefore, have to earn their way to a better park. Although parts of this mode appeared to be quite challenging on the surface, it was certainly achievable in practice. This mode felt difficult enough to be challenging but not so hard that it would leave players feeling stressed, striking a nice balance overall.

Clad in a beautiful cartoon style, Planet Coaster makes theme park management a very attractive pastime and continued to surprise me with its staggering levels of detail. Every single person seen wandering around the parks is an expressive individual, meaning that they will react to everything in the park, from ride queue times to litter on the floor. It was really cool when I switched to the in-car camera on my coasters and saw my guests’ faces of excitement and terror as they raced along the tracks. Staff require training and can become unhappy or (in extreme cases) quit their job if not treated well. It’s also apparent that Frontier have put a lot of effort into recreating the ambient sounds found in real theme parks, which makes the game feel more polished, overall. In fact, they’ve gone one step further and have given players the opportunity to add their own music to their rides. Finally, a theme park that blasts Coheed and Cambria on the spinning teacup ride!

Moreover, this theme park simulation focuses on its community far more than any of its predecessors, demonstrated by Frontier’s decision to include Steam Workshop support. Even if you aren’t particularly interested in playing the game, it's worth checking out some of the amazing things that have already appeared on the workshop. It’s so easy to share creations and so far, it appears to have fostered a very friendly community.

With regards to performance, the game ran flawlessly on my PC (GTX 1080; 16GB RAM; i7 6700K). Planet Coaster also supports the 3440 x 1440 resolution and looked right at home on my ultra-wide monitor. Supporting a refresh rate of up to 144 Hz, the game certainly has the potential to look silky smooth on PCs with really good specs. Although I cannot vouch for the game running well on lower spec PCs, the minimum requirements for the game are GTX 560/AMD Radeon 7850, 8GB RAM and an i5-2300/AMD FX-4300, which sounds pretty reasonable. 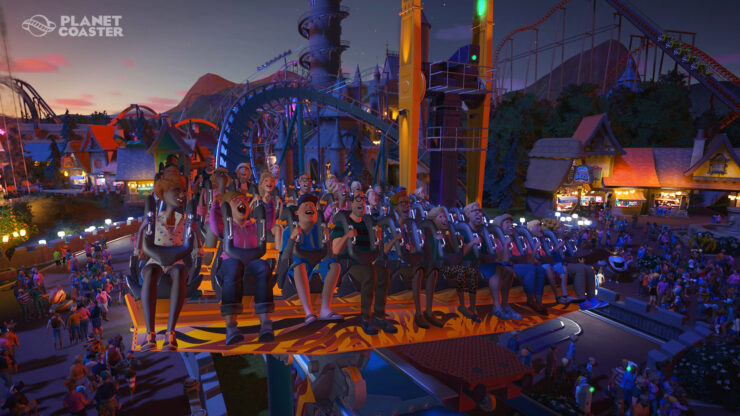 It’s an understatement to say that Frontier Developments have outdone themselves with Planet Coaster. With its beautiful cartoon-style, incredible levels of customization and a small selection of fun modes to choose from, Planet Coaster has set a new standard for the genre. Nonetheless, it's still early days and with the foundations of the game being so solid, it's likely that we’ll see the developer continue expanding the game so that it can reach its full potential. I thoroughly enjoyed playing Planet Coaster and can’t wait to get back to my parks. Despite its long-awaited release, Planet Coaster does not disappoint and is well worth at least a few hours of your time.