Today, we take a look at another fighting game that will be sharing the spotlight with another hyped-up upcoming release. The game in question is Phantom Breaker: Omnia. A game I talked about at length while doing coverage for the news. I’m sure that many players know it for another reason, though, and that is going to be something I’ll be focusing on once we cut to the review.

I’m sure that there are three camps of people reading this article Some don’t even know what it is and think this is a new game; some might know its history as a game that’s been exclusive to Japan for the longest time; and finally, there are the fighting game community guys that know it as the game that refuses to use rollback netcode in 2022.

Tekken 8 Announced at State of Play, Will Launch on PC and Next-Gen

And yes, let’s get that out of the way because, like with Babylon’s Fall, my issues with the game don’t stem from just one problematic aspect that permeates the entire game. The netcode issue IS a problem, and I will discuss it later in the review. But it isn’t going to be everything the potential players of this game will look at. Some players prefer to play against AI opponents and play through the story mode.

On that note, Phantom Breaker Omnia provides a story mode with full voice-acted cutscenes (in both English and Japanese languages). Unfortunately, Rocket Panda Games doesn’t like the idea of us sharing the game’s story, so I can only say that, at the very least, the dubbing is quite good in both English and Japanese versions of the game. With that out of the way, let’s talk about the thing 80% of the people reading this review are looking for.

If I were to describe Phantom Breaker: Omnia with one sentence, it would undoubtedly be Sensory Overload. Why? Because the game indeed loves throwing random stuff at you with almost no way to explain itself. You either get it or you don’t, and you are left to figure out how things work both in and out of combat.

The game introduces three different combat styles that characters have access to Heavy, Quick, and Omnia. That’s right, it’s not just a matter of selecting a character, but you also have to decide on their combat style. Heavy style focuses on single powerful strikes with a tank-like Overdrive that lets you have hyper armor, and Quick style focuses on quick and easy to perform combos with slightly less health.

Omnia style is the outlier of the bunch. It increases the overall stats of the character while essentially getting rid of certain mechanics altogether. Omnia style is the one that is meant to be made for beginner players who essentially want to focus on learning the fundamentals (at least that’s what I assume) since, while it ditches most of the unique mechanics from the other styles, it lets characters be more resilient and even allows users to perform combos by tapping one button. Additionally, it gives players more meters to perform EX moves and even invincible-on-startup supers.

Certain characters will be locked to a particular style, however. Think of it as how Minazuki has two different playstyles in separate character slots. So, players who are fond of a specific style and archetype will find that very thing in certain characters. The game’s roster is pretty varied, so players will be able to experiment at their leisure.

Phantom Breaker: Omnia is not a complicated game. In fact, it’s the epitome of the Combofiend “characters are just functions” meme. While there are some key differences between characters, I always felt like they were just slight variations of the same playstyle. I like playing Quick Style Ren, but it certainly doesn’t feel any different from Quick Mikoto or another character.

Of course, that doesn’t mean every character has samey combos or something like that. But when playing Phantom Breaker: Omnia, I feel like I am watching two ragdolls constantly being mashed against one another. I’m not kidding, I even tried this with another reviewer, and at one point, it felt less like I was playing a fighting game and more like I was playing Rock ’em Sock ’em Robots or Ballz 3D.

Now, here’s the netcode rant. I would like to play this game and get deeper into the intricate mechanics like Emergency Mode. But guess what? This game has delay-based netcode, which pretty much guarantees that every match will either be laggy as hell or completely freaking luck-based as to whether or not I am going to hit any of my attacks.

This should be a good time to remind the folks that I am not from the United States. This means that as a person from outside of that region, I will be having delay problems regardless of how good my connection is. I have a 100mbps up/down connection with 2ms ping and even then, I rarely get any green-level connections with other users.

At best, this is an issue that can be negated by playing the game against AI or in the story mode (thankfully, you can play 15 campaigns with different characters in that particular mode). At worst, this is just the death knell for every fighting game player who just concerns themselves with playing the game with their friends.

Even Windjammers 2, a game that doesn’t even have anything to do with fighting games – has rollback netcode. It certainly didn’t get a spot at EVO (maybe at AnimEVO, probably), and it’s not a game that will have a very high number of players because of its niche appeal.

This game would’ve been amazing if it was released back when we still had Marvel 3 and other titles to care about. But nowadays, it just feels like it’s forcibly tacked on for fighting game players to moan about when discussing how simple fighting games are murdering the genre. The fact that the developers have mentioned that they have no plans to add rollback netcode will also mean that the game will just have a very specific playerbase.

Should you get it? If anything, this is a good time waster that can be used as a learning tool for fundamentals and flexible enough for some fun matches. However, those matches are going to be limited to local matches or AI opponents because otherwise, you’re going to struggle to find much replay value in it.

The game looks visually stunning once it gets in motion, but I guess that’s to be expected out of a 2D fighting game at this point. Honestly, it feels like Phantom Breaker Omnia lives in a void where nothing happens and nothing matters. It’s stuck in 2011 when people were pretty much used to having trash netcode and fighting games were stuck in an experimental phase. I’d say that it should probably stay there. 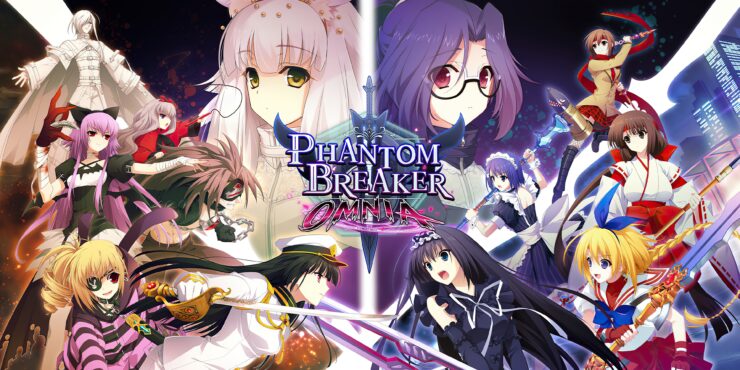 Phantom Breaker: Omnia brings the game to western countries for the first time. However, it also brings what seem to be vestiges of old and outdated game design that work against it. While the fighting mechanics might be easy to understand, every character feels like they play the same way and the combat is so unintuitive it feels like you're just in a button-mashing contest. It works as a novelty and not much else.