Quite unlike the gameplay, the development of Pacer was incredibly slow. Although it might never escape that certain 90s vibe, the Sci-Fi racing genre will always have a dedicated fanbase and some interested onlookers to boot. Pacer has worked hard and spent its time to try and capture both the hardcore and fairweather fans without breaking apart what makes these games so much fun to play and enticing to watch.

Pacer exudes that notion of hardcore, really precise racing you can expect from some games, including a dedicated garage with dozens of customisable parts for each craft allowing players to finetune their machine for exactly their playstyle. But it also blends it with some good arcade fun. Like Mario Kart, anyone can pick and play Pacer and have a good time doing it, but true fans can find so much beyond the basics to master and refine as they take on the many, many levels available.

Even the before mentioned garage that is normally an area that less dedicated racing fans avoid like the plague is accessible but no less intricate. While you can still micromanage your loadout, watching each bar chart precisely to make sure you have exactly the balance you, the game also tells you plainly exactly what you’re doing in simple text to help everyone understand what refinement they’re making.

On the racetrack though, you won’t have time to ponder the small stuff. Pacer feels incredibly fast, as it should. The levels are weaving tracks that broaden, narrows and shoot around corners to give you plenty of challenges and opportunities to overtake and disrupt your opponents. Pacer is a game about lightning-fast reflexes and you’ll need to be ready to follow the track and adapt to your opponents quickly, even on lower speeds. The levels themselves each look and feel different too, with a beautiful and varied colour palette and lovely detail and you rarely get a chance to appreciate. The tracks vary in length to, with some lasting only a minute or so per lap, and others taking much longer.

The sci-fi, Wipeout, feel also includes a range of abilities and weapons to experiment and torment with. If an opponent keeps getting ahead of you at crucial moments, you can spoil their fun by dashing them against the track with some heavy machinegun fire, or lasers! But there’s also mines and a bunch of other abilities that can cut through shields and tear through metal. Instead of randomised weapon boxes like Mario Kart, you’ll have to select a loadout first. The game doesn’t do a brilliant job explaining your weapons, but they all have roughly the same effect once you get to grips with them. You’ll find ammo scattered across the track, which is what you’ll need to fire unsurprising. But you’ll also find shield boosters to, in case someone has been using their weapons against you instead of the other way around. 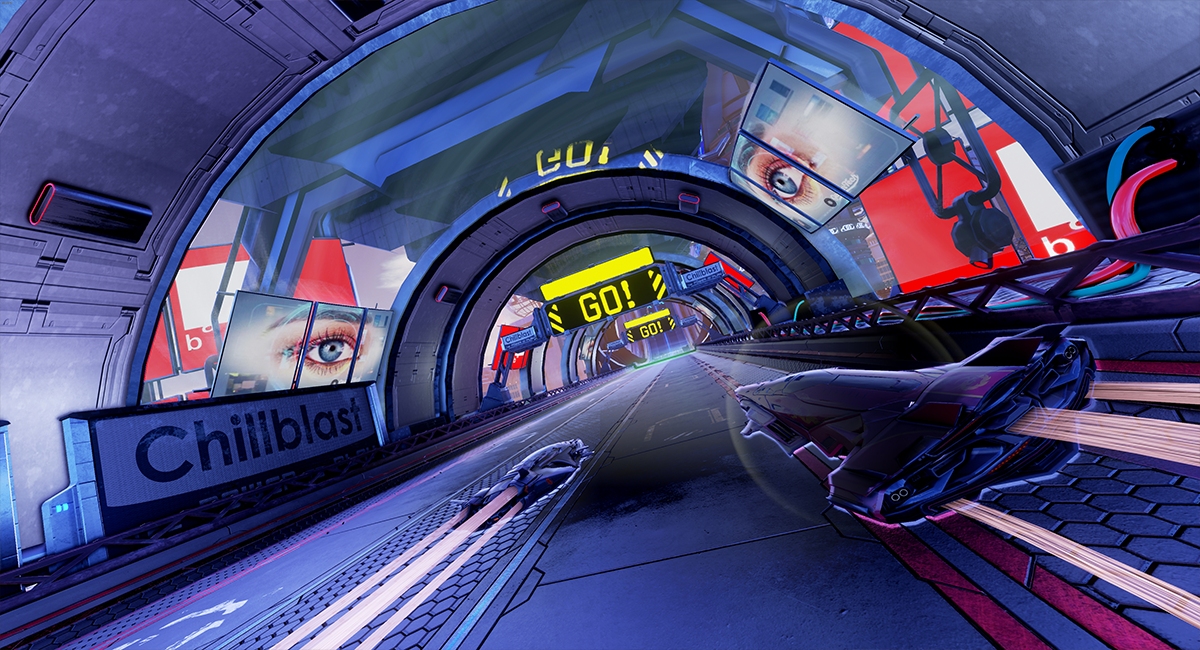 There’s also boost pads to speed things up across the maps as well, placed to either help you out, or slam unprepared players into walls. On top of them, you can use your own boost to, although finding the right time to engage it can be difficult, as long straight sections are relatively rare in Pacer. This added personal boost though can rapidly change the dynamic of a race, letting you steal away someone’s secure lead, or, like the boost pad, smashing you against a wall.

Death isn’t the end for most game modes either, but it’ll probably take you out of contention for winning unless it happens at the very beginning. It only takes a few seconds to respawn, but the speed of the races means that a few seconds is more than the other racers need to leave you behind. It’s a bit annoying that a single mistake or weapon can rob you out of any medal at the end of a race, and this one does feel like it will put off the less dedicated fans, but as you get to learn the maps better, you’ll be better equipped to stay alive. And you can’t avoid this fate by staying offline either. The online community might be the heart of the game, but even the computer opponents will give you a proper challenge on the lowest difficulty.

But if that puts you off competing in the races, you’re in luck because Pacer has a load of different game modes as well. While naturally most of them revolve are moving quickly across a track in some manner, several discard the usual importance of speed, positioning, and route in favour of something wholly different and often much more aggressive. The 'Storm' mode is a cool idea, for instance, adding an element of survival stuff to the contest, forcing everyone to stay in the pack rather than racing ahead. These modes are fun to explore, although it feels like they received less attention and could do with a little further work compared to the solid racing. The audio for the 'Storm' mode, for example, is altogether too loud, unpleasant, and distracting.

Pacer has been in development for years, and you can tell from the moment of polish and fine-tuning nearly every element has had. It has an appeal that stretches out beyond the usual fans of the genre and does an excellent job of letting others experience the often off-putting speed and dizzying maps without losing anything the hardcore fans demand. But it is not a perfect game, and the irritations and lack of proper tutorials make experimentation, loss, and exasperation part of the design.

Pacer is a fun, difficult, and fast racing game that marries some sensible simplicities to an often overwhelming genre. That said, some little oversights can still hamper new players' experience.