I love racing games, especially the futuristic racer genre. You can thank FAST Racing League for that (and, to a lesser extent, Star Wars Racer). The thrill of accelerating to impossibly high speeds on gravity-defying courses is just exhilarating. So, when Redout 2 was announced, I was hooked on it right from the get-go.

My hype levels started rising when I read more information about this game. The game would challenge players further with their positioning in more ways than just being on the right side of the track. You would have to focus on several things, such as your ship's angle and even the pitch. A reworked boost formula would lead to risk/reward scenarios. That and more of the game's upcoming features made me giddy with anticipation.

But then I realized a startling fact. I avoided Redout because the first game was said to have deplorable online conditions and the lack of something as essential as crossplay. And yes, crossplay is essential when you know your numbers are going to dip HARD the week after the game's released.

So, my excitement turned into skepticism as Redout 2 was inching closer to its release date. Thanks to a review code by 34BigThings, I could play the game and finally see if these new implementations would be worth it and if the game was going to do something regarding its online population.

Let's get started with the way Redout 2 handles its content. After all, if you're going to spend less time playing around with other players, you'll essentially be tied to the single-player stuff. Thankfully, Redout 2 delivers in this regard with a gargantuan Career Mode. I feel like there are over 1,000 challenges spread through 5 different classes.

Of course, this goes without counting the game's Arcade Mode and custom matches. So, you'll be able to experience the game's 36 tracks in different ways. You could go on a Last Man Standing mode that essentially acts like Elimination where the last-place racer gets eliminated after each lap; a Boss mode which essentially acts as an endurance mode where you go through 3 different tracks in a single race; and then you have your usual Time Attack and Standard race modes.

Career Mode is definitely going to test you, though. Right from the get-go and after the game's tutorial, Redout 2 takes its gloves off and will put you against titanic tests of speed that will push you to the limit, even in the lower classes. The game makes it abundantly clear that it has a steep learning curve meant to catch the hardcore audiences.

For example, some of the racers you face off against will have far better specifications than you. In some individual trials, you have to ace the race track while going at immense speeds. You know, stuff that is meant to keep you on your toes while also ensuring that you stay on your toes.

Now, I would agree with this level of challenge anyway. After all, I beat F-Zero GX's Very Hard mode. But then the real problematic aspects of Redout 2 started poking their heads out and making it abundantly clear that while the challenge is hard, you are also handicapped from the get-go.

RedOut 2 is a twin-stick racing game in which you use both of your control sticks to properly steer your vehicle: Left Stick handles your turning, Right Stick handles the strafing. If you do one without the other, you're more than likely to slam against a wall when you run toward tighter corners.

But the Right Stick also has another layer of control. As you race through the tracks, you'll begin to notice that they will also go up and down. This means that your Right Stick will also be used to correct your ship's pitch. Pitching upward will let you take the upward slopes without slowing down, while pitching downward will let you take on steep downward slopes without basically flinging yourself off the track.

You also have access to two different types of boost in Redout 2. One is a normal-type boost that is always available at the push of a button. The other is a hyper boost that becomes accessible a few seconds into the race and needs to be recharged between uses. The hyper boost is not too different from the normal boost, but I have the feeling that's because the developers want you to use both of the boosts together in huge streaks of speed. At least that's what I do.

Of course, boosting a lot will start to overheat your ship. If you let things go too crazy with the overheating, your ship will begin to lose its health. Once it reaches zero, you go boom and die, so avoid doing that. But don't worry; your ship's health regenerates so long as you don't slam against walls while racing.

But, of course, this is a futuristic racing game, which means you will face flying challenges mid-track. While you're flying, you must make sure to land the right way by adjusting your ship's position using both your analog sticks, left and right on the D-Pad, and even your boost. If you miss the track, that also means you are exploding, so you have to make sure you land just right.

As you can see, Redout 2 has a lot more going on than just "go really fast while pressing accelerate and don't crash on curves". Players are expected to keep track of all these functions while racing against other players or the CPU while taking on the race tracks. For some players, this might be a little bit too much. Thankfully, the game also allows you to have an assist function that will automatically fix your positioning.

At least that's what I would say if it actually worked. The AI assist has managed to show issues correcting my positioning while landing; on some occasions, it only worsened my situation. I ended up turning the feature off because it was doing me more harm than good while also limiting some of my options. Maybe this will be refined in later updates, but for now, the AI in charge of assisting the players who just want to focus on the race definitely needs some additional tweaking.

Not helping matters is the way a lot of these race tracks are designed. There are a lot of problems with Redout 2's track design that make me wonder if this is meant to be a challenge or a boring game of trial and error where you downright have to memorize all the gimmicks the track has before you can comfortably race in it.

I can't even begin to count the occasions where I didn't even know where I was supposed to land when going from one ramp to the next portion of the track until I was already missing the other platform by a mile. The game tries to inform you through the HUD of what is coming but does a terrible job. In some cases, the game told me to prepare for a steep curve but then said curve is not too pronounced, leaving me to often slide off the track because I took what I expected to be a tight curve.

Honestly, I feel like the majority of this game's problems when it comes to track design would've been solved by having a mini-ma. That would also provide an additional nugget of info that players could use to make a better judgment with incoming curves and swirls (not to mention so that they know where they are supposed to go while flying).

But that doesn't compare to what I think is AI that rubberbands like a slingshot. It's not even subtle. On many occasions, I've had CPU opponents downright fly toward me at incredibly high speeds. In some particular instances, I believe that some of my opponents managed to bring a teleportation device into the race because they suddenly gained 3 or 4km leads on me in a second when they were only a few meters behind me.

This honestly surprises me because when I purposefully lag behind my opponents to see how I can take the game's curves, they often are seen falling off cliffs, running (and subsequently grinding) against walls, and just acting as if they didn't even know what they were doing at all. How they manage to get ahead of me or even anywhere near me when I have a huge lead is beyond me.

This goes back to my initial point regarding the game's difficulty and career mode. The AI in RedOut 2 (alongside the horrendous track design that encourages trial and error gameplay and an assist function that is more of a hindrance than help) makes me wonder what even is the point in racing against what 34BigThings calls "difficult".

If I have fun in F-Zero GX, a game that actively cheats on you may I add, and I downright feel frustrated when playing Redout 2 in comparison, you can imagine how much that says about this game's problems. This isn't unbeatable stuff, by the way. Anyone can downright beat all of this if given enough time.

But what's the point of going above and beyond the call of duty? Well, according to 34BigThings, it's paint jobs. See, this is the most annoying part of Redout 2. They touted that the game has 12 unique chassis that have customizable parts. But said customizations are locked behind the game's Career Mode. Not only that, but 90% of the parts you get are just cosmetic, while the parts that are supposed to help you improve your vehicles (or even the chassis themselves) are the other 10%.

Most of the rewards you get from Career Mode will not help you in the slightest. So you have to trudge on against overtuned opponents to gain worthless paint jobs until you finally get the pieces that increase your stats and let you move up in the ranks, only for the next racers to be way ahead of you again when it comes to specifications.

And let's be honest, you will just be tied to the single-player stuff because online is downright laughable. I've had many matches in which we only had three players participating or games where players (or myself) often DC'd mid-match because of network issues. For a game that supposedly has 12-player support, I would be surprised to hear if there was at least one match with 12 players that could be completed.

But hey, I managed to beat that cheating AI just to prove a point, right? I think my conclusion regarding Redout 2 can't be any more obvious, so I'll skip the great graphics and downright boring music to give this game its rating. 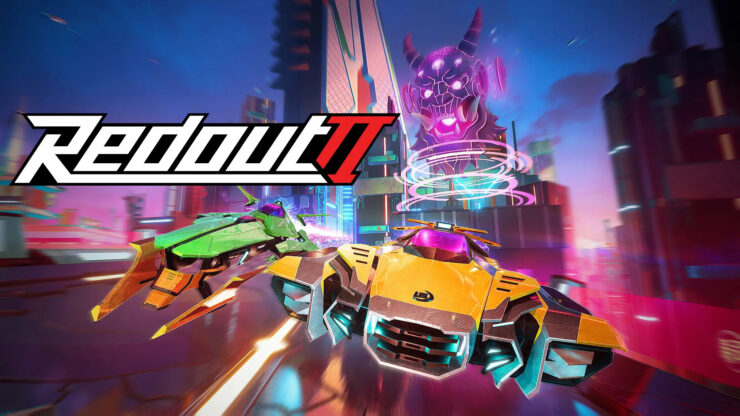 While Redout 2 is a fun experience for the single player, it definitely lacks in a lot of areas and can become overwhelming to a lot of players for a myriad of reasons. The game's AI is also very incompetently designed with incredibly slingshot-like rubberbanding that makes competitors look like absolute klutzes when you're falling behind them or like they have hyperspeed devices on the slightest advantage. Everything is locked behind stages while most of the unlockables are just cosmetics rather than any substantial upgrades.

Redout II Release Date Set for May 26, 2022 According to Latest Trailer