Orcs Must Die 3 is a game where you must defend a magical rift from relentless waves of greenskins. But while the game, style, and presentation of Orcs Must Die is fun, light-hearted and irrelevant, it came at something of an opportune time for itself, as it releases when several extremely high profile fantasy franchises are beginning to change the way they depict orcs. This game might be inspired by the same orcish mythos mired in the stereotypical tropes and racism, the depiction within Orcs Must Die isn’t nearly as problematic.

Orcs Must Die 3 is a comedic tower defense game with light storytelling elements. Although every game and piece of media should be aware of its own theme and messaging, even if they are unintentional, the theming behind Orcs Must Die 3 is one of fun, not a critical take on racial politics.

The game itself takes place over 17 arenas where you have to plan, execute, and adapt a sprawling network of traps to prevent the orcs from reaching one end to the other. Fans of the tower defense genre will find a lot of hallmark challenges as they progress through the levels, like multiple avenues of attack and resistance enemies. Some more unlikely threats shake up the formula as well though, such as some levels focusing on verticality, and that makes Orcs Must Die such an enjoyable game to explore.

If you’re completely unfamiliar with the series, the other biggest difference between it and more traditional tower defense games are the action elements. You aren’t some omnipotent observer watching the battlefield from above, but a wizard fighting in the corridors yourself. The playable characters play slightly differently, but they still have access to all the same spells and traps. This adds some more considerations to the game. On the one hand, you can now thin the numbers of the encroaching hoard or stand at the back and catch any that survive your maze, but it also means you can’t see the whole battlefield at once and have to trust your work to kill the orcs for you sometimes.

For the most part, it works well and adds a level of hands-on control to the fights, especially as more threatening enemies and bosses take to the field. Sometimes it can be annoying though, especially for perfectionists, when a single enemy slips by unnoticed and makes it into the rift. Doubly so since there is no option to reset the current wave and you’ll have to start from the beginning of the level if you want a perfect run. And in the heat of the battle, you’ll struggle to keep track of some of the smaller creatures darting past. 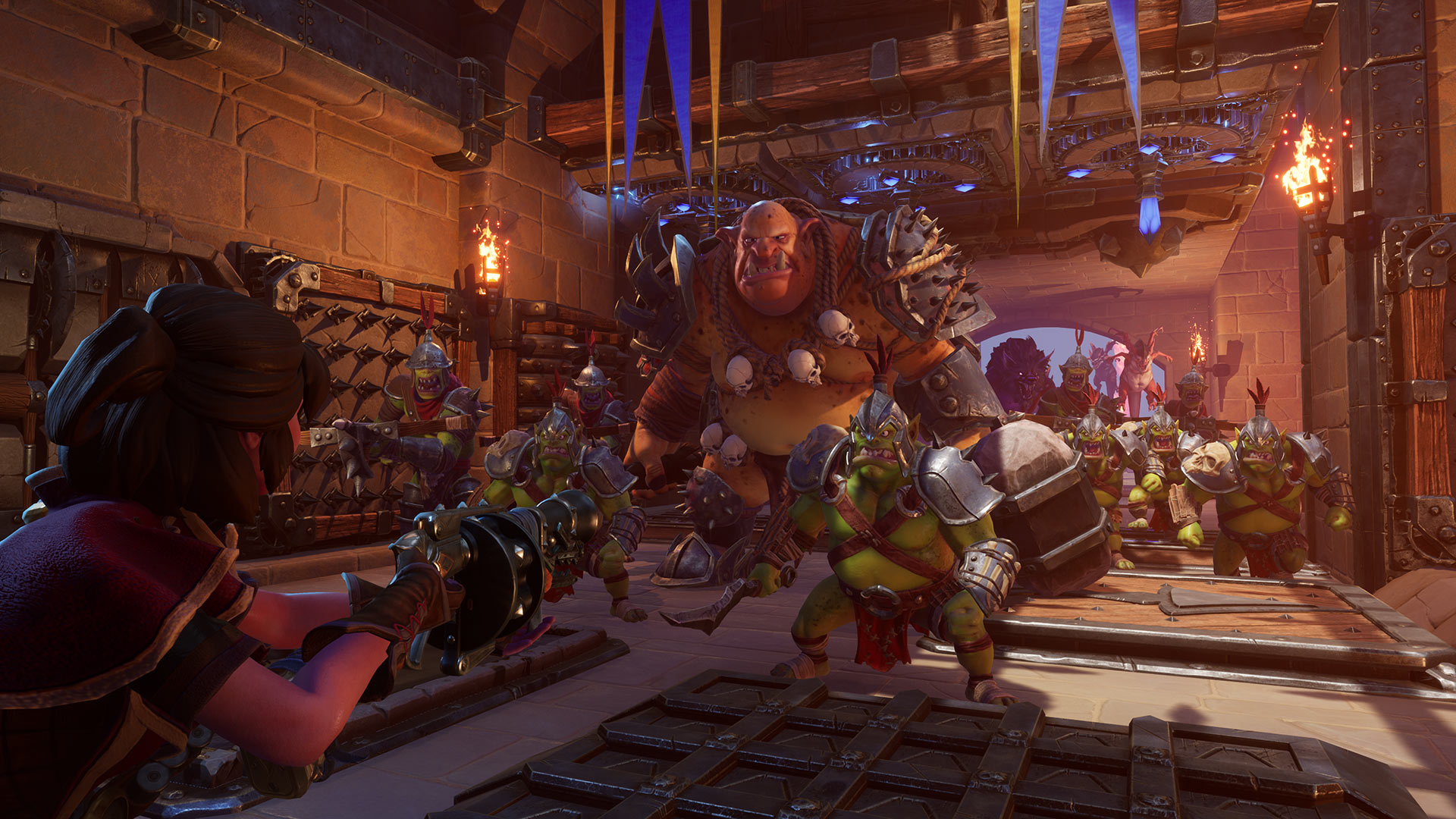 Robot Entertainment, the studio behind Orcs Must Die 3, have given credit to Stadia’s power that has allowed them to include so many enemies in a single battle, and it's hard not to be impressed when a throng of orcs emerge like a tide at the edge of the map. Seeing them approach is genuinely exciting as your traps begin to thin them out, and if you manage to repel them, there's a real sense of satisfaction from dispatching so many. In the largest levels, the game can be completely filled with swarms of orcs and I never noticed a single crack in the framerate. And it's not like they've had to sacrifice the graphics to do that. While it certainly doesn't compete with The Last of Us 2, Orcs Must Die 3 is a pretty, comic styled game with lots of detail to ignore as you cut down a massive hoard of orcs. It's also worth noting that I never spotted a moment of latency either. There was absolutely no noticeable pause between my input and the game reacting, which is great given how quickly you need to move and react during waves.

The largest battles are called Battle Maps, where you’ll be defending against literal armies of orcs. They also give you access to some of the biggest and most powerful traps available in the game. You’ll get catapults, battalions of archers and giant shock pads that can kill dozens in an instant, and you’ll need them to rid the hundreds charging you. These battles change up the typical tower defense formula as well, demanding that you adapt away from creating snaking tunnels of death to fighting the villains more or less straight on.

The variety of traps and weapons is impressive as well, and there’s loads of room to experiment with different strategies and plans to. There’s an upgrade system that does start to tie you to your favourite traps as you first progress through the story though. And that’s because there is a huge difficult spike about halfway through the game. At the start, you’ll be able to beat back the armies with relative ease, but after the second battle map, your traps and plans will barely be enough to hold them back. 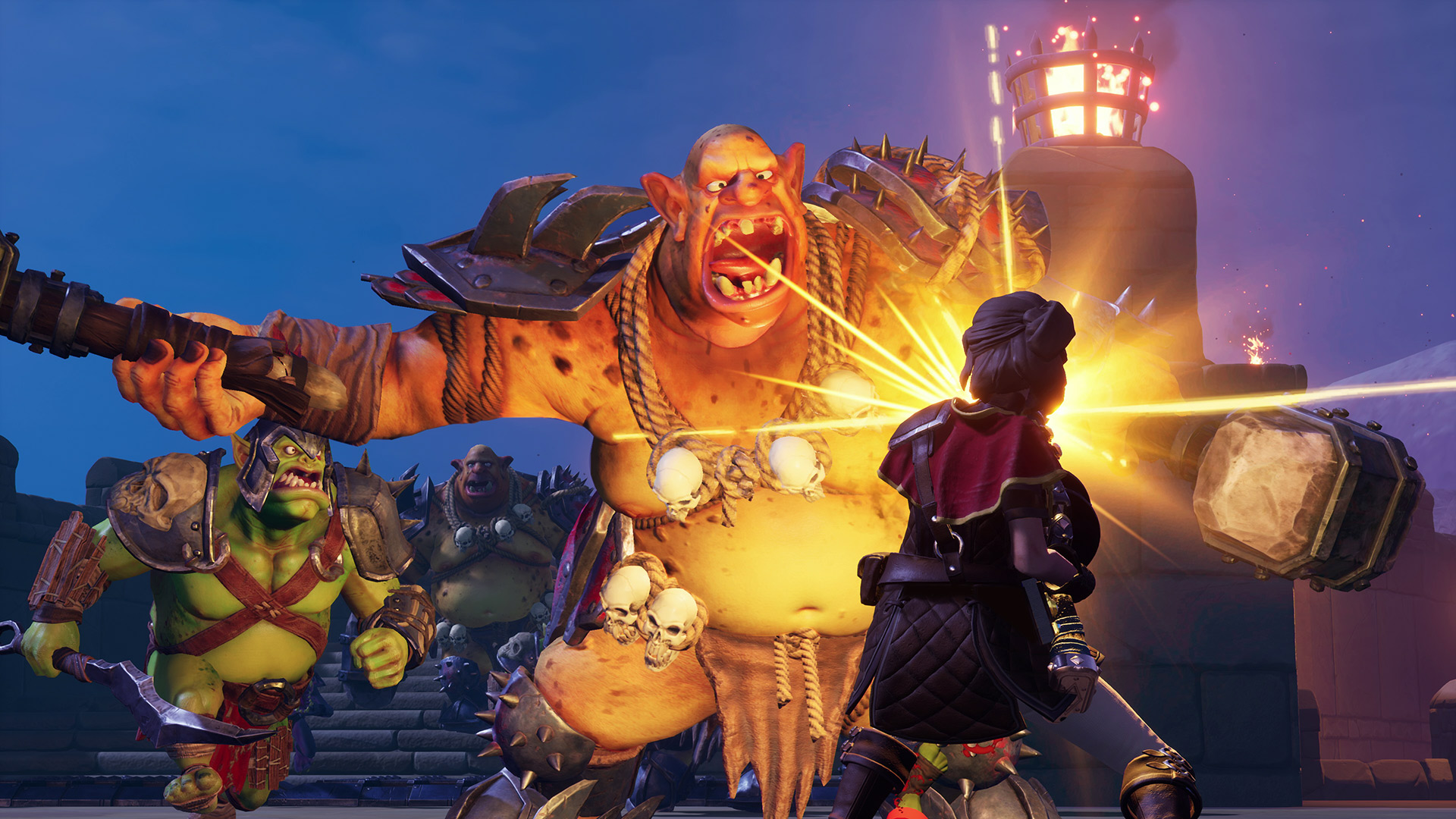 No matter what I tried to do or how I tried to adapt, I found the only real solution was to stop relying on traps and instead focus on the action myself. I started kiting the larger creatures will picking off the smaller ones before they got away, only really building anything effective for the last few waves when I had enough points. A gentler curve would have been nicer, as the sudden ramp-up changes the dynamic of the game. This is a game that I don’t think was meant to inspire stress, but yet you’ll find it when kobolds set off all your traps without being killed by a single one.

Inside the levels themselves, you’ll find a much more friendly curve to the waves, even if it jumps wildly between them. Each wave gets just a little bit harder after giving you a chance to make your traps a little bit stronger. It's engaging and keeps your attention through the entire level.

The comic stylings, the variety of traps and Fortnite like combat all make this game feel like a perfect introduction to the genre for younger audiences. But the difficult spike and the size of some of the levels that you have to keep in your mind might turn off the less experienced. Still, Orcs Must Die 3 is a fun, challenging game that hopefully shines through on a platform that hasn’t yet found its audience.

Orcs Must Die 3 is a captivating, funny, and varied tower defense/action game hybrid best suited to those that don't want to just be armchair generals. But with a massive difficulty spike halfway through the campaign, it doesn't quite find the perfect balance.