While role-playing games may not have changed all that much over the course of the years, there was a time when they were much harder to get into, mostly due to the fact that these games actually made the player take on the role of a true adventurer, meaning that they were to venture into dungeons without knowing anything about the dangers that could have been lurking within. Limited resources and being outnumbered by monsters completed a very engaging, but also frustrating, picture. Operencia: The Stolen Sun, developed by Zen Studios (a Hungarian studio known mostly for its Pinball games), manages to capture the spirit of the old-school first-person dungeon crawler RPGs, but it also modernizes the experience in some very interesting ways, so much that even those who never played a similar game will be able to enjoy it to the fullest.

Operencia: The Stolen Sun's story is a simple tale of good vs evil. At the beginning of the game, players witness with their own eyes how the legend of King Attila was born. This powerful King managed to unite the entirety of Operencia and prevent, with the help of a few companions, the invasion of the Middle World by the forces of the Underworld. But peace did not last: following the death of Attila, chaos came to grip Operencia once again, with the Underworld attempting yet another invasion which seems poised to be successful. It will be up to the player, who controls a customizable young farmer who abandons his simple life to follow his dream, to prevent this from happening and save Operencia like King Attila did years back.

While the story is certainly simple, it is nonetheless quite interesting to follow. The writing is excellent throughout the whole game and the beautiful 2D cutscenes give Operencia a fairy tale atmosphere that's very gripping. All characters are written extremely well, and every interaction reveals new details on the world and the characters themselves. Those who enjoy Central European mythology will also find a lot to enjoy in the lore, as there are not only characters but also locations inspired by it.

The gameplay in Operencia: The Stolen Sun is as old-school as the story, but every feature has been modernized so that it may be enjoyed even by those who are looking for a more relaxed, streamlined experience. Once the prologue is over, you get the chance to create your character. The character creator is very simple: there are four different possible male and female characters, so, in this regard, possibilities are a bit limited. During character creation, it's also possible to choose between three different classes - Warrior, Hunter and Mage -, the character's Origin and do some stats customization. All builds are viable in the game, so don't be afraid of experimenting a bit during character creation.

Being a first-person dungeon crawler, you will be spending a lot of time inside dungeons and you will likely enjoy every second of it, too, as they are very well designed. For starters, players have the chance to choose how mapping has to be done, with one mode resembling how it used to be done in older games, and the other being much better for less-hardcore adventurers. Actual movement in dungeons is as old-school as it can get, as players can only move to the square that us in front of them, and to move to the right or left, they must turn around. It feels a little clunky today, but this only adds to the feel of modernized old-school dungeon crawler that permeates the whole game.

Dungeons in Operencia: The Stolen Sun come with a variety of puzzles which involve players pressing switches, finding items like keys and so on. While most puzzles are nicely designed, a couple of them feel somewhat arbitrary and are solved through trial and error. While exploring dungeons, players will also have to fight enemies, who are seen on the field, so there are no random encounters whatsoever. If players manage to approach them from the back, they will be able to ambush them and gain a sound advantage in battle.

Like most of the game's mechanics, Operencia: The Stolen Sun's battle system is an old-school turn-based system with some tweaks and fixes that make it a feel a bit more modern. Up to four characters can take part in battles, each one featuring two different basic attacks (for short and long range) as well as a variety of skills, which not only consume resources to be used but also come with cooldowns. Enemies are placed on three different rows, and their position determines how effective an attack is: enemies in the back row take more damage from long-range attacks, while those in the front take more from short-range ones. Status ailments, attacks that hit multiple targets and more complete the picture.

What sets Operencia: The Stolen Sun apart in a clear way from modern games is how resources are very limited for a good chunk of the game. To save inside a dungeon and rest, players need firewood, which has to be found in dungeons. Healing items are also limited, so you'll have to strike a good balance and avoid fighting enemies if not completely necessary. Later on, the availability of resources improves thanks to the opening of a shop. Even with limited resources, however, Operencia: The Stolen Sun is a rather easy game on the regular difficulty level: there are a few options that can be selected at the beginning of the game that make it more challenging if the player so desires.

Operencia: The Stolen Sun's presentation is another of the game's best features. The game, powered by Unreal Engine 4, looks gorgeous most of the time thanks to its beautiful art direction, which brings life to this mythical land. Enemy models are also well done and so do characters, despite them not truly appearing on the screen outside of some high-quality images depicting them. The game also runs quite nicely on a system sporting an i7-3770 CPU, GTX 980 Ti, and 16 GB RAM, with no issues and slowdowns of any kind at max settings (1080p resolution).

Everything considered, Operencia: The Stolen Sun has very few flaws and it is an enjoyable experience from beginning to end. The old-school elements may turn some players off, but those who can even just tolerate them will find a very solid dungeon crawler that goes straight to the point with no filler content whatsoever. Which is very rare in today's gaming world.

Reviewed on PC (code provided by the publisher). The game can be purchased for Xbox One directly on Microsoft Store. 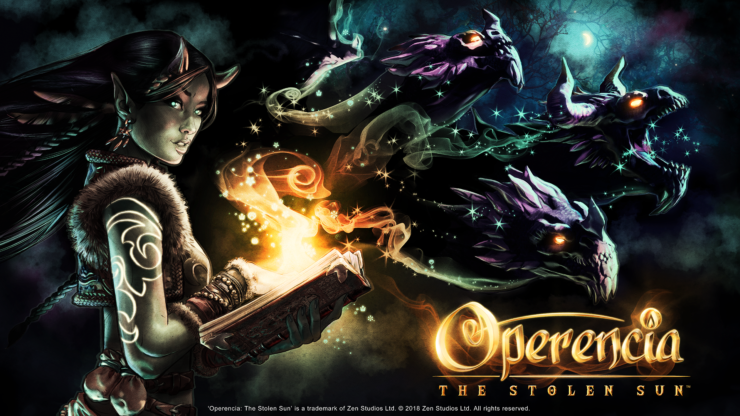 Operencia: The Stolen Sun is an excellent throwback to old-school first-person dungeon crawler games, complete with solid mechanics, a predictable yet enjoyable story and a very well written cast of characters. While the old-school influence is dominant throughout the game, many of these features have been modernized, so even those who never played the classics will find something to enjoy in Operencia, from the beautiful art style to the turn-based battle system and dungeon exploration.