Observer is among the most interesting first-person adventure games released in the past couple of years, masterfully combining a narrative-driven experience with mechanics lifted from point and click adventure games to present an extremely engaging title. Not content with having released one of the best adventure games of 2017, Bloober Team decided to further explore the game's universe with Observer: System Redux, which is both a remaster and expansion.

At its heart, Observer: System Redux is pretty much the same game as the original. Controlling the Observer Daniel Lazarski, played by Rutger Hauer, players will discover some very uncomfortable facts about the world order established by Chiron following the digital plague that changed the world forever. The main story changed very little from the original in Observer: System Redux, as the only additions are three completely new sidequests that have been seamlessly integrated into the main story and provide some new information on the game's universe. They are nothing extraordinary, to be honest, but they are a welcome addition nonetheless.

The gameplay is where Observer: System Redux makes the biggest changes, and they are all extremely welcome. Like in the original, Daniel Lazarski will have to use the Electromagnetic Vision and the Bio Vision granted by the Death Eater to scan electronic devices and discover biological evidence to solve some simple puzzles and move the story forward. There are times when Daniel will have to contend with some rather unsavory individuals, and avoid contact at all costs during stealth sequences that have been improved a lot.

These stealth sequences were among the most frustrating moments in the original game, as they broke the game's pace with a huge difficulty spike: get discovered once, and it's back to the beginning of the entire stealth segment. In Observer: System Redux, however, these segments are way less frustrating, as the game is way more forgiving and you can afford to make a few mistakes here and there without having to start over.

Observer: System Redux also makes some changes to the hacking mini-game, which was another frustrating mechanic found in the original. Not only these mini-games are now very easy to complete, as you only have to discover letters and numbers that don't change on a panel, but they can also be skipped in their entirety, a great option for those who just want to experience the story. Neural Interrogations have also been improved with some slight changes that make them faster and more enjoyable.

The original Observer looked quite good back in 2017 and still looks good today, but it definitely cannot compare to Observer: System Redux. Almost every element has seen a considerable upgrade, from textures to character models and lighting. The game supports ray tracing as well, and it does make a huge difference, enhancing the atmosphere a whole lot for the entire duration of the adventure. On PlayStation 5, ray tracing can be toggled on and off from the Options menu, but there is, honestly, no real reason to play without it: performance is impacted, with some frame rate drops here and there, but it's not a big problem for a slow-paced game like this. Without ray tracing, the game runs at 60 FPS with little to no drops.

The PlayStation 5 version also comes with some unique features that take advantage of the DualSense controller, but they are definitely not the best implementation of haptic feedback and adaptive triggers we have seen in the console's launch titles. Haptic feedback is used to highlight not only any action that Daniel is performing, like opening drawers, moving furniture, and accessing terminals, but also his state of mind during transitions, with the controller vibrating in time with the character's heartbeat, just to make an example. Adaptive Triggers support is somewhat more basics, used to simulate door handles' resistance and in a few other instances. Despite their basic implementation, these features do make the experience feel more immersive, and in a game where the atmosphere is king they are a welcome addition nonetheless.

Observer: System Redux is every bit as good as the original game, if not even more, thanks to the additional sidequests, quality of life changes, and visual improvements. It is still the same game at heart, however, so those who did not go crazy for the original 2017 release will not change their opinion. Everyone else, however, will appreciate all the changes, as they do manage to improve the experience in more than a few ways. 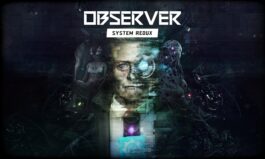 Released as both a remaster and an expansion, Observer: System Redux manages to fully deliver its promises, improving the original's experience with new meaningful content, quality of life changes, and massive visual improvements that leverage the power of the new consoles. The game hasn't changed a whole lot since the original, so those who did not like it in the first place will not change their minds with Observer: System Redux, but those that did will find the remaster to be a worthy purchase.