Last year, Bloober Team delighted horror fans all over the world with Layers of Fear, a very good first person horror game featuring a rather disturbing story and characters as well as a setting that can only be described as the true stuff of nightmares. Now the team is back with yet another first person adventure game which addresses some of the issues of Layers of Fear while providing a setting and a story that can potentially be even more interesting, depending on the player's taste. Ladies and gentlemen, get ready to enter the twisted world of Observer.

Observer is set in Poland in 2084, a time where the mega corporation Chiron took control of Poland following a catastrophic event known as the digital plague, which took the lives of thousands. The survivors of the terrible war that accompanied the digital plague didn't get it any better than those who died, as most turned to drugs to distract themselves and escape from a society where even thoughts are under scrutiny by the government and can be used against them at any time. To keep citizens' thoughts under control, the corporation funded a special police unit called Observers of which the main character Daniel Lazarski is part of. The Observers have the license to hack their targets' memories and fears through the Dream Eater, and eventually, use them to stop them if they may somewhat threaten the new order.

One day, however, something strange happens to Daniel Lazarski, something that will change his life forever. Receiving a message from his estranged son, the Observer journeys to the Class C slums of Krakow to find his son, not knowing that he will come to learn some uncomfortable truths as well as journey through the deepest and darkest fears of criminals and victims alike.

As far as setting, story, and characters go, Observer is an incredibly interesting game. The dystopian setting is very interesting, with hints of what happened during the digital plague and its aftermaths stimulating players' curiosity. The story also tackles some issues of our current society and where it might be headed if things get out of control. Daniel Lazarski is also a likable character, despite not being terribly original in his characterization, also thanks to the amazing voice acting work provided by Rutger Hauer, who portrayed the legendary character Roy Batty in Blade Runner. The other characters are also well done, with their fears managing to paint some quite believable pictures. If you like dystopian settings, you definitely won't be disappointed. On the other hand, horror fans might be slightly disappointed in the game. Unlike Layers of Fear, the main focus of Observer is not the horror element, which is still present, but far from being in the forefront.

As already mentioned, Observer manages to fix some of the issues of Layers of Fear, namely the limited player agency. While the whole adventure is pretty much on rails, with areas not relevant at the moment being locked, players now have a lot more to do. While searching environments for clues, players can check out items in greater detail as well as use the Electromagnetic Vision to scan for electronic devices and the Bio Vision for biological evidence granted by the Dream Eater. Searching through the environments with both will allow players to gather clues required to solve puzzles and get closer to the truth. In the long run, things may get a bit stale, as there isn't much variation to all this, but the way each situation is presented helps quite a bit.

Hacking sequences, in particular, offer impressive transitions which manage to make players feel both excited and uncomfortable, prompting them to move forward in order to see what else the team has come up with. Just like in Layers of Fear, Bloober Team put a lot of care into these sequences, and it clearly shows. Sadly, some forced stealth sequences drag the whole experience down, breaking the pace yet not in the best way.

Even without the hacking sequences, Observer looks quite good, with environments, character models, and items being well detailed. The game is definitely not the best looking game of the year, but graphics get the job done, especially when played on PC at max settings. As for the rest of the presentation, Observer features some minimalistic in-game menus which get the job done. The soundtrack is also appropriate, and voice acting is of very good quality, as already mentioned.

Strictly speaking about the PC version of the game, it's definitely the best way to enjoy Observer. The game runs great at 1080p, max setting on a machine powered by an i7-3770 CPU, GTX 980 Ti GPU and 16 GB RAM. Among the settings that can be tweaked are the usual Antialiasing, Shadow and Textures quality, Resolution Scalability and others. The game also lets players toggle SSAO, SSR, change SSS quality and enable Separate Translucency, so there's plenty of possible tweaking if the game doesn't run well on your machine.

At the end of the day, Observer is an extremely enjoyable game featuring a very interesting setting, memorable characters and some good psychological horror sequences that fans of the genre will surely enjoy. While the game features more agency than in Layers of Fear, the actual gameplay is still, sadly, the weakest aspect of Observer, as the whole gathering of clues using the two Augmented Vision modes doesn't change much during the course of the game. Still, those who like a good story set in a dystopian future will find plenty to like in the game. 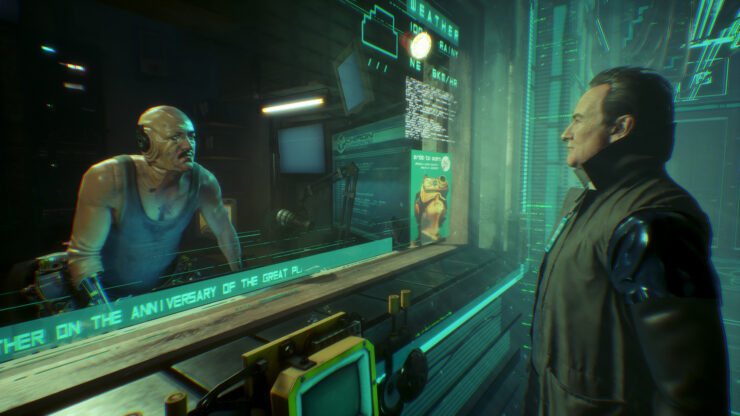