MSI’s Tri Frozr heat sinks are some of the biggest heatsink cooling solutions that I have ever tested. I first tested the Gaming X Trio when MSI released the 1080 Ti variant back in 2017 and that was a very aggressive design in its own right. With the RTX 30 series cards, MSI has further refined the Gaming X Trio design. The card measures the same at 323 x 140 x 56 mm and weighs in at 1565 grams. The card is also slightly taller at 2.7 slots height compared to the 2.5 slots height of the previous model. 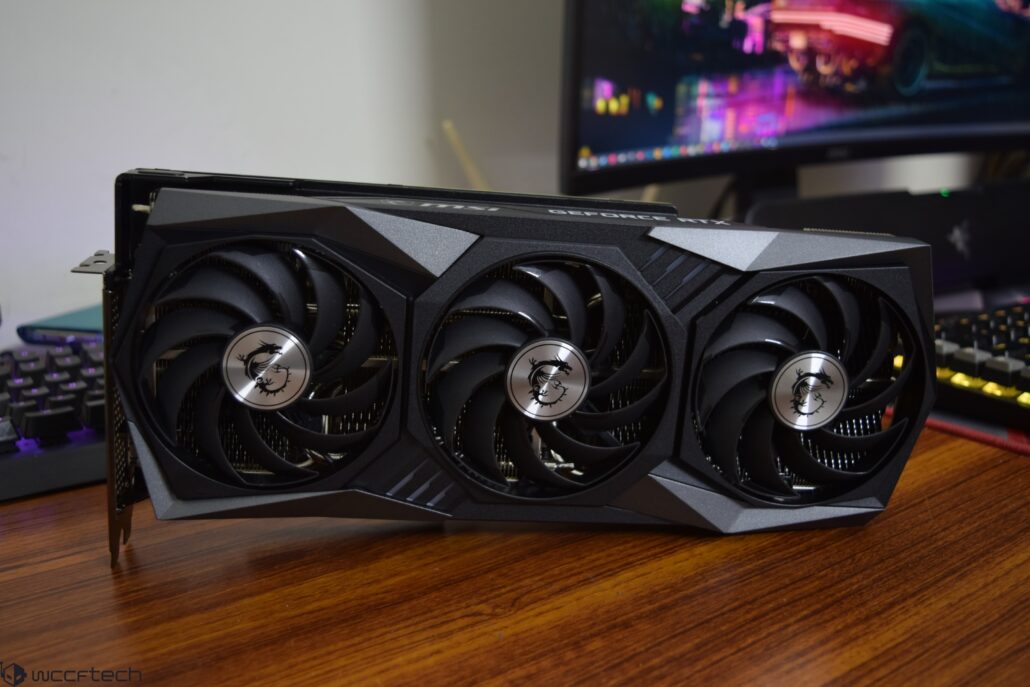 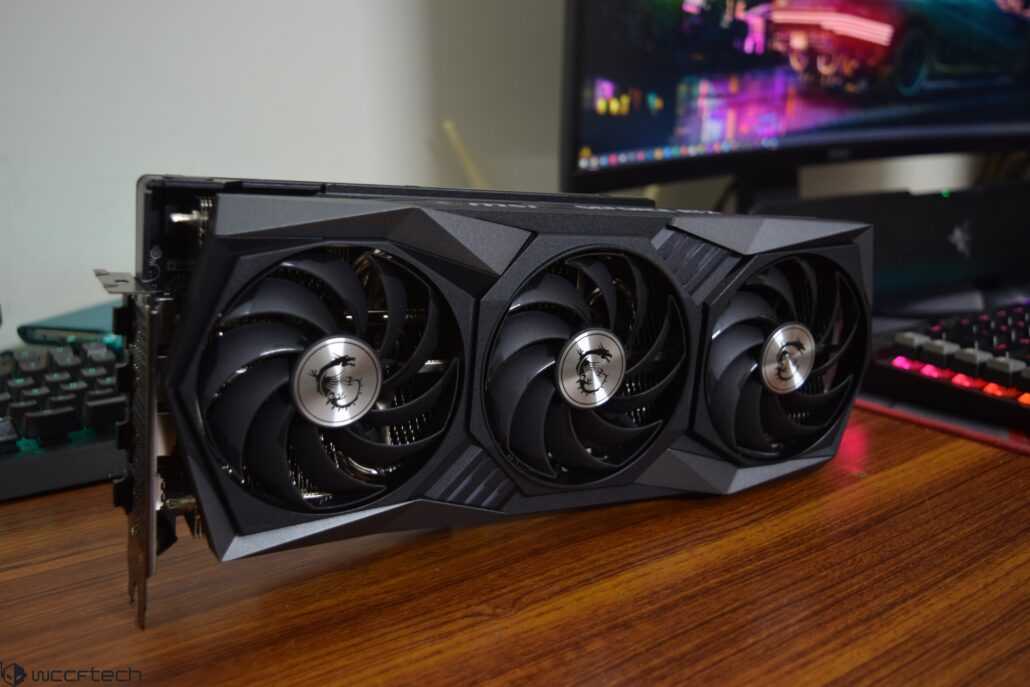 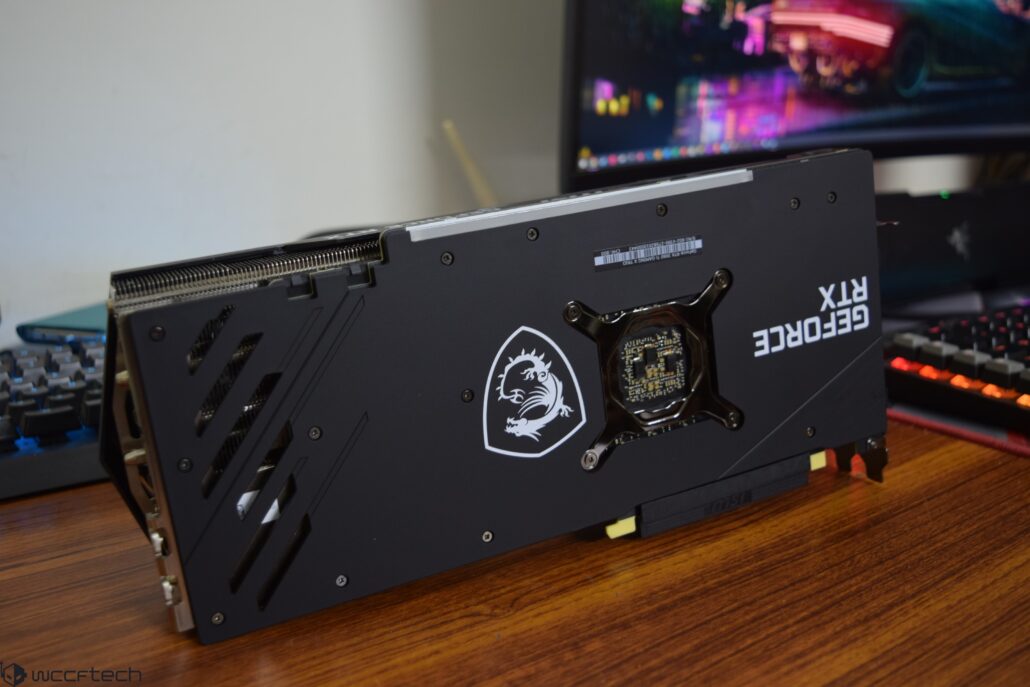 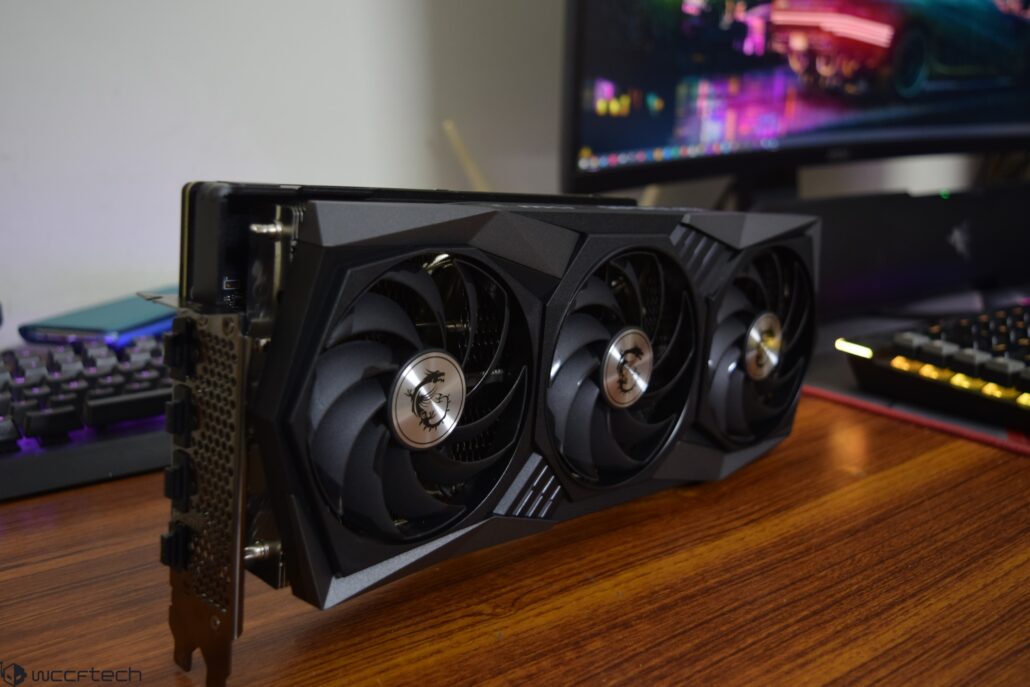 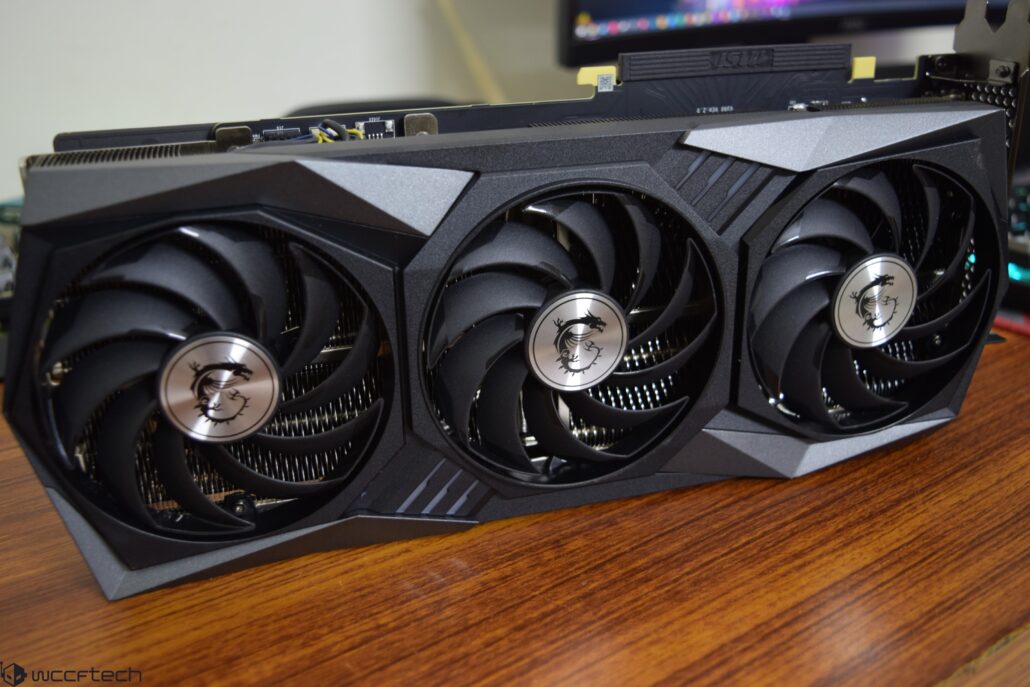 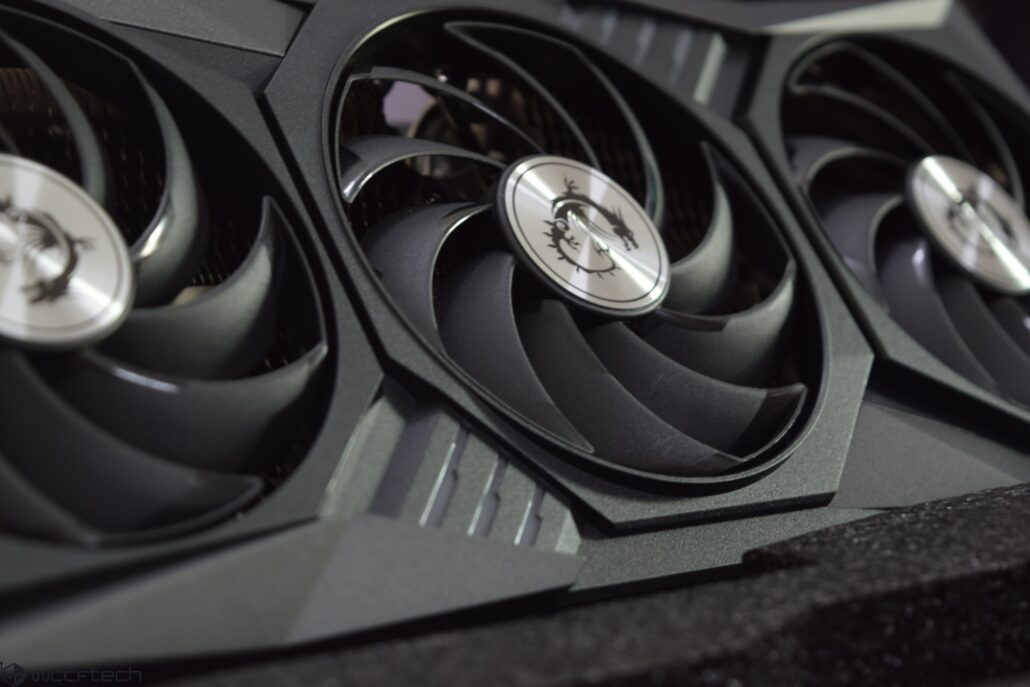 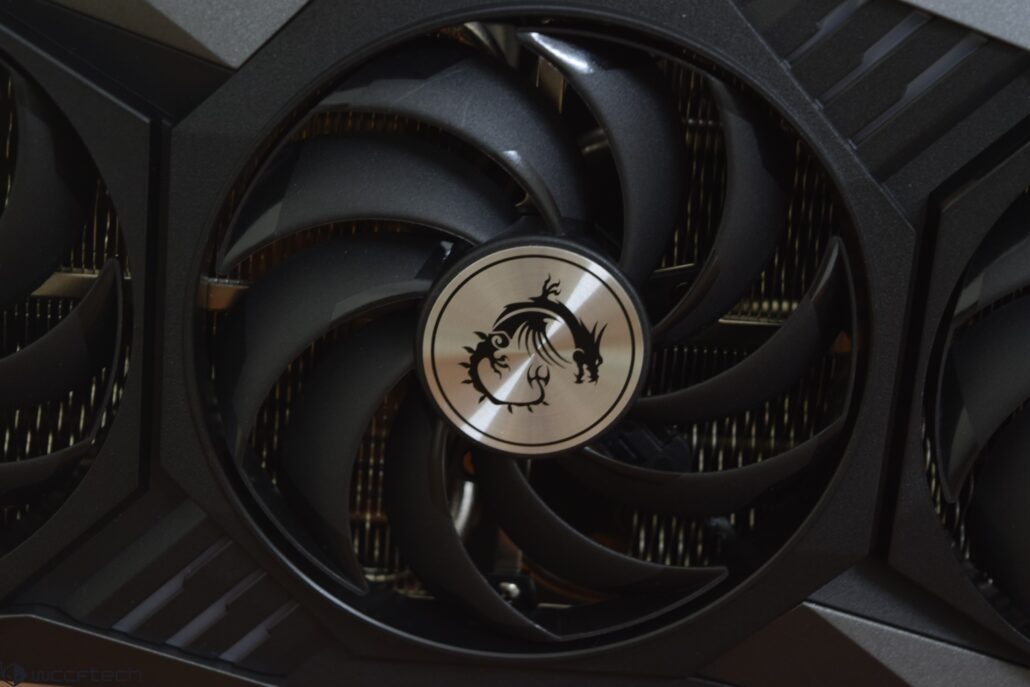 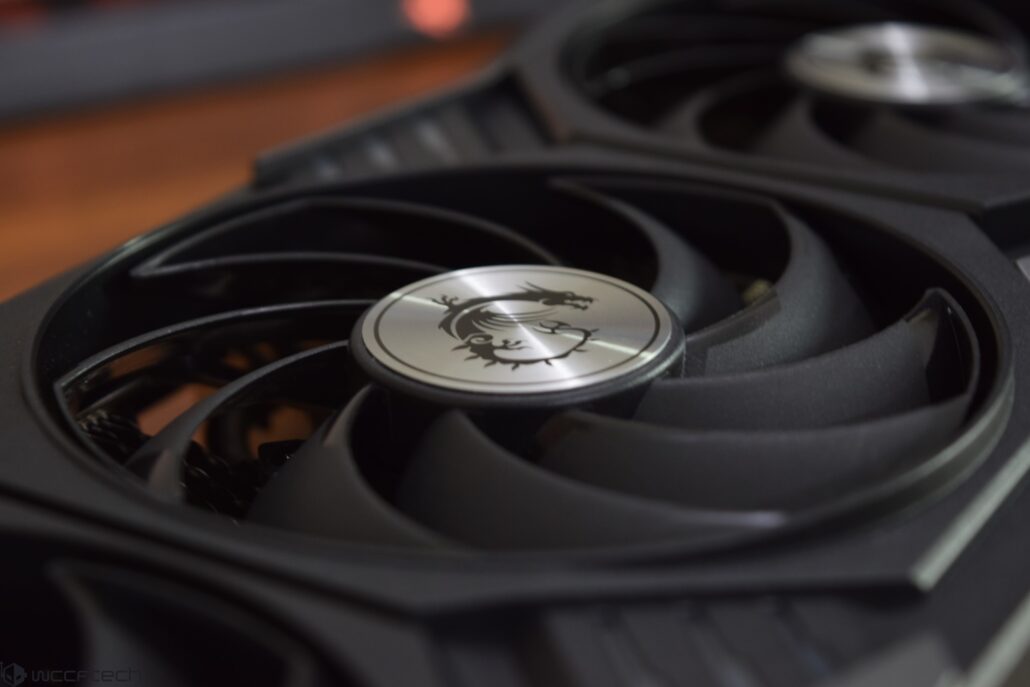 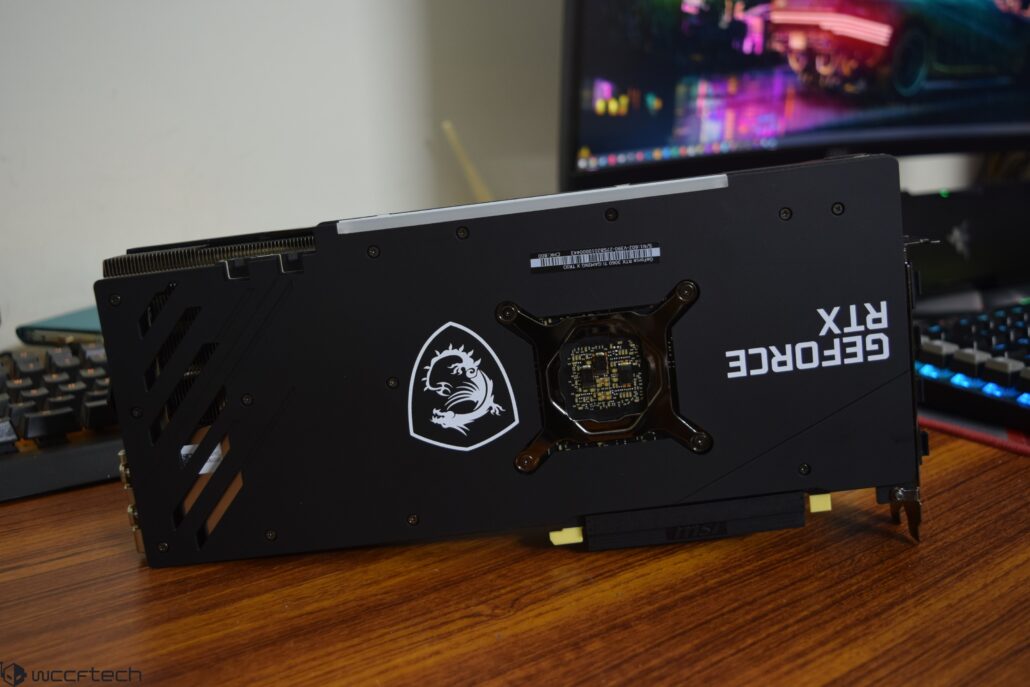 There are cutouts in screw placements to easily reach the points on the graphics card. We can also see the MSI Dragon logo on the back which looks stunning. MSI is also using heat pads beneath the backplate which offer more cooling to the electrical circuitry on the PCB.

The most interesting thing to spot on the back aside from the backplate is the large retention metal bracket which adds more mounting pressure to effectively disperse heat from the GPU to the heatsink. The exhaust vents on the back also help push air out for increased heat dissipation which leads to better cooling performance. 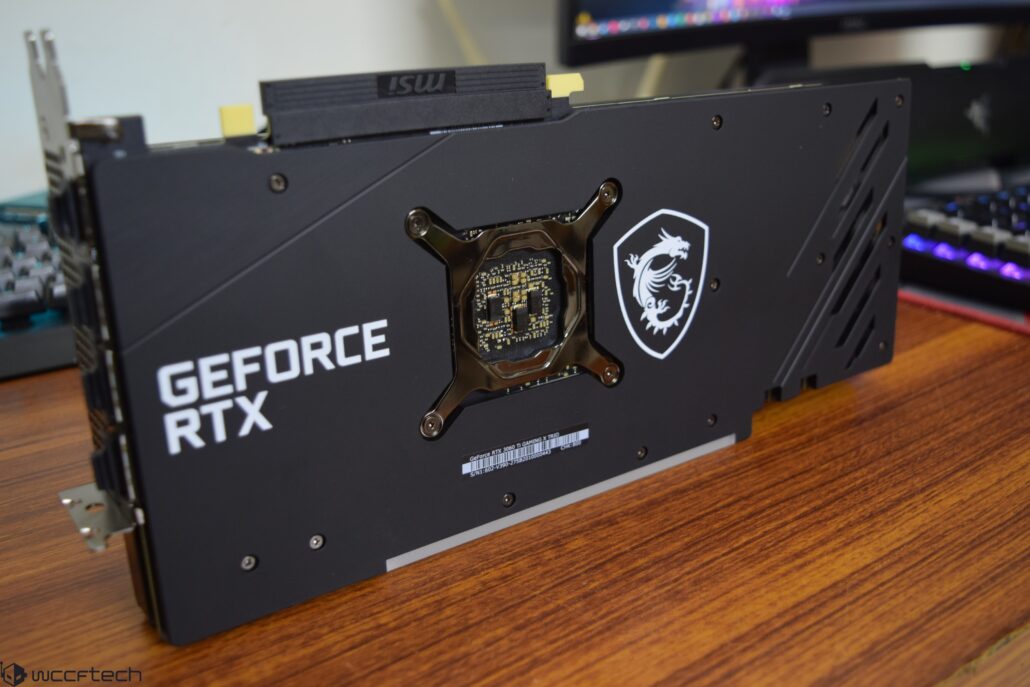 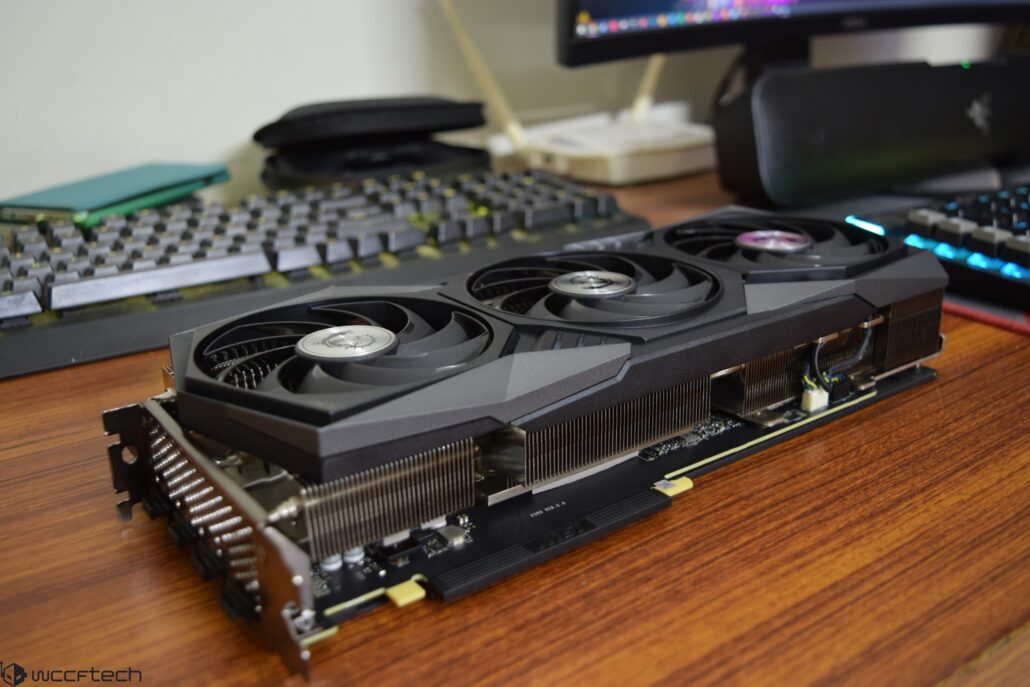 The large fin stack runs all the way from the front and to the back of the PCB and is so thick that you can barely see through it. It also comes with the wave-curved 2.0 fin stack design which I want to shed some light on as it is a turn away from traditional fin design. 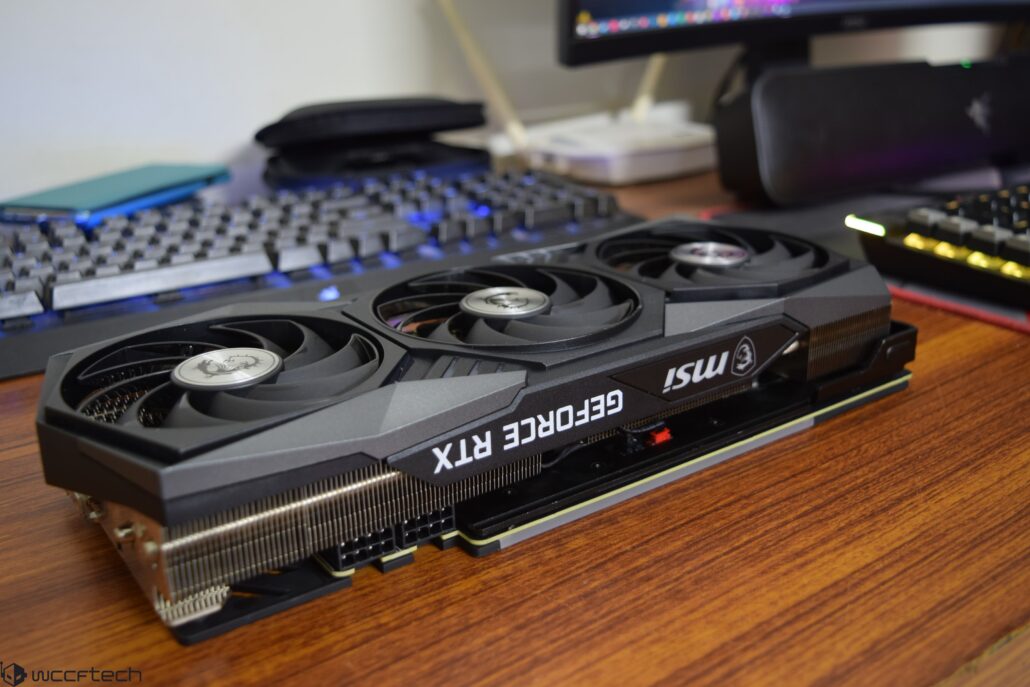 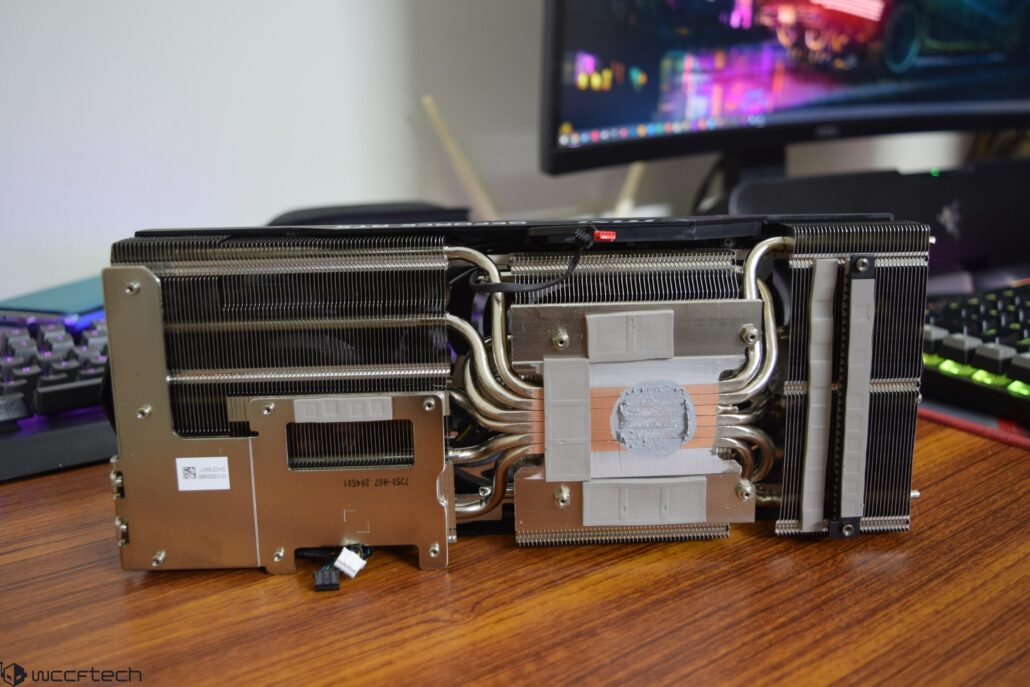 Talking about the heatsink, the massive block is comprised of six copper squared shaped heat pipes with a more concentrated design to transfer heat from the copper base to the heatsink more effectively. The heat pipes make direct contact with the GPU which is different than the nickel-plated copper base featured on the higher-end models. 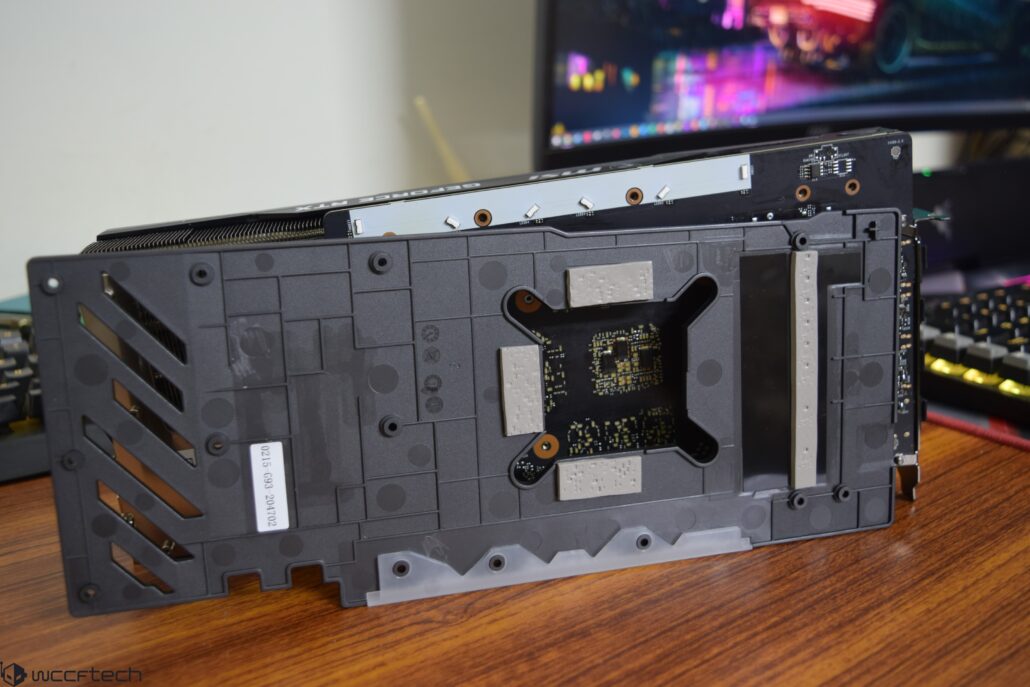 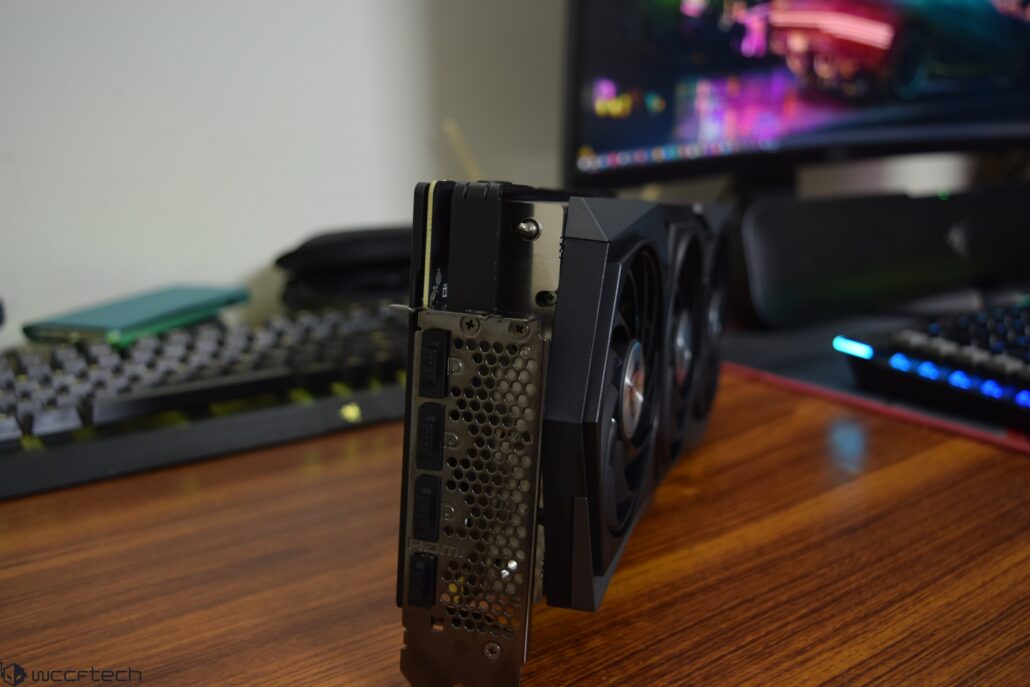 MSI makes use of a 6+2+2 phase PWM design that includes its Military Class components such as Hi-C Caps, Super Ferrite Chokes, and Japanese Solid Caps. 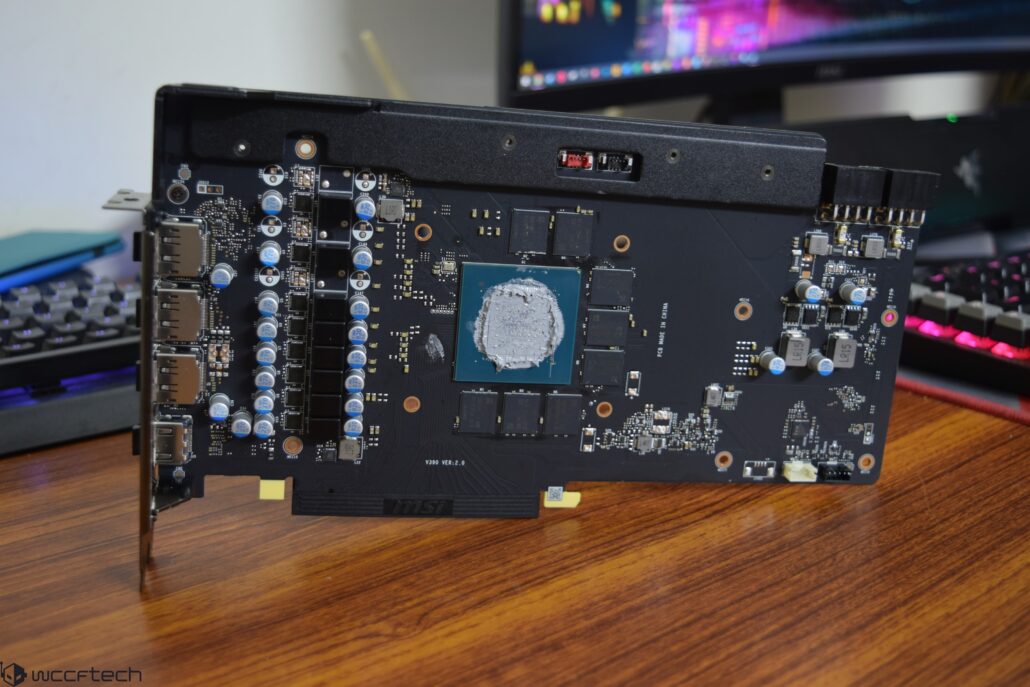 The card also uses the GDDR6 memory from Micron that operates at 14 Gbps alongside a 256-bit wide memory interface.

The MSI GeForce RTX 3060 Ti Gaming X Trio is more power-hungry than the reference graphics card as showcased by its custom design. Being so, it uses a very power-intensive connector configuration which comprises dual 8 pin connectors. The card is rated at a TDP of 200W officially by MSI. 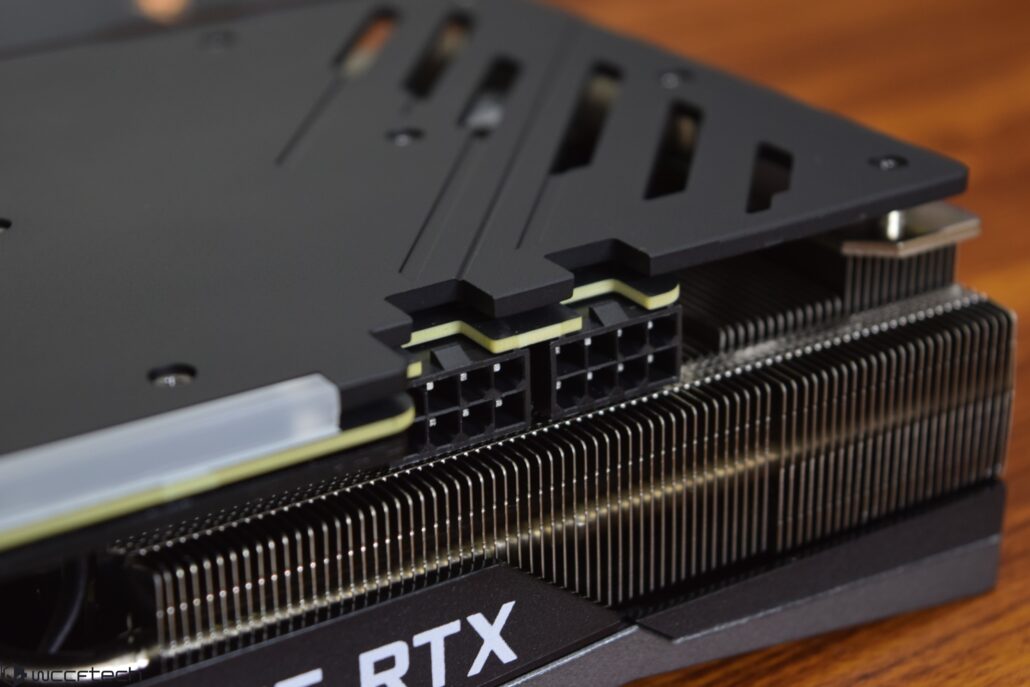