The Gundam Breaker series took quite a long time to get released in the West, despite the huge popularity of the Gundam franchise, but it now finally made it in North America and Europe with New Gundam Breaker. New Gundam Breaker is a "new" entry in the series in more ways than one, as it shakes up the series' formula by introducing a variety of new features. While many of the new features are quite interesting on paper, the execution is definitely mediocre, with both gameplay and technical issues damaging the experience.

New Gundam Breaker is focused, like previous entries in the series, on Gunpla. For those not in the know, Gunpla stands for Gundam Plastic Model, which are model kits depicting vehicles and characters from the Gundam universe. It's an incredibly engaging, but also costly hobby. With New Gundam Breaker, however, it will be possible to put together a huge number of Gunpla and customize them in a very deep and fun way without having to spend real money, outside of the game's cost. 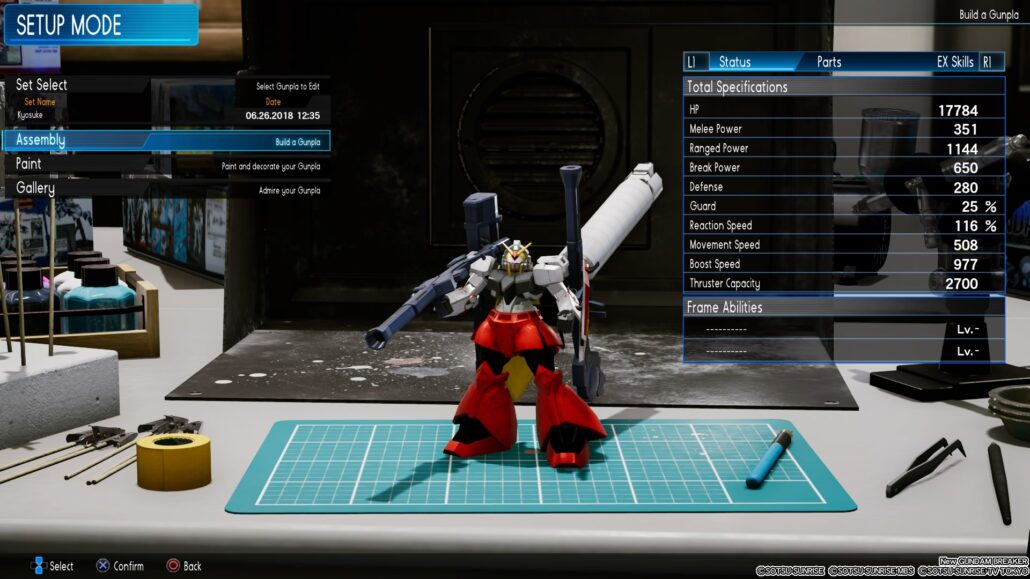 The game's main campaign is also focused on Gunpla building and battling. Main character Kyosuke, who can be renamed at the beginning of the story, gets admitted into the Private Gundam Breaker Academy, a place where only the best Gunpla builders are accepted. Right after joining the academy, Kyosuke will be sucked in a never-ending loop of Gunpla building and battling, while deepening his relationship with a variety of characters, who are mostly girls.

New Gundam Breaker's story mode has some real potential, but sadly the developer decided to take an easy path, essentially making it a romantic visual novel. Everything surrounding Gunpla takes a backseat to the development of the relationship between Kyosuke and the academy girls like Yui, Iori and Ryouko, with players only having the choice of which girls to deepen their relationship with, a choice that becomes available only when certain milestones are reached, such as getting a certain number of parts and so on. It's a shame because the story could have given some interesting insights into real Gunpla building or even move toward something a bit wackier. 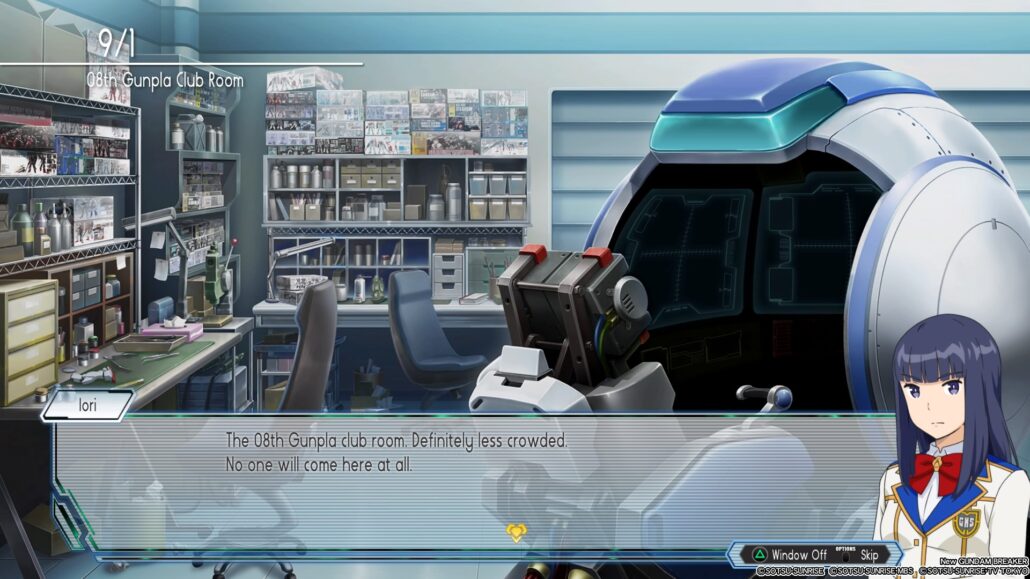 Things don't get much better in the actual gameplay. Each story chapter comes with a Gunpla battle, which is held, through virtual reality, in a variety of locations. Aside from a few missions, most are a 3 versus 3 battle where the two teams must complete quests to obtain points. The team with the most points after the main quest has been completed wins the match. While good on paper, there are quite a few issues with this approach.

The 3 versus 3 battles are incredibly chaotic, as Gunpla belonging to the Neutral Force will also join the fray. The hack-and-slash nature of the battle system makes everything fun in the first few matches, but things become a bit more frustrating later on since it becomes hard to understand what's going on during a skirmish involving a dozen Gunpla. Matches also tend to become repetitive after the first few, since there isn't a huge variety of quests: during each match, players will get to open containers, search for the hidden golden container, defeat a set number of Neutral Forces Gunpla, recover special parts, and defeat specific enemies. Things are made worse by the sluggish controls, performance issues when too many Gunpla are on screen, and by some weird design decisions, chief among them the leveling up mechanics. At the start of each match, all Gunpla start at level 1 and they can get experience by opening containers and defeat enemies. Leveling up not only increases stats but also unlocks skills tied to the Gunpla parts. The main issue is that Gunpla level is reset each mission, forcing players to do some early match grinding to be able to stand a chance against more powerful models. 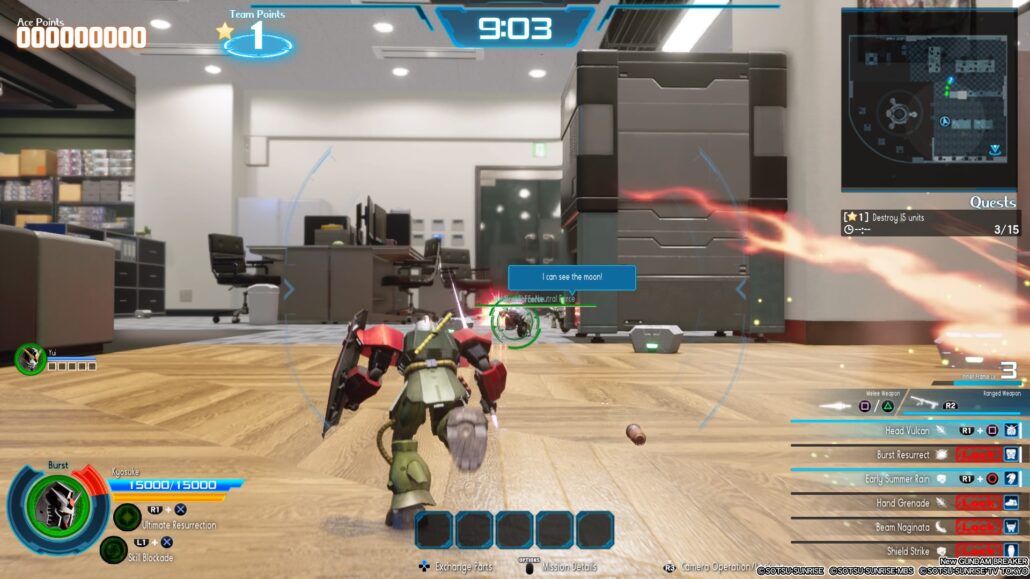 With repetition and all these other issues, the only thing truly salvages the whole experience, the huge amount of Gunpla included in the game and the vast customization possibilities. At the beginning of the game, players will control a rather standard Gundam Gunpla, but soon enough, they will be able to collect parts that can be used to build Gunpla during missions by physically removing them from enemies. Customization possibilities are truly huge, starting from the different frame types, which offer different skills as well as balanced performance, improved speed, improved melee or ranged attack and so on. Each Gunpla part, which includes Melee Weapon, Ranged Weapon, Head, Body, Arms, Legs, Backpack, and Shield, all come with unique skills which can turn the tide of battle and bring a variety of enhancements. Interestingly enough, parts recovered during a match can be equipped right away, adding an interesting level of depth and strategy.

Furthering customization are Builder Parts, which grant enhancements at a price, such as improved Melee attacks at the price of reduced Ranged attacks power and so on. All parts can also be colored individually, making New Gundam Breaker the one and only true Gunpla builder simulator ever released in the West. Sadly, it may be hard to get to build some of the most powerful Gunpla, as their parts are rare to find, and purchasing them from the in-game shop requires a huge amount of money.

New Gundam Breaker also comes with an online mode, which definitely helps. While the basic match structure is no different from the one seen in the story mode, the human factor adds a little bit of variety which makes things slightly less tedious, especially if you're grinding money to buy parts. The online mode also works nicely, with very few issues even when playing with players who don't have the best internet connection around. 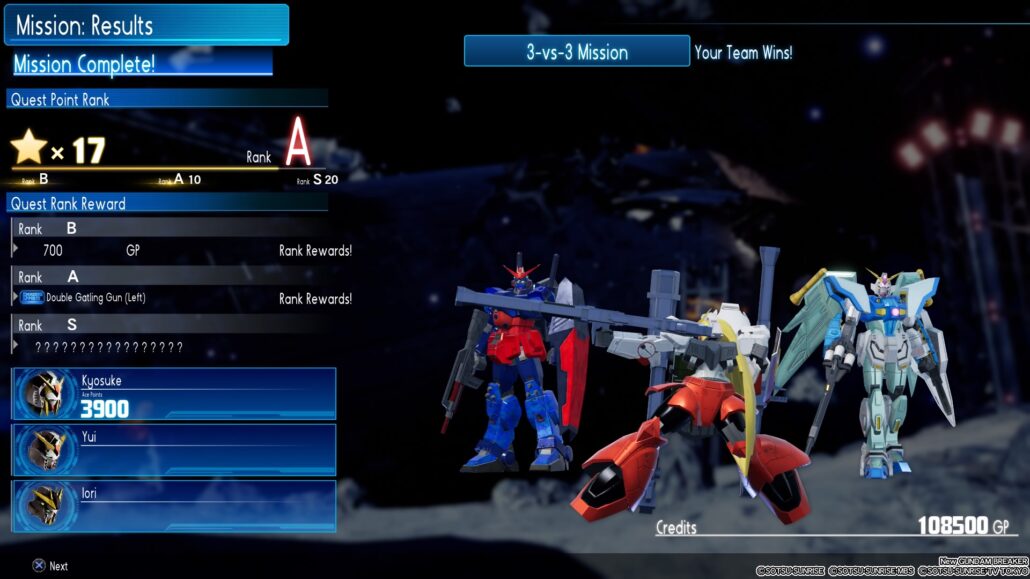 New Gundam Breaker's presentation is definitely of good quality, with Gunpla models being extremely detailed. Maps also look good, and so do the visual novel segments. The main issue, as highlighted earlier, is the performance, which is extremely uneven. Things are smooth with few Gunpla on the field, but things become terrible with multiple ones, with frame rate dropping noticeable and make all the action feel extremely sluggish.

Gundam Breaker finally arrived in the West, but it did so with, probably, the worst entry in the series so far. With a boring story mode, low mission variety, and performance issues, Gunpla building and customization is the only redeeming feature. Gundam fans will probably love New Gundam Breaker thanks to this, but everyone else would do better in trying the game before purchasing: it's not a terribly bad title, but the negatives outweigh the positives considerably.

The Gundam Breaker series finally hit the West, but it couldn't have done it in a worse way. New Gundam Breaker is not a bad game at all, but the many issues, such as low mission variety, performance issue, and mediocre story mode, outweigh its best features, mainly the huge amount of Gunpla models and the vast customization possibilities that come with it.

Gundam Versus Review – Gun-Damn, This Isn’t What I Hoped For