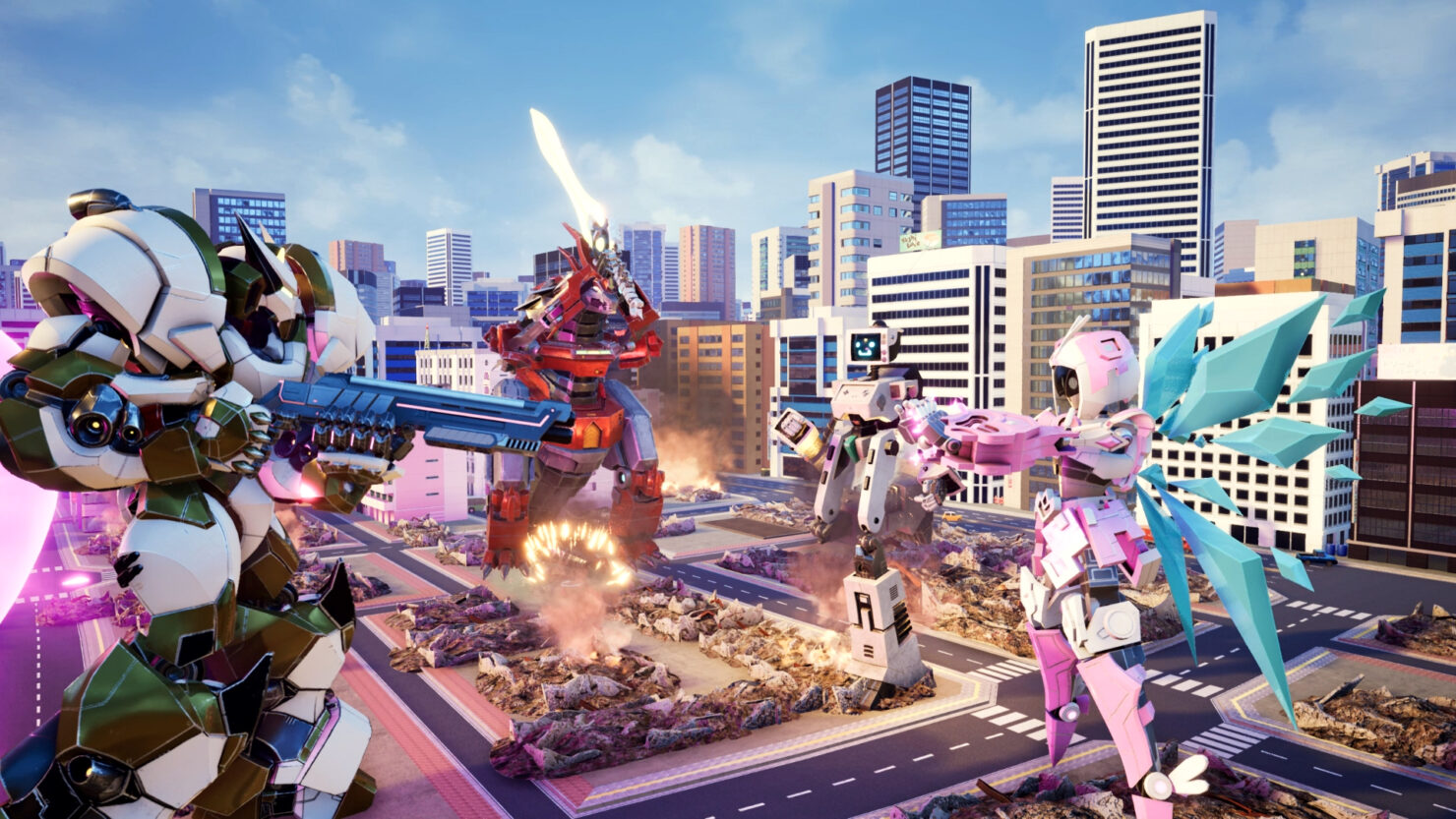 There have been a lot of mech games though frankly, I would argue that none of them have quite done the genre justice. The idea of doing battle with robots the size of skyscrapers is just, well, wonderful. And it should feel as visceral and brutal as it looks. Buildings toppling under their weight, the ground shaking under their footsteps, and giant laser weaponry, of course, to slice things clean in half.

Override sees the issues that other mech games have had and sets out to do something slightly different. A 3D arena as a battlefield, lock on mechanics, items to pick up and some basic combos. Well, not too different so far, but it certainly feels different when you have the controller in your own hands.

Taking a few cues from mech games of the past and the fighting game genre, what we have here is a unique fusion of Super Smash Bros.' party game philosophy, and Gundam's giant, brutal, monolithic mechanical creations. Depending on the game mode, you can take on up to three other mechs in a free for all environment, pick up items, and, well, smash their health bar into nothing.

It's as straightforward as game concepts get, but luckily it's executed incredibly well. In the Japan stage, tall buildings are placed around the players, and by the end of the match, you're left with ruins. Just running through the buildings causing destruction - not necessarily an aim of the game I may add - is needlessly satisfying. The Egypt stage, meanwhile, is a bit barren and - heh - deserted. 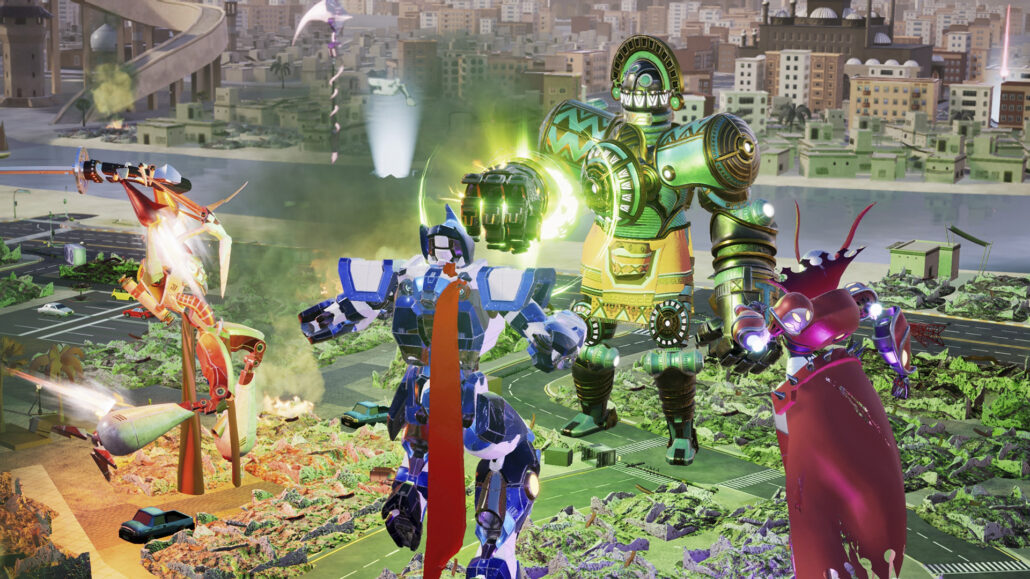 There were limited modes available in the preview build I played, which focused on online multiplayer. This is clearly a game meant to be played with friends, whether or not you actually have any nearby. And with friends, it becomes a fun, frantic experience, with players racing to get items that will help them compete with one another.

Interestingly you control individual limbs of your mech, being able to punch with the controller's shoulder buttons and unleash heavier attacks with the triggers - these attacks can be charged too to deal more damage. Of course, grabbing a weapon like a giant grenade launcher, sword or even frying pan will help you do more and more damage.

Those attacks are useless on their own though. You'll also have to jump and dodge out of the way. This mech game doesn't let you spend much time in the air, sensibly aiming for a weightier and more satisfying grounded combat system.

There's a lot of fun to be had and to put it simply the graphics look perfectly serviceable - not the most detailed, but with a strong art direction and lighting that shines off the mech armour and makes them come to life. 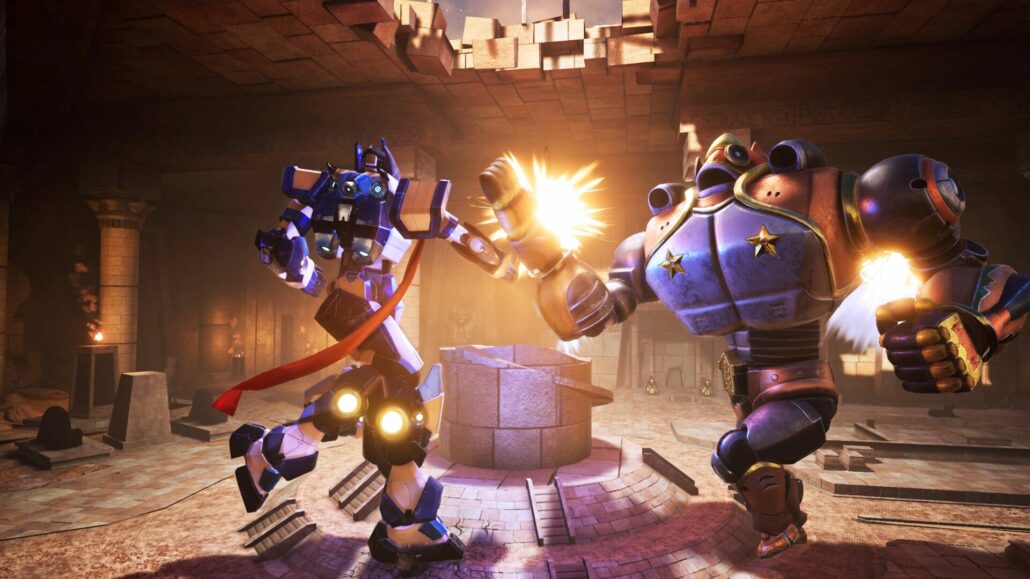 With a small and varied cast, it feels as if Override is going for a fighting game style of gameplay, with players picking characters that complement their strategies, as opposed to a mech game like, say, Gundam Versus, which gave you dozens of options which all played almost exactly the same.

Override very well could be the mech game I've always wanted, though the combat would need to be sharpened up. As it stood, battles always felt like a case of moving in, striking a few hits of a combo, and moving away quickly or blocking to avoid damage. Though of course in time players will understand the fighters better, and hopefully, things will become very interesting indeed.

Override is due on December 4th for PC, PlayStation 4 and Xbox One, priced at $40. Look forward to our full review soon.