NEO: The World Ends With You

The World Ends With You took the world of Japanese role-playing games by storm back in 2007 when it launched on Nintendo DS. Not only the game featured an incredibly stylish design, interesting setting, and charming characters, but it also took advantage of the console's unique features, like the dual screens and touch screen controls, in some exciting ways. The original game's mobile and Nintendo Switch ports had to alter some of the mechanics to make up for the lack of a second screen. While this did impact the experience, it did not lessen the game in any significant way.

For years, fans of the series who wanted to experience this incredible rendition of Shibuya had no choice but to replay the original. Despite quirky JRPGs becoming increasingly popular worldwide over the years, Square Enix did not seem particularly interested in developing a sequel, despite introducing new story content in the mobile and Switch ports that heavily hinted at future story developments. 14 years has been a very, very long wait, but the time has finally come for the series to stand back into the spotlight with NEO: The World Ends With You, a game that not only manages to be as good as its predecessor in pretty much every area but also manages to surpass it at times thanks to an even better cast of characters, great story pacing with much higher stakes involved and a masterful adaptation of the original's formula to traditional controls.

NEO: The World Ends With You follows a brand new cast of characters as they take part in the Reapers' Game, a mysterious game that can only be accessed when someone died in the real world. Following a short introduction of the new main characters Rindo Kanade and Tosai "Fret" Furesawa, the two friends find themselves transported into the UG, the plane where the Game takes place. Not knowing how they did get thrown into this dangerous game, Rindo and Fret make the acquaintance of new reapers like Shoka Sakurane and the current Game Master Shiba, slowly coming to understand the nature of the game, why they are forced to play it, and the rewards they can obtain by winning.

During the course of the adventure, Rindo and Fret will also be joined by other players, like the returning Reaper turned player Sho Minamimoto, and the college student Nagi. The four companions who make up the Wicked Twister team also meet the members of other teams, which makes the game feel like a much livelier affair compared to the original, which featured only minimal interactions between Neku and his friends and other players.

Despite being a direct sequel, NEO: The World Ends With You tries its very best to feel as welcoming as possible to newcomers. For the first week, references to the events of the original are kept to a minimum, and players learn more about the game alongside Rindo and his friends. Surprisingly enough, having to basically introduce all the lore again did not lead to pacing issues at all, as the story manages to stay interesting even as Rindo and his companions learn the ins and outs of the Reapers' Game. Even as the story progresses, the pacing stays great with the right amount of mystery to keep players hungering for more, creating an amazing build-up for late-game events that definitely do not disappoint. It's difficult to say why they do not without spoiling anything, but I am definitely happy at how things turned out as a long-time fan of the original. Some twists are definitely wild, but they do not reach the same level of craziness as in the Kingdom Hearts series.

If the story manages to be so entertaining, it's also thanks to the great characters. Rindo, Fret, and Nagi do get the most character development of all. All their time together leads to hilarious interactions and recurring jokes that, surprisingly enough, do not get tiring at all, thanks to the amazing English voice acting that is pretty much always spot on. This doesn't mean that any other party member or other story characters don't get their time in the spotlight, the contrary actually: as already mentioned, this time around, we get to see way more of the other teams involved in the game, which makes the Reaper Game feel more like a proper battle royale scenario than the original. The Reapers are also as over the top as they were in the original, and their quirks make them extremely personable and instantly recognizable. If you have loved Neku, Beat, Shiki, and Joshua in the original, you will love the new characters just as much.

Since the original The World Ends With You used touch screen controls, it's no surprise that NEO: The World Ends With You had to tweak the gameplay so that it could work with traditional controls. While the original's novelty, especially of the DS release, has obviously been lost, the developer has done a tremendous job porting over the entire experience and making it even more engaging to boot.

In NEO: The World Ends With You, players explore the streets of Shibuya as they attempt to win the Reapers' Game by completing missions and deleting Noise, weird beings that only exist in the UG where the Game takes places. Missions are extremely varied, ranging from erasing a specific target, winning a Scramble Slam where players need to conquer different areas by defeating special types of Noise or by defeating other teams, solving some simple riddles, and more. Mission variety is possibly even wider than that of the original, also thanks to some new powers like Remind and Rewind, making the experience always feel fresh, although you will end up spending most of the time in combat. Not that this is a huge problem, as the combat system is definitely among the game's highlights.

No longer powered by touch screen controls, the NEO: The World Ends With You combat system, an action combat system where players unleash the special powers of Pins to slash at the enemies, launch them in the air, hit them from afar with ranged attacks and so on, feels like the best possible adaptation of the original. The different powers are now tied to the controller buttons, allowing players to time their hits with the Beatdrop gauge to increase their Sync value that lets them unleash a powerful special attack once it gets to 100%. Outside of the controls, and the many new Psych powers, the differences with the original are minimal, as in the new game, all party members still share the same HP gauge, just to make an example. Thankfully, the AI is competent enough in avoiding damage when a character is not directly controlled by the player.

The same amount of the original game's combat customization options are also available in NEO: The World Ends With You. Shortly after the first few combat encounters, it becomes possible to not only change the difficulty level on the fly, which alters which Pins Noise drop upon defeat but also the party's level: lowering the level increases Drop Rates, adding an extremely engaging risk-reward system that also prevents the game from becoming too easy too soon. As if this weren't enough, it is also possible to chain multiple combat encounters for increased risk and much higher Drop Rates. Not that there is any real risk of the game becoming too easy, as some boss battles, which are all cleverly designed, continue to be challenging at Hard difficulty and above even without lowering the party's level. NEO: The World Ends With You can truly be as difficult or as easy as the player wishes, and all the customization options are incredibly welcome.

What hasn't changed a whole lot over the original is the character growth system. Leveling up only increases Max HP, and to increase stats, characters will need to eat food available in the many establishments found in Shibuya. Eating food is also the only way to increase the Style stat, which regulates if any given character can use the ability contained in Threads, clothes, and accessories used as gear. In NEO: The World Ends With You, every character can equip all Thread types, but some abilities are only available for certain characters, giving players some guidance on which character should equip a certain item. Other abilities can also be learned via the Social Network mechanics, a sort of skill tree that requires Rindo and his friend to get acquainted with different characters in Shibuya, solve their issues to obtain the Friendship Points that can be used to unlock additional abilities, including new difficulty levels.

The original The World Ends With You employed a gorgeous 2D visual style that made the character and location design shine, especially in the mobile and Nintendo Switch ports, but sadly NEO: The World Ends With You is a little hit and miss in this regard. Shibuya still manages to look great, but the characters are definitely a mixed bag. The combat models look great, especially some of the Noise, but the ones used in the field are considerably less detailed. It's clearly a stylistic choice here, given how most unimportant NPCs lack detail even in the visual novel style cutscenes, but it will still put some players off. The vast majority of the story is also told via this type of sequence, which is not surprising for the series, but thankfully they are extremely varied, and they work well in highlighting the current happenings and how characters are reacting to them. Speaking about performance, the PlayStation 4 version of the game runs smoothly most of the time, even when there's a lot going on during combat.

One area regarding the presentation where NEO: The World Ends With You fully delivers is the soundtrack, which is possibly even better than the original. Many of the original's tracks are back with new arrangements that sound great, like Hajimari Owari, and many of the new tunes are incredibly catchy and do an amazing job in improving the atmosphere.

The wait for NEO: The World Ends With You has been very long, but it's been definitely worth it. With an amazingly stylish setting, charming characters, great action combat, tons of content, and a seamless transition from touch screen controls to traditional ones, both fans of the original and newcomers will love every second of the new edition of the Reapers' Game. Sure, some of the novelty has been lost on the way, but not altering most of what made The World Ends With You so unique was definitely the right call. 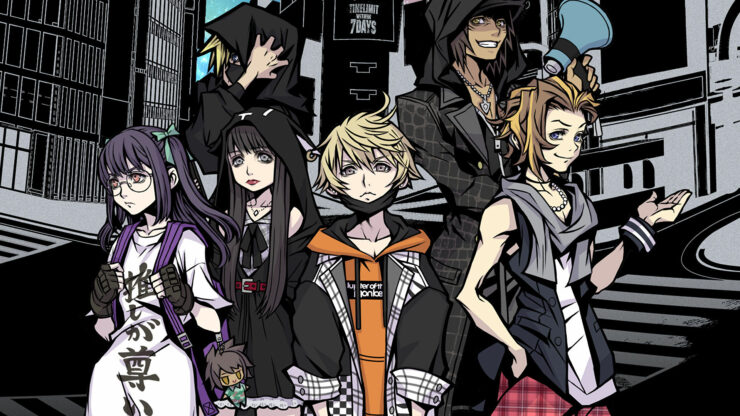 9.3
Wccftech Rating
NEO: The World Ends With You

NEO: The World Ends With You is the excellent sequel of one of the most unique JRPG ever released, featuring a stylish setting, charming characters, engaging story, masterfully crafted action combat, and tons of content that are on par (if not better) with the original. While some of the novelty is lost, as the game does not innovate the series' mechanics in any significant way, NEO: The World Ends With You is truly the sequel that all fans of the franchise were waiting for.

Final Fantasy XVI Next Trailer Will Be out Next Month; Game Is a Roller Coaster of Story and Action