Will the real version of NBA 2K21 please stand up? The “current-gen” PC, Xbox One, and PS4 versions of NBA 2K21 came out back in September, and left me a bit flat, but the game’s “built from the ground up” PS5 and Xbox Series X/S version has since launched. This next-gen iteration is more than a simple visual polishing, it also revamps gameplay and adds a variety of new features and modes. It’s enough to warrant a new review, and so, here we are!

Of course, just because the next-gen version of NBA 2K21 is different, doesn’t necessarily mean it’s better. Traditionally, sports franchises have started off on shaky footing when jumping to new consoles. So, does the PS5 and Xbox Series X/S version of NBA 2K21 continue the franchise’s winning dynasty or will a rebuilding phase be required? Lace ‘em up, it’s time to hit the court again… 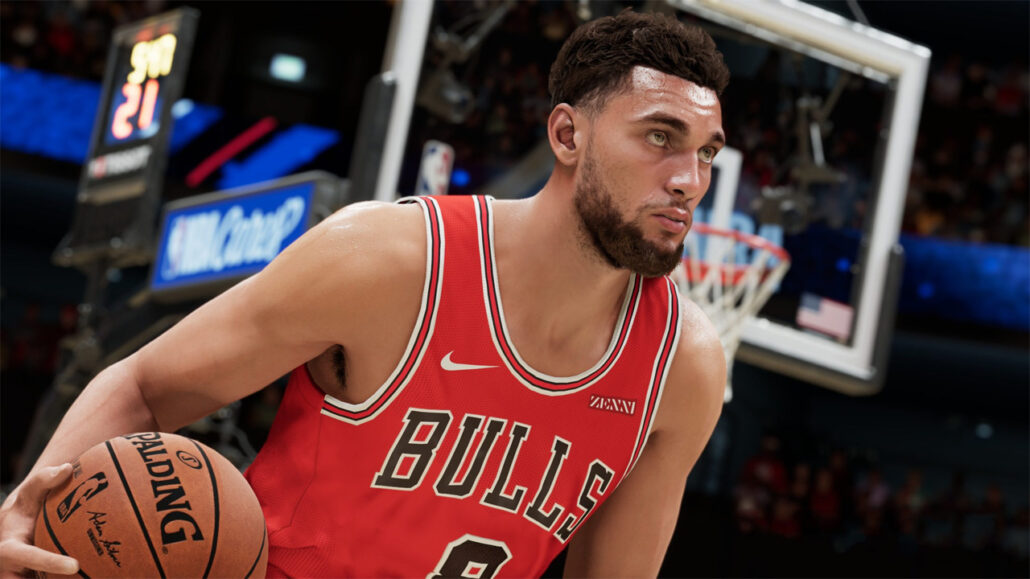 Note: Some aspects of the current and next-gen versions of NBA 2K21 are more-or-less identical, so I’m not going to go into great detail about them here. If you want to know more about, say, the game’s MyCareer story campaign or MyTeam mode, you can check out my original current-gen NBA 2K21 review here.

The NBA 2K series hasn’t retooled its core gameplay in a major way in some time. Sure, each new game rebalances and tweaks certain mechanics, but the changes are usually very evolutionary. Well, the next-gen version of NBA 2K21 changes that. The game doesn’t just look better, it feels totally different. NBA 2K21 next-gen completely revamps the series’ animation and movement system, and it’s surprising just how big a change it is. NBA 2K developer Visual Concepts has chipped away at the problem for years, but the fact is, the series’ gameplay has always had a slightly stilted, canned feel. That is now gone. NBA feels refreshingly nimble, fluid, and authentic on the new consoles.

Players plant their feet realistically as they maneuver, ball handlers and defenders body up and battle in the paint in a believable way, and dribbling and passing feels more predictable and in the player’s control. I particularly like the new “lead pass” mechanic – pass to one of your players using the triangle/Y button, and they’ll start making a break to the basket before they even catch it. This may all sound like minor stuff, but it all adds up to a much more satisfying experience. The next-gen NBA 2K21 moves realistically, but has the pick-up-and-play fluidity of an old-school arcade b-ball game. 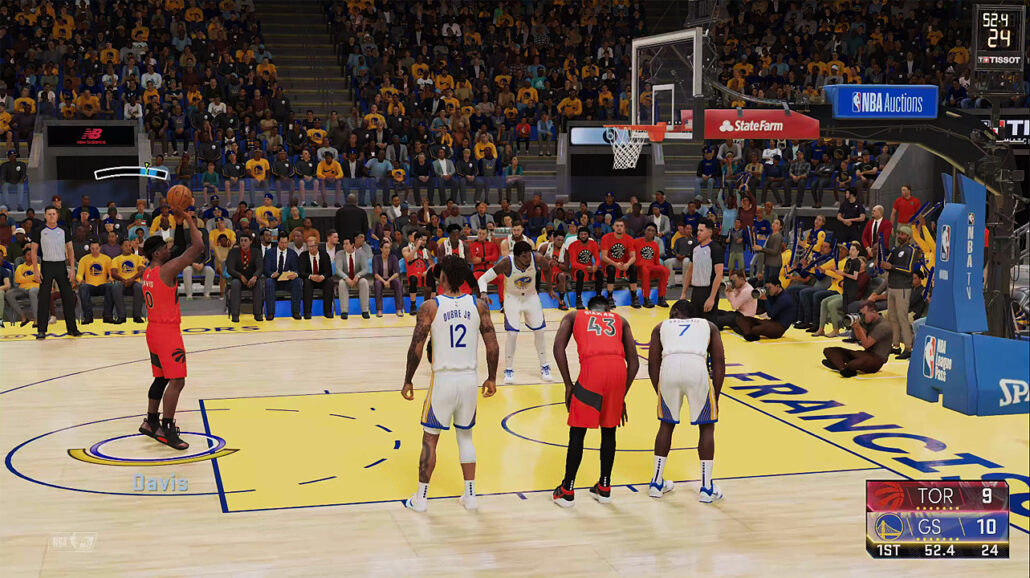 NBA 2K21 next-gen also directly addresses some of the issues in the current-gen version of the game. Shooting was stingy as hell on the PS4/Xbox One, but thankfully, sinking baskets is now much less of a pain. The finicky Pro-Stick shooting does return, but now you can use traditional timing-based shooting without any penalty. Admittedly, this version of NBA 2K21 does feel easier than most recent entries in the franchise, which some hardened vets may grumble about, but I wasn’t bothered. I don’t really play these games to grind up the perfect MyPlayer, so as long as the sport is presented accurately, which is undeniably is, I’m not going to complain that wins are coming a bit easier than they used to. At their core, sports games are supposed to be power fantasies, right?

NBA 2K21’s updated action is further bolstered by a fairly impressive visual makeover. Arenas look fantastic, featuring much livelier, more believable crowds (Remember those?) and players look incredible, with every hair, wrinkle, and bead of sweat captured in minute detail. Well, at least the big stars look incredible. As has always been the case 2K Games, the headliners like Steph Curry, Klay Thompson, and LeBron James look amazing, but the bench warmers? Not as much. Some look like they’ve been directly copy-and-pasted from current gen. HDR is also applied with a bit of a heavy hand, giving NBA 2K21 a slightly harsh appearance that doesn’t necessarily match the look of real basketball broadcasts. Don’t get me wrong, this is a very pretty basketball game, but perhaps temper your expectations just a touch. 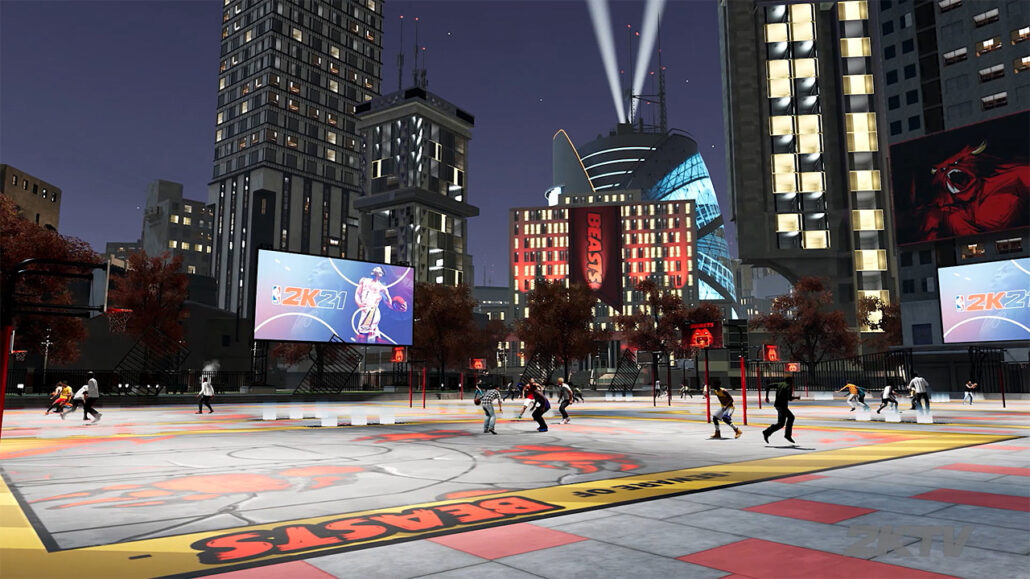 As usual, NBA 2K21 is roughly split into three parts – MyCareer, MyTeam, and the MyGM/MyLeague franchise modes. MyCareer is carbon copied from the current-gen games, featuring the same cinematic prologue, albeit with much-improved presentation. You once again step into the role of “Junior,” a gifted baller who struggles to live up the mixed legacy of his father, a legendary college player who somehow never made it the NBA. We’ve seen this “bright-eyed up-and-comer makes it the NBA” story before, but this is a solid take on the formula. If you already played through the prologue on PS4 or Xbox One, it’s not really worth tackling again, but you can skip directly to grinding through the NBA season if you want.

Visual Concept’s major focus is on the latest version of their social hub, which started as “My Neighborhood” back in NBA 2K18 and was reinvented as the “2K Beach” for the current-gen version of 2K21. On next-gen consoles, the hub has been expanded into “The City,” a surprisingly-large (it will take you at least a few minutes to run across) basketball-focused metropolis. The City is divided into neighborhoods with players being able to join one of four different affiliations, and NPCs now walk the streets handing out simple RPG-like quests. These additions are nice, but ultimately, The City quickly starts to feel a bit sterile and empty, with most of the new space being devoted to, you guessed it, cosmetic-shelling shops. Worse, I’ve noticed some issues with performance while playing in The City, although that has improved with updates. If you’re one of those players who spends all their time playing Rec or Pro-Am games in the hub, The City will likely be a welcome update (once all the issues are worked out), but if you’ve always ignored 2K’s little microtransaction-pushing towns, you can continue to do so. 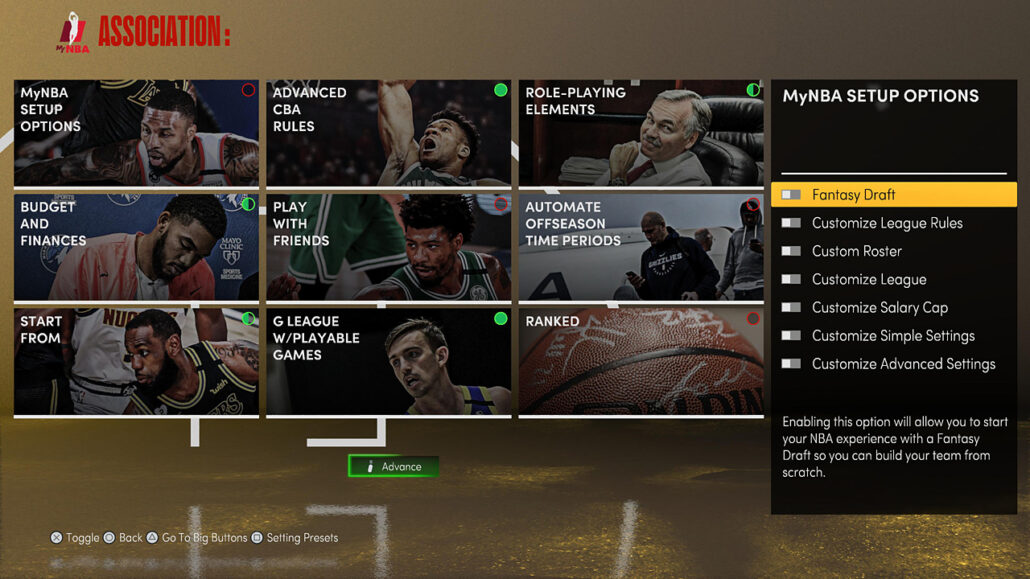 MyGM and MyLeague has long been one of the most neglected parts of the NBA 2K package, and that doesn’t really change here. The next-gen version of NBA 2K21 consolidates MyGM and MyLeague into a single franchise mode called MyNBA, which allows you to freely tinker with individual teams as well as the league as a whole. This is probably a smart move, and the amount of options for customizing your experience are impressive, but I can’t help but feel we’re getting away from what I personally want from a franchise mode, namely, more personality and storytelling. Yes, you can still turn on RPG elements as an option, but they’re just that, an option. It seems like Visual Concepts is giving up on the idea of MyGM as a structured challenge and turning franchise mode into more of a fantasy basketball tool. And hey, some may appreciate that, but it’s not really for me. At least women get in on the franchise mode fun this year with their own MyWNBA mode. The ladies don’t get quite as many options, but you can design your own female MyPlayer, guide her and her team through a season or playoffs, craft your own league, and more. It’s a nice start, which Visual Concepts hopefully builds on in future games. 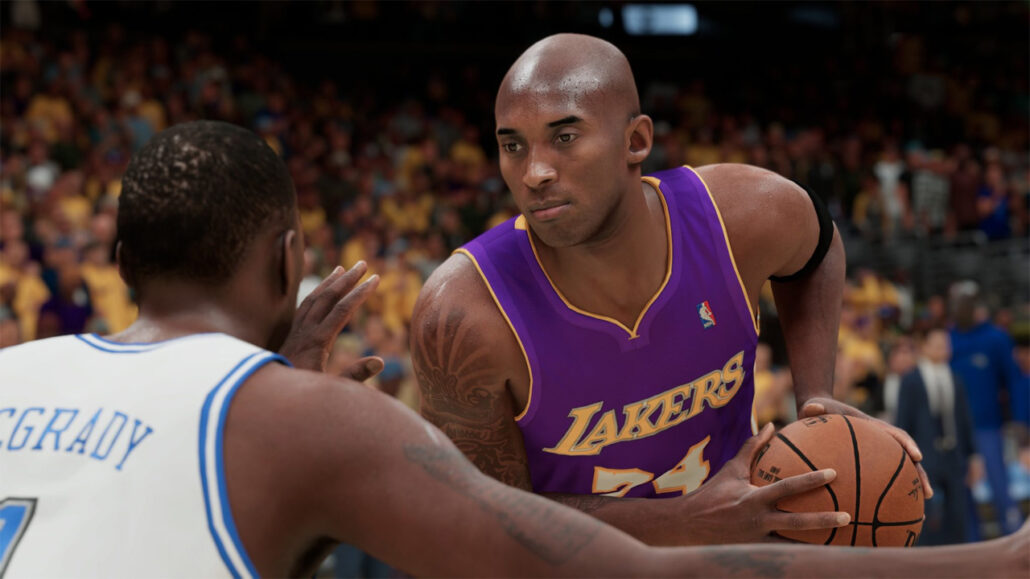 NBA 2K21’s Ultimate-Team-style MyTeam mode is directly carried over from current-gen consoles. In fact, it’s the only mode that allows for crossgen save transfers – yes, you’ll have to start your progress all over in every other mode. Thankfully, this year’s MyTeam retreats from the much-criticized casino theme of last year to a Fortnite-like seasonal structure, but of course, random card packs are still integral to the mode. Personally, I’m going to continue keeping my distance.

And that’s about all there is to say about NBA 2K21…er, for the second time. As you’d expect, there’s plenty of content to work through on next-gen consoles, although the game doesn’t really feel any bigger than past entries in the series. Whether that new $70 price tag is justified, is up to you.

This review was based on a PS5 copy of NBA 2K21 provided by publisher 2K Games. You can grab NBA 2K21 Mamba Forever Edition, which includes a next-gen upgrade, at a discount here.

NBA 2K21 makes a solid debut on next-gen consoles, but may fall short of some fans’ razzle dazzle expectations. The game looks impressive, if slightly uneven, and new animations make for silky-smooth on-court action, but a lack of unique, worthwhile content holds the overall package back. If you’ve been waiting for NBA 2K21 on PS5 and Xbox Series X, or bought the Mamba Forever Edition that comes with a free upgrade, this is certainly the best version to play. That said, if you don’t have access to the upgrade (or a PS5 or XSX for that matter) you don’t need to feel too bad about sticking to the G League this year.