NBA 2K17 Review – For Professionals Only

I feel I should start by saying that I am a relapsed, British, fair-weather fan. Despite a fondness for the sport, it's been years since I’ve played a basketball game, and NBA 2K17 is not very accessible to newcomers.

When I began, I jumped straight into the tutorial mode, hoping for a refresher course on how to play basketball other than dribbling and shooting. I instead found myself playing a quick match. Rather than moving through the tiresome basics, NBA 2017 assumes you understand the game, and want to pick up the controls. You do this by playing a game, with the prompts for the controls as they arise organically.

It's a very nice way of introducing fans of the sport to the game, but for those of us looking for a more comprehensive guide, it's a little daunting. With hints suggesting three different kinds of pass available, with no context of when each should be used means a lot of guess work for the uninitiated. For more reliable fans, I can only assume three types of pass is a good number. On top of that a lot of advanced controls are done using the ‘pro-stick’, the right thumb stick. Although cumbersome at first, this does allow for some dynamic game altering movements once you get more comfortable controlling it.

Moving on from the tutorial embarrassed by my lack of knowledge, but with a good sense of the controls I loaded up MyCareer. Typical of most sport games, it’s the mode that lets you build a player and grow them to the height of the game. What I didn’t expect was the amount of cutscenes that dilute a bit the core experience of playing basketball. There is a lot of dialogue, characters and genuine narrative that unnecessarily takes away from the experience, which is a little annoying especially at the beginning when everyone is just another avatar. In the later parts of the game, when your character has risen to prominence enough the cutscenes start involving some more familiar faces you can at least enjoy, such as Michael Jordan.

The meat of the game, like with any other sports franchise, is the matches. If you aren’t familiar with basketball tactics, this game will not hold your hand. What it will do, however, is excite and surprise you. While the initial breakdown of the gameplay feels simplified and repetitive, the nuance in the game, even if you don’t fully understand it makes you want to play more. 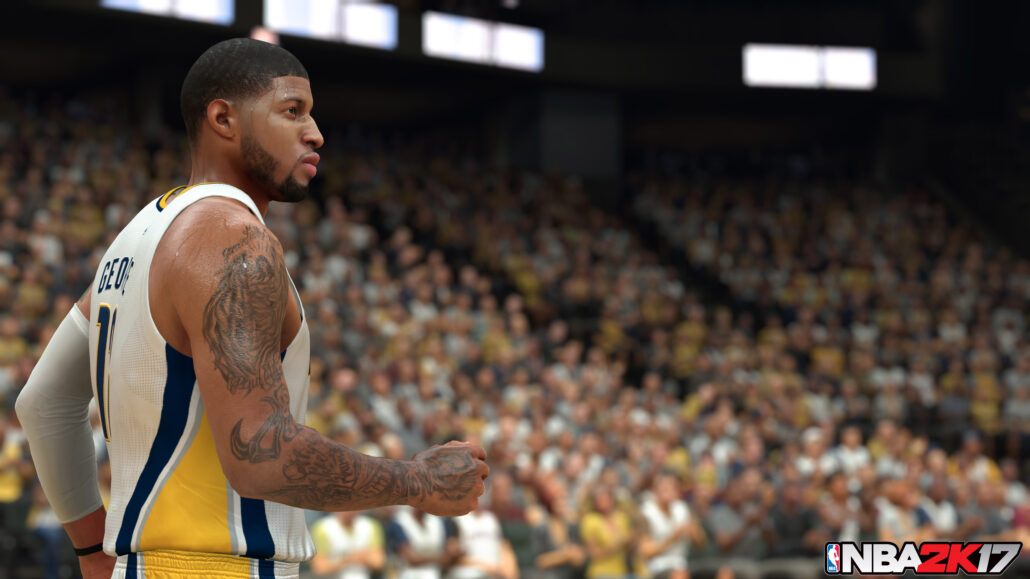 Essentially, the game is broken in attack and defense. You get roughly one shot before the other team snatch the ball and double back to shoot against you. You’ll rarely get the chance the steal the ball so it's all about playing strong at either end of the court. Shooting involves outflanking your opponents and finding a weakness to exploit. Defending on the other hand is the exact opposite, attempting to lock down your challengers and give them as little opportunity as possible to grab some points.

There is a lot you can do on either side, something the game will not overtly tell you, but lets you learn organically. There is a lot of fun to be had getting to grips with the different overlapping mechanics and finding interesting you ways to dominating the space.

NBA 2K17 is a game built for a fan of basketball that understands the principles already, and with its excellent graphics, adrenaline soaked soundtrack and remarkably in depth controls, fans of the series will greatly enjoy this outing onto the surprisingly squeaky court. For those like me, that can enjoy the sport without being neck deep in the characters, statistics, and matches, NBA offers a surprisingly reliable and engaging experience. Obviously it is much more fun with a friend you can experiment with and against, but there is something deeply satisfying in developing your own skills at the game. While I’m certain almost everyone knows the absolute basics of basketball, learning the necessary depth to compete is wonderfully exciting. A bit like Dark Souls, you’re left to indulge in the primal experiment. And when you begin to connect relevant strategies together, and compete online with some level of ability, NBA 2K17 can be more satisfying than a lot of other sports games can offer.

What's particularly impressive is the attention to detail that the developers have imbued the game with. For instance, the folks at Visual Concepts travelled 16K miles to record audio (like arena horns) from each NBA arena so that it was unique. The shoes have been all 3D scanned.

The folks at Visual Concepts clearly must love this sport. This all points to a level of passion that can be seen throughout the game. For those who are interested in more than just playing matches, MyGM and MyLeague game modes offer an incredibly deep chance to do so, including participation in activities like the draft.

NBA 2K17 is the greatest basketball game ever made, bar none. That said, it's not really accessible at first for newcomers, so keep that in mind; if you intend to venture into the MyCareer mode, be prepared for lots of unnecessary cutscenes, too.