I'll be honest with you. I've never cared that much about ninjas. I've always been on the pirate side of the argument. And as time has gone on, I feel pretty vindicated of my affiliations, because, well, stealth assassins don't actually make for the best shonen protagonists, as it turns out.

But that's why Naruto is out, and Boruto is in, who is just Naruto's borderline identical son. I guess it's like a series reboot for people that are desperate to hold onto the franchise. If you are a Naruto fan, then you're probably pleased that there's more to enjoy. Probably. But sadly, Boruto doesn't quite carry the same gravitas as his dad. Which is why Papa Ninja still has his name on the front of the box of Naruto to Boruto: Shinobi Striker.

But complaints about the awful new protagonist aside, what can fans, new and old, of the series expect from the latest game? Well actually, if you've come over from the Ultimate Ninja Storm series, you'll find that this is a very different kind of game. In fact, it feels like a massive departure from what we're used to from the blonde ninja and his pals, but that serves to make it far more interesting.

What we have in Naruto to Boruto, is actually a primarily online multiplayer experience. That's right, instead of fighting through classic Naruto battles and moments, we're going to some entirely new territory, and you can even create your own new ninja character to battle others and complete missions.

This might have started sounding familiar to anime game fans. Yeah, Shinobi Striker is totally a Naruto version of Dragon Ball Xenoverse, with potentially less money invested in the venture. It takes the template Xenoverse laid out - character creation, customisation, learning character's signature moves through training, putting it all together to take on others online - and puts a Naruto coat of paint on it. And to be perfectly honest - it works really quite well.

I've already expressed my disappointment in Boruto, but luckily with this character creator, you never need to see or talk to the wee brat unless you want to. This might be a Naruto game, but the adventure you end up having feels distinctly like one of your own. The character you create, the moves you choose to learn and use, it all feels very much like something of your own creation.

You don't play through the Naruto story, either. Yep, whereas many Naruto games will take you through the entirety of the manga story, here, it's just not here. There are missions and quests to take on of course, but these take place in a "VR Arena" where you can play solo, or in co-op with others, and take down waves of enemies, collect items, beat bosses, and so on.

The missions sometimes have a nice cutscene (which always excludes your character) at the beginning, but to be honest, they are there for those who don't want to play online to progress through the game and level up. They feel like a token addition, not a primary game mode, something that had to be here otherwise certain players would feel hard done by.

So the missions are a bit rubbish, then. Sorry, if you want to play this Naruto game like a solo experience, it's a mind-numbing process. Just awful levels, with terrible goals that rarely feel fun. It feels like a test of my patience; how many missions can I play through before getting sick of playing the game? Luckily, this isn't really supposed to be a single player game. This is an online multiplayer game first and foremost.

It's strange, as I wouldn't have pegged the Naruto series for being one where online multiplayer would fit well, but it really does in Shinobi Striker. The game focuses on game types such as capture the flag and defending bases, which the mobile ninjas feel well suited to. You can quickly run and jump around stages, swinging to central buildings, and of course, knocking other players to their doom. There's plenty of bottomless pits, and while ninjas can run on walls, they sure can't fly.

You can imagine how the multiplayer modes themselves play out, but it's the combat that's actually most fun and interesting in Shinobi Striker. You get special ninjutsu moves on L1 and R1, a substitution on L2, and a long jump on R2. You get basic combos on Square and Triangle, with ranged kunais on Circle. It's a simple set up, not alien to anyone who's ever really played an action game before, let alone an anime game, but it works well enough in a multiplayer setting here that I can't argue with it.

Though it's not amazing, by any means. Online multiplayer can definitely be fun one on one, or when things are going your way, or if you've managed to avoid a hunting team deftly - but there's also a good chance you'll end up finding yourself against two or three enemies, and suddenly, the game sucks.

Just like For Honor, Dissidia Final Fantasy NT and many other melee multiplayer games before those, being a single player against multiple ruins the game. Without being locked on to an enemy in Naruto, you will lose them regularly thanks to a bad camera, but if you lock on, you will be completely unable to deal with attacks coming at you from the side and behind, unless you are pre-emptively blocking, constantly.

It pains me to see that games developers are still making team multiplayer games with these glaring issues in. Naruto to Boruto: Shinobi Striker feels incredibly plain and minimalist throughout - not in a good way, in a cheap way. And then even when you find moments to really enjoy the game, there are several aspects that will constantly haunt you, reminding you that, no, this game can't and won't stay fun for long.

Everything feels like a grind in Shinobi Striker. From the single player missions to the thirty-second wait times on the results screen after every mission - yep, multiplayer or no, you have to wait for a damn timer to get rid of the results screen. This makes potential failure a million times more frustrating, as you can't simply jump back in and retry stages.

Reviewed on PlayStation 4 (code provided by the publisher). You can purchase the game for PC via Green Man Gaming, for PlayStation 4 or Xbox One via Amazon. 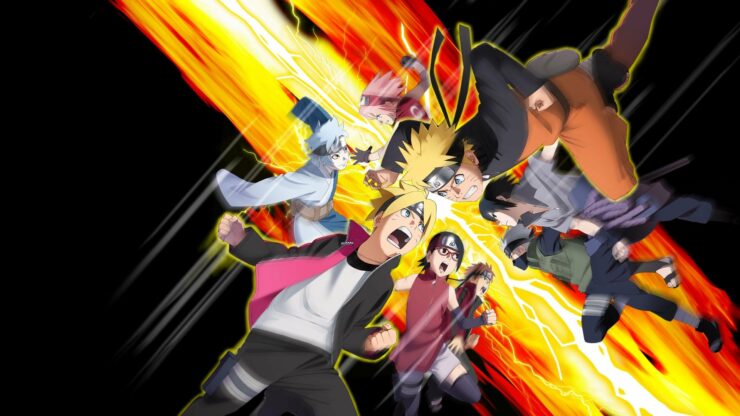 There are so many things I can complain about with Naruto to Boruto: Shinobi Striker, but ultimately, I can't help but admire the effort. It's not a cinematic experience like the Ultimate Ninja Storm games, and it won't take you through the story of Naruto or even Boruto, but when the multiplayer games work in your favour, it feels good, and unique. It's just a shame it doesn't feel good for long.