It is so disappointing when a game is so broadly good, but so very let down in so many key areas. My Hero Academia is one of the biggest anime and manga franchises in the world right now, and so when it gets a sequel to its huge video game adaptation, My Hero One's Justice, it should for be cause for celebration among fans. But it's not. The release has gone by with barely a mention, and that's because despite looking so good, despite featuring so many characters of differing playstyles, and despite the massive franchise the game is attached to, I can't help but come away disappointed from My Hero One's Justice 2.

That intro sounds incredibly negative, but broadly, My Hero One's Justice 2 is an incredibly well-made game. It continues to follow the story of Izuku Midoriya, a young lad born into a world of X-Men-like mutant heroes, with no abilities of his own. After being bestowed the gift of overwhelming strength, Midoriya, or Deku to give him his hero name, has his eyes set on becoming the strongest hero in the world, and we follow his path through hero school, learning the ropes of superpowered battling, making friends and enemies, and fighting against real villains alongside professional heroes. 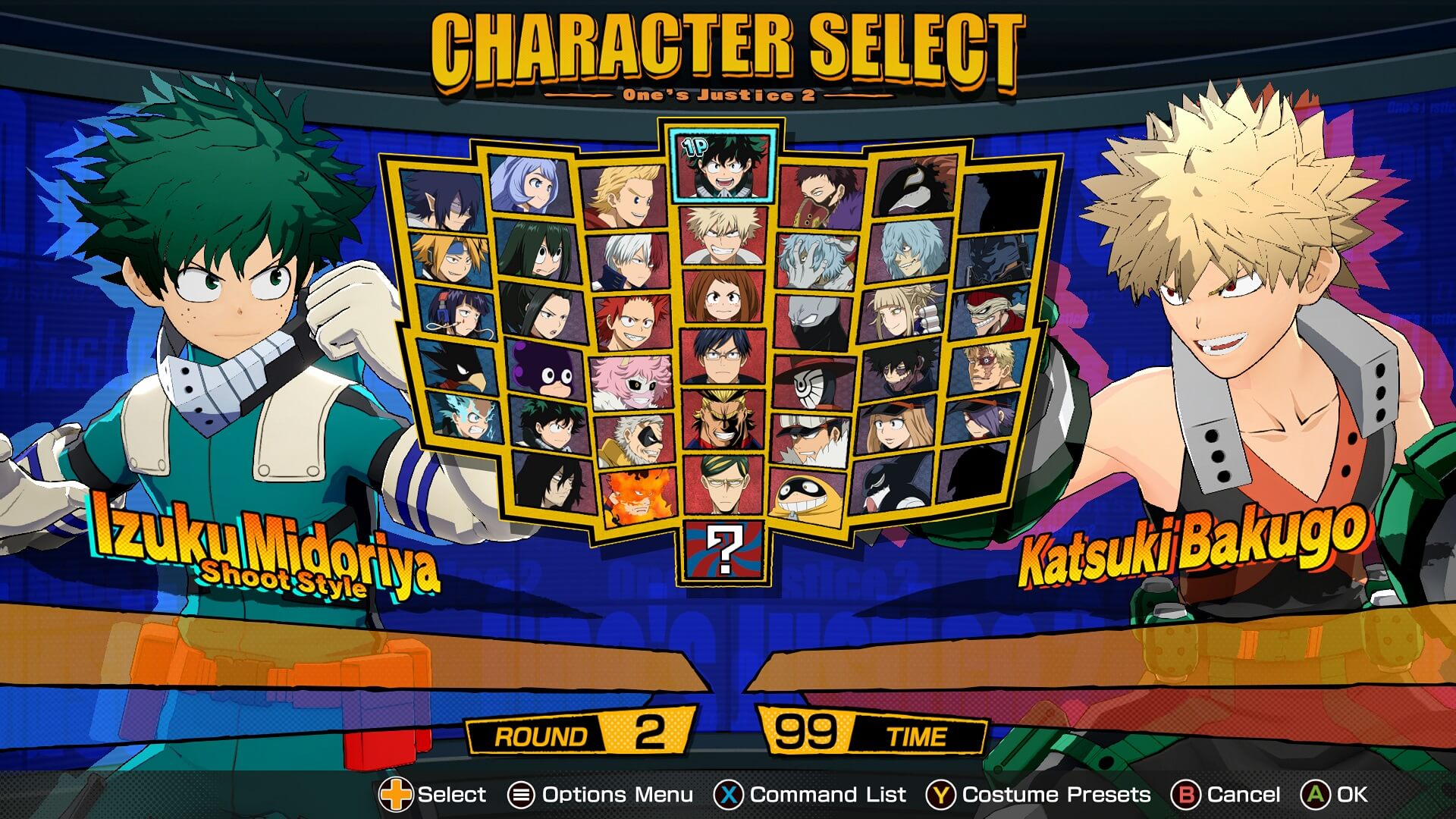 The main draw of My Hero Academia is the story of Deku and his friends, and I have to say that the material My Hero One's Justice 2 covers is as up-to-date as it gets. The saga featuring Overhaul and his Yakuza crew has only recently been aired in the anime series, and yet it is included here in the story mode, with full Japanese voice acting. Not bad at all. What is a bit of a let-down though, is the way the story is delivered. The story is told with screenshots of the anime series laid out in a comic or manga-style paneling, while characters talk over the screenshots. These cutscenes outstay their welcome, and some of them are frankly too long, so you're likely to end up skipping through a few before too long. This is, unfortunately, not a good way to experience the story, nor does it provide any kind of supplemental material to flesh out the characters beyond what you have already seen. It reeks of missed opportunity and is disappointing when Dragon Ball, Naruto, and even Attack on Titan games get much of this right.

But the story mode is a good display of the characters and stages available to you. There aren't many My Hero Academia characters that aren't included here. We have the main cast, complete with their latest abilities, the new extended hero cast, including UA Big 3 Mirio, Nejire, and Tamakai, new heroes such as Fat Gum and Sir Nighteye, and villains including Overhaul, Kendo Rappa, and many more. It's a full cast, and the roster of 42 characters (when including characters which have multiple forms) is nothing to sniff at.

The stages also do a good job of replicating the schools, dungeons, streets, and general locations that you see throughout the My Hero Academia series - these locations are all fairly basic-anime-Japan, so they're not the most immersive, but they represent what you see in the series well. What's nice about the stages is their destructibility. Smashing opponents against walls will see them collapse, and fire sputtering from inside of buildings. The destruction is a bit nonsensical at times, honestly, but it looks really cool all the same and is nice to see in action. 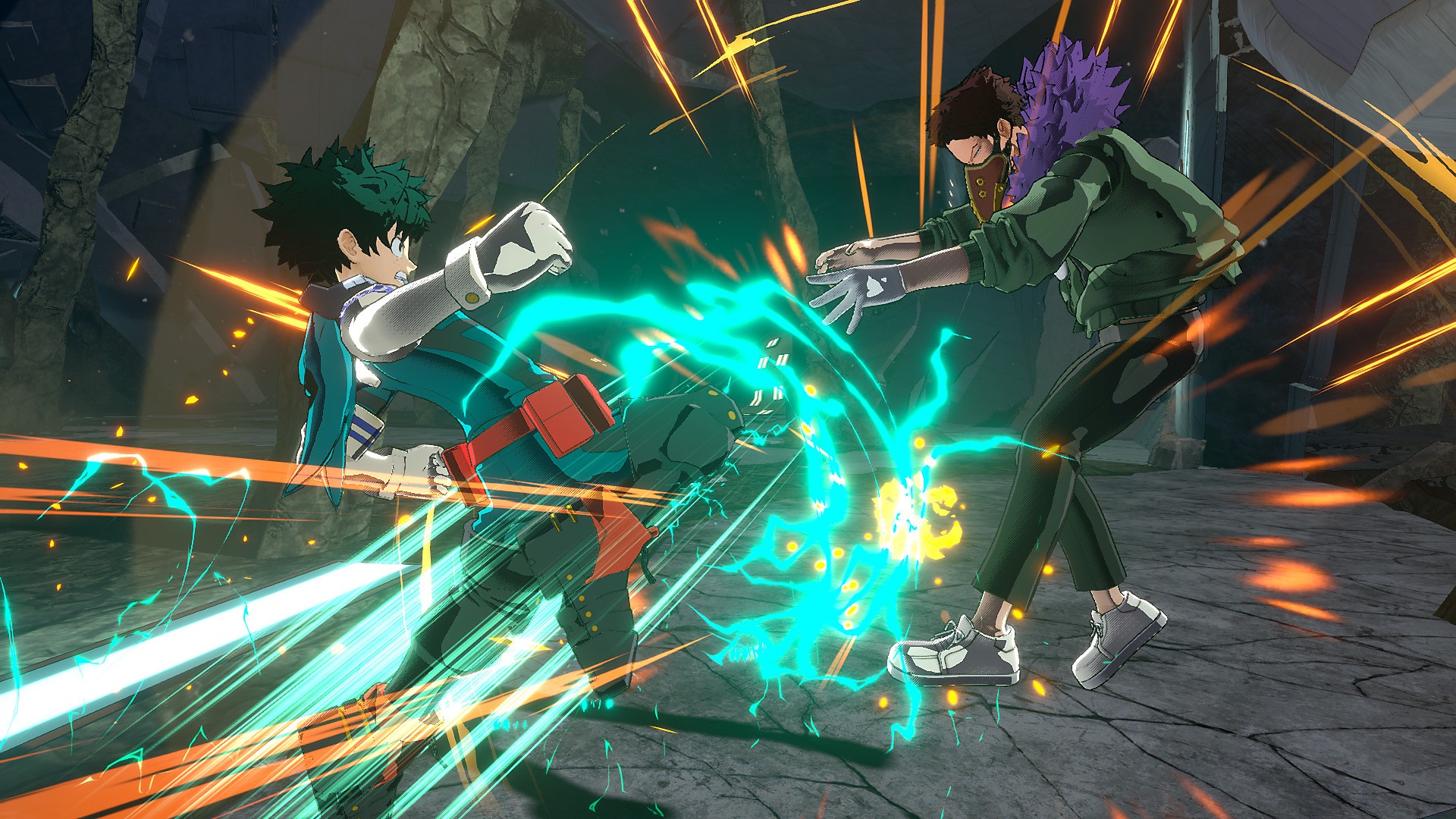 Which brings us onto the combat of My Hero One's Justice 2, which is simultaneously very strong and a bit disappointing. It's a 3D arena brawler, as you might expect, where you lock on to an opponent, and dash towards them, around them, and deal out your attacks with a basic combo button, and two further buttons which have your quirk abilities attached to them. Depending on your character, and the two characters you set as assists, you can potentially deal out massive combos. A general hint is that assist characters that manage to lock an opponent in place are excellent to use to extend combos, and you should be able to keep attacking them before your assist finishes. Also, characters with a ranged quirk, like One For All or Todoroki, make great zoners. All of the characters have a wide variety of abilities, from basic attack-focused characters to speedy rushdown-lovers, huge, slow characters with devastating combos, and much more. Your battles will see you double jumping into the air, and very occasionally battling along the sides of buildings like My Hero Academia is suddenly being directed by the Wachowskis. When you couple the action with the fact that the characters are well animated and absolutely look cool, you have a preliminary recipe for success.

The battle system works perfectly well, but when you're either playing fight after fight in Mission or Story mode against CPUs, it quickly wears very, very thin. The Arcade mode doesn't offer much of a respite either, and while playing against real players online definitely mixes things up, you aren't likely to stand a chance against a player that has optimized their team for huge combos and long-range hit confirms. Zoners are the big issue of the game - they're very cool characters to play, but only because they seemingly have so few counters, and when long-range fighters can confirm their hits into massive combos, the game begins to feel very unfair. 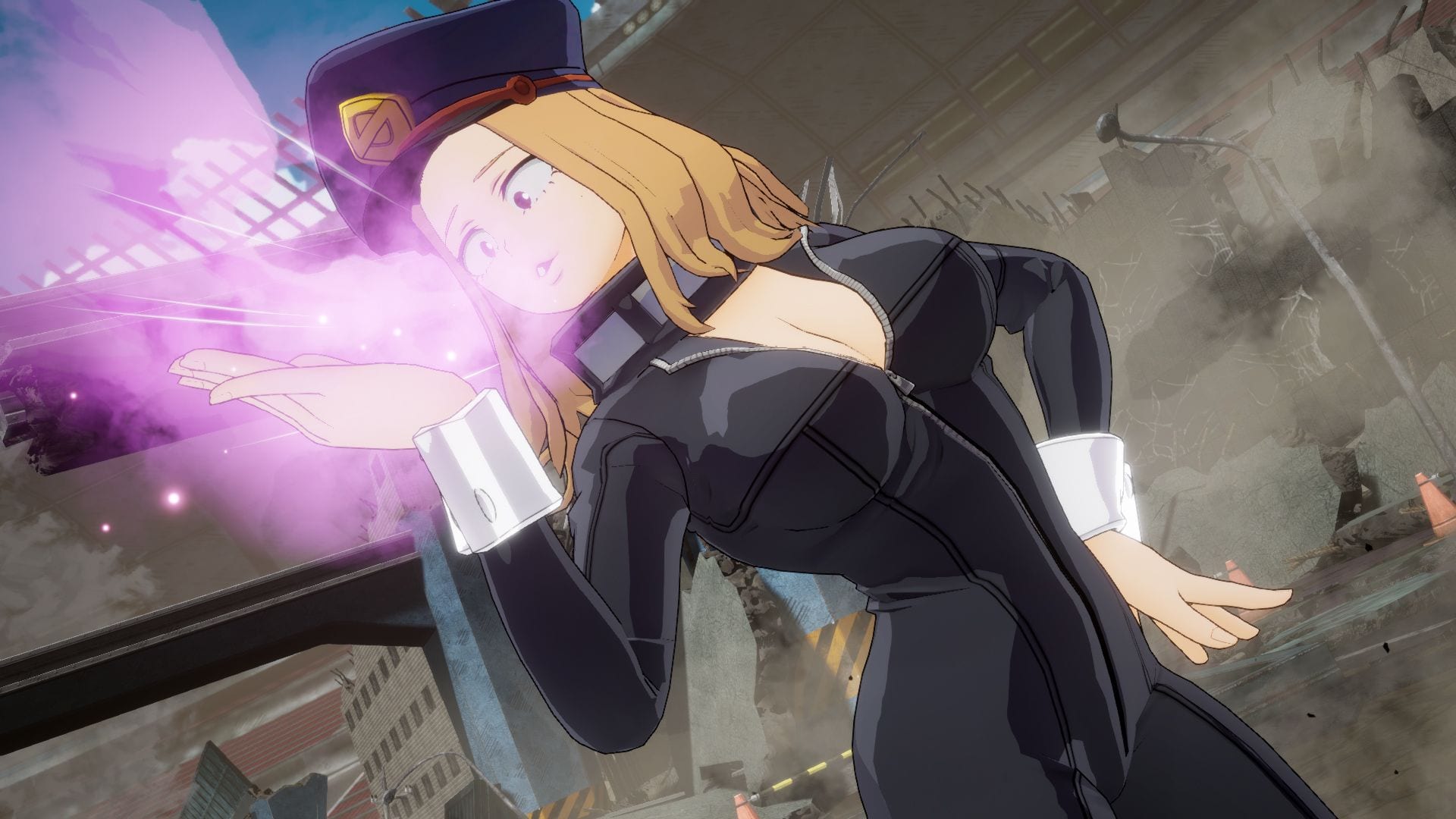 But even if you happen to think the character and game balance is very good and fair, you still can't ignore the framerate. Most of the time the framerate is very good, but for whatever reason slamming opponents into walls to see them crumble, causing a lot of effects of the screen, and especially Todoroki's fire abilities will all just tank the framerate, reliably, time after time. It's incredibly odd, very noticeable, and annoying, especially since Todoroki looks so cool. Might I add, this was all while being played on a PS4 Pro - this game looks good, but not good enough to ignore these performance issues.

It all adds up to a game with so much promise, which just ends in disappointment. I love My Hero Academia, and I'm keeping up with the series as it airs right now, but this has put a damper on my spirits. Although I adore seeing Overhaul in action in a video game, and I love the fact that the combat system has hidden depth, it feels fundamentally off, and I can't even admire the action when the framerate drops. Finish it off with a story mode that could put you to sleep, even if you're a fan, and you're left with a game which is good but should've been so much more.

My Hero One's Justice does so much right with a fun combat system and some lovely anime-style visuals but lets the whole experience down by a lackluster story mode, a lack of performance polish, and some serious repetition in the single-player content. Having said that though, these games keep improving, so if we're lucky, we'll be impressed by My Hero One's Justice 3.