Scott Pilgrim Vs. the World: The Game - Complete Edition

Ten years ago, Scott Pilgrim Vs the World was still a relatively obscure comic book series from Bryan Lee O'Malley, only really getting widespread recognition when famed director Edgar Wright (of the Shaun of the Dead and other titles in the Three Flavors Cornetto trilogy) helmed a film adaptation of the six graphic novel series into a major motion picture. Launching alongside the film, Ubisoft Montreal released an RPG brawler that turned the cult classic series into one of the most recognizable entries in the genre. Once thought lost to licensing hell and left behind on the PS3/360 generation, Ubisoft has finally re-released Scott Pilgrim Vs. the World: The Game in a Complete Edition across all modern platforms. 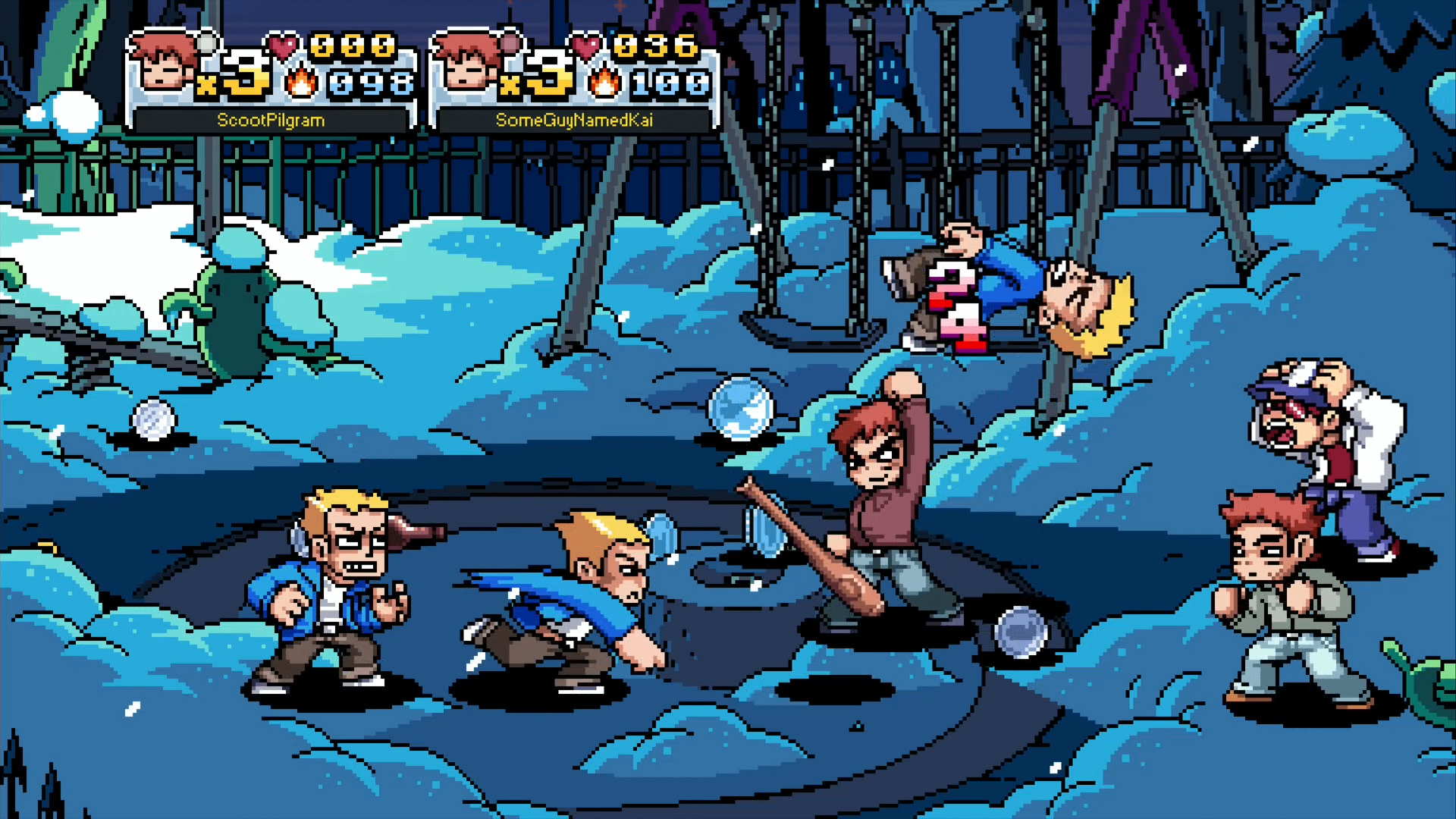 Whether you want to call it a belt action game, a brawler, a River City Ransom-like, or any other term to describe this RPG entry, Scott Pilgrim Vs. the World: The Game - Complete Edition is a fantastic representation of the genre. As one of seven characters from the graphic novel series, players will punch, kick, block, and strike down dozens of enemies in each stage with not only their limbs but also any manner of brick or trash can littered throughout the Toronto landscape. The brawler genre is known for overwhelming the player with insurmountable odds but the street fight is often tilted in the players' favor with an upgradable skillset and the ability to hit the streets with other players in co-op play. Once a DLC add-on for the original PS360 release, Scott Pilgrim Vs. the World: The Game - Complete Edition allows for both couch and online coop throughout all seven stages of the game.

Seven playable characters, seven stages to play through, seven evil exes. The number seven holds a special connotation to Scott Pilgrim for obvious reasons. In order to score a chance with Ramona Flowers, the delivery girl of his dreams, Scott must first fend off against all seven of her evil exes in order to stand a chance with her. Think the eight evil robot masters from Mega Man, only the only upgrades Scott Pilgrim's going to unlock in his adventure is the ability to beat more ass. 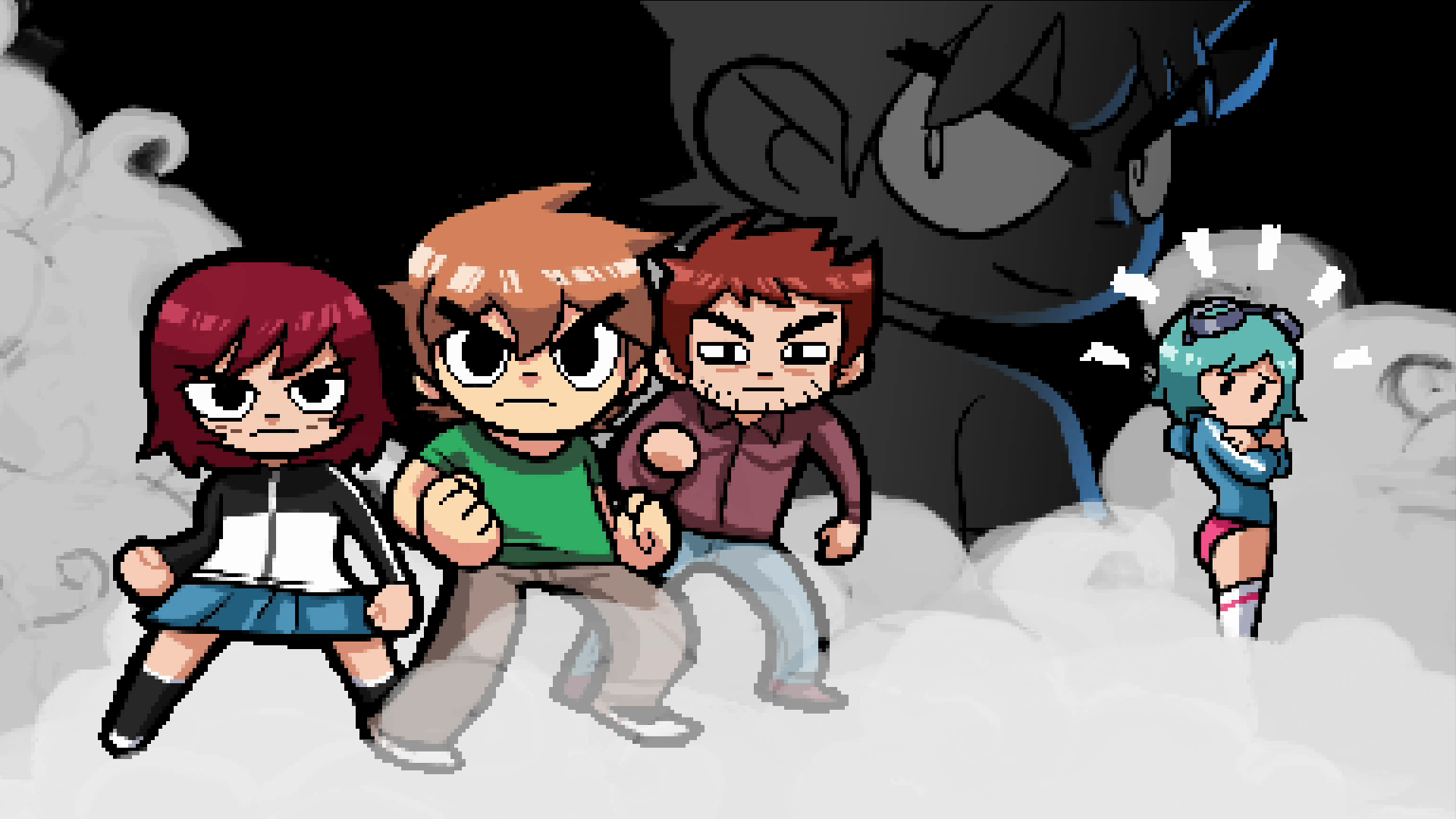 The iconic (and often grotesque) artwork of Paul Robertson still holds up here today as well as it did when Scott Pilgrim's brawler first was released on consoles two full generations ago. Despite the increase in console power and resolution, Scott Pilgrim Vs. The World: The Game - Complete Edition still runs at 1080P, although you might not be able to tell due to the chunky pixel artwork for enemies and backgrounds alike. There's a playful amount of color that helps this rendition of Toronto come alive and all manner of denizen still look amazing to all fans of pixel artwork. Not much was done here to change the presentation and frankly, the game didn't need any changing in the first place.

Part of what made Scott Pilgrim Vs. The World: The Game so iconic a decade ago was the infusion of light RPG mechanics into this brawler, paying tribute to the Kunio-Kun/River City Ransom games of long ago. In persistent character progression that carries over from round to round, each playable character in Scott Pilgrim Vs. the World grows in power in one of two ways. The first, through basic experience points, gives each character a new combat move each time they level up to a maximum of level 16. Despite each character having minute differences from one another, they all tend to have the same similar progression in terms of new moves. Their final technique is hidden in a Stage 6 shop, so don't worry if you're missing a skill by the time you take out all seven evil exes. 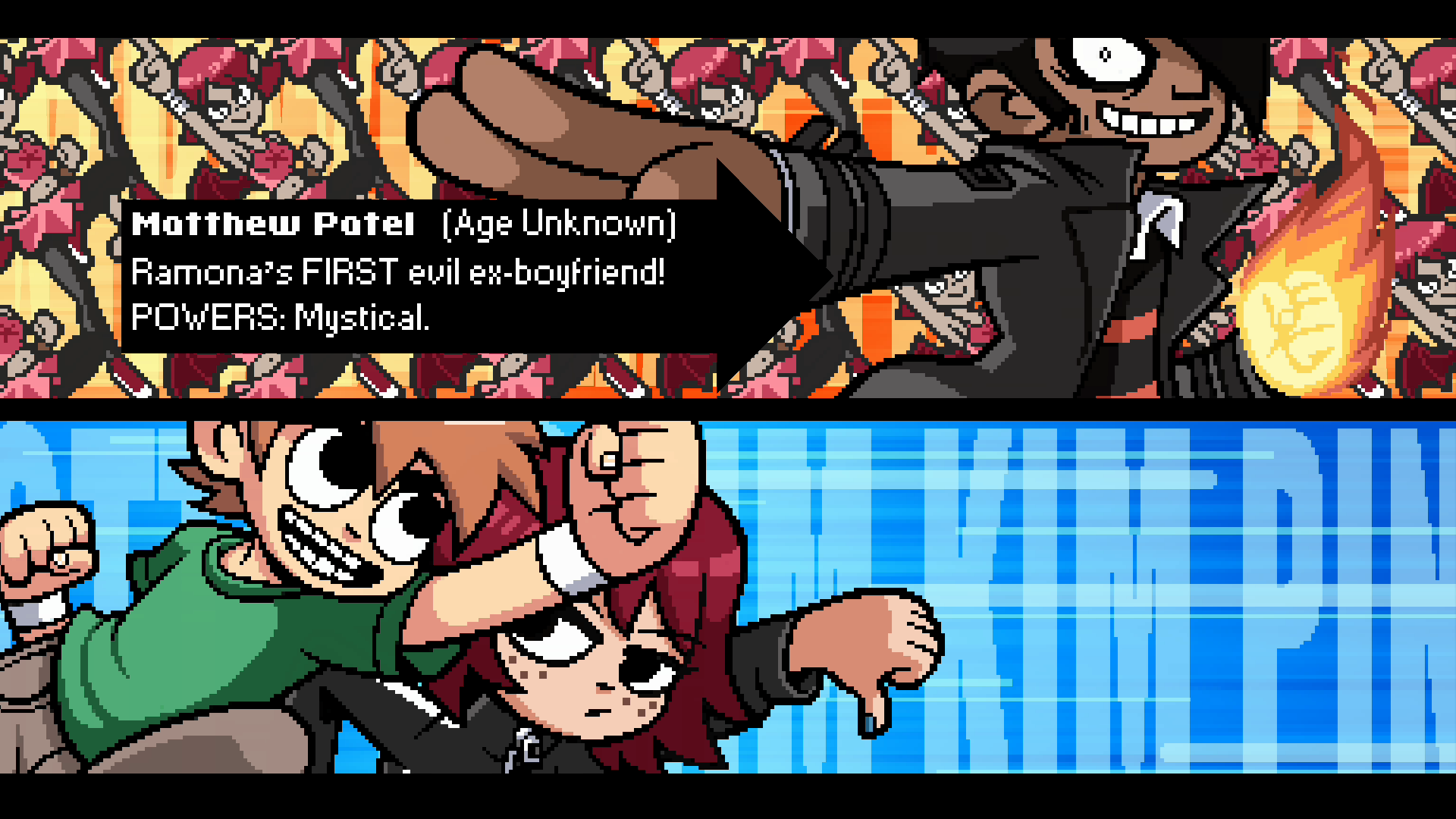 The other way characters level up in Scott Pilgrim Vs. The World: The Game - Complete Edition is from consuming food and investing in upgrades at the various stores scattered throughout each level. Each item that Scott and his crew eat or read will recover a sliver of health points and usually increase one of the four core stat points (strength, defense, speed, and will power) up to a maximum of 100 in each category.

Leveling up your stats is almost essential once you break past the halfway point of Scott's journey to defeat Ramona's seven evil exes. Unless you invest heavily into both defense and strength, it isn't uncommon to get overwhelmed by even the common enemies throughout each level. A high defense stat cuts incoming damage down to a minuscule amount which also includes falling off the stage into one of the many pitfalls scattered throughout the world. 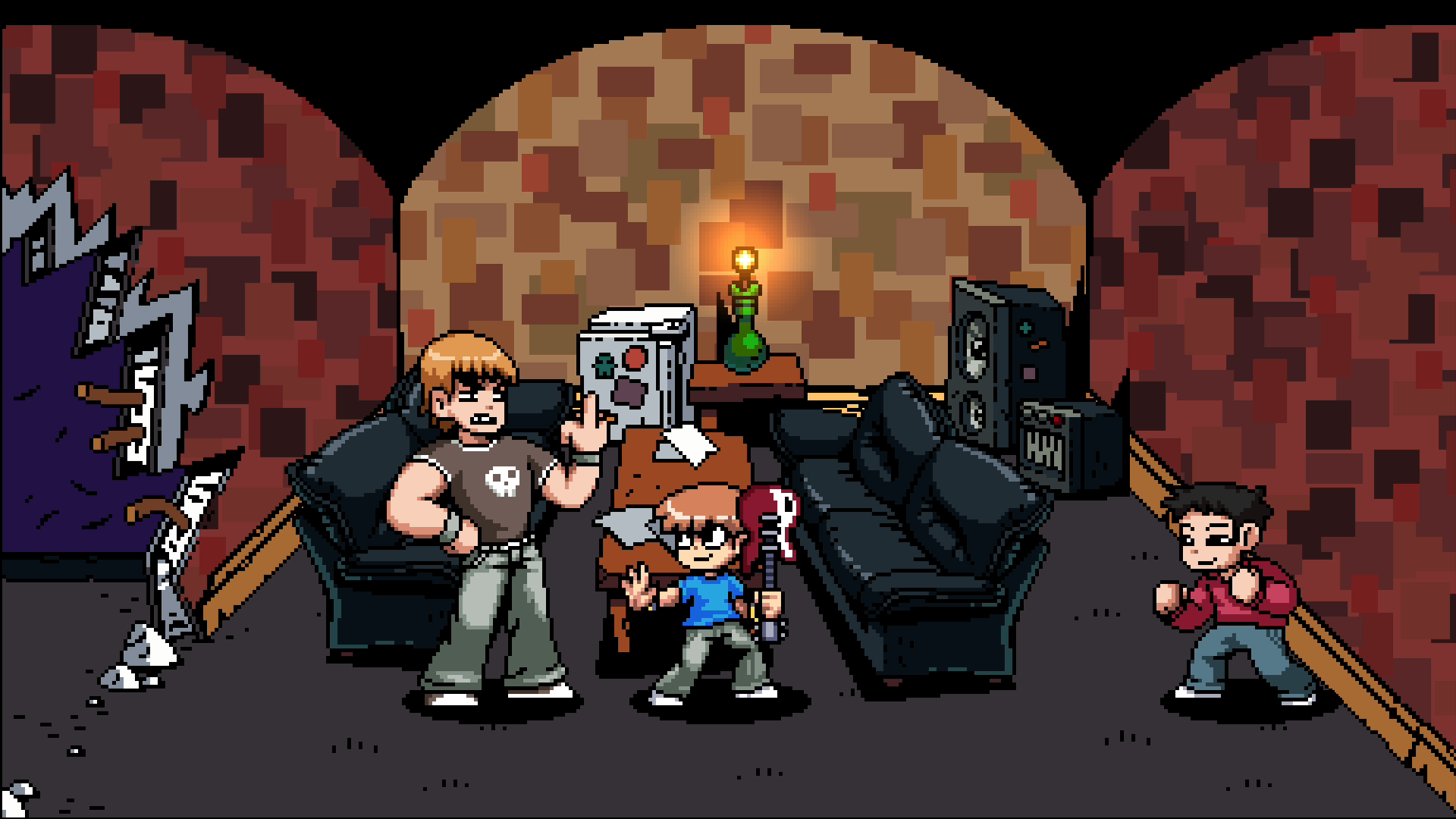 You could play Scott Pilgrim Vs. The World: The Game - Complete Edition normally and spend the cash you pick up off of the bullies and antagonists throughout the world on burgers and other healing items in hopes of getting a small stat boost. Otherwise, there are two main ways to level up that still persist from the original PS3/360 release. The first, paying off Scott's late fees at the local video shop and renting films for $4.95 a pop for +10 to all stat or an absurd amount of EXP; the other is to pay $17 or so at the local record shop for a copy of the latest Smashing Turnips LP for +8 to strength a couple of times before you finish the first stage and then returning every so often for a crucial stat boost. Either method will require a substantial amount of grinding to max out your chosen character to full stats, a near essential requirement in order to clear the third and highest difficulty level.

After grinding all but the secret unlockable character to level 16 with maximum stats, I found the light RPG mechanics to Scott Pilgrim to be a bit of an archaic concept (and this is coming from someone that loved River City Ransom). Having to hit artificial strength and defense thresholds to survive the back half of Scott's adventure hasn't aged all that well. But that's simply the nitpicking of an old man that's already played this particular title to death a decade ago. In case you're wondering, the Konami code to explode into a rain of $2 coins (and even the code to let two players choose the same character) don't seem to work this time around; all of the other hidden cheat codes including the one to start every level with the Sword of Love do still work and help to exponentially cut down on grinding time. 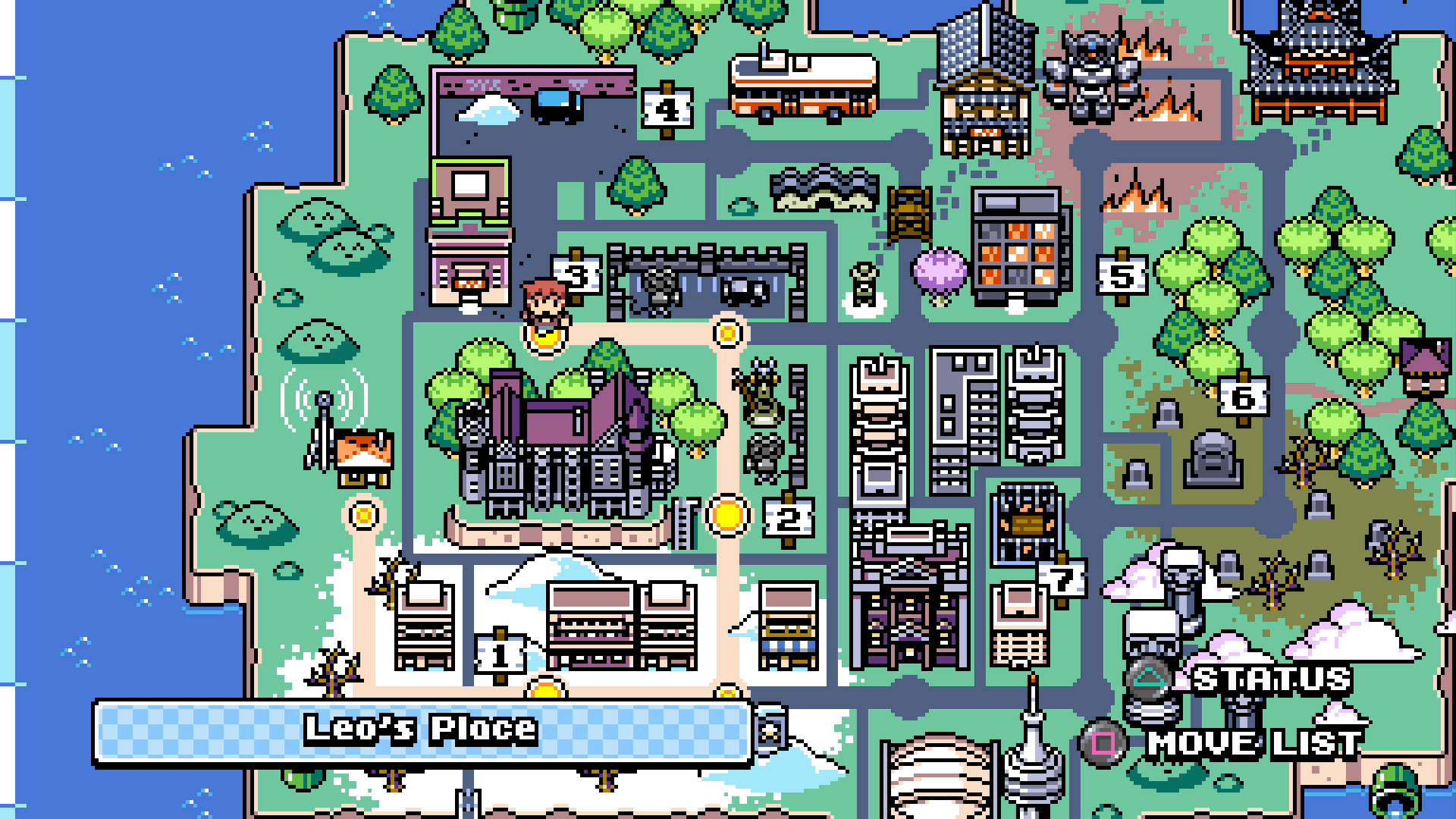 Now you might be wondering what's new to this Complete Edition of Scott Pilgrim Vs. the World: The Game. From what I've seen having played through the campaign half a dozen-plus times is the inclusion of a mandatory Ubisoft Connect login if you want to play the online multiplayer mode. Beyond that, you're getting both the Knives Chau and Wallace (which added online play) DLC plus a few bonus mediocre modes that round out the complete package. For achievement and trophy hunters, Scott Pilgrim Vs. the World Complete Edition does include a fresh 1000G and Platinum trophy while spouting an identical list to the original PS3/360 releases. If anything, there appears to be some glitches and codes removed this time around. As mentioned above, two of the cheat codes don't appear to work and the infamous Hillside Park that would let you skip half of the first stage instead drops you right back into the fight instead of letting the player speed run through the rest of the level up until the showdown with Matthew Patel, the first of Ramona's seven evil exes.

If you've scrolled all the way to the bottom to see what score we've given Scott Pilgrim Vs. the World: The Game - Complete Edition without reading the rest, consider that this is a barebones release of what was already a fantastic brawler. Ubisoft Montreal's hard work from a decade ago is well worth experiencing once more, doubly so if you've ever watched the film or read the graphic novels without being able to purchase this particular title before it was delisted. However, coming up on a decade since its original release, there isn't much that Ubisoft has done to entice players back into wooing Ramona Flowers once again.

Scott Pilgrim Versus the World Complete Edition certainly aims to be a faithful collection of this decade-old RPG brawler but with a near-zero list of improvements, it's tough to call Scott Pilgrim's adventure anything more than a pre-wrapped gift to the fans.