My headphone collection seems to be constantly growing with new units that find their way onto my desk. From Astro A40 headsets that let the user customize their build design to a plethora of Bluetooth headphones, I only really opt to check out headphones that offer something unique beyond just a good audio profile. Avantree reached out to me sometime last month with an invitation to demo their latest Bluetooth headset in the Aria line: the Avantree Aria Me Wireless ANC headphones. What intrigued me most about this particular headset was in just how similar it was to a headset I got my hands on last year during an Indiegogo campaign.

The design between the Avantree Aria Me and the Mu6 Space headphones that I demoed last year are strikingly similar in a lot of ways. That same creaking plastic that I wound up cracking after a couple of months of regular use on the Mu6 Space is present on Avantree's newest headphone line. I've been fairly careful with putting the headset on and off before folding it up and storing them in the included storage case between uses, but I know that all it might take is one 2 AM redeye flight to stretch them an inch too far before that inevitable plastic cracking occurs. For casual use around the house, the Aria Me has a nice weight balance that helps them sit comfortably on both ears without the same weighty feel of the Mu6 Space. The soft 'protein leather' earcups hold up fine to sweat during the hot and humid summer months while still remaining snugly in place. They're missing some of the cushioning on more premium headsets but still holds up in regular use; as a regular glasses wearer, they also don't squeeze the temples which will always be a positive in my book. 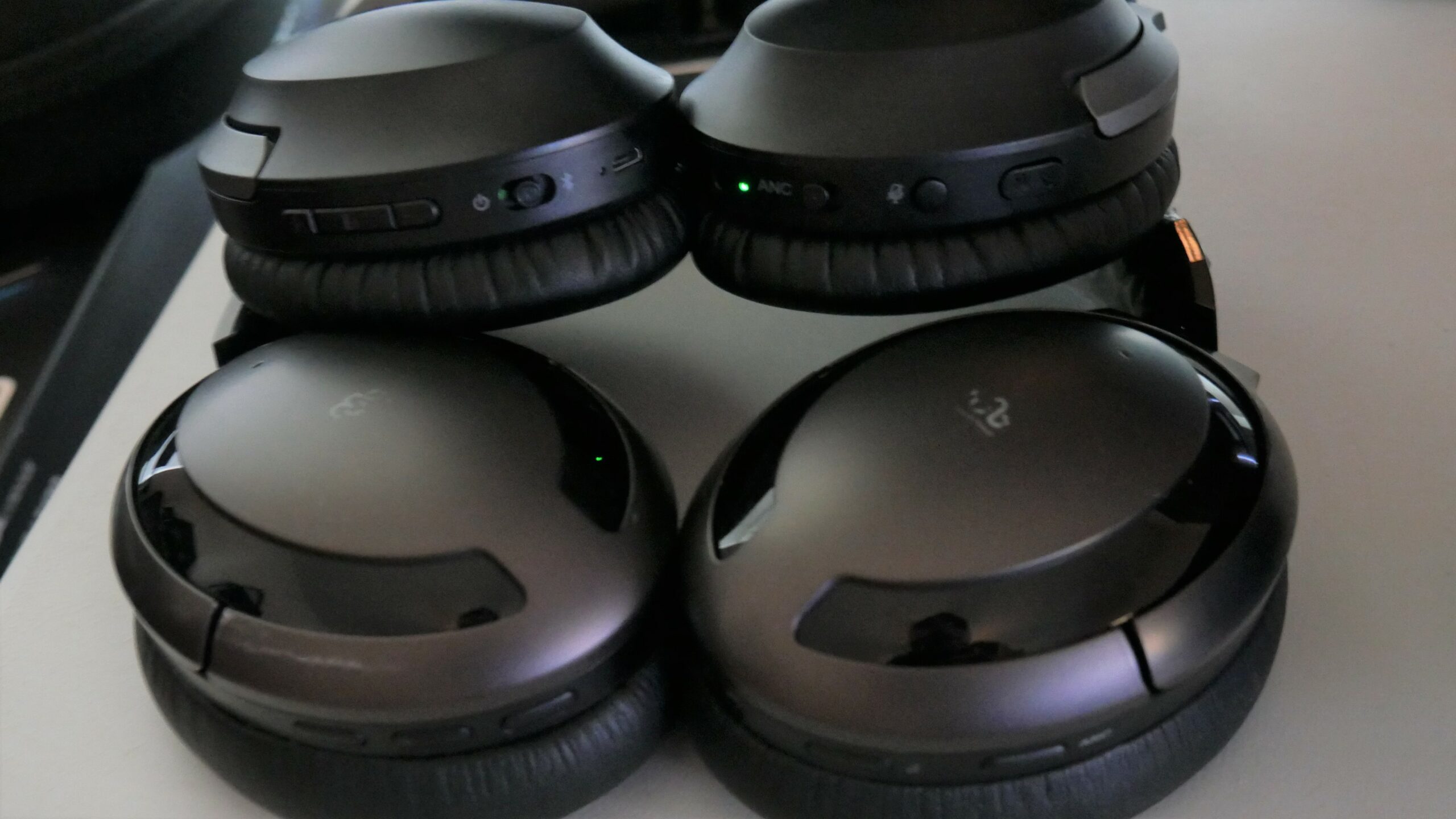 What separates the Avantree Aria Me bluetooth headphones (and the Mu6 Space that came before it) from others on the market is in the ability to customize audio levels based on the wearer's hearing. It's a scientific fact that one's hearing decreases with age despite all of the advances in modern medicine. Some of the high tones are imperceptible as people get older so having a way to dial those tones down to what you physically can hear is an interesting concept.

The Avantree Aria Me headphones feature a customizable audio compensation algorithm that's pretty straightforward to setup: listen to a series of progressive tones and rotate an on-screen dial until you can no longer hear the tones, repeating the process eight times for each ear. Once the profile is generated, it can be saved directly on the Aria Me headphones and utilized without needing the app running in the background. Once the profile is loaded onto the bluetooth headphones, any device that the user connects the Aria Me to can take advantage of the custom audio profile and can be freely toggled by holding the play/pause button for a few seconds. Without the custom profile enabled, the audio sounds a bit muddy and the lower range notes get washed out against vocals and guitar licks. Afterwards, I was open to hearing a whole new range of audio and it was like someone just dug up the original masters for what I was listening to. The instant change in clarity left me wondering if those crisper tones had been there all along and I was just getting too old to notice. If you're going to pick up a pair of the Avantree Aria Me, definitely download the companion app and 'set and forget' the audio profile. 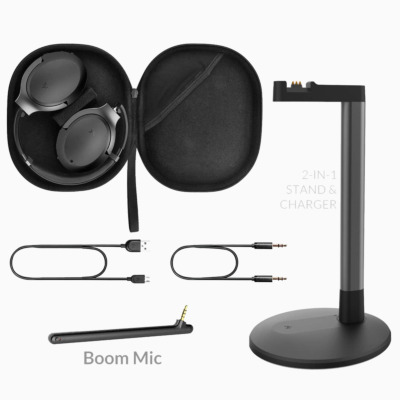 Each of the buttons on the Avantree Aria Me can easily be reached along the underside of both the left and right earcups. On the left earcup are a toggle switch for the ANC, microphone mute, and a button that can answer/hang up calls as well as connect to whatever personal assistant is running on your device. The other side features a three-button strip for play/pause, volume up and volume down. The latter two buttons can be held to skip/repeat songs, a command I had to retrain myself on because of my previous headsets skipping if the button was tapped rather than being held. A power switch rests below these buttons and will be used to turn the headset off when switched fully to the left, powered on when switched to the middle, and set in Pairing Mode when switched all the way to the right. This feels like a major oversight that users might accidentally switch to pairing mode every time they turn the Aria Me on and is a feature I'd much rather see relegated to either its own button or a lesser used switch.

When taking a call on the Avantree Aria Me, you'll still be able to hear your music or podcast in the background, although at a reduced volume and fidelity. The bass and custom equalizer settings I placed seemed to be discarded once I was in a call. I don't expect to regularly have music on in the background during my Zoom meetings with the Aria Me on but I usually have to listen to music as I write and having to lose out on audio fidelity during a Discord group chat can be disappointing. I'd be fine with just reducing the music volume by a set percentage but lowering the audio quality too? No thank you.

Both the Avantree Aria Me headphones and the included charging stand both operate on micro-USB inputs to charge, a striking negative in 2020. Save for my DualShock 4 controller that gets used nightly for PS4 Remote Play, nearly everything else in my everyday carry bag operates on Type-C. This was something I brought up with Avantree's media contact and was informed that the charging port will be changed in a future revision (as will the plastic frame). If you don't mind having to throw an extra cable in your pack to charge up the headphones on the go, having a micro-USB port isn't a dealbreaker but is an otherwise blemish on the $150 asking price.

No, the Avantree Aria Me won't replace your $350 Sony WH-1000XM4's if you've already picked some up this month. Avantree's headset is targeted towards the consumer that doesn't want the best audio quality but rather to be able to hear the whole range once again. The customizeable audio profile gives the Avantree Aria Me a unique place in the market for those that want to enjoy their favorite songs just as they did years ago. 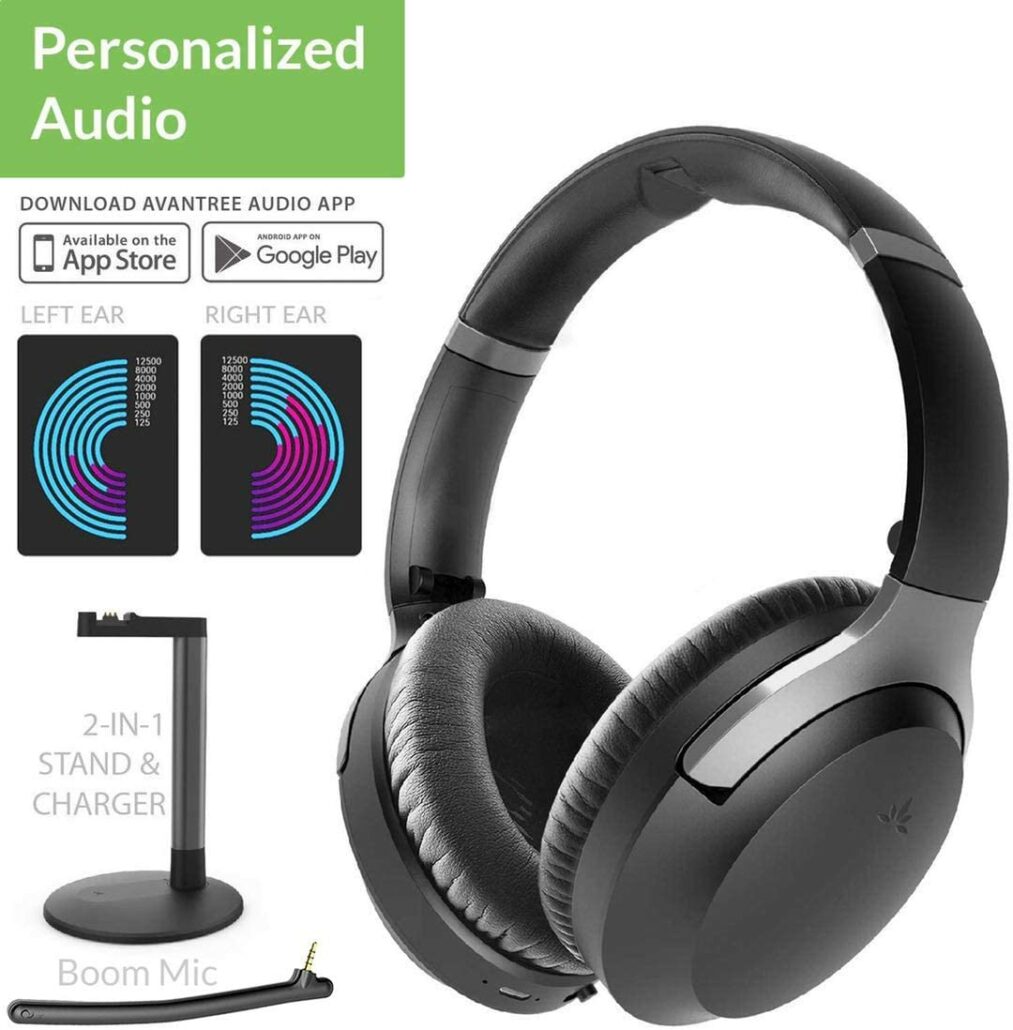 The Avantree Aria Me Bluetooth Headphones retail for $149.99 but you can use coupon code J3BEE75R at checkout to save 10%, bringing the total price down to $134.99. The coupon discount is valid on Amazon until August 30th.

The Avantree Aria Me bluetooth headphones can be a great gift for older folks that could use a headset that can compensate for reduced hearing. It may not be a perfect solution but these ANC headphones have some features that you won't see on many other wireless sets.