The NBA 2K series has continued to dominate when it comes to buzzer-to-buzzer action, but recent entries haven’t quite lived up to their full potential off the court. Sure, loyal round ball fans have continued to plunk their cash down in record numbers, but not without a fair amount of grumbling from some corners. NBA 2K18 went too far with its money-grasping monetization schemes, and 2K19 continued that trend while also mishandling MyGM mode and some other key features.  Both were good games, but not necessarily great ones.

With a new set of consoles arriving next year, the NBA 2K franchise will likely be kicking off a rebuilding phase soon. So, does NBA 2K20 send this generation off with a bang? Or does it feel like that veteran that’s held on too long? Lace up your sneakers, it’s time to find out… 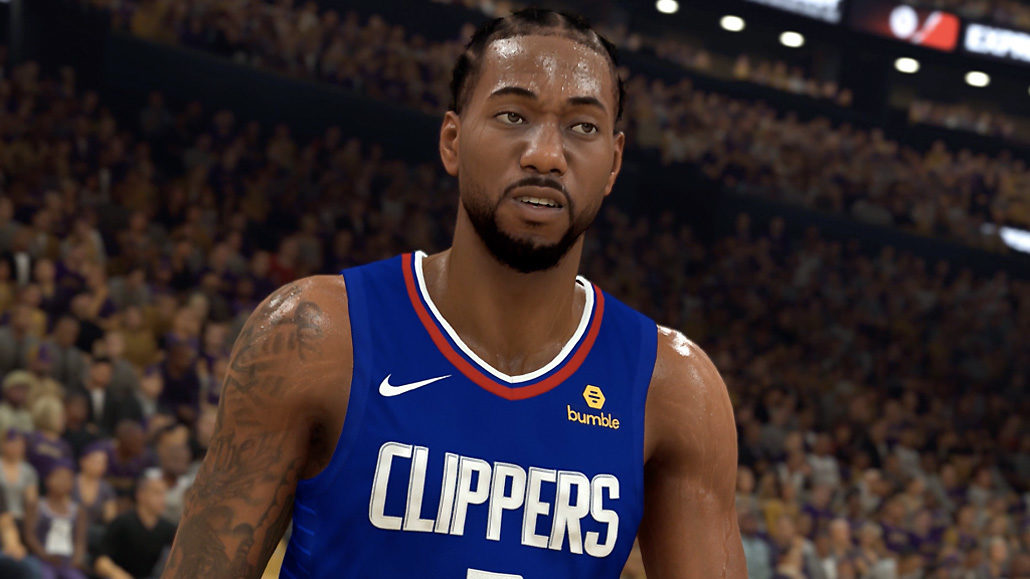 As fans have come to expect, NBA 2K20 does a nice job of balancing depth and accessibility, with everything you need to get by -- passing, ball handling, shooting, defense – being intuitively mapped to the two thumbsticks, face buttons, and L and R triggers. Don’t expect any major new additions, like last year’s Takeover mechanic, but NBA 2K developer Visual Concepts have introduced a variety of welcome tweaks and improvements.

NBA 2K20 is a touch slower than last year’s game, but it actually feels more fluid thanks to an updated animation and motion system. Players are quicker on their feet and the game looks and feels as realistic as it ever has. Last year’s game did a good job of making shooting less fussy and frustrating, and 2K20 continues in that direction – you can’t be reckless, but if you pick your shots well, you should be able hit jumpers and three-pointers consistently, even with defenders up in your face. Overall, the game feels a bit more offense-oriented this year, which is fine. I prefer to end games with proper NBA-like scores, instead of winning with 70 points. Overall, NBA 2K20 just feels right. Authentic yet empowering, and a huge improvement over where the series was a couple years ago. 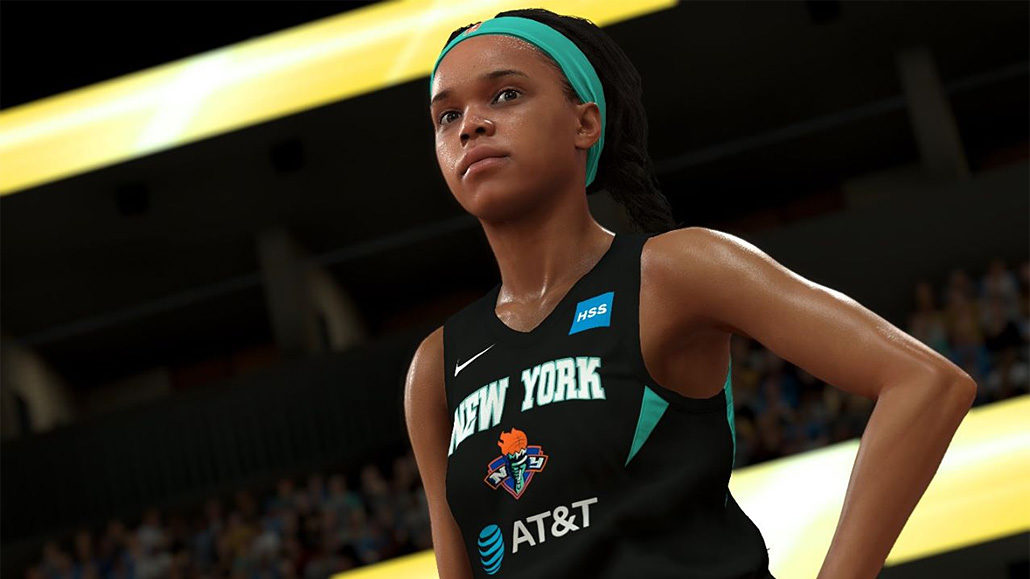 Visually, the game’s about on par with what we’ve seen the past few years. The NBA 2K engine is well past its prime, but Visual Concepts manages to squeeze a few more drops of blood from the stone. As you would expect, big stars like LeBron James, Anthony Davis, and Kawhi Leonard look great, but even most of the second-stringers look okay this time around. WNBA players, making their first appearance in an NBA 2K game, are a welcome addition, although their character models are a bit inconsistent and generally less expressive than their male counterparts. That said, if I’m honest, Visual Concepts did a better job with the WNBA stars than I was expecting (the female wrestlers always look downright embarrassing in the WWE 2K games). NBA 2K20 still feels like a top-of-the-line product, even if it’s slipped slightly behind some competitors like EA’s FIFA series in terms of presentation. 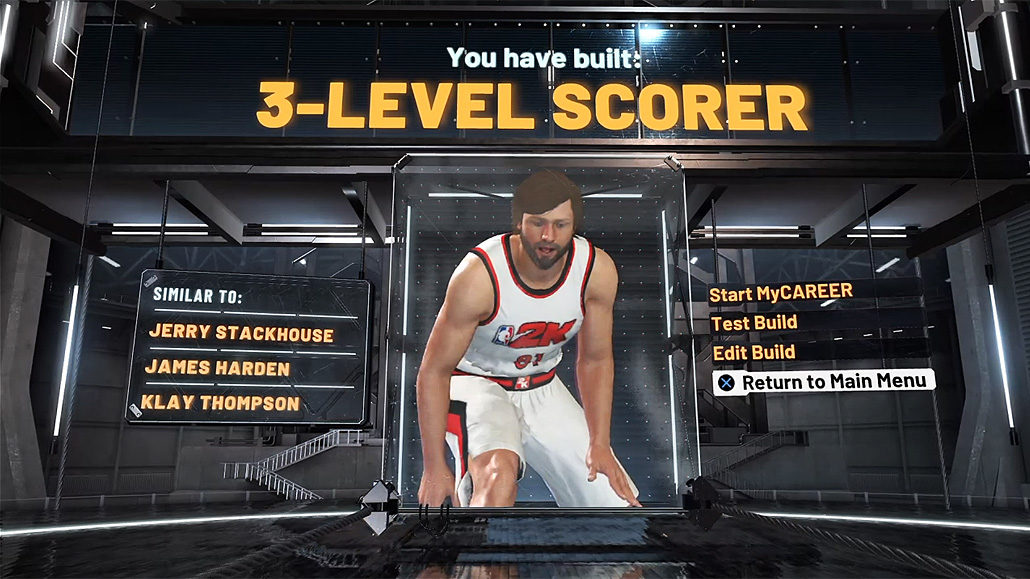 As in the past, NBA 2K20 is roughly split into three parts – MyCareer, MyTeam, and MyGM/League. MyCareer is as good as it’s ever been, starting with a thoughtfully revamped MyPlayer creator. The editor has been streamlined in many respects, but ultimately gives you more freedom to create the kind of baller you want, both in terms of look and playstyle. Once you’ve customized your player’s appearance, it’s up to you to decide on the position, balance of skills (shooting, finishing, playmaking, and defense), and physical attributes (speed, strength, acceleration, vertical jump) you want. This is all presented as a very easy-to-understand series of pie-charts you choose between. From there, you pick a Takeover and assign attribute points to determine your character’s maximum potential, giving you full control over how they’ll grow and develop as you play. Once you’re done, the game will tell you exactly what class you created. It’s all rather satisfying, and I actually rolled up several players before settling on a relatively well-balanced “3-Level Scorer” shooting guard. 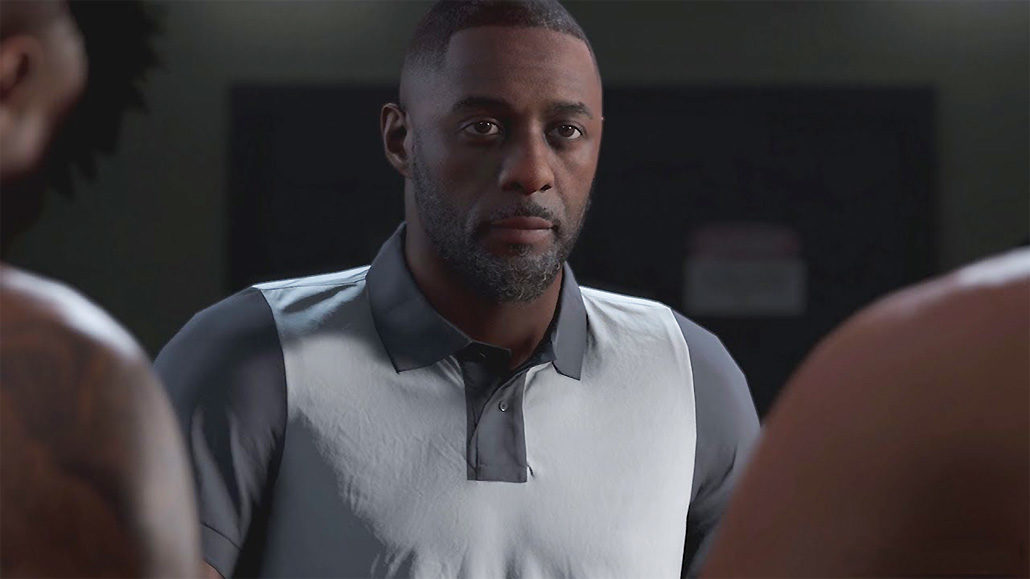 MyCareer’s cinematic prologue is produced by LeBron James and his company SpringHill Entertainment, and the results are fairly impressive. This year’s young up-and-comer hoping to make it to the big leagues is “Che,” an idealistic agitator clearly meant to invite comparisons to Colin Kaepernick. Che decides to sit out a college championship game when his coach forces a teammate to transfer to a new school, which (somehow) becomes national news. I refuse to believe even diehard college basketball fans would care that much about one guy missing a single game due to a coaching dispute, but hey, faux edginess aside, this is still the best-told story the series has offered to date. The cutscenes are impressive, the celebrity cast including Idris Elba, Rosario Dawson, Thomas Middleditch, and, uh…Urkel, turn in good work, and the journey feels a bit more grounded and truer to life than in the past. The prologue also serves up some unique gameplay scenarios, including an all-star pickup game on a movie backlot and full recreation of the NBA Draft Combine. 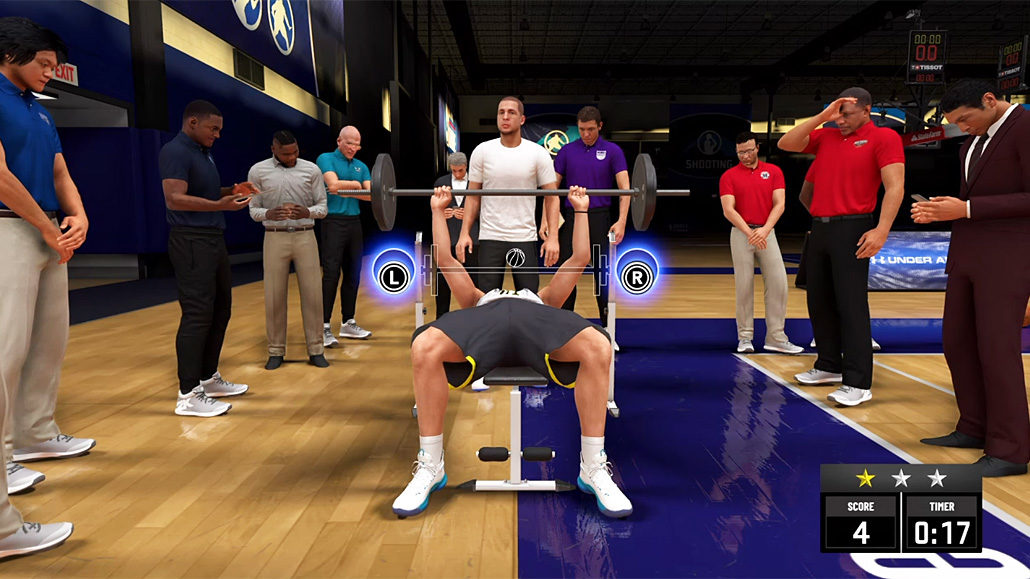 Of course, as always, the flashy cinematic prologue only lasts around five hours, at which point, you join an NBA team and get down to the repetitive business of working through the season. A few more decisions and quick cutscenes are mixed into the regular season now, but, for the most part, the drama is left behind. As I’ve said before, I wish more of the personality found in the prologue could carry over into MyCareer proper.

At least it doesn’t feel like MyCareer isn’t trying to separate you from your money as aggressively as before. The amount of grinding needed to get a player to level 99 has been dialed back far enough that people with actual lives will be able to get there without buying additional virtual currency (VC). Mictrotransactionville (er, I mean My Neighborhood) returns, but it’s literally a copy-and-paste from last year, with little to no new features. That’s not a great thing, but looking at the silver lining, My Neighborhood is now hidden away in a menu rather than being constantly pushed on players. Overall, the monetization of MyCareer just feels less up in your face this year. The same can’t be said of MyTeam, which is more shameless than ever. This year the Ultimate-Team-style mode goes full-on casino with slot machines and roulette wheels you can spin for prizes. That may sound pretty scummy, but as usual, MyTeam is pretty much sectioned off from the rest of the game. If collecting virtual basketball cards is your thing, have at it, and if it’s not, you can pretty easily ignore the mode. 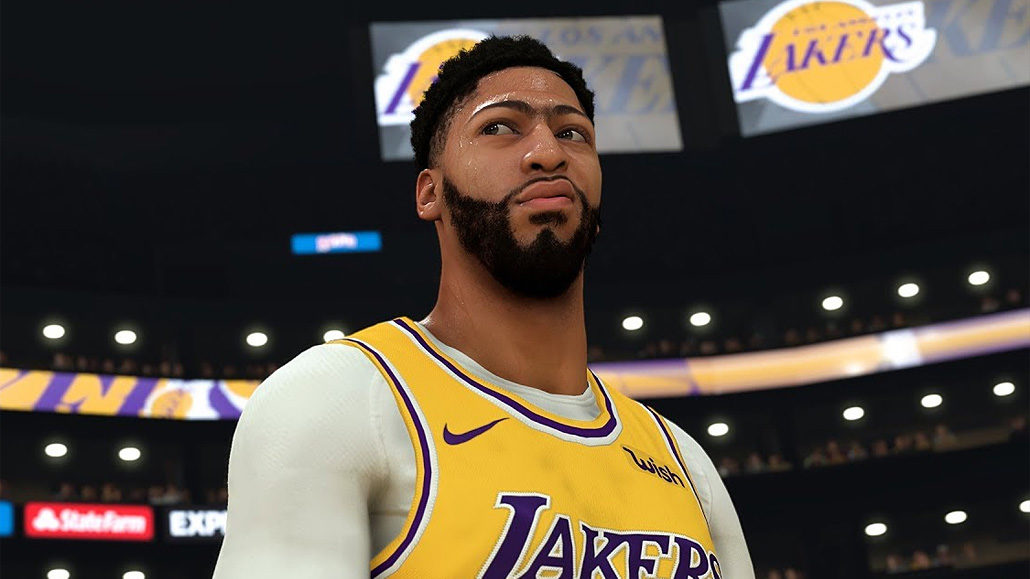 The best place to get away from the temptation to buy VC is the mostly microtransaction-free MyGM, which is, thankfully, back up to par this year. The mode now has some light RPG elements, with players only getting a certain number of action points per turn as well as earning XP to unlock new abilities on a skill tree. Some MyGM veterans may chafe at not immediately being able to do whatever they want, but I think some structure to help players made sense of all the info thrown at them is a good thing. I’m also glad to report the interminable written-by-Grandpa-Simpson dialogue from last year has been trimmed way back. Characters still get into random arguments about Taco Bell being better than Wendy’s or whether it’s acceptable to not wash your legs in the shower (no really, that’s a real conversation), but at least these wacky discursions are brief and can be safely skipped if you want.

And that’s NBA 2K20. As I’ve made clear, there aren’t really any big new modes or bullet points this year, but a lack of content has never been an issue for this series. This year’s basketball feast may be a bit familiar, but it’s still just as satisfying.

This review was based on a PS4 copy of NBA 2K20 provided by publisher 2K Games. You can purchase the game on Amazon.

NBA 2K20 is the series’ best showing in several seasons. The action is more refined than ever, MyCareer serves up a fun story with less grind, and MyGM mode is back on track. Microtransactions continue to be a concern, but the most egregious stuff is restricted to MyTeam mode, with MyCareer actually feeling less exploitative this year. Hopefully we’ll see a more substantial refresh in the next year or two, but, for now, the NBA 2K dynasty remains strong.