The Mighty Quest for Epic Loot

The Mighty Quest for Epic Loot was a free-to-play PC title which shut down on October 2016. Now, though, it has made its way to Android and iOS a few weeks ago. I haven't played the PC version of The Mighty Quest for Epic Loot, so the mobile version of the game is my first experience with the franchise, though I know the castle-building mechanics have been cut from the mobile version.

The game is your garden variety hack and slash title with very little in the way of combat mechanics. Several different skills and talents can be unlocked as the game progresses, but they don't affect the way the game is played for the most part. The mechanics are relatively basic, and you'll get used to them in a matter of minutes. Dragging the bottom portion of the screen moves your character, quickly swiping anywhere on the screen makes your character roll in that direction and tapping the screen prompts your character to attack. Three skills are located at the bottom left corner of the screen and can be activated by a tap. Now, I get that the mobile platform has some physical limitations when it comes to controls, but these are too simplistic even by mobile standards. Similar to other mobile titles, there's also an 'auto-combat' mode where your character moves and attacks automatically. All you need to do is dodge projectiles and use skills.

The graphics are bright and cartoony and radiate a sort of morbid yet joyful aura. The game ran at a solid 60 frames per second on my Galaxy S9+ at all times. There's an 'eco-mode' toggle in the Settings, but I'm not quite sure what it does as the game looked the same with it toggled on. My device did heat up a little after about 20 or so minutes of continuous gameplay, but that happens with all games. The Mighty Quest for Epic Loot is relatively light on the system's resources and should run smoothly even on low-cost and mid-range devices.

The basic premise of The Mighty Quest for Epic Loot is to defeat enemies across ten 'acts'. Each act consists of ten individual 'castles' (except for the first one) where you have to defeat mobs of enemies, while the last castle of each act is a boss fight which pits you against a 'keeper'. The strength of your character is determined by its 'Might'. Entering each level consumes 'energy', which regenerates over time until it reaches a maximum. That maximum energy you can store increases as you level up. On a similar vein, your Might increases as you level up and acquire better gear. Getting your character's Might up is rather tedious for F2P players. You can use 'auto-win' tokens to reap the rewards of completing a previously finished castle (without actually playing the game) There is an eleventh floor which can be unlocked by, you guessed it, paying money. At the very least, the game has a healthy dose of side content that'll keep you engaged for a little while at least. Be prepared to play the same levels multiple times over because beating a level that needs higher Might than what you currently have is nigh impossible.

The combat is very repetitive, but you can mix things up a little by using a specific combination of skills and talents. For example, there is a skill that pulls all enemies in the area towards you. Couple that with another skill that deals damage in an area, and you have a deadly combo right there. The game throws a wide range of enemies at you, so you'll need to switch things up from time to time. Honestly, the variety in the enemies is what pushed me to keep playing the game. Watch out for the kamikaze spiders and avoid them all costs. There's one combat mechanic about the game that I particularly liked. The in-game volume gets dips in magnitude in sync with your health. If you're on a sliver of health, the in-game volume will be virtually inaudible.

One can engage yourself with side content such as Trials and Challenge Castles for when one runs out of energy. There's even a PVP mode which matches you against three players of similar Might. PVP mode has a different 'energy' system which allows players a paltry three games per day. You can, of course, pay to unlock additional games for that sense of pride and accomplishment. The concept of an online community is non-existent. Your only interaction with other players is in the form of a global chat that lets you talk to other players and show off your gears. The game doesn't let you add other users as friends, chat with them or challenge them to duels.

There are six types of items that can be equipped, namely weapon, head, armour, gauntlets, shields and pants. Each item has two degrees of classification. The star rating of gear determines it's base might. The lowest is one star, and the highest is six stars. Apart from a star rating, each piece of gear can be levelled up by using 'fusion orbs' or other pieces of gear. Depending on the star rating of the gear, the maximum level can range from anything between ten and forty.

Additionally, gears can be fitted with runes that provide further benefits such as increased DPS and HP. It is easy for first-time players to get overwhelmed, just looking at the sheer volume of factors at play. Then there's the concept of chests, orbs and promotion stones but let's not get into that. There is a lot going on, and while the game does a decent job of explaining what's what, it may put a lot of players off. Now, let's get to the fun bits. The Mighty Quest for Epic Loot has two types of currency; gold and diamonds. Gold is plentiful and can be earned by completing quests, challenges, etc. Diamonds are the game's 'premium' currency and can be bought with real money. Completing each level for the first times gives you all three diamonds. Similarly, completing challenges and unlocking achievements awards diamonds as well.

If there's one thing The Mighty Quest for Epic Loot is full of, it's monetisation elements. Running low on energy for campaigns, get an energy pack. Running low on auto-win tokens, get an auto-win token pack. I get that game development costs money and companies aren't doing charity, but The Mighty Quest for Epic Loot takes the concept of in-app purchases to a whole new level. There are 'packs' that give you a lump sum amount of a thing daily and a lesser amount daily for a week/month, there are diamonds that you can use to purchase gold, keys, and tokens. There is also a season pass that 'unlocks' some premium content and missions and there are sets of items that boost your might and help you get through the game quicker.

Can't/don't want to pay? Be ready to look at ads, lots of them. Got something good from a free chest and want two of those? Look at an ad. Out of energy and want to play another level? Look at an ad. Even though Ubisoft was kind enough to give me a code that helped me cruise through the game faster, I had to look at a ton of ads on more than one occasion. This is one of the least F2P-friendly titles I've ever seen and trust me, I've seen a ton of those in the mobile gaming space. Most of the games that feature in-app purchases at the very least let players grind for the gear. The Mighty Quest for Epic Loot is designed in such a way that even grinding does little to progress your character after a certain point. I'm a little over three weeks into the game and have managed to advance three-fourths of the way. I don't see myself completing the game on Normal difficulty for at least another month or so.

All things considered, I did enjoy playing The Mighty Quest for Epic Loot. The gameplay does get bland and repetitive at times, but I managed to keep things fresh by mixing up different types of gear, skills, and talents. It is one thing if a game is difficult by design and encourages players to 'Git Gud' and its another if the devs artificially impose it for squeeze out more money. Oh, and the icing on the cake is that you can't play the game offline. I'm conflicted about recommending the game to anyone, but if you want to give it a try, head over to the Play Store and App Store. Take a look at some gameplay footage and decide for youself.

Reviewed on a Samsung Galaxy S9+ on a beta version of the title. 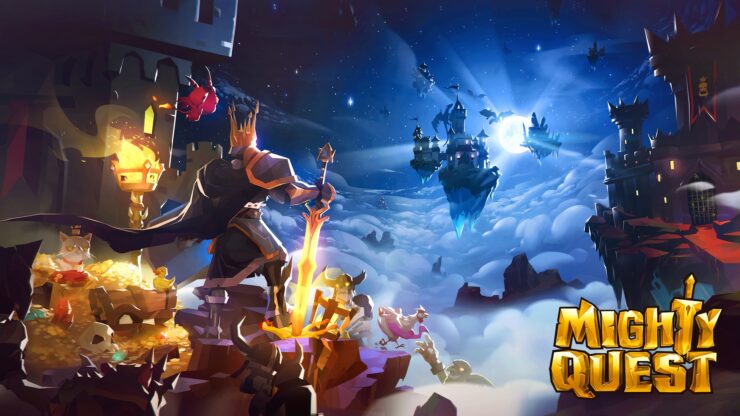