It does not take long for Matterfall to remind you it was created by the same team behind Resogun (not to mention the recent Nex Machina), the Finnish studio Housemarque. While the first few levels are an excellent introduction, the game soon shifts into high gear as the screen fills with enemies, particles and chaos. It's great fun.

Resogun’s legacy as a 2D side scrolling arena shooter is evident from the very beginning, where you were expected to dodge and weave between the enemies and ammunition in your fairly nimble spaceship. Matterfall takes away the ship but leaves behind the enemies that frequently spawn all around you, and although your feet won’t often touch the ground, you aren’t quite as maneuverable as you were. The early levels, after a brief introduction to mechanics really show the player the importance of movement in Matterfall. In fact, it's not just important but necessary to survive. If you have any hope of surviving most encounters you’ll have to make use of a movement ability that stuns the enemies around you. This makes it imperative to get stuck right into the fight, leaping between essential targets and opportunities to break through the spawning hordes. 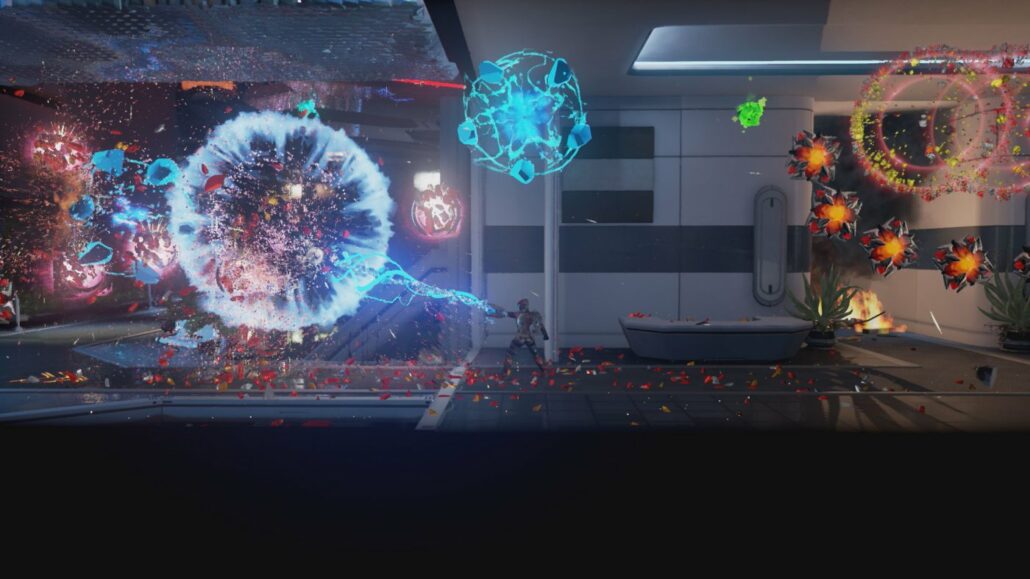 It can feel a little fiddly and hectic at first, but once you’ve memorized the cooldown and have your fingers as focused as possible, Matterfall becomes an extremely satisfying game. The learning curve is gentle enough to not punish the player too much initially, but by the late game, you’ll be fighting swarms of hostiles that leave little room for error. And when you overcome what seemed like an impossible fight in a stylish display of agility and accuracy, Matterfall will throw the next wave at you even stronger.

But unlike Resogun, Matterfall isn’t an arena shooter. You’ll be blasting your way through corridors, farms, rooftops and mines and always progressing forward. There’s a little room to explore if the mood strikes you but you can’t travel far off the beaten path nor do you really want to. This is a really well-paced game, and you’ll be itching to get into the next fight the second you clear the previous one. Unfortunately, the same can’t be said for the bosses. While the final fights in Resogun where monstrous affairs with complex attack patterns, Matterfalls final enemies feel a little flat in comparison. Their attacks are simple and readily telegraphed, and they just don’t impose the same threat you might expect from the studio that brought you a massive wheel of death. It’s not that they are boring per se, but they seem far less interesting than a good swarm of enemies and bullets from the previous levels. They are by no means the worst part of the game either, that honor falls to a different section. 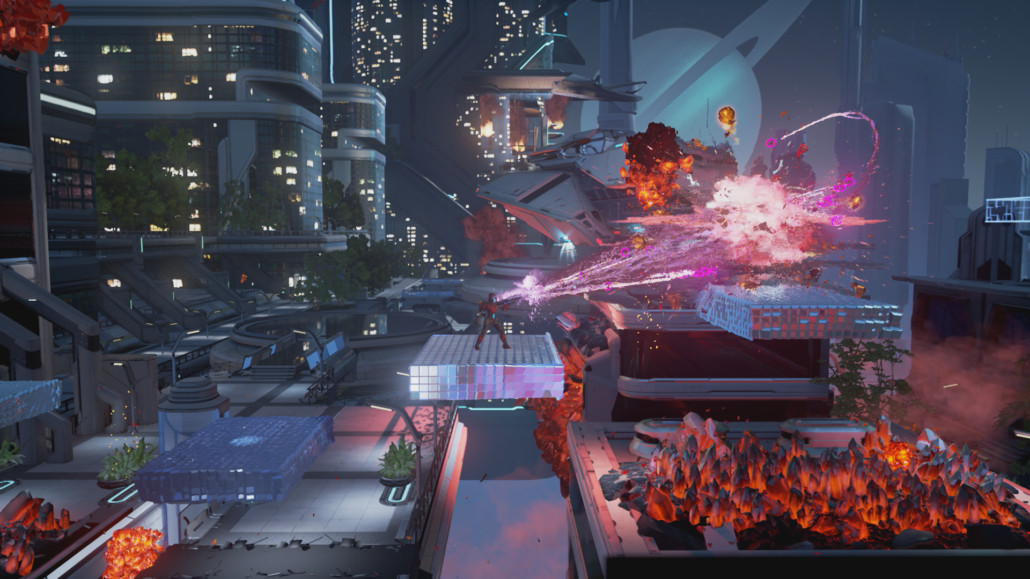 Like nearly all 2D shooters, Matterfall devotes at least some of its time to platforming, but the mechanics don’t so easily blend. Trying to weave between slow moving and awkward bullets as you leap from ledge to ledge just doesn’t feel satisfying, and with your relatively low health, these sections can become frustrating very quickly. Outland did a good job of combining bullet-hell like situations with some really sturdy platforming but Matterfall doesn’t quite capture the right standard and each moment where you have to stand and wait to jump ruins the oh-so-satisfying flow of the level.

But these sections appear infrequently, and the game as a whole is a strong, confident shooter. For the most part, it knows what it is and what you expect out of it. There’s no narrative outside of the opening dialogue that tells you what to shoot at, nor is there a host of side objectives to distract you.

And with its simple controls and stylish fights, Matterfall is a game that dares you to beat it. Playing through on the equivalent of normal difficulty, I found the game challenging but manageable, I also found that I really wanted to play it on hard. I wanted to beat this game, to use its mechanics against it, and prove to it and myself that I could. Hard reduces your health greatly so you’ll have to know exactly what you’re doing to get far, but that makes it even more tempting. 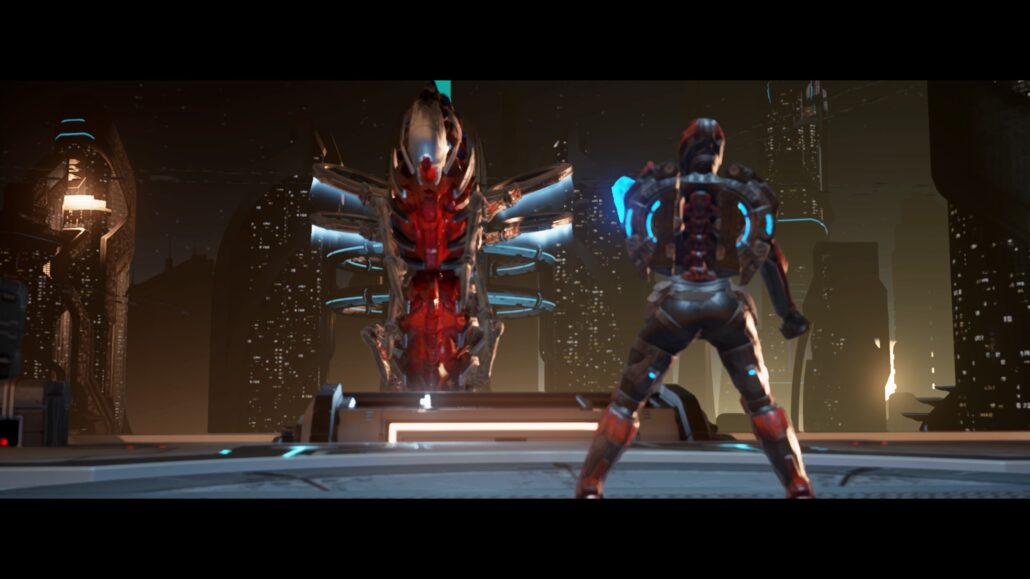 Matterfall presents itself as next to impossible but actually teaches you how to get the better of it. Its challenge is never so overwhelming that you think it is unwinnable, yet when you do overcome a section you struggle on, it feels glorious.

For anyone that enjoyed Resogun, or in general enjoys a game that feels like a real trial of your skills, Matterfall comes highly recommended.

Matterfall is a challenging game with simple controls and stylish combat. While some sections are more frustrating than others, it'll keep daring you to come back and try to beat it once and for all.

Interview with Ilari Kuittinen and Mikael Haveri from Housemarque on Epic Games Store, Stadia and more