The Mario Strikers games have always stuck out amongst the plumber’s various athletic outings. While most Mario sports titles follow a tried-and-true formula – simple arcade action with a handful of somewhat superfluous Nintendo touches – Strikers offers dialed-up intensity and complexity served with a heaping dose of 2000s-era ‘tude and a rockin’ soundtrack. The franchise has been missing in action for 15 years, but the hiatus comes to an end this week with the release of Mario Strikers: Battle League and Canadian developer Next Level Games seems to be picking up right where they left off.

While the series’ dedicated fans are no doubt eager to get playing, is Mario Strikers: Battle League a championship-worthy return to the pitch? Or should Mario have kept his cleats in storage? Time to see just how beautiful this particular game is… 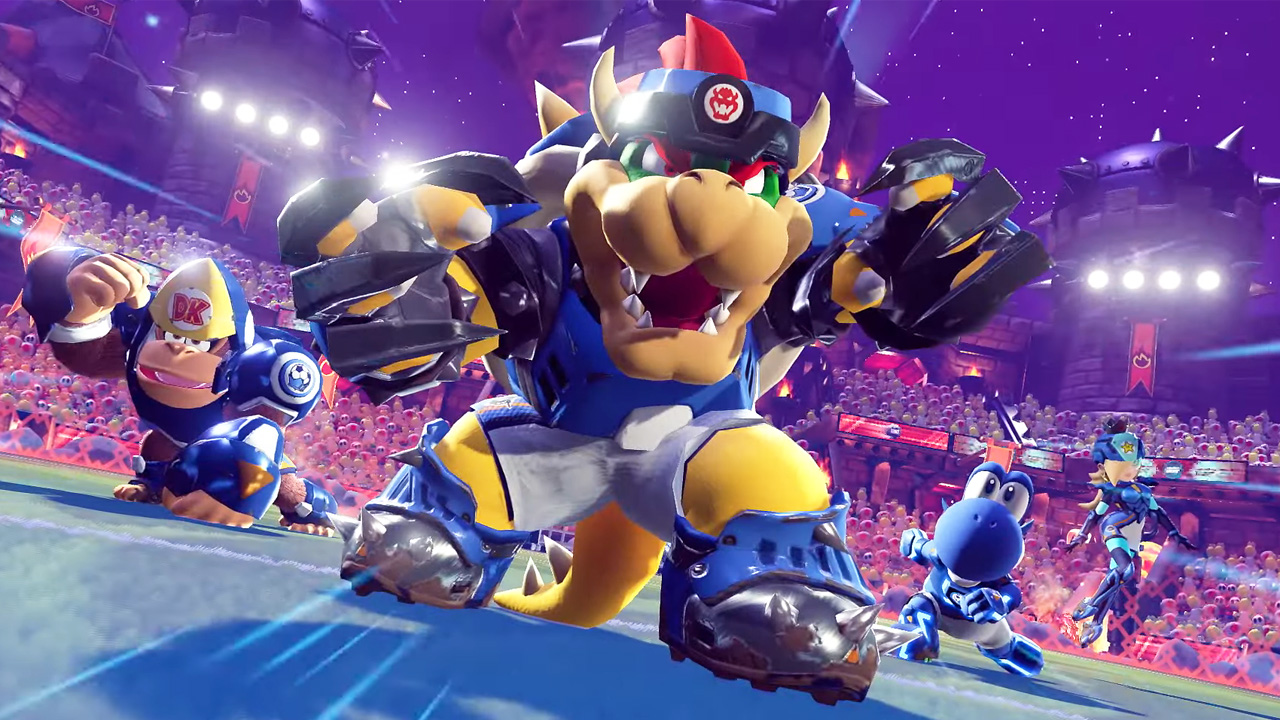 If you’re new to this franchise, you may be taken aback by the depth of Mario Strikers: Battle League’s core mechanics. This is a game with a tutorial that takes nearly an hour to play through, and you really should set aside the time to do so if you want to be competitive against other humans or the AI (which can be surprisingly tough). The game offers an array of passes, tackles, shots, and other moves, that all mesh together in a pleasing, well-balanced way. A few new techniques have been added, including team tackles that allow you to send your own player hurtling down the field, but for the most part, the action feels familiar. Even without the Nintendo accouterments, this would be a solid game of arcade footie.

But make no mistake, those accouterments are there, and better implemented than in most Mario Sports titles. The game’s power-ups, ranging from red shells to Bob-ombs, are comparable to the ones in Mario Kart as they’re let loose frequently and really have the power to change the course of matches. Battle League’s new Hyper Strike system is essentially an evolved version of the Mega Strikes from the previous entry in the series, with players being able to launch a powered-up shot if their team collects a randomly-occurring Smash-Ball-like orb. Each character has their own Hyper Strike, which will affect your rivals in different ways – Peach’s puts opponents into a heart-eyed stupor, while Luigi sweeps everyone up into a green tornado, to describe just a couple. Hyper Strikes are arguably a bit overpowered (you get two points if one makes it into the goal) but you’ll only occasionally get to launch one during competitive matches. 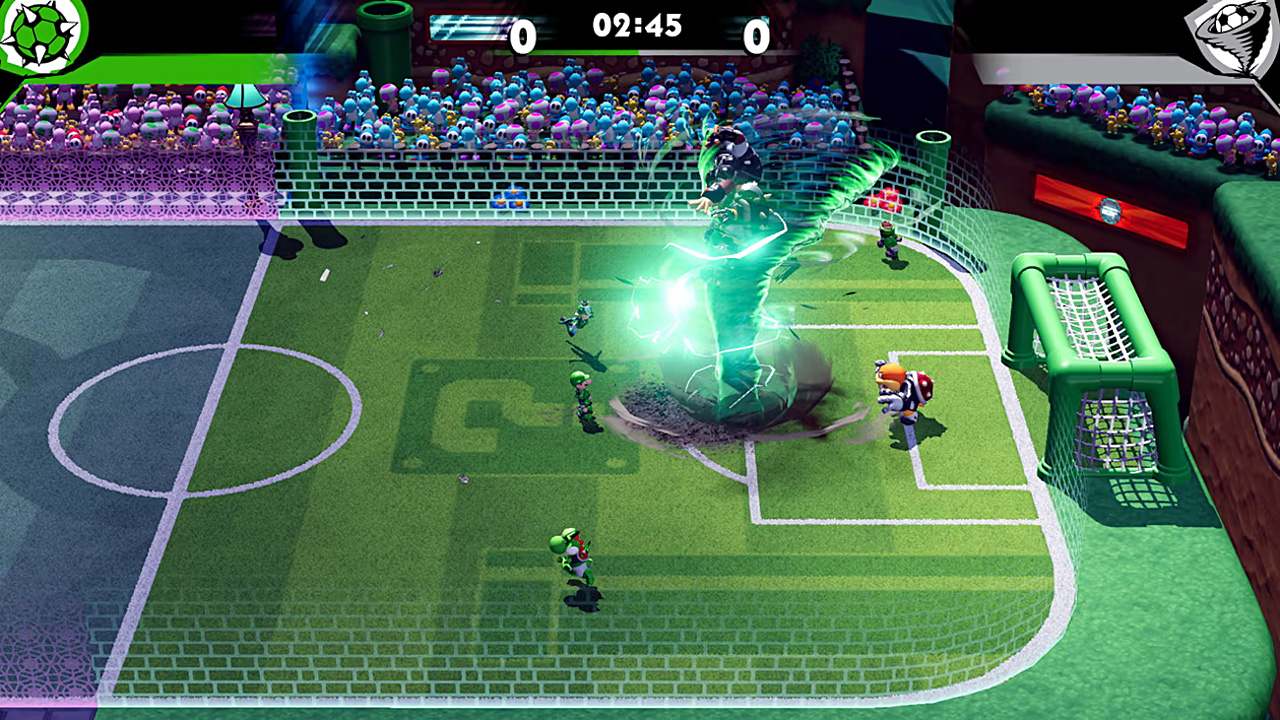 The on-field action can get intense, with Next Level Games’ knack for expressive character designs and animation really bringing the competition to life, although in some ways Battle League actually dials things back a bit compared to previous games. Arenas with unique gameplay effects are out, with every field now playing exactly the same, and the various “cheats” from Mario Strikers Charged that allowed you to set unique parameters for matches are also gone.

Overall, Mario Strikers: Battle League has an issue with content. The game launches with only 10 playable characters, which is particularly noticeable given the captain-and-sidekick system of past Strikers games is now gone. In the past, players picked one unique captain and were then backed by three identical teammates (Koopa Troopas, Toads, ect.), which allowed the Strikers games to stretch the limited number of available Mario characters further. Now your team of four is composed entirely of “name” characters, meaning almost every match will see you facing off against one or more mirrors of characters you’ve chosen. Not only is this kind of lame, it also has a negative effect on gameplay, as it can be difficult to differentiate between your team and your opponents when you may be sharing two or three characters. 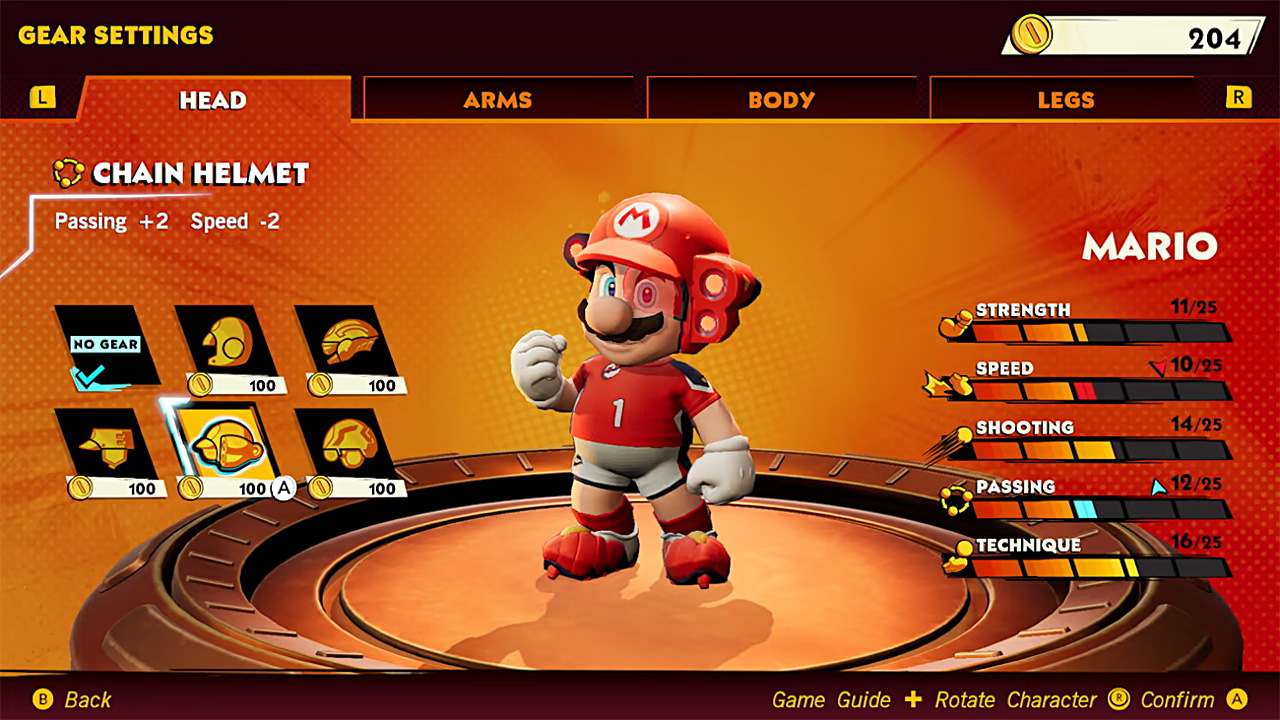 And Battle League’s general lack of stuff doesn’t end there. The game only has 5 stadiums (Mario Strikers Charged had 17 that actually affected gameplay). There are only 6 power-ups (Charged had 10). Challenge mode is gone. You don’t even have the basic ability to view your records! At least Cup Battles return and there are a few more options for local multiplayer, including the ability to play with seven other folks on a single Switch, although adding too many players to the mix makes the action too hectic and hard to read. Nintendo has promised free content will be added to Battle League post-launch, but this is a case where delivering more of the goods upfront would have been preferable.

It seems like Next Level’s main focus was on the Battle League’s new character customization and Strikers Club online ranked mode, but I can’t say either is that compelling. There just isn’t much gear to equip your characters with and all items come with both benefits and drawbacks. That new headgear or pair of boots may make Mario stronger, but it will also reduce his speed or shooting skill by an equal amount. Gear can change a character’s abilities, but it can’t actually make them better. Strikers Club is also limited in its options. You can only belong to one club at a time and your only reward for climbing the rankings are more choices for customizing your arena, which isn’t that exciting considering they’re purely cosmetic. Generally speaking, Battle League’s online play feels fine, although in my experience, there was notable lag when playing against those with so-so connections. 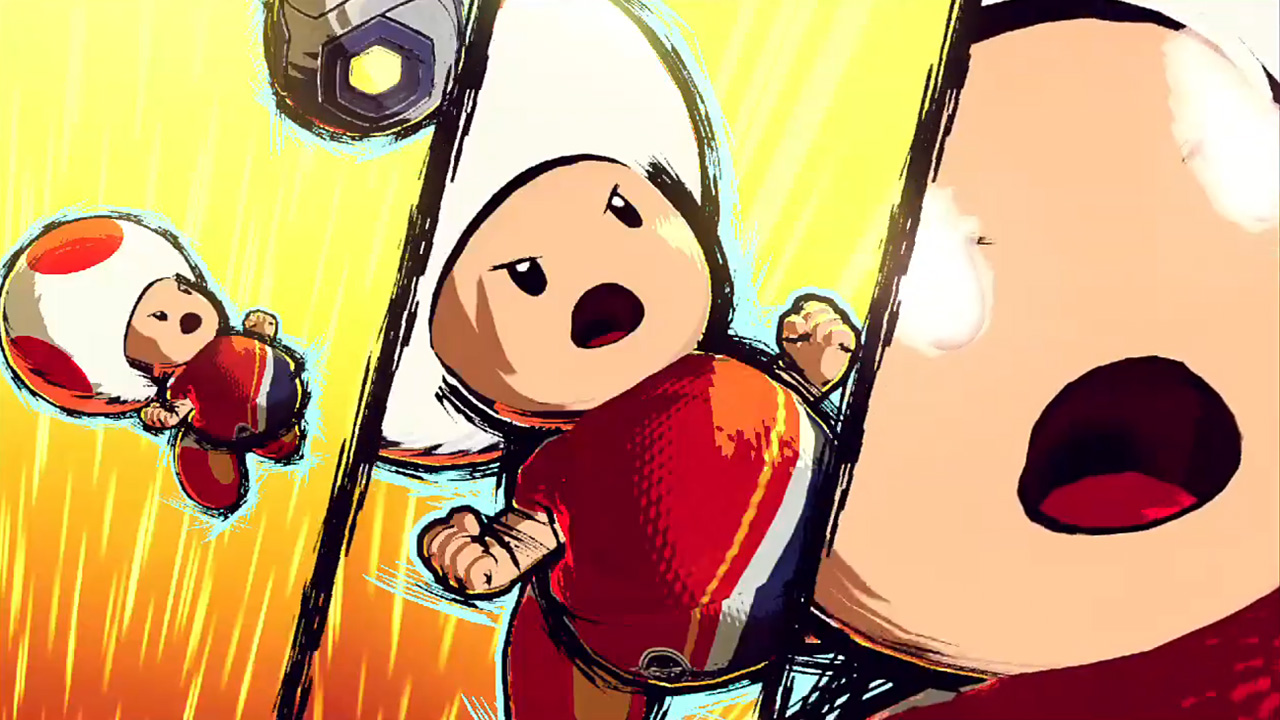 Don’t get me wrong, Mario Strikers: Battle League is fun, but it’s hard to shake the feeling that, much like the recent Nintendo Switch Sports, the game was largely designed to encourage Nintendo Switch Online subscriptions rather than truly push the series forward. The game makes a great first impression, but the excitement wears off once you realize it doesn’t have the content to keep playing hard into extra time.

This review was based on a copy of Mario Strikers: Battle League provided by publisher Nintendo. You can pre-order a copy of the game here.

Mario Strikers: Battle League delivers the frantic fun the franchise is known for, but it feels like it’s only fielding half a team. It’s hard to overlook the missing characters, stadiums, modes, and mechanics from previous entries in the series, and new online and character customization options aren’t fleshed out enough to make up for what’s been left behind. Battle League will likely be worth it for hardcore fans with a good collection of friends to play with online or locally, but those hoping for more may find the game drifts just wide of the goalposts.