LG has been quietly working on a projector that, on-paper, aims to take the industry by storm. When we received the LG HU810PW (well, technically the AU810PB) sample in our lab, we couldn’t have been more excited to review it. You see, LG’s HU810PW isn’t like other DLP projectors – for it contains no color wheel and uses an entirely laser-based system that produces a 100% color lumen output of 2700 lux. With the base variant priced at an affordable $2999 and equipped with True 4K resolution, this is shaping up to be one of the best offerings we have seen in a very long time.

The LG HU810PW and AU810PB are some of the first projectors in our lab with HDMI 2.1 support with eARC (32 channels of audio, 24 bit, 192 KHz, Atmos support). The projector supports 12 bit color on YCBCR 4:2:2 (the native format for Blu-rays and most television content) and 10 bit color for RGB 4:4:4. It features a stunning DCI P3 97% color gamut (when calibrated) and one of the largest native contrast ratios we have ever seen thanks to its laser engine. All in all, it punches far above its weight class based on the on-paper specifications so let's see how it performs in real life. 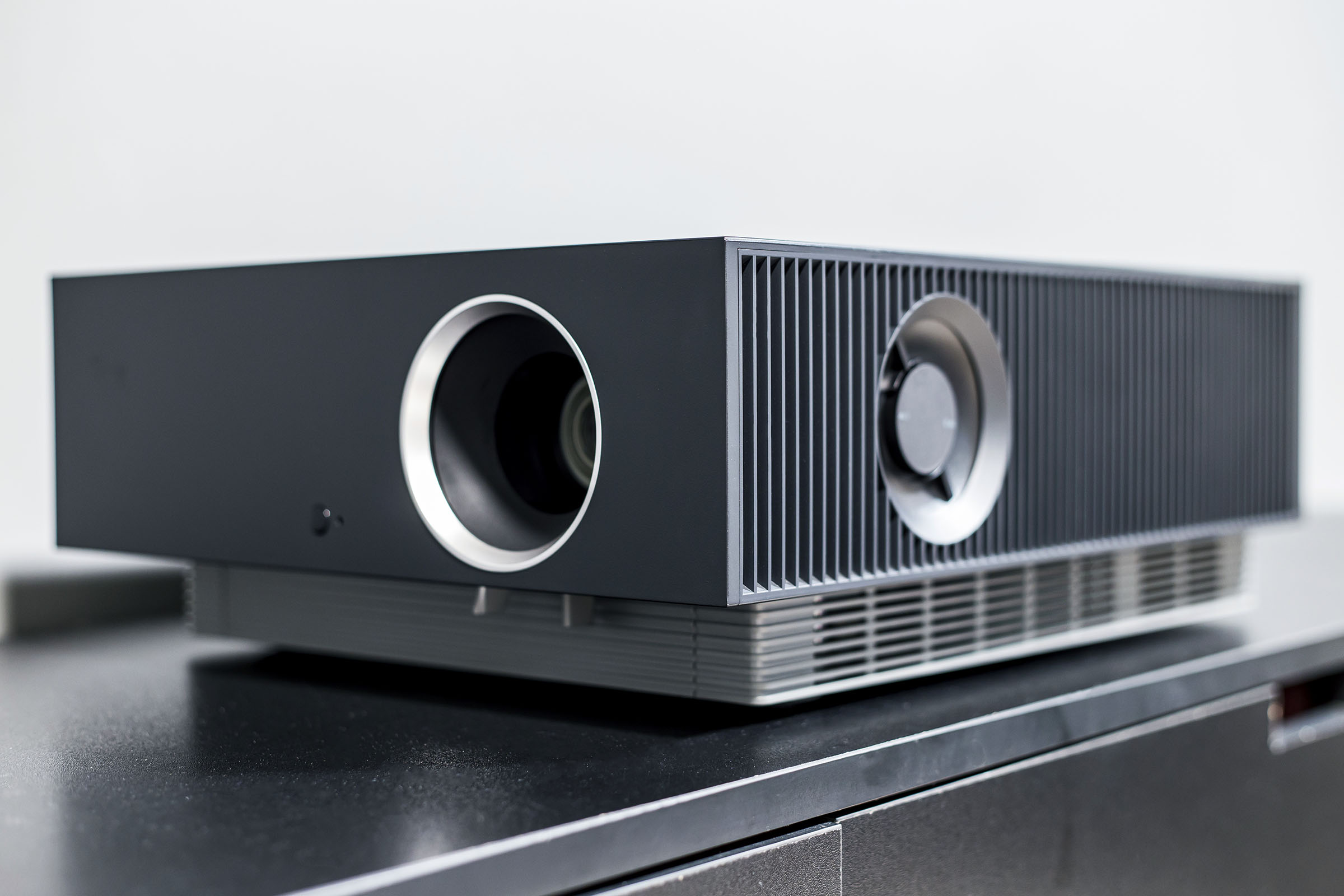 While most DLP projectors (the vast majority of projectors in the mainstream segment) have a light source that lasts, at most, 5000 hours, LG is using a laser light source that will last for at least 20,000 hours. Not only that but while other vendors use a single laser source passing through a color wheel, LG instead relies on a dual-channel laser system (which houses two lasers - a blue and a red one) for this particular projector. The red and blue lasers output their respective channels and the blue laser can also be passed through phosphor to produce pure green light.

The result? virtually all of the lumens here (in theory) are color lumens. The difference between white lumens and color lumens is a very important one when it comes to judging color quality. You can crank DLP projectors up to fairly high lumens, but since they have a white light source passing through a color wheel  (which is just a combination of color filters) you find out that colored lumens are a fraction of the total lumens. This problem is something the 2-channel laser system attempts to solve. It also mostly eliminates any rainbow effect (which is prevalent in color wheel systems). In our testing, the LG HU810P and AU810PB had the lowest rainbow effect of any DLP we have ever tested. That said, if you are watching a very very high contrast scene (think black and white movies) and you try really hard - you *can* see some RBE. 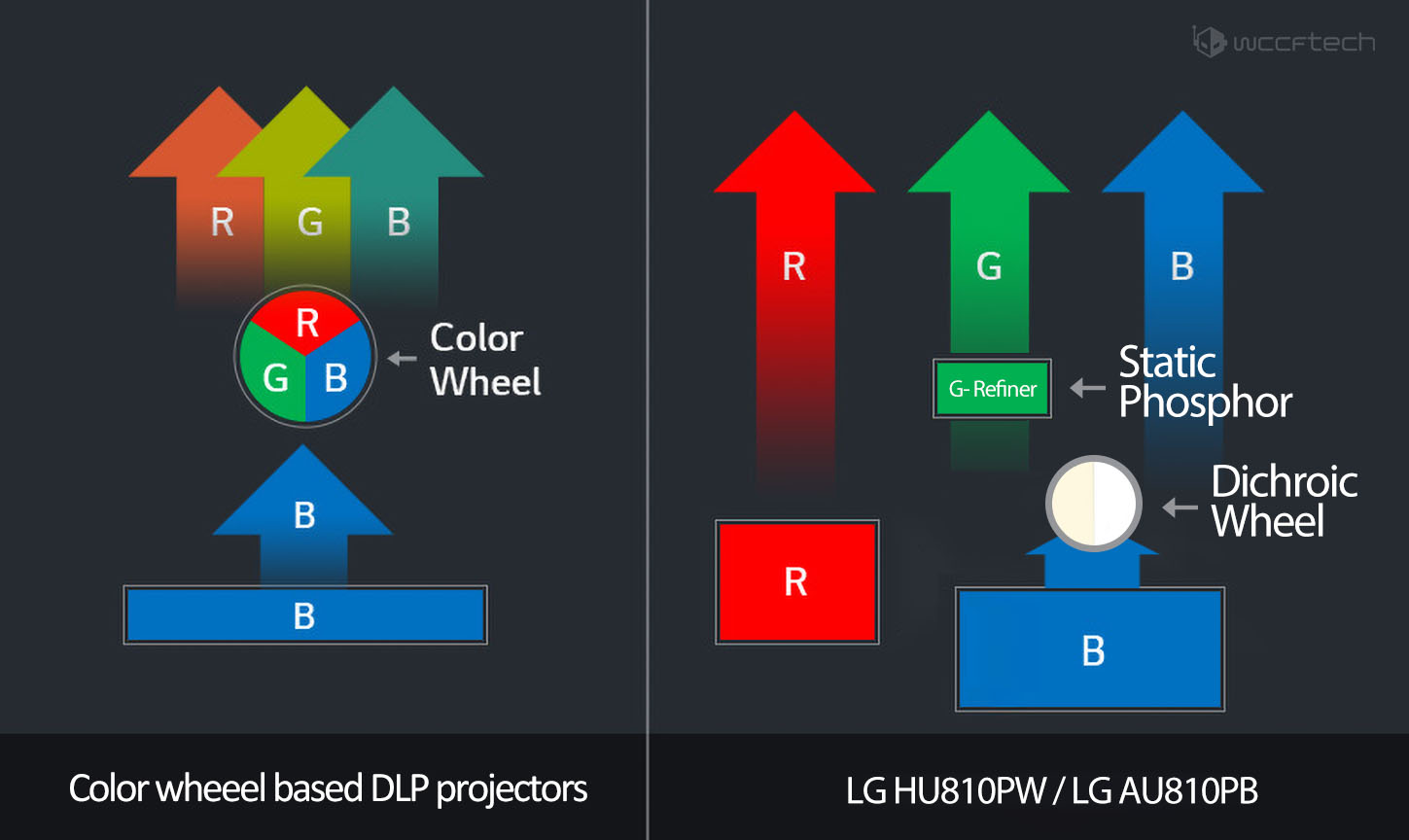 A diagram we made after talking to LG engineers on how the laser system for the HU810PW/AU81PB works. For illustrative purposes only.

The projector is powered by a Texas Instruments 0.47" DMD XPR chip. For the uninitiated, the XPR chip is able to offer true 4k resolution with the true resolving power of 4k pixel grids or 8.3 million pixels on-screen. This is different from PRO-UHD/4k-enhanced variants of XPR which cannot project a true 4K image (up to 4.1 million pixels). It sort of works like how CRTs of old used to function (with progressive lines being scanned on the monitor and your brain making them into a single image). Just so I am absolutely clear about this, this is real 4K, unlike 4K enhanced/PRO-UHD projectors which just project a sharpened 1080p native image without actually projecting 4k pixels.

It is worth noting at this point that the LG HU810P and AU810PB utilizes a first-generation XPR DLP chip which famously has a light-border (think BenQ HT 2550). This is not really an issue if your projected image fits your screen (as you can simply zoom in the image till the light border vanishes into the screen border) but could be an issue if you plan to project on a bare wall or a screen that does not have dark borders. It also means that the actual throw distance will be slightly longer than advertised as you will have to zoom in more to get rid of the borders.

The laser system used by LG is the cutting edge ALPD 4.0 which comes with one big improvement over ALPD 3.0: adaptive contrast. This is tech that analyses every frame being projected and dynamically adjusts the laser output for incredible contrast ratios. In fact, with all "dynamic" features turned on, both the LG HU810PW  and AU 810P are capable of achieving a dynamic FOFO contrast ratio of 2 million to 1. The same tech applied to HDR turns into dynamic tone mapping where every frame is analyzed for optimal light output. Frame by frame analysis is a feature that is usually not present in projectors in this price range and reserved for expensive projectors like the JVC NX5 or NX7 (which are more than twice the cost of the LG). 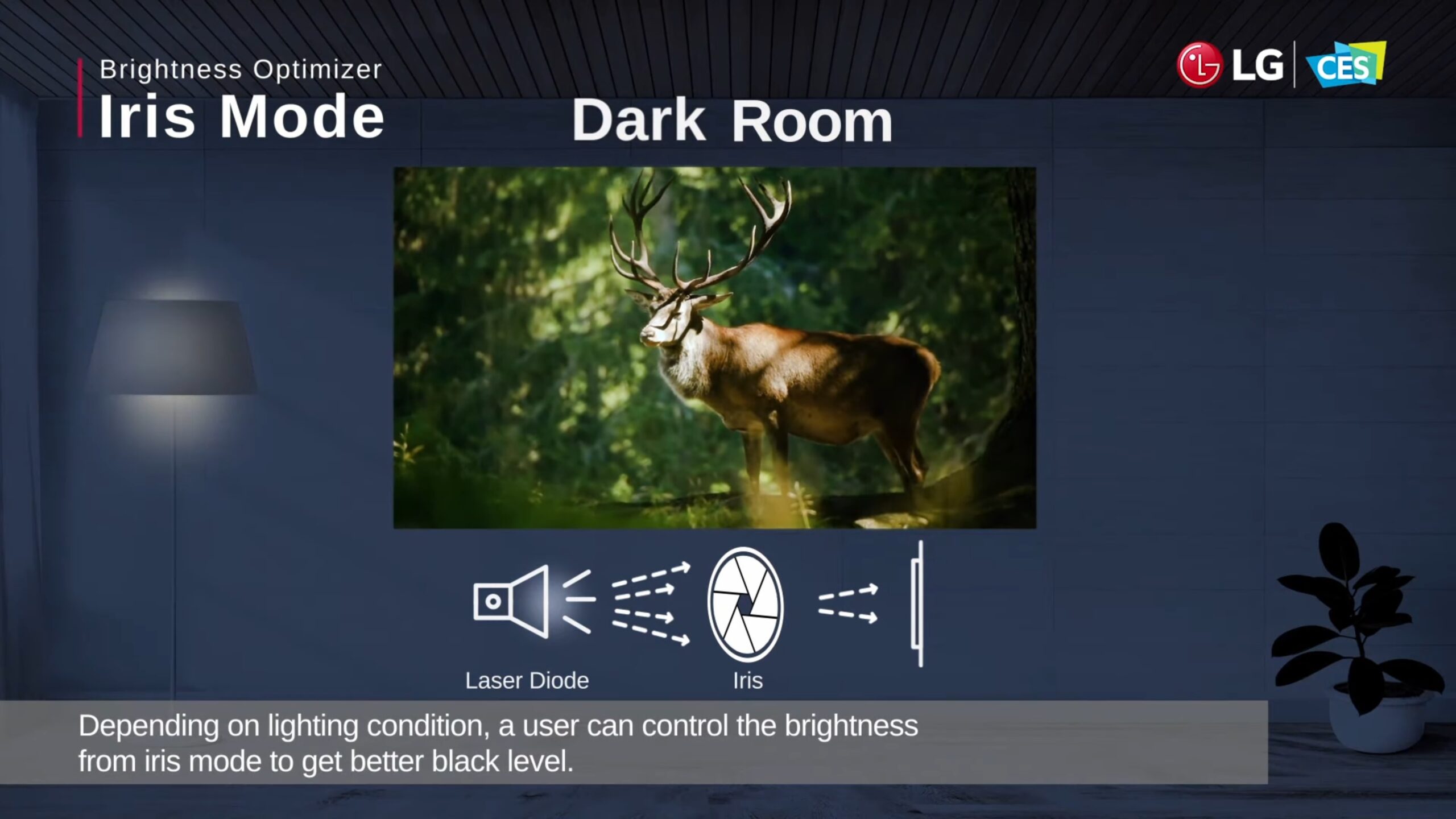 The LG HU810PW and AU810PB are not factory calibrated and the image will have a strong green cast that will need to be calibrated away before the projector can be used. That said, calibrating away the green cast for close-to-perfect calibration is trivial and does not require any advanced tools. In our testing, setting the color temperature to warm and setting green high and low points in the white balance setting (Expert Dark Mode) to -27 got rid of the green cast. Our preferred settings were using an iris value of 5, contrast at 100, color at 80, sharpness 0, tint 0, brightness 50, all image corrections and noise reductions OFF, adaptive contrast set to high, dynamic contrast off, color gamut auto and an input source of YCBCR 4:2:2 at 12 bit (+ gamma correction against a reference scale).

Please note that this is not the setting with the deepest blacks - but is the one that looks the most pleasing to the eye. For deepest blacks (at the cost of reduced highlight performance), you can retain the settings above but change the iris value to 0. Similarly for TV-like viewing, you can change gamma to 1.9 (from 2.2), iris value to 9, dynamic contrast to high. 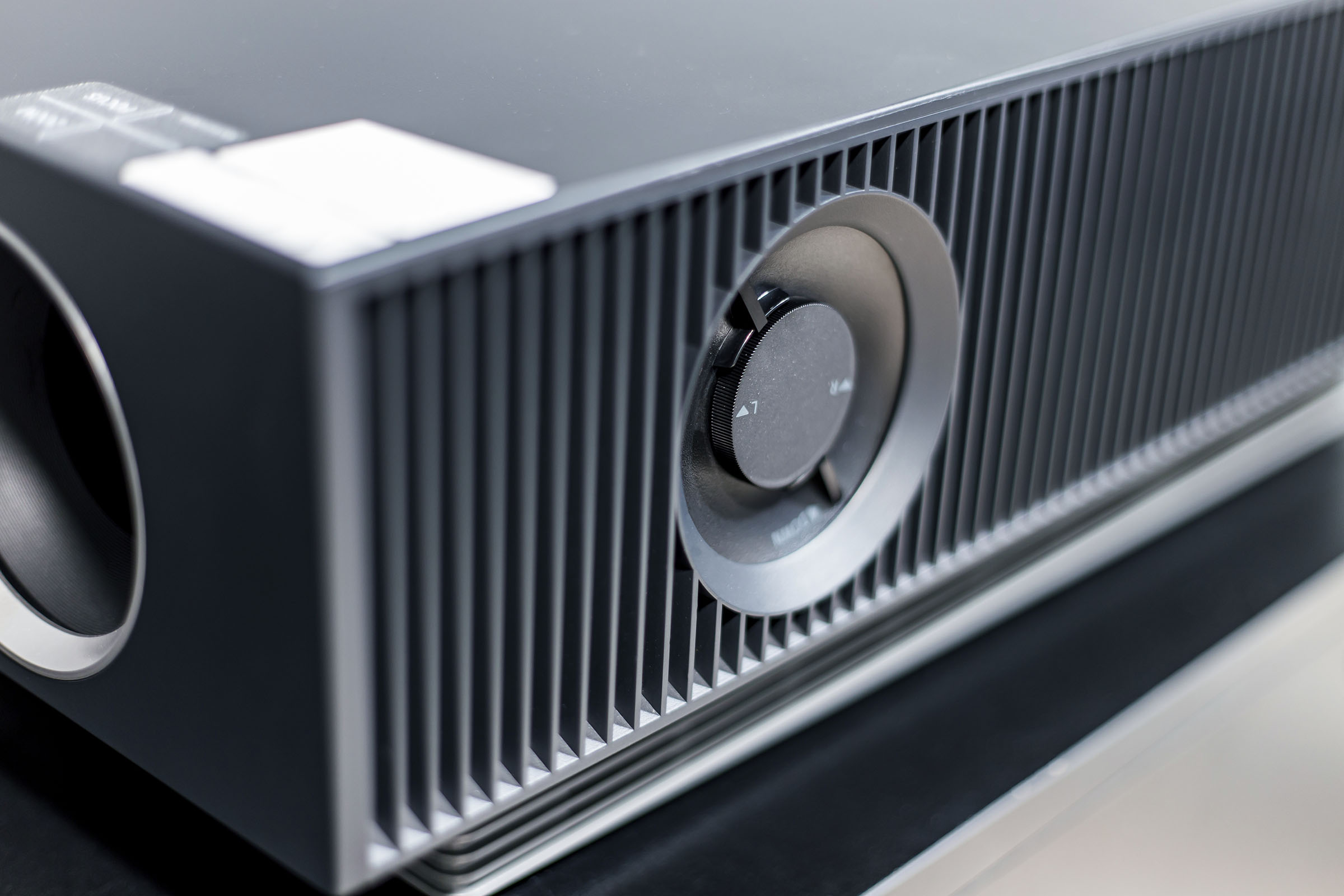 The LG HU810PW and AU810PB have one of the best image positioning systems we have seen in *any* projector to date. It features both horizontal and vertical lens shift with an absolute ton of flexibility. On our 150 inch projection, the entire image could be moved 50% in any of the 4 directions. Combined with the screw legs, this LG will be an easy setup in any home theater. As for the difference between HU810PW and AU810PB, the latter is the custom installation variant that supports Calman Auto Calibration (for a reference class laser image) and some other bells and whistles like 5.1 channel WiSA support and RS232C, IP Control availability.

The versatility of the calibrated performance of the LG HU810PW and AU810PB is something I have never experienced before. At your whim, the projector can turn into a dark room projector with pitch blacks and the next second it can offer TV-like super vivid and bright viewing experience with 200 nits at a 150-inch image. There is so much flexibility in this offering from LG that we have been testing this guy for a little over 1 month and *still* are not sure if we have the most optimal configuration down pat.

Most of the lamp's actual power seems to be dictated by the contrast setting. By keeping it at a high 80, we saw that the relationship between the iris values and blacks was completely nonlinear. Increasing the value to 90 or even 100 increases the max lumen count drastically but does cause some highlights to get blown out if Iris is set to anything above 3-4. That said the graph below shows the "worst" case and a contrast setting of 100 is perfectly usable at iris values below 3 if you want pitch black darks with almost no light leak. 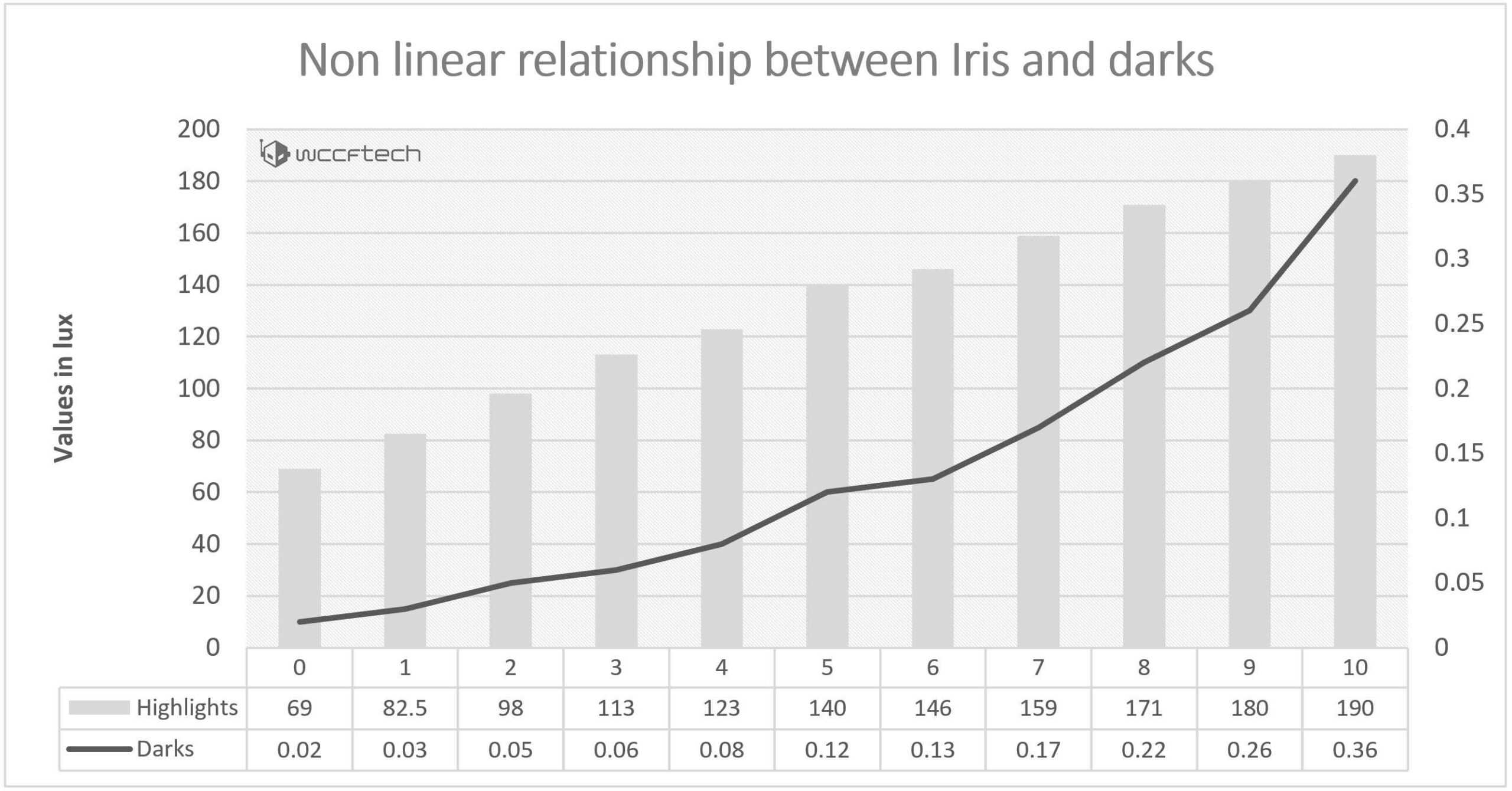 All values taken at contrast: 80. Increasing contrast will increase peak brightness without impacting blacks. A contrast value of 100 is feasible at iris 0-3.

An iris level of 0 provides perfectly deep blacks and dark scenes are incredible to look at. Highlight performance is sacrificed a bit as the peaks fall below under 100 nits but the fact that the LG HU810PW and AU810PB achieve an almost 100% brightness uniformity means that it is a perfectly acceptable image for all intents and purposes. Increasing contrast to 100 at iris = 0 adds another 10 nits to peak brightness. In our tests, iris =1 at contrast 100 offered the best cinematic performance. The best "looking" performance was at iris=5 and contrast 80.

That said the projector's highlight performance is absolutely breathtaking to look at and likely one of the best in the world - if not the best. With a fully open iris, the daylight scenes of Tenet would blow any user away with an immersion level that is unparalleled. This is one of the reasons why we think a dynamic iris would make this a JVC killer. The projector is clearly capable of both deep blacks and mind-blowing highlights, and a dynamic iris could enable just that. 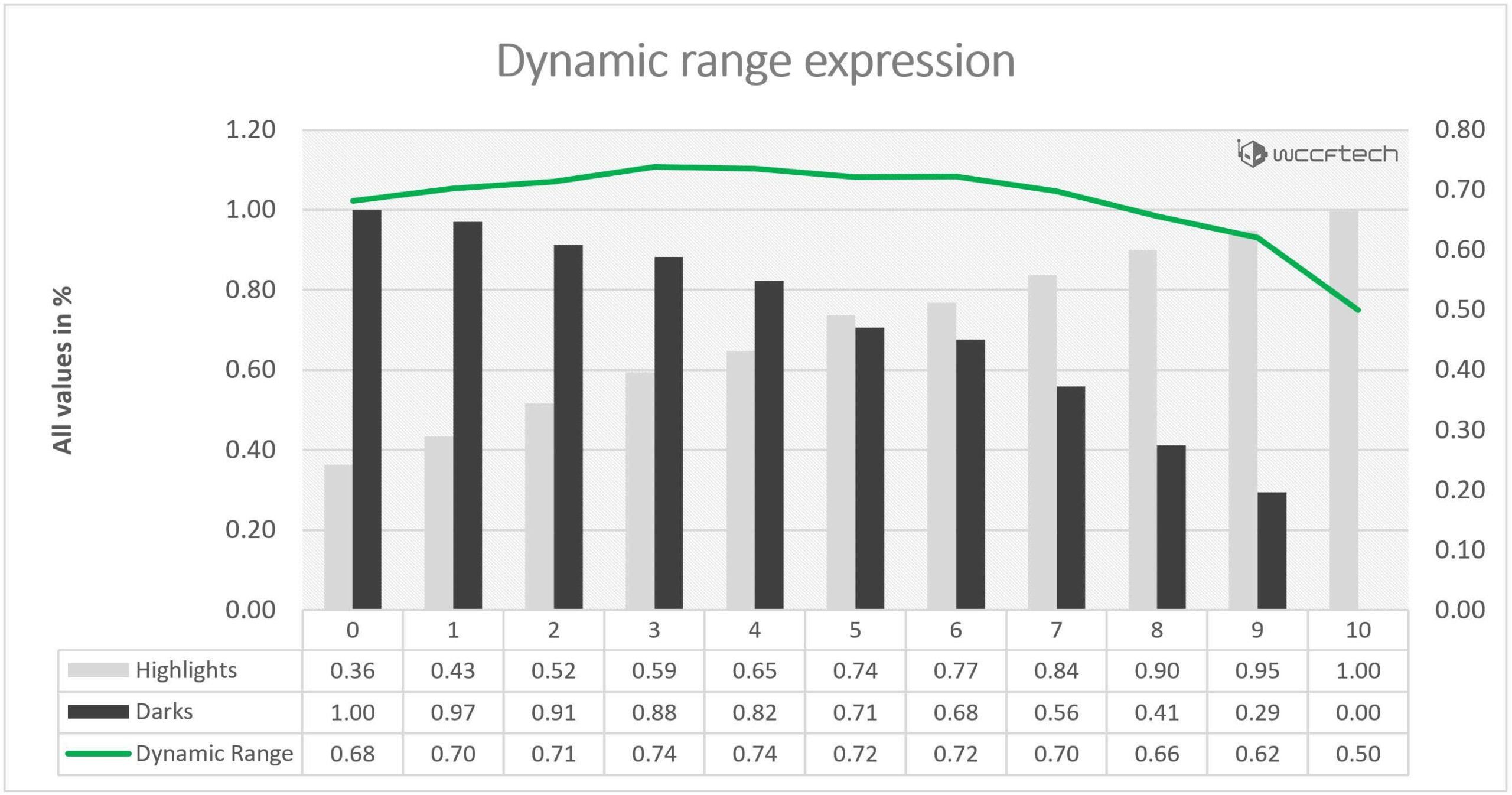 All values taken at contrast: 80. Increasing contrast will increase peak brightness without impacting blacks. A contrast value of 100 is feasible at iris 0-3.

We also took the liberty of calculating dynamic range expression as a normalized percentage of the maximum black and white values and as expected, it peaks at iris=3 and falls off dramatically after iris=6. This is obviously the reason LG's default cinema mode is set to iris = 3. To capture some of that gorgeous highlight performance, however, we would suggest opening the iris just a bit more to 5 for an optimal viewing experience. Purists should stick to iris = 2. Watching casual comedies at iris = 9 is an absolutely TV-like experience that I have never seen any other projector (bright or otherwise) offer. The fact that color depth is actually maintained throughout all iris values instead of getting washed out is a testament to LG's laser technology.

LG's incredible contrast and highlight performance are clearly visible in these images - although pictures clearly do not do them justice. 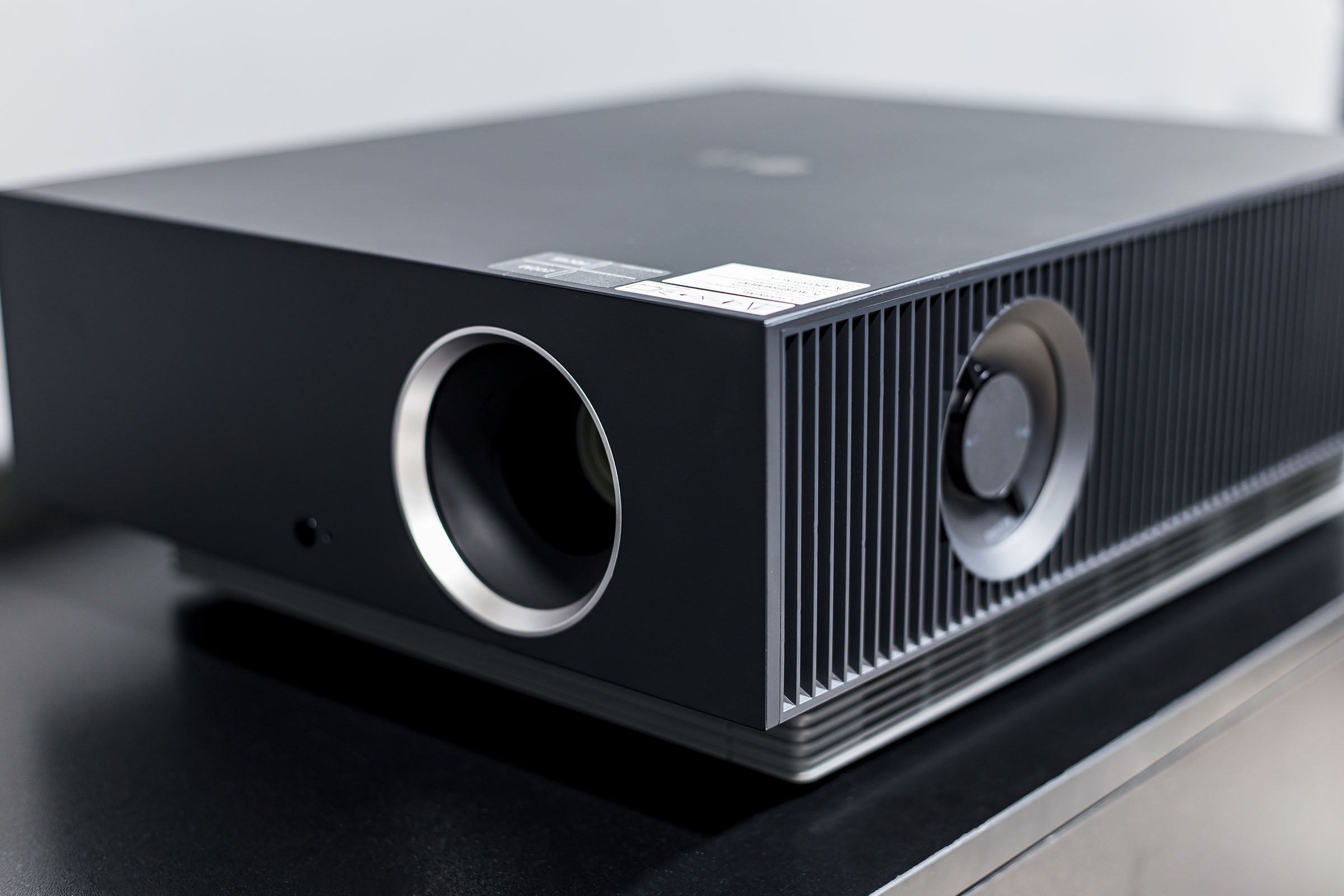 The LG HU810PW and AU810PB are a masterclass in innovation that blew us away with the level of versatility offered. This is the first time we have seen a projector where you have actual control over the color lumen output and can tweak and tune to your heart's content. Want an incredibly bright, TV-like image? sure. Want a pitch-black cinematic experience? it can do that too. Have an ideal dark/highlight ratio in your mind that you wish to get? Just play around with the settings till you achieve just that.

With a laser light source that will last for 20000 hours and a price tag of just $2,999 ($3,999 for the AU810PB), it is clear that LG has a winner on their hands. The only major difference between the HU810PW and AU810PBB is the inclusion of Calman autocalibration (which considering the lack of factory calibration on this unit - is very much worth it). Because of this, we are happy to give them our Best of CES 2021 as well as our Editor's Choice Award.

A stunning, incredibly versatile entry from LG that will shake up projector pricing in this price range. One of the first bright projectors we have seen that actually work as a home theater driver as well.