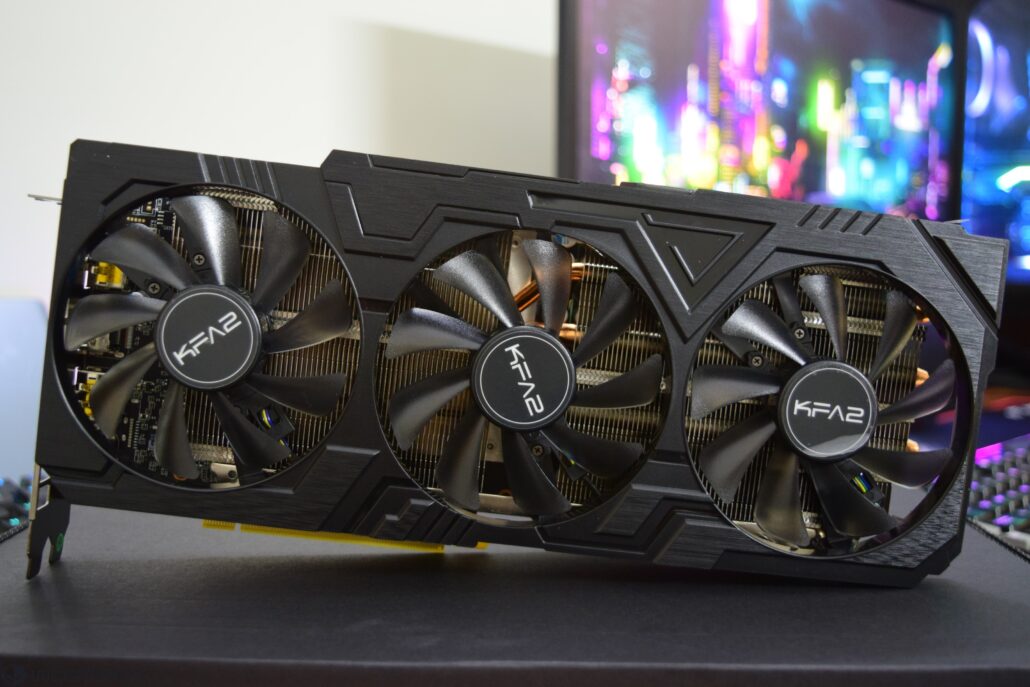 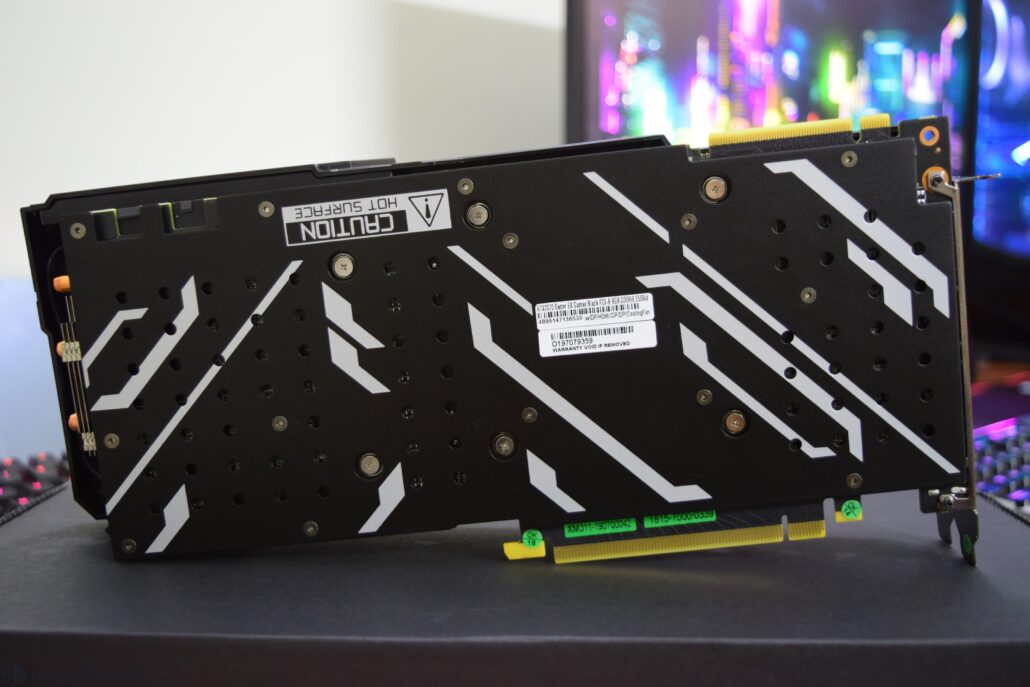 In terms of design, KFA2 has featured three of their 90mm fans on the graphics card. The fans are based off an acrylic design which means they will be able to reflect and adapt all the RGB lights that are running within your PC. 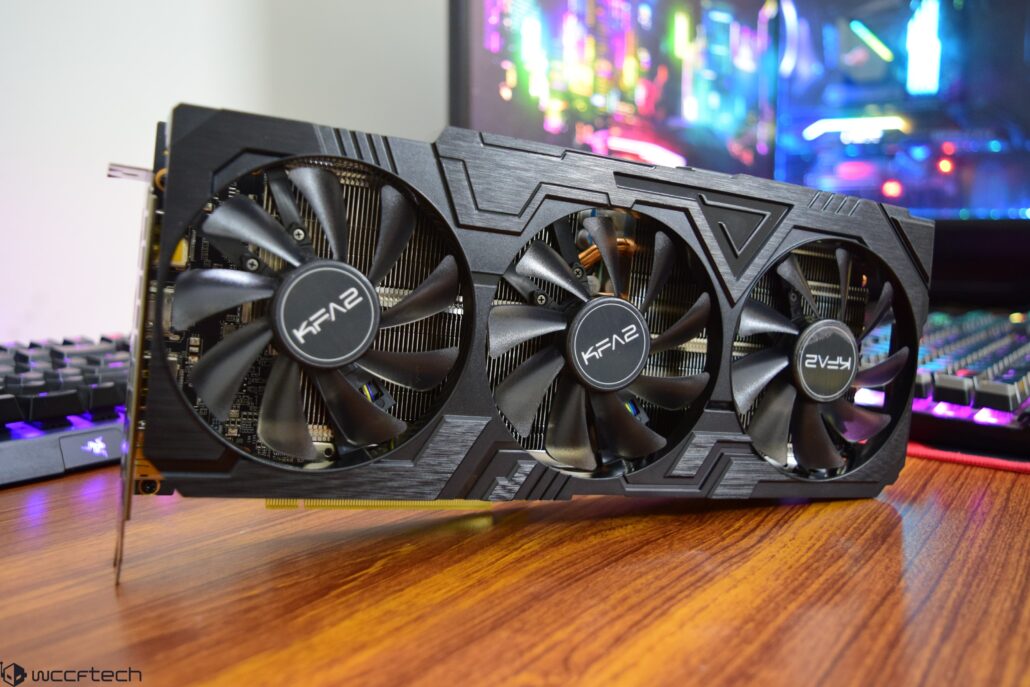 The shroud is a slightly modified version of the one featured on the RTX 2070 EX GAMER, updated with a nice brushed-aluminum finish on the front and coupled with a futuristic design theme. The shroud is made out of metal and does add some durability to the card's main structure. 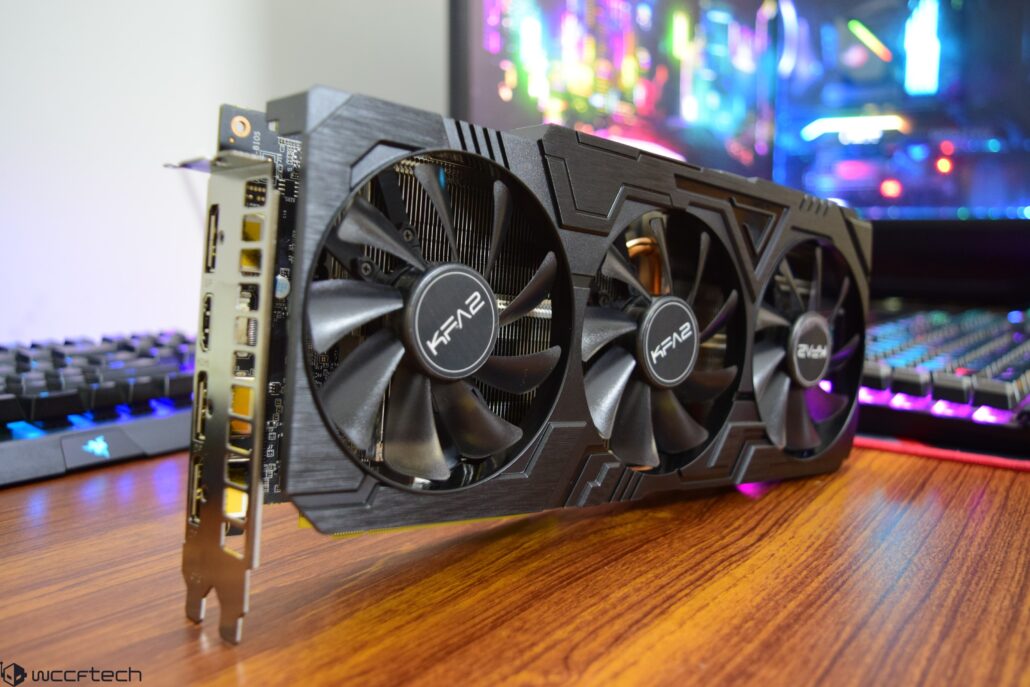 Coming back to the fans, the 90mm design has 9 fan wings that push air towards the large heat sink underneath the shroud. 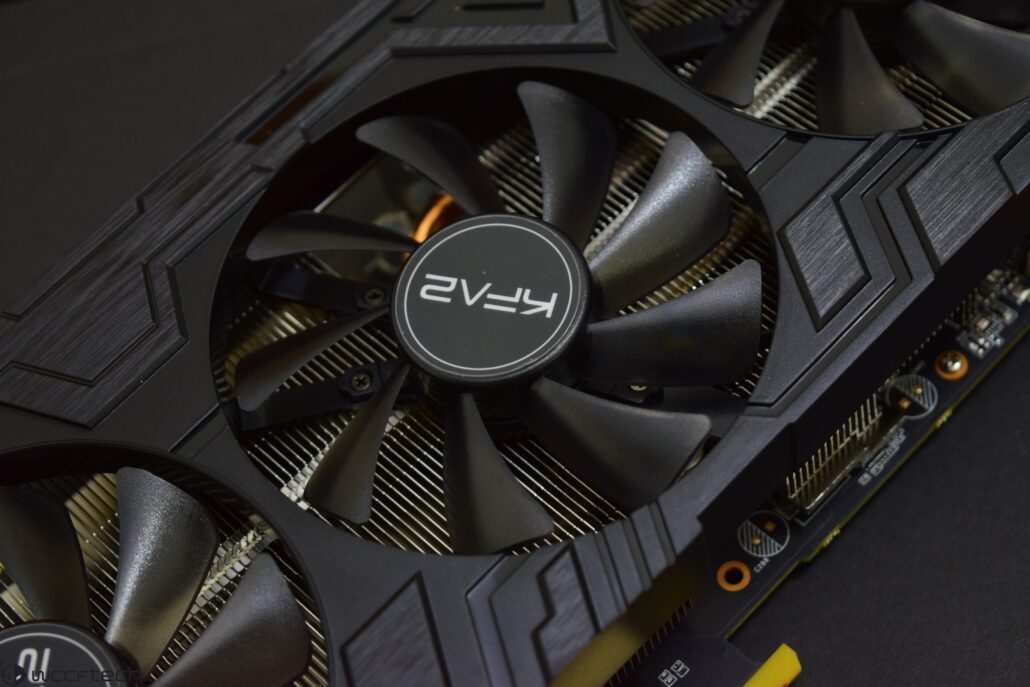 These fans are known as the EX Tri-series fans which offer 90% more airflow and more air pressure than their previous generation Twin fans. This allows for a higher TDP of 260W on the RTX 2070 EX SUPER, allowing for higher clocks and overclocking. 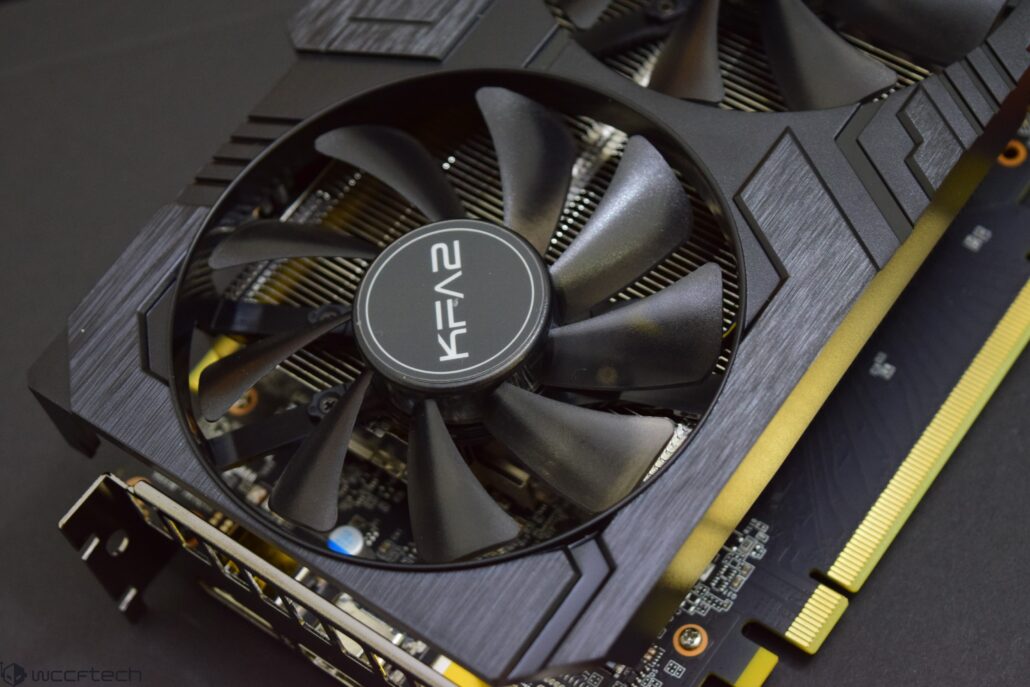 KFA2 is using their Silent Extreme Technology which offers silent fan operation on the card. The technology is hybrid in nature which allows for different types of fan operation. Under silent load, all three fans will stop operating while in normal load, the front two fans will spin with the one on the end switched off until the card hits its temperature threshold of 60C. 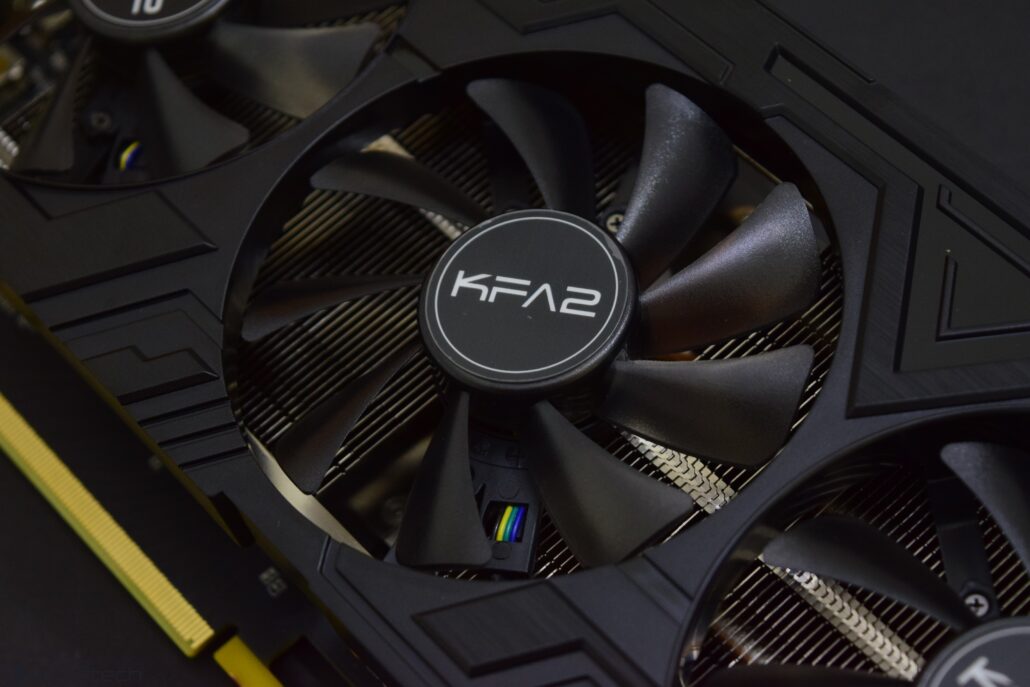 I am back at talking about the full-coverage, full metal-based backplate which the card uses. The whole plate is made of solid metal with rounded edges that add to the durability of this card. The matte black finish looks great along with the white textures. 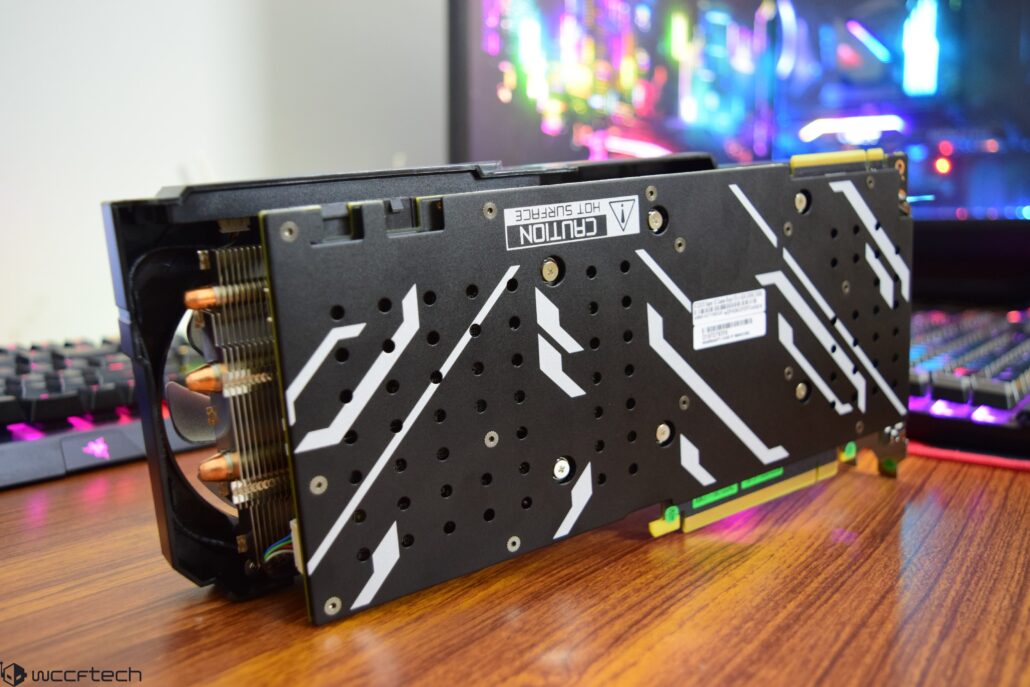 There are cutouts in screw placements to easily reach the points on the graphics card. There are open vents for the hot air to move out from the back too. KFA2 is also using heat pads beneath the backplate which offer more cooling to the electrical circuitry on the PCB.

Gone is SLI and now we have the latest NVLINK gold finger connectors. The RTX 2080 Ti, RTX 2080 SUPER, RTX 2080 and RTX 2070 SUPER come with a single NVLINK connector which allows for 2-Way multi-GPU functionality. The top-end graphics cards ($500 US+) are the only ones to support NVLINK connectivity so multi-GPU is only for the high-end spectrum of cards and for good reason. Only these cards have enough bandwidth that can drive another GPU of their tier as anything below wouldn't have the power to interlink to the other card.

Multi-GPU still isn’t optimized so you won’t see much benefits unless you are running the highest-end graphics cards. That’s another reason why the RTX 2070 and below are deprived of NVLINK connectors. The NVLINK connectors cost $79 US each and are sold separately. Currently, only NVIDIA is selling them as the AIB cards don’t include any such connectors but that may change once the standard is adopted widely. 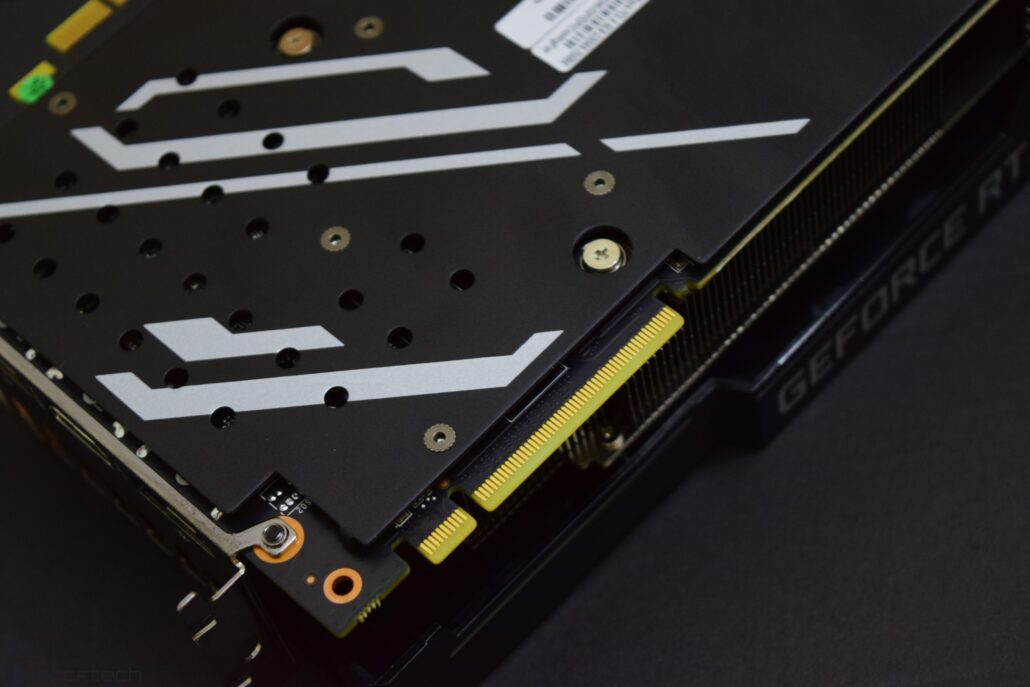 With the outsides of the card done, I will now start taking a glance at what's beneath the hood of the graphics cards. The first thing to catch my eye is the humungous fin stack that's part of the beefy heatsink which the cards utilize. 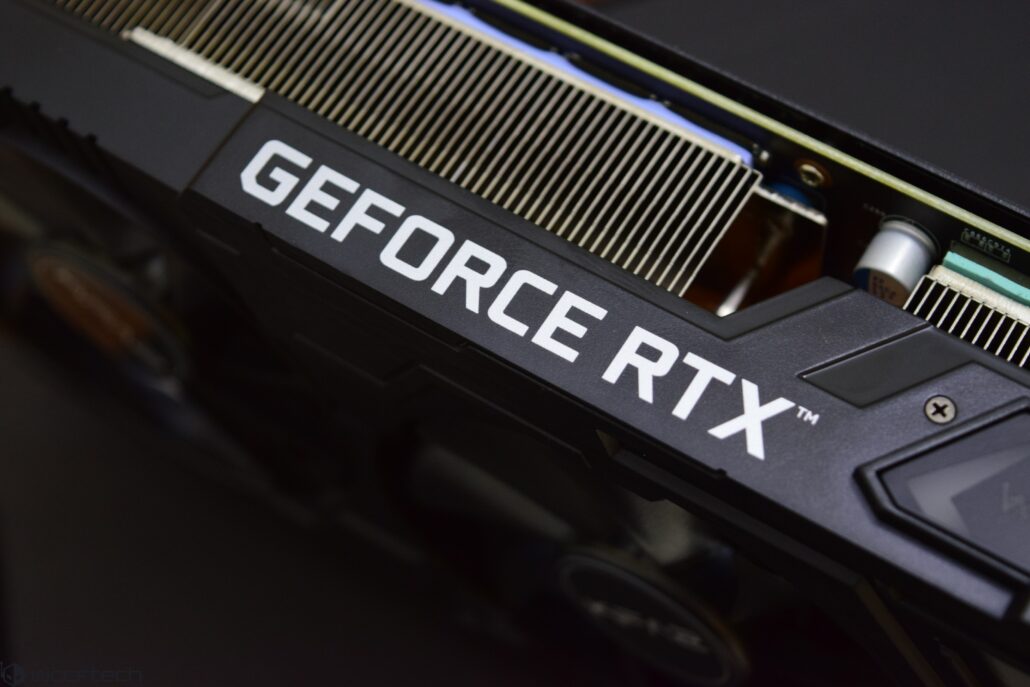 The large fin stack runs all the way from the front and to the back of the PCB and is so thick that you can barely see through it. It also comes with the fin stack design which I want to shed some light on as it is a turn away from traditional fin design and one that may actually offer better cooling on such power-hungry graphics cards which utilize the TU102 and TU104 GPUs.

Talking about the heatsink, the massive block is comprised of 25cm high performance composite heat pipes which run through both aluminum fin stacks and lead to the central GPU copper-based baseplate. The heatsink has adequate thermal pads, making contact with the VRMS, MOSFETs and the memory dies. 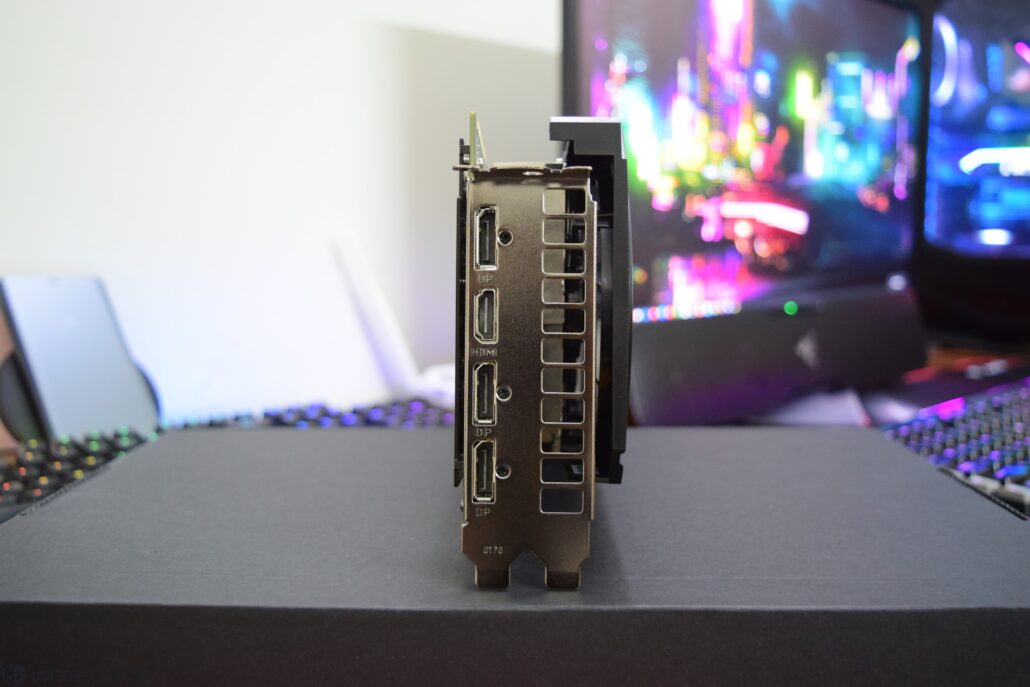 KFA2 makes use of a 7+2 phase PWM design and MOSFETs with shielded inductors which are part of their premium PCB design. The memory chips are from Micron and have the '9JA77 D9WCW' model number which is for the 14 Gbps dies. The card has thermal pads placed on top of all 8 modules which cover the entire die and not just a partial area. There's a long thermal pad on the MOSFETs too which offers thermal transfer to the main heatsink, keeping them running stable.

The KFA2 GeForce RTX 2070 SUPER EX GAMER BLACK is a powered by an 8+6 pin connector configuration. The card can sip in up to 300 Watts of power from its power delivery but has an official rated TDP of 225W by KFA2. 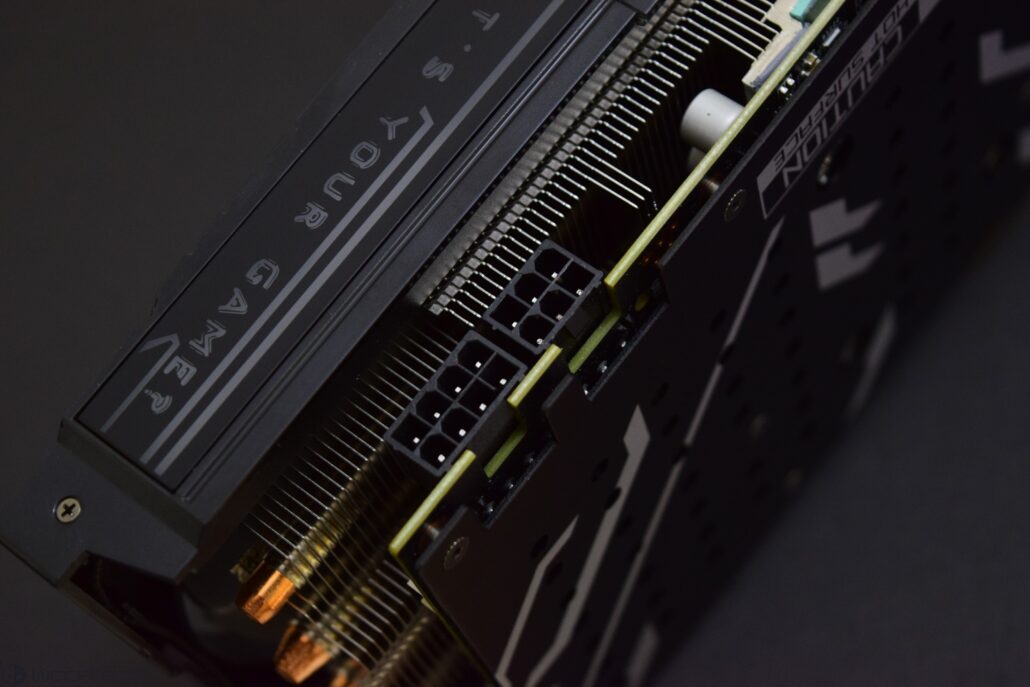 KFA2 has also added RGB to their latest RTX and RTX SUPER series graphics cards. Their top of the line GALAX HOF lineup has the whole spiral ring design going on but the EX GAMER series features a lighter touch with the side 'What's Your Game' quote lit up using their RGB effect technology.