Progression is the most satisfying part of any game. Mastering combos you only fathomed before in Street Fighter. Taking on early boss monsters that are now fodder late-game in an RPG. Even polishing off players online after getting beaten repeatedly. Progression feels good, and games are best when they master the art of progressing through a stage, making the player feel like each leap forward is truly earned.

Katamari Damacy REROLL understands the satisfaction that progression gives you all too well. The very mechanic that rolls the game forward is progression - a snowball effect that makes the player feel incredibly accomplished in a relatively short amount of time. All you do is simply push a sticky ball forward, rolling up objects smaller than it, until it grows larger and larger.

The mechanic itself is simple, but the way it controls it does not. Just a heads up - do not play this with a keyboard. This game is designed for two analogue sticks, and woe betide anyone who tries to tap away at this game. Yikes. To roll forward you must push both sticks forward, one stick for each hand of the minute Katamari Prince who pushes it. Pushing one stick forward and pulling another back will rotate the ball, and steadily letting go of one stick as you roll the ball forward allows you to turn. It's honestly pretty awkward at first, but that's by design. The game would be too simple with an immediately intuitive control scheme.

So the tiny prince starts off by collecting chocolates, takoyaki, batteries, chalk - tiny objects, like cans, rats and cats will still be too large for you to pick up. Not for long though. As you grow the camera pans out to give you more of the world, and you slowly pick up more and more objects. The larger the object, the more it will grow you, but of course getting up to that size in the first place is a challenge.

But soon, so many of the objects that were obstacles to you before start collecting into your ball. Cats that dashed at you to break your ball apart now run in fear, you collect the dog and his dog house, traffic cones, cash registers - and then suddenly people. People run afraid of the Katamari Prince and his destructive orb.

You become the scourge of the very planet, threatening to swallow up humanity. Stages progress, and soon you'll be picking up cars, buildings, trucks, hot air balloons, and eventually even the islands these cities reside on. This is progression distilled.

Klonoa, Splatter House, and Mr. Driller Remasters May be on the Way from Bandai Namco

The whole world has this marvellous, angular, low-poly design aesthetic which manages to look great both on a tiny scale and a massive one. The bright colours and charming designs of the characters are just wonderful - and it all looks great on a modern system. On PC, Katamari Damacy REROLL has 4K and high framerate support, and on Nintendo Switch - well, it's handheld. That's awesome.

Even the music is catchy and fantastic, if quirky in its own way. I guess if complaints were to be made, it's that Katamari Damacy REROLL is too short, and the stages are often the same stage with different item placements. Yes, this changes your paths and strategies, but it is still a very similar experience each time. You get several main stages, and then several more constellation stages, where you collect particular items. Though, as some of the stages are more than 20 minutes long, you'll definitely be sat here for hours enjoying the game.

Katamari Damacy REROLL is the best version of the original game, undoubtedly - I just wish there was more to enjoy. It's one of those games where I feel disappointed once I've reached the end of the road. Sure, there's royal presents hidden in stages to collect, and high scores to chase, but it's not the same - even though I'm guaranteed to return to it, anyway.

Reviewed on PC (code provided by the publisher). A digital code for PC is available for purchase via Green Man Gaming, with a 10% discount. 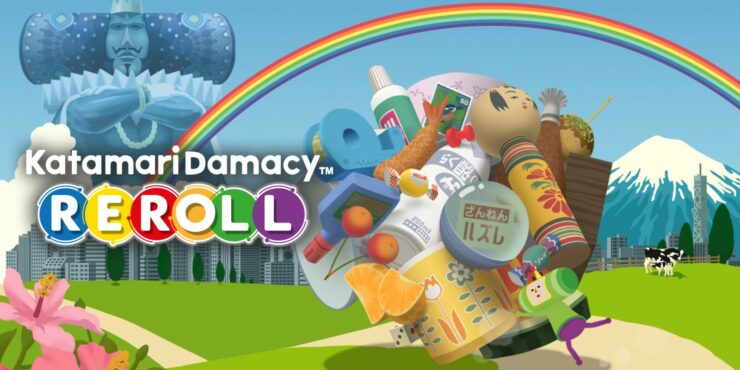 Katamari Damacy Reroll is short, simple, but so very sweet. And at a price point as low as this, it's honestly hard not to recommend, even with all the great games that came out this Fall.