Conclusion - Let This Be The Last of 14nm HEDT CPUs

Today is a great day to be a high-end desktop enthusiast as both Intel and AMD unveil their next-gen processors and platforms aimed at the high-end consumer market. Intel is lifting the embargo first and officially launching the 10th Gen X-series processors along with the refreshed X299 lineup from their AIB partners.

Intel's 10th Gen X-series brings a lot of what we were already familiar with with the past iterations of X-series and some new changes. For starters, Intel's X-series processors now offer the new 10th Gen Cascade Lake-X design which is based on a super-refined 14nm process node. Cascade Lake is also supposed to add software-side mitigations against CPU vulnerabilities but there are new CPU vulnerabilities popping up every month or so and even Cascade Lake couldn't survive their nasty onslaught.

With that said, some new features for the 10th Gen X-series family, especially the Core i9-10980XE, include up to 4.8 GHz boost clocks, support for 256 GB memory with speeds of up to 2933 MHz, an updated Intel Turbo Boost 3.0 and Deep Learning boost algorithm, 72 PCIe (Gen 3) platform lanes, 2.5G Intel Ethernet controller (i225) and Intel Wi-Fi 6 AX200 support. Most of the changes here are on the platform side which is made possible by AIBs who are always trying to deliver the best HEDT boards for the respective high-end CPUs. 256 GB capacities are possible through the use of dual capacity memory which is now available by several memory manufacturers and the new wireless & ethernet capabilities are also added on the board side. Intel's opening up 44 PCIe lanes across the entire 10th Gen lineup which is great while the remaining 28 PCIe lanes are offered by the X299 PCH. 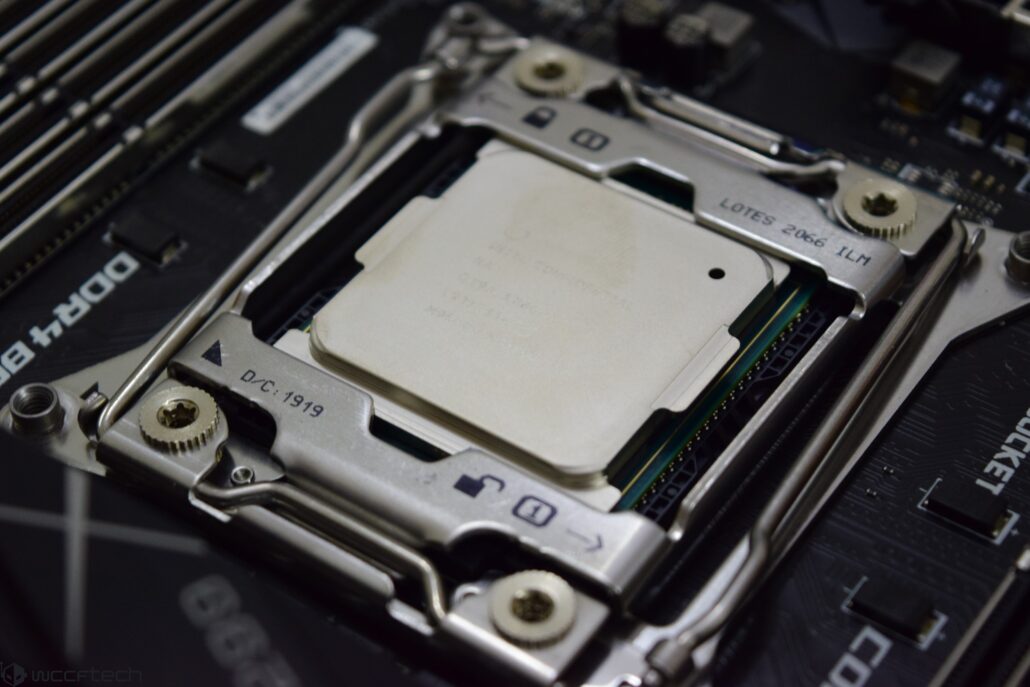 The Intel Core i9-10980XE specifically is a decent processor for under $1000 US. That's the main change that we are getting this year. The pricing has seen a major cut and now we are getting a faster processor than the i9-9980XE at half the price. It was a necessary change considering the Ryzen 9 3950X from AMD launched before it and offers surprisingly good performance for $749 US with its 16 cores and 32 threads. That's the main competition of this chip as the AMD Threadripper lineup has moved one step ahead and would remain the undisputed king of the hill as you will see in our Ryzen Threadripper 3970X review in a few hours. The AMD Ryzen 9 3950X really gives the i9-10980XE in multi-threaded workloads and the heightened IPC has given AMD enough room to take up Intel's HEDT in gaming benchmarks too. At 1440p, I couldn't find a major difference between the i9-10980XE and Ryzen 9 3950X. Plus the fact that AMD's 3950X has the advantage of a lower platform price while supporting PCIe Gen 4.

It all boils down to what you're looking for. If you want a HEDT platform with quad-channel DDR4 memory and up to 72 PCIe lanes, then Intel's Core i9-10980XE under $1000 US is the cheaper way to go as AMD's Threadripper platform now starts at over $2000 US (Ryzen Threadripper 3960X + TRX40 Motherboard) while Intel's HEDT platform with the top-end 10980XE can be built for around $1500 US (Intel Core i9-10980XE + X299 Motherboard). If you want more cores for cheaper, then sure, Ryzen 9 3950X is an absolute champ for the price. Intel still has the upper hand when it comes to clock speeds and overclocking the processor was pretty easy to get to 4.7 GHz across all cores. The temperatures on the 10980XE are also decent enough when cooled by a 280/360mm AIO liquid cooler but the power numbers can get pretty concerning when overclocked.

Overall, it was good on Intel's part that they made the price cut and not get demolished by the Threadripper lineup. There have been no architectural improvements and no feature-side additions except for some catchy marketing phrases such as Intel Deep Learning boost being added to the mix which no enthusiast cares for anyways. The +200 MHz clock speed is abysmal while the platform+CPU lane count, while a small bump over the 9th Gen X-series, is still based on PCIe Gen 3 protocol. There's a reason why Intel's review embargo got pushed ahead by 6 hours because this is all the limelight the 10th Gen X-series had before becoming entirely irrelevant in the HEDT space.

The 10980XE still manages to find a competitive spot against the 3950X and is one of the better HEDT CPUs which gets a recommendation from me for being the highest core count and the fastest clocked HEDT processor under $1000 US but there's nothing else good to say about it.

The second product I focused on in this review is the MSI X299 Creator motherboard. Using a ton X299 motherboard over the years, I found this one to be the most exciting of them all. There are some reasons why this motherboard is so special, it's design and quality just radiates out on you as soon as you take it out of the box. 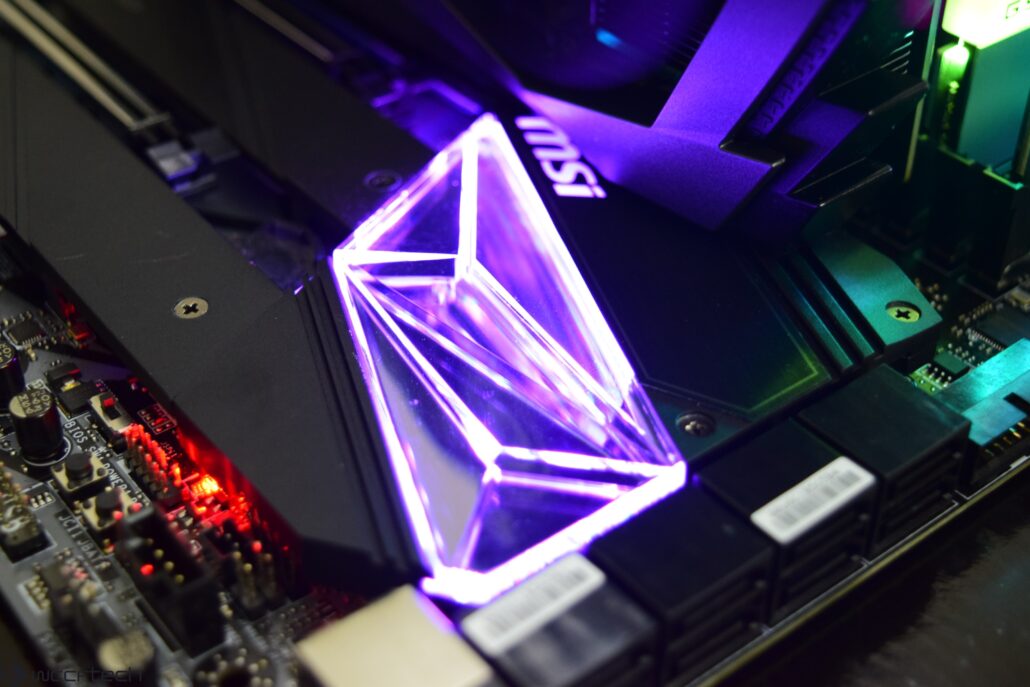 The design of the motherboard is super impressive, it packs all the bells and whistles of a high-end desktop motherboard. It supports fast memory, fast storage and houses a solid 13 phase VRM that let me overclock the 10980XE to 4.7 GHz across all cores. The VRM temps were under 60C at full load and even with overclocking, seeing them under 70C was impressive considering the previous X299 motherboards shot past 80C when the CPU was overclocked. The motherboard features a lot of expansion options, there are four PCIe 3.0 full-length slots, triple M.2 slots on the board & four more M.2 slots on the Xpander Aero AIC which is a fantastic addition alongside the Thunderbolt 3 card.

The RGB implementation is very subtle, giving a nice display inside your PC. You can also disable the RGB LEDs from the BIOS or the bundled software which is super-easy to use. The BIOS on the X299 Creator is as good as it gets, giving users a lot of tuning options to select from. You can see them below:

A dial on the motherboard let's you select from 11 stages (GOES ALL THE WAY UP TO 11 IS A THING ON THIS BOARD). These stages have pre-defined overclocking profiles which the motherboard can configure for your processor. Do note that software-enabled profiles usually lead to higher supply of voltages than manual overclocking leading to higher temperatures and power consumption. A Debug LED is coupled with diagnostic LEDs while power/reset switches are located at the bottom of the board, right next to the dual BIOS switch.

There's ample amount of storage in the form of 8 SATA III ports and even a single Turbo U.2 port. Tons of USB Gen 3.2 connectors, both on the case and on the rear I/O panel are featured, making this board a dream for connectivity enthusiasts. Talking about connectivity, the motherboard has a 10G and a 1G Ethernet LAN option which is great for networking heavy workloads. There's also the added benefit of WiFi 6 which you can connect to the dual-antenna bands that ship with the board.

For $539 US, the MSI X299 Creator may just be the best workstation, creator and gaming-focused motherboard that I have seen yet, offering the best connectivity and I/O features in a design that looks beyond stunning. If you're hunting for an Intel 10th Gen HEDT CPU like the Core i9-10980XE, do consider the MSI X299 Creator as it would go really well along with the rest of your build!