Our audience is full of self-building enthusiasts when it comes to PC builds, so why are we taking our time to look at a prebuilt from iBUYPOWER? Simple, not everyone wants to take the time this holiday season to build computers for themselves, family members, or friends who are trying to get into PC gaming on a budget.

That's where the iBUYPOWER Trace 4 9310 comes into play. This is a ready-to-ship model from iBUYPOWER that delivers solid value on Amazon for the asking price of $699.99. This model isn't sold through their custom ordering system on their own site but rather they've paired up with Amazon in order to distribute these units quickly through the holiday season. Don't want to way 7+ days for a custom build and need it pretty quickly? Why not go this route and get take advantage of that Prime delivery service.

But the real question is the $699.99 Ryzen and Radeon powered system really worth the asking price? Or is this another cheap shot at trying to cash in on the holiday rush? After all with consoles sold out and a record number of people working from home and virtual learning, gaming computers have become quite the hot topic this year for Christmas.

The iBUYPOWER Trace 4 9310 doesn't' exactly come very well concealed so be weary of porch pirates if you order this one, find out if you can request a signature for delivery or have something in place to protect your order. But the box does a good job of giving you an idea of what the case looks like, ignore the components shown or else you might be disappointed when you open the box. There is a nice label that shows the specifications of the build right on the box.

Inside you'll be first greeted by an easy-to-read and color-coded setup guide in case you're new around here and aren't sure where to start. Or that's a good thing for those folks who have asked you to build them a computer to check before they call you to ask what a USB Port is. The computer is well protected with soft cell foam padding that protects the computer while in transit from hard bumps. No extra padding inside the PC was needed due to the lightweight of the components used.

You'll find an iBUYPOWER Ares M2 mouse and keyboard in the box. While they're not the high-end gaming peripherals esports gamers are out to get they are quite solid and full of RGB flair for those who care about those things. You won't be throwing these in the trash immediately and will likely get a good bit of use out of them, consider them a value add rather than a selling point.

The Trace 4 case is lightweight but solid, it made the trip free of damage and still has a fairly good feel to it. The front I/O consists of two USB 3.0 ports, a power switch, and mic/headphone jacks. The front panel is solid with two large RGB light strips and while it's not going to allow for ANY airflow the incoming air is handled by the triple 120mm RGB intake fans on the side that are filtered with cutouts in the side panel. The rear of the case has a nice label letting you know exactly what ports to use for video, however, it's made of paper and left a nasty residue after tearing as we removed it. Come on guys, find a better sticker to use as the idea is great the execution is not.

HYTE Revolt 3 Case by iBUYPOWER Review – Is it worth the HYPE?

Inside the case is surprisingly well managed. Most prebuilt, especially high volume ones, are literally slapped together with the cables stuffed away haphazardly. And while I'm sure you or I could do better this execution is better than most budget systems you'll find.  The backside of the motherboard tray makes for easy access to the intake fan filter and to see where the SSD is mounted.

Most of the component selection here is quite solid. Let's run the parts and see just what you're getting, there will be a table of components in the next section but this is part of the rundown. The CPU is rock solid, the Ryzen 5 3600 is one of the best all-around gaming CPUs to come to market in the past few years. This means you'll not be dealing with a simple quad-core but rocking a 6 core 12 thread 7nm Zen 2 based CPU and that should hold you down for years to come. But clearly, it's a tray binned CPU since it has a simple clip-on Deep Cool cooler rather than the wonderful Wraith Stealth that ships standard with the retail version of the CPU.

The motherboard however I can't say the same for. It's adequate in the sense that you won't lose any performance of the CPU or any components installed but it is an ASROCK A320M/ac meaning you get zero overclocking support nor will you get PCIe Gen 4 support that the CPU and GPU both have. Speaking of the GPU, we're greeted with a modern offering here as well. The Gigabyte Radeon RX 5500 XT 4GB is a great 1080p and delivers that performance with lower power draw and temperatures than the previous generation RX 500 Series.

Memory and storage are really the Achilles heel of this build but both are easily and cheaply upgraded if you so wish. The memory that is included is an 8GB DIMM from ADATA and rated for 2666, which would fine for an Intel build (and don't get me wrong it's fine here too) but the Ryzen 3000 Series CPUs have native support for DDR4 3200, something the motherboard should support but it is what it is. You'll notice it's a single-channel configuration which is less than ideal but we'll discuss that more later. As far as storage goes we've got a single ADATA SU630 240GB SATA SSD, a solid offering but still somewhat small. Thankfully there's room on the back to add another 2.5" drive AND an open NVMe slot if you wanted to go that route too.

The included power supply is from the company High Power and rated for 500W giving you some headroom on GPU upgrade if you so desired down the road. Typically I would rail on the included PSU but the High Power PSU is 80+ Bronze rated and carries a single rail 12v system so it's much better than expected 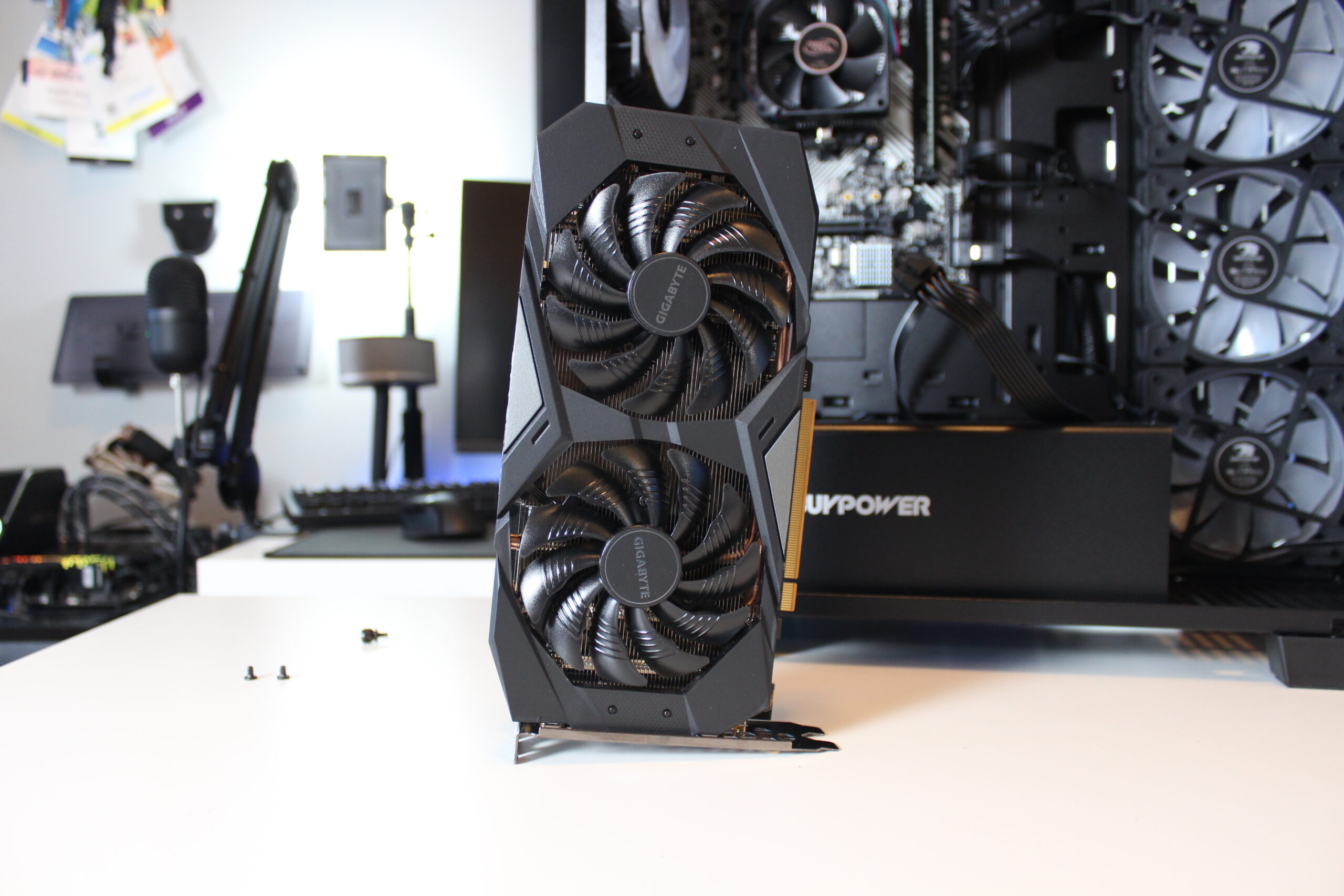 Well, we couldn't possibly go through all the specifications and looking at the system if we don't at least talk about the performance right? Well for starters we take a quick peek at general system performance with PCMark 10 and the more popular 3DMark test passes. The Trace 4 9310 passes with good marks, even with its single-channel frame configuration.

Now, 1080p gaming is where the rubber meets the road with the iBUYPOWER Trace 9310 and boy does it deliver. I could have spent days on end testing the most demanding high-intensity AAA games on the market but I opted for a handful of the most played games as of now. The games listed below run smooth as silk and you'll want to pair this system with AT LEAST a 75Hz FreeSync panel to really start to feel it deliver.

Interestingly enough this configuration is very close to what we use to test modern AAA game releases 1080p gaming and you'll find it driving the latest titles at 10080p Medium with ease.

*I have to add in that with the current SSD installed you'll likely not fit Warzone in the installation unless that's literally the ONLY game you think you'll ever play.

Bottom Line on the iBUYPOWER Trace 4 9310

At the end of it all, I'm walking away feeling like iBUYPOWER delivered on the promise of accessible 1080p gaming with the Trace 4 9310. When I first sat down with it I thought I could easily beat the cost of it with new components as I had a buddy wanting me to build one for his kid for Christmas, it did take long for me to just say dude, this one will do and order up an extra stick of 8GB of ram.

Below I've taken a quick romp through PCPartpicker and while the components aren't perfectly 1 to 1 and I haven't even added in the Windows license or mouse/keyboard it didn't take long to soar past the asking price of the Trace 4 9310. 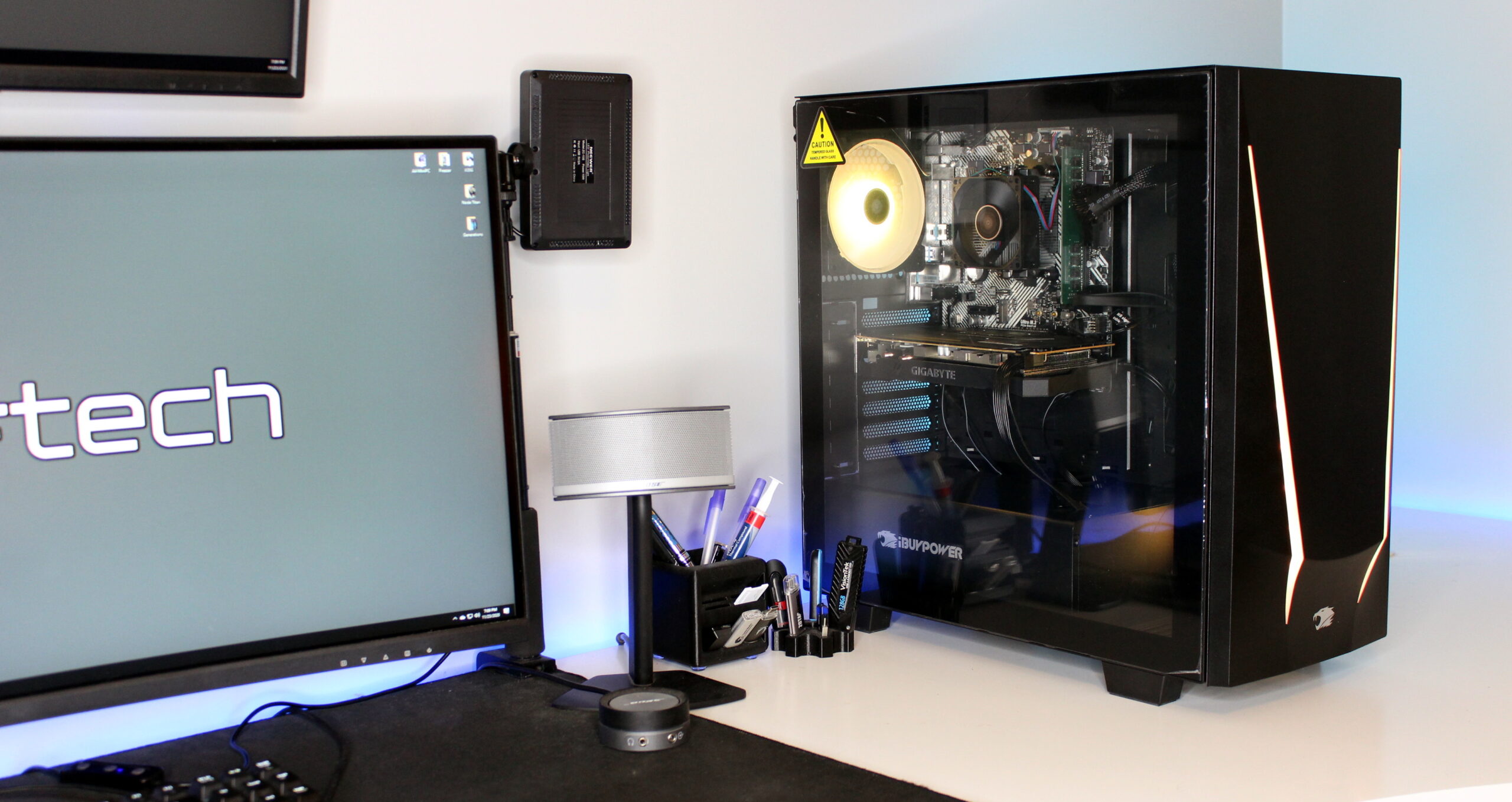 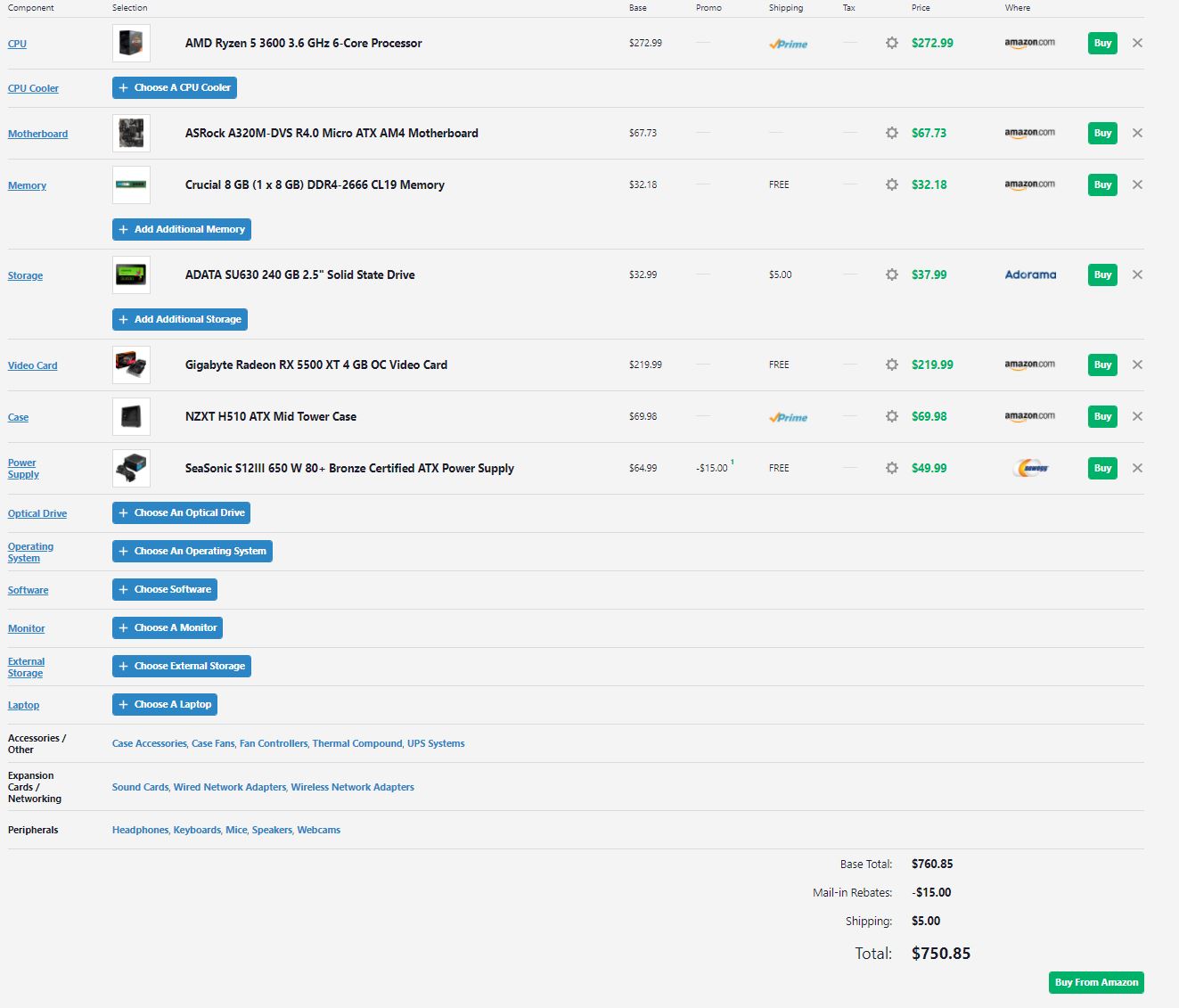 But that's not to say the iBUYPOWER Trace 4 9310 is perfect. We're talking about a Ryzen 5 3600 on an A320 board and paired up with only 8GB single-channel DDR4 2666. I felt that was too little so I ordered a matching stick of memory and reran all the tests, the results were genuinely surprising. I found it didn't make much difference in results and only Warzone and R6: Siege improved (by 10% mind you) but the overall useability of the system was much snappier on the dual-channel 16GB configuration and it only cost me just shy of $30 to do so. So basically, add in the cost of another stick of RAM, don't consider not doing it. You'll thank me if whoever is using it decides to use Discord while playing a game.

Storage is the other issue, 240GB goes really fast but thankfully storage is somewhat cheap right now and the biggest titles people are playing still aren't massive in size. I still can't let the SSD size go without complaining as a 500GB or so drive would have expanded the livelihood of the stock configuration and kept the end-user from wanting more so quickly. I even had to plug in an extra drive to fit all the games tested, or else I would have had to leave Warzone out.

But, all that aside the iBUYPOWER Trace 9310 offers good performance with mostly solid component selection. It's got good bones as the saying goes. Those in the market for a prebuilt are probably not going to be bothered so much by not being able to overclock the CPU or memory of this system but they likely will feel the impact of the small memory and storage provided out of the box. The mouse and keyboard addition is decent for first-timers but experienced PC gamers might find them feeling tacked on and not very useful. The good thing about this system is these are all off the shelf components so nothing is proprietary or janky, it all goes together nicely and is a good solid offering for the price. You might find competition when things go on sale but the $699.99 asking price and quick delivery make this one an easy pick.