HTC One V is part of the 'One' lineup from HTC which includes HTC One S and One X, which is their top end offering. We reviewed the One X a few days ago and were quite impressed by its striking design and performance. One V lies on the other extreme of the spectrum offering only the bare essentials. It's not the lowest end Android smartphone in HTC's line up but it's still one of their cheapest offerings. With One V HTC is going head to head with a lot of other phones from competing manufacturers. Does this phone have what it takes to be crowned as the best value for money smartphone? Let's find out.

HTC One V borrows heavily from Legend, an HTC Android smartphone from way back in 2010. It brings back the chin design that was HTC's specialty a few years ago but went out of style. In fact from pretty much every angle this looks like a reincarnation of Legend, and that's a good thing because Legend was quite attractive back in its day. However HTC didn't just copy pasted the entire design and there are noticeable differences to be seen.

Just like every other modern  smart phone, the touch screen dominates the front with capacitive buttons beneath it. Since One V comes pre-installed with Android 4.0 the capacitive buttons have been modified accordingly much like we saw on One X. You get a back, home and multi tasking button. The signature HTC chin protrudes out at the bottom. It's pertinent to mention that the glass covering the LCD is raised from the body. It's not flushed and thus has sharp edges which are felt every now and then. It's not a nice feeling and I'm not sure why HTC went with this design choice.

The back is brushed aluminum with an HTC logo etched on the center. Towards the bottom is a plastic cover that holds your SIM card (regular sized). It also holds the Wi-Fi and cellular antennas so removing this cover will disconnect you from both, an unfortunate side effect of such a design. The 5MP camera along with a singular LED flash resides on the top. 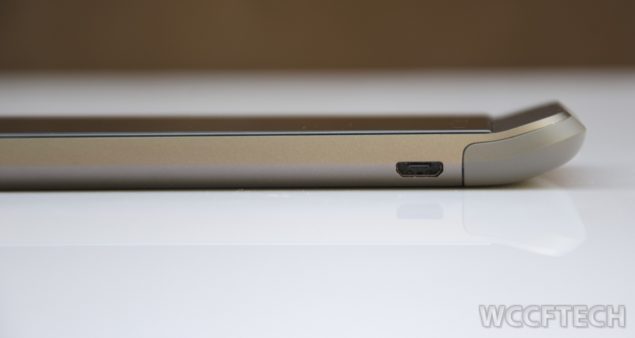 Being a unibody design the aluminum shell runs along the sides too. The microUSB port is located on the bottom left, which is just about the worst position HTC could have chosen for this. You cannot hold the phone with the cable attached as it gets in the way. 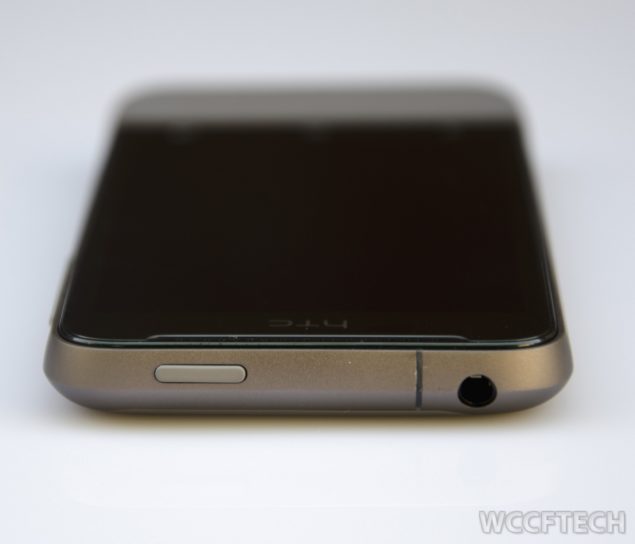 The power button and 3.5mm jack are located on the top. A thin cutaway besides the 3.5mm jack holds the LED notification light. It's a very minor change from the usual notification lights we're used to seeing but it looks really good and enhances the overall visual appeal of the phone.

Built quality is something we take for granted on HTC phones because usually all phones from the manufacturer are top-notch in this regard. HTC One V is no different. It's not too heavy such at it bogs you down and not too light to give a 'cheap' feeling. The phone feels like it can take a few falls before something goes bust. The only issue I have is with the absurd micro USB port location and the sharp edges of the glass covering the LCD. Other than that it's a high quality phone all around despite being a low-end offering. 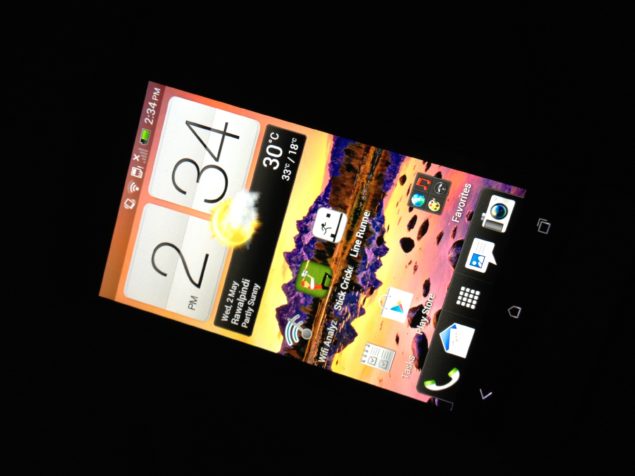 HTC has chosen a rather small 3.7" LCD screen for One V. At 480x800 resolution you're looking at 250PPI. Although that's no where near as the kind of pixel density on the One X, it's still quite respectable. Individual pixels are almost impossible to notice. Unlike the One X HTC opted out of using an SLCD-2 screen here and instead we're treated to a run of the mill display. Though it falls significantly short of the kind of quality we were treated to on the One X, it is still a decent display. Color reproduction is acceptable and viewing angles are decent. Sunlight legibility is surprisingly good. For a smartphone at this price point this screen is pretty excellent and you'll be hard pressed to find a better screen in a cheaper package.

Unfortunately our HTC One V kept giving an SD Card error whenever we tried taking software pics so we had to resort to taking pictures manually.

HTC One V comes pre-installed with Android 4.0.3 and Sense 4.0 UI. We've already covered Sense 4.0 in detail in our One X review and we were quite satisfied. Although One V runs the same UI HTC has made slight changes to accommodate the slow hardware. Let's look at what has changed in One V compared to One X.

The Sense lock screen, one of Sense UI's most touted features, has lost most of its glory. You still get the ring unlocking mechanism with customizable shortcuts at the bottom, however the fancy animations are no more. That means you no longer get the weather effects, social network updates, clock or the stock. You do however get music controls when a song is playing.

The home screen too has gone through some dieting. Although initially it looks like a regular Sense 4.0 home screen setup, there are quite a few options here that are also stripped off. You no longer get the leap view, which is an overview of all the home screens when you press the home button. I'm not exactly sure why HTC did this as it really doesn't look like a hardware intensive feature.

The multi-tasking menu has also been a victim of HTC's diet plan for Sense UI. On One V you get the regular Ice Cream Sandwich task switching UI and not the card layout we saw in One X. While the card layout does look more appealing, I have no issues with the standard system. In fact it works better than the card layout in my opinion as it involves much less scrolling.

No weather animations. Yep the trend setting weather animations we saw in the Hero way back in 2010 and which got a revamp in Sense 3.0 are no more. You still get the nice Sense clock widget with weather information but it's not animated anymore. For anyone who got a kick out of these animations will be disappointed. Again I cannot blame the hardware here. If Hero or Desire can show these animations then the up to date hardware on One V can surely run it too.

The rest of the UI remains the same; from the app drawer to the stock HTC apps to the settings menu. However unlike in One X, Sense 4.0 in One V leaves a sour taste. It's just all very dull and boring. HTC has cut nearly everything that made Sense 4.0 great and as a result we have this hollow shell of a UI. Almost none of the stripped down features make any sense (no pun intended). None of them have any bearing on the over all performance of the phone. Speaking of over all performance, the phone barely chugs along with Sense 4.0. There are noticeable slow downs even with very few apps installed. Sense 4.0 just isn't designed for such weak hardware and 512MB of RAM is criminally inadequate.

Being a budget phone, One V doesn't exactly offer state of the art hardware. You get a single core Qualcomm Snapdragon CPU clocked at 1GHz and 512MB of RAM. Graphical tasks are handled by Adreno 205.

The scores speak for themselves. This isn't device you'll be buying to show off its benchmark prowess. It gets the job done for the most part. It will play your casual game like Angry Birds or Cut the Rope just fine but anything over that will be struggle. It's the GPU that really bogs the phone down in gaming performance. Adreno 205 is quite anemic and even the 2-year-old Galaxy S has a far superior GPU.

On the battery front the phone fares rather well. Because there isn't any power hungry hardware underneath, you can get a full day's worth of use which in smartphone terms is excellent.

HTC fitted One V with a 5MP camera capable of recording videos in 720p resolution. The picture quality from this lens is pretty decent provided you have ample lighting. While the shutter lag here is a bit more than what we saw in One X, it is still very fast. One V has 4GB internal memory and can be further expanded through a memory card.

HTC One V is HTC's attempt to replace the now aging Desire S. While Desire S back in its day was a great budget phone offering decent performance, I cannot say the same for One V. Purely on design and aesthetics it's a great little smart phone. It's got the signature HTC built quality, albeit with a few shortcomings, but compared with the usual plastic builds we're used to seeing this aluminum clad body is a very refreshing change. Budget smart phone does not need to feel cheap and One V is a testament to that. However where HTC lets us down with One V is its software performance. Despite going on a crash diet Sense 4.0 can really bog down the overall performance of the phone.

Competition at this price point is fierce. Sony's entire lineup falls around this price range and Samsung has quite a few phones that sell for the same or much less. While not a lot of them offer quite the same level of built quality as HTC, they do have a stronger cohesion between hardware and software which is one area where One V lacks. If HTC has provide timely updates to rectify this issue then One V can be the best budget smart phone out there. However in its current state its a tough sell. There are simply too many phones that offer more for the same price.