Rarely do you get the chance to kill the world's most famous water-based creature. No, not Flipper. While playing through Gods Will Fall, I've finally been able to prove the existence of and then kill Nessie, making it clear why we've never seen the mythical beast up north in Scotland. Why? All along Nessie was acting as a god in a land torn between being based on Norse or Scot mythology.

Now I think about it; Gods Will Fall could be a play on British imperialism. You are a band of Vikings venturing into a land of evil creatures passing themselves off as your gods. They have been keeping humanity down for too long, and it's time for man to rise and overthrow those once deified. 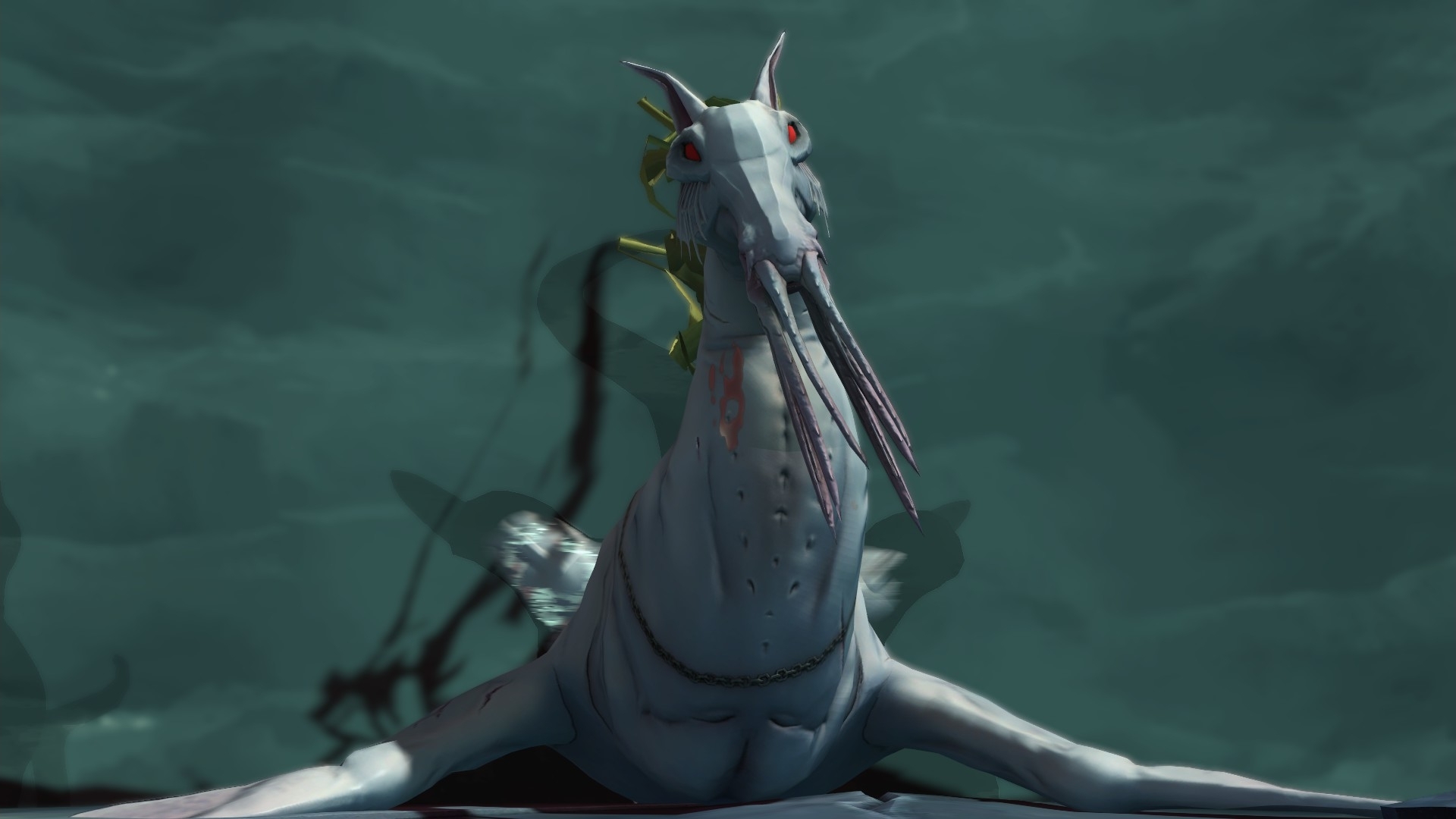 I've already covered a fair amount on Gods Will Fall when I previewed the game around one and a half months ago. Back then, having had the chance to fight through five of the dungeons and face off against five of the monsters, I was feeling optimistic about the game. The more I've played, the more I've found that my initial impressions were correct, though I do have a few things that have popped into my head since then.

But what is Gods Will Fall? At a push, I'd describe this as a dungeon-crawler with a close eye on soulslike games. It's been watching them, seeing what makes them popular and, unlike many, it's come to the right conclusion. Focusing on tactical combat, you'll find yourself challenged by both the regular creatures and the eventual fights with the 'gods'.

These 'gods' are massive creatures that tower above your regular warrior. They should seem overwhelming at first. They likely will be, but it's all about thinking your way through. That's what I really enjoy about Gods Will Fall. That and the fact that it's using a great mixture of procedural generation and directed content to ensure the game never feels aimless and meandering. Putting it simply, the difficulty is procedurally generated, so each time you launch the game, you'll find it slightly different - even though the levels are the same.

I don't know exactly how many difficulty levels, of sorts, there is in the game. I'm just going to assume there are three difficulty levels. What happens is that each time you start a new game, each dungeon's difficulty is selected. I imagine this is balanced out to ensure you have so many easy, so many at normal and the rest at hard. You're just going to have to hope you manage to find one of the easier ones first, letting you build up your small group of surviving warriors. 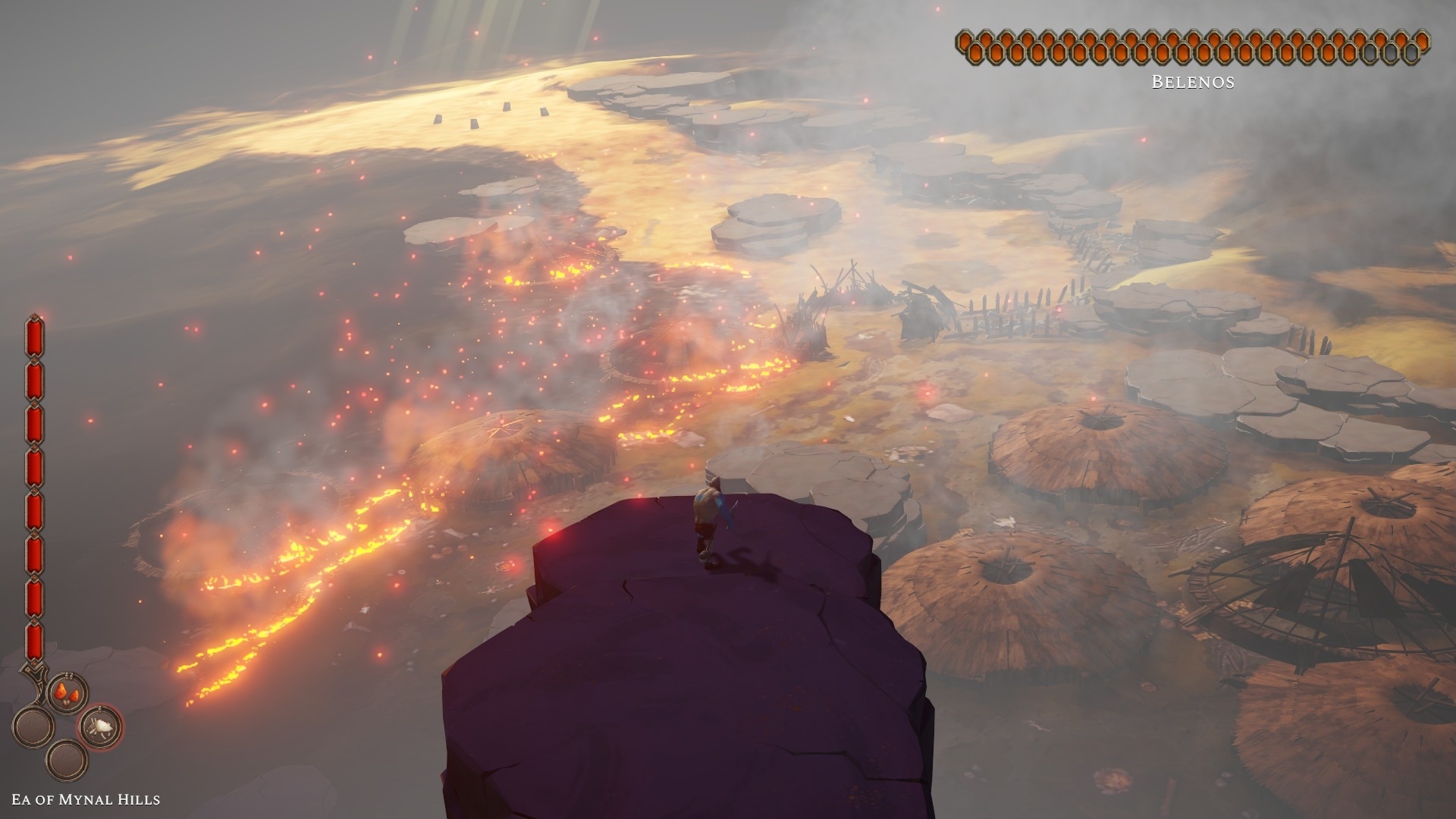 Once you enter a dungeon, you can't exit. You can also only enter the dungeon with one of the eight warriors in your party. Should they fail, most of the time they're just held captive, letting you enter with another warrior and hopefully succeed, letting you pull out the original warrior with your success. There is also a chance of you dying; this seems to mostly happen if you're caught by a trap, such as a giant stone pillar crushing you.

Once you succeed in killing the boss of a dungeon, you'll be rewarded with weapons equivalent to the dungeon's difficulty. You'll be able to equip a few of your warriors, giving them a boost for the next fight. You'll also find yourself rewarded with some consumable items, some of which can also be collected as they're strewn around the floor of these dungeons, with each success also boosting the stats (vigour/health, strength, skills, etc) of some of your characters. I've also found other random boosts, such as rescuing an extra warrior that somehow survived the shipwreck but found themselves captured, giving you somebody else above the original eight in your party.

This randomisation of difficulty and rewards is what helps to keep the game interesting. You never know if the next dungeon you enter will be an incredible challenge, even the regular monsters feeling overwhelming. As the difficulty of a dungeon is increased, not only will you find an increased number and variety of monsters, you may also find that the layout of the dungeon has changed. Multiple paths have been created, so you're not always going to know what to expect.

As you progress, there's the risk of you getting overconfident. I had one warrior, Ea, who became an absolute monster. He'd killed three gods, had a good weapon, loads of skills. He was a monster. He was a god. He was fatigued. Naturally, after having fought through multiple dungeons, he needed a rest. The game actively wants you to mix it up, which is understandable. Use the same character too many times, and you'll see a significant vigour and strength reduction, the fights taking their toll, the character needs to sit the next fight or two out. 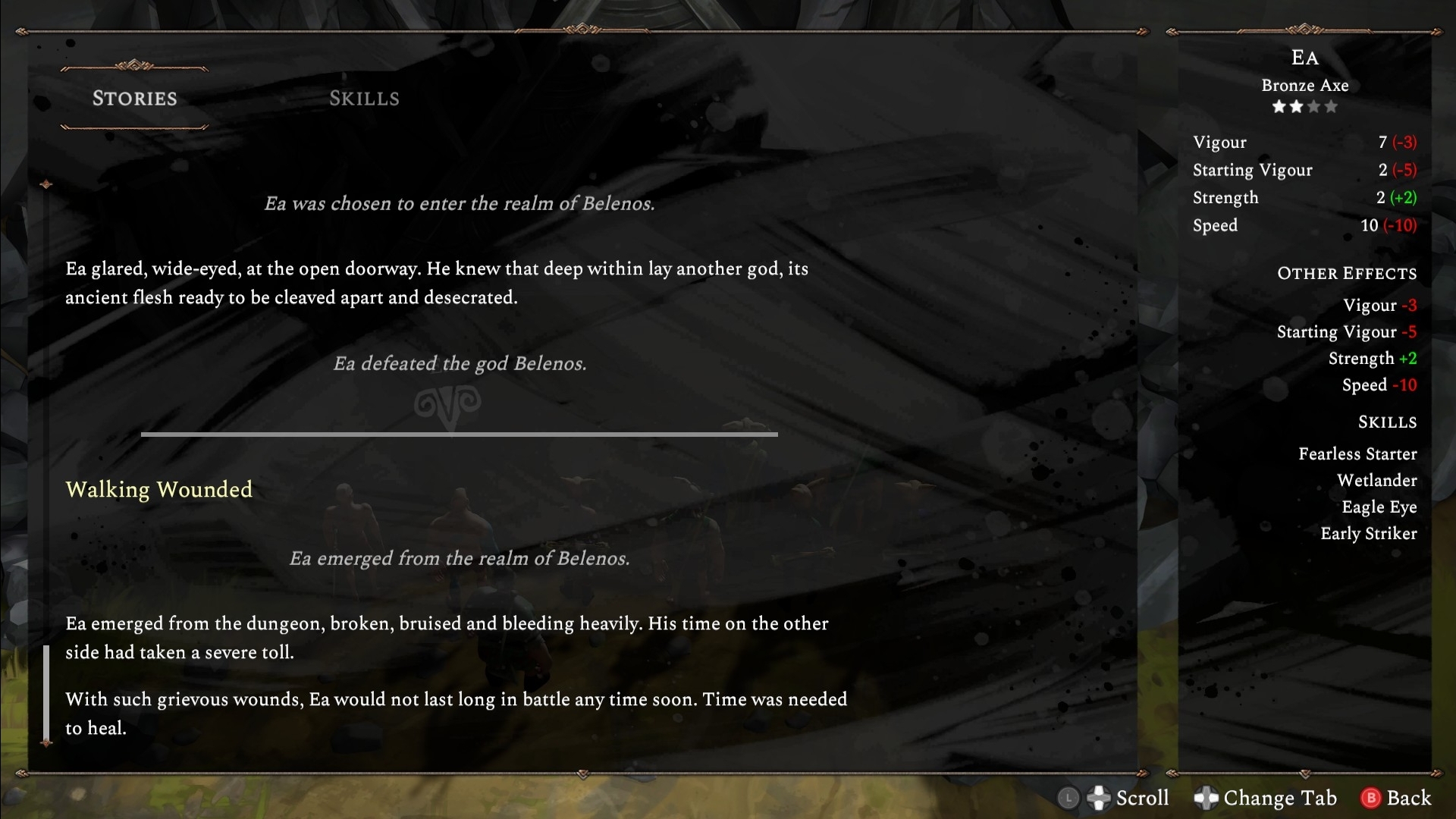 Everything seems to play into making Gods Will Fall a great title for emergent storytelling. Your best warrior is tired out. You send in another of your proven warriors, one who rescued someone from a dungeon, increasing your party size and giving you that extra confidence. The fight seems to be going well; you're slaughtering enemies on your way through, your spear making light work of all who oppose you. You're over-confident, blazing through but you forgot to watch the environment, a trap is laid, two giant stone pillars roll towards you, crushing you. Those outside hear your screams. The warrior you rescued follows you in, killing the god, but this victory is a pyrrhic one since this time there was no chance to pull out the original fallen warrior.

Elements like this are enhanced by a game that I genuinely think is stunning. This isn't a title that's focusing on the smallest of details, but somehow, they're still put across. The beautiful, brushed art style lets this stand out amongst the many similar soulslike titles out there. There's so much to praise. The environments are grand and imposing, always varied. The monsters are well designed and very representative of the areas. Everything manages to be attractive and compelling through simplicity. Even the overworld, which connects the dungeons, has nice little features to look at and draw you in.

Some of these features are also more than just aesthetic. While you won't be fighting on the overworld, you will find a few things to interact with or look at. One such thing is a well, always better to interact with later on. You can throw items down this well in one game and then, in your next, you can pull these items up. It's a lovely little roguelike feature, allowing you to pass forward items to help your new crew of warriors out. Particularly useful if, on a later save, you're unlucky enough to pick a difficult dungeon right at the start and want to push through. 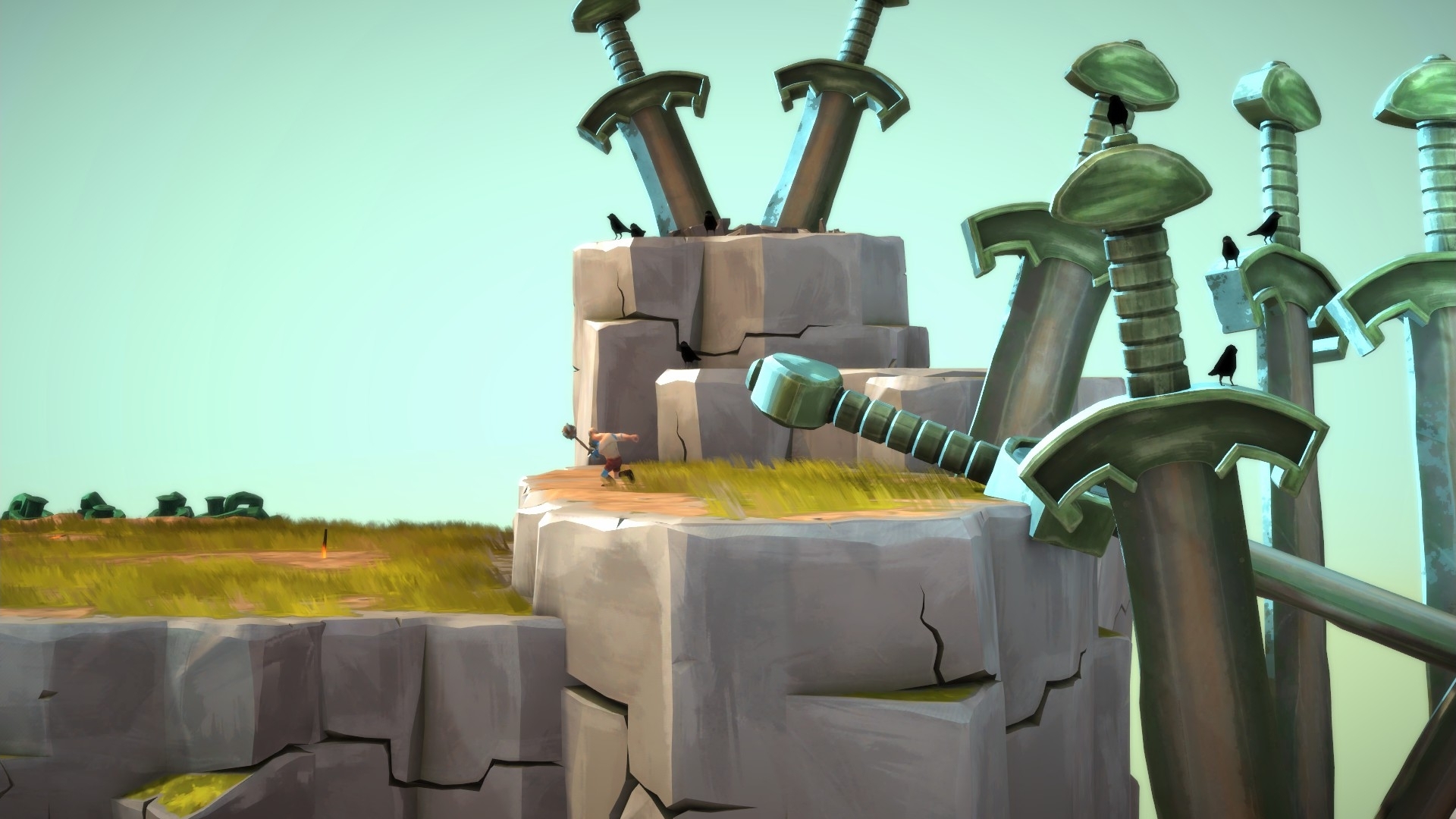 I do have a lot of praise for Gods Will Fall. It's a very well designed and developed game, and it genuinely is fun to play, though I do have some issues, mostly technical. There are a few problems I've encountered. On occasion the game will grind to a halt, freezing for a few seconds, before starting up again. Other times I've had the character freeze completely. Enemies keep moving, but I've just disappeared - though, for some reason, I was still able to activate a consumable. The only way to progress was to abandon the warrior or restart the game, resulting in my activate character being lost in the dungeon and me having to send another in. I've also encountered other issues like enemies falling into the scenery. Fortunately, all problems have been few and far between.

I do have another complaint. While I like the well on the overworld, the rest of it feels quite empty. There are a few things to look at, but how empty it feels is made all the more obvious when the Valiant Edition (costing £6 extra) reportedly features more things to see and do on the overworld. It's not a key element, and I may be missing some things, but it was glaring.

Still, I like Gods Will Fall. It looks good, sounds good and it plays well, despite the few technical difficulties. It's challenging enough without going too far. The mixture of procedural generation and crafted content gives it replay value, particularly if you want to explore each dungeon's different difficulties and see what each level truly has to offer. Best of all, it's reasonably priced, coming in at £20 or your local equivalent on Steam.

Gods Will Fall is a well-focused action-oriented dungeon-crawling soulslike with procedural generation. Only the procedural generation is on the difficulty, allowing for developers Clever Beans to have handcrafted each dungeon in a stunning hand-brushed art style and have each playthrough feel that bit different, as the increased difficulty of a particular dungeon brings new creatures, paths, and opportunities. While not perfect, some things like the rather barren overworld as well as some bugs standing out, the character development, emergent storytelling and tight combat does more than enough to let this stand out.